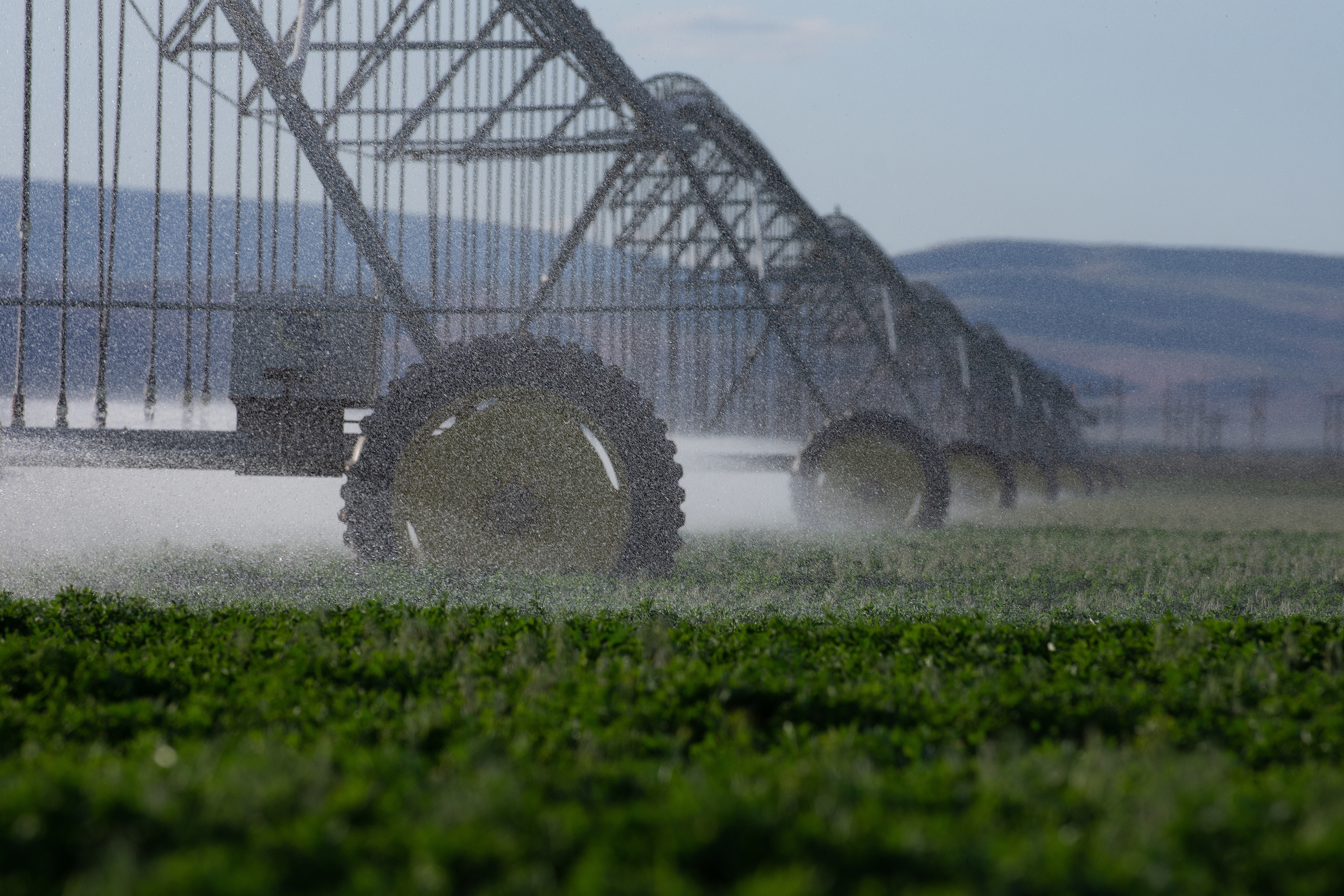 It’s good to be writing again after several weeks off, and there is no dearth of news. Over the next few weeks, I’m planning to write more about the lingering impacts of drought, the Colorado River, the race for a lithium supply chain, and what the devastating fires this summer left behind.

We talk a lot about precipitation, and for good reason. In many places across the West, our water supplies depend on runoff from snowpack. But what we don’t talk about as often is the movement of water in the other direction — how water cycles from land to the atmosphere.

Yet understanding that movement is critical to managing water supplies and understanding how much water we are consuming. Scientists refer to the movement as evapotranspiration, or ET. It describes how much water evaporates from the earth’s surface and transpires from plants. That might sound very technical and dry, but evapotranspiration is a crucial part of the water cycle.

The problem: There is a big gap in this data.

Evaluating evapotranspiration on the ground is costly and the data is not always accessible for many water users. That can leave water users and managers at a loss. Simply put, “you can’t manage what you don’t measure.” The saying, in this case, is apt, said Justin Huntington, a research professor of hydrology at the Desert Research Institute.

For years, Huntington and a team of researchers have worked to fill that gap, turning to satellite data, models and weather variables to show evaporation data at a granular level — to about a quarter-acre. And last Thursday, they launched the data on an online platform, OpenET.

That’s a big deal, Huntington said in an interview, because it opens up evapotranspiration data to all users, making it readily accessible and affordable. It also marks a regional effort to better manage water resources amid an ongoing drought and a changing climate. OpenET, which is built on Google Earth Engine, provides near real-time evapotranspiration data in 17 Western states.

Forrest Melton, a program scientist for the NASA Western Water Applications Office, said in a press release that it closes “one of the biggest data gaps” in how Western water is managed.

“This easy-to-use online platform provides scientifically robust data that are invaluable for water management at all scales, from an individual agricultural field to an entire river basin,” he said.

The project, led by DRI, the Environmental Defense Fund, NASA and HabitatSeven (a firm that builds data-driven web applications focused on the environment), has already gained traction among water managers, and regulators in the West, including in Nevada and the Colorado River Basin. The OpenET website lists a number of case studies across the West, ranging from the Sacramento-San Joaquin Delta to the Navajo Nation and the Salt River Project in Arizona.

The Southern Nevada Water Authority has used OpenET to understand irrigation practices along the Muddy River, which is a tributary to the Colorado River. And Adam Sullivan, Nevada’s top water regulator, said earlier this year that his agency “strongly supports” the initiative.

“Public access to these data will be increasingly vital to support water users and responsible water management needs into the future,” Sullivan said when the legislation was introduced.

When it rains, it pours: On Sunday and Monday, the Reno-Tahoe Airport recorded 2.92 inches of rainfall, the highest ever for October. To put that in perspective, that’s nearly as much water as the Reno airport recorded during the last year, according to the National Weather Service. That staggering statistic illuminates the intensity of the recent “bomb cyclone” that hit eastern California and Western Nevada over the weekend. Dan McEvoy, a climatologist at the Western Regional Climate Center, said the precipitation “couldn’t have come at a better time.” The big early storm helped improve soil moisture. That’s important because when soils are too dry, they can make runoff from snowmelt inefficient. And runoff forms the basis for much of our water supply. But this one storm alone did not end the drought. Although the storm provided short-term relief, McEvoy said more precipitation this winter will be needed to pull the region from drought.

Do we need a bigger “parachute” on the Colorado River? Earlier this week, climate scientist Brad Udall tweeted a thread of data showing combined storage at Lake Mead and Lake Powell, the two largest reservoirs in the Colorado River Basin, a watershed that is relied upon by about 40 million people in the Southwest, including Las Vegas. The result was alarming, though not entirely surprising to those who have been following the situation. It shows the precipitous drop in water storage across the system over the last two decades. Yes, there are plans in place to reduce demands if Lake Mead drops even lower. But Udall, at the end of his thread, raises an important point about their adequacy: “If these demand reductions plans are the equivalent of a parachute, there are legitimate questions about (a) the size of the parachute and (b) why are we deploying it so close to the ground given all that has transpired over the last 22 years.”

Breaking ground on a pipeline in Northern Nevada: The Tahoe Reno Industrial Center and data center company Switch broke ground on a pipeline that Gov. Steve Sisolak described as a “win-win” in a statement on Tuesday. The pipeline, approved by local governments in the Reno area, will bring treated municipal wastewater to the nearby industrial park. The project has long been in the works but hit several roadblocks along the way, including criticism about the state contributing water rights to the project and a lawsuit with a property owner after a water board for the industrial park tried to exercise eminent domain. But local water managers have cast the project as a common-sense way to reuse limited water supplies. By sending treated wastewater to the industrial park, businesses can reduce their demand for additional water supplies. At the same time, cities can reduce their short-term expenses of treating wastewater. "This important project checks the box on several of our major environmental objectives," John Enloe, a water resources manager with the Truckee Meadows Water Authority, said in a statement on Tuesday. "This has proven a very innovative solution to an otherwise complex set of needs in the region.”

Southwest Gas, Wall Street and Carson City: As of Wednesday morning, investor Carl Icahn had made an unsolicited bid to purchase outstanding shares of Southwest Gas, which is based in Las Vegas and serves customers throughout the state. Bloomberg News’ Josh Saul has the story. At the center of Icahn’s dispute with the natural gas utility is its plans to purchase a gas pipeline company for about $2 billion from Virginia-based Dominion Energy, which has been shedding fossil fuel assets. There is a lot to write about the purchase and Icahn’s criticisms of the company. In an open letter on Oct. 5, Icahn criticized Southwest Gas’ leadership for errors and what he describes as a frayed relationship with state regulators. Southwest Gas issued a statement in response and Icahn issued a rebuttal. At the same time, Southwest Gas continues to face pressure in Nevada to plan for a transition away from natural gas. On Friday, several groups, including Southwest Gas, filed comments with Nevada utility regulators as part of an investigation into the future of natural gas. I’ll be writing more about all of this soon.

Nevada became the 16th state to adopt vehicle standards to reduce emissions in the transportation sector. The Las Vegas Sun’s Jessica Hill has more on the story.

“The Bureau of Land Management is evaluating three large-scale solar projects that could turn the southern Nevada desert into a major green energy hub,” E&E News’ Scott Streater writes. The projects would straddle the border between Nye County and Clark County. Kevin Emmerich, co-founder of Basin and Range Watch, told E&E News that he is concerned about the wildlife impacts of additional renewable development in the sensitive desert ecosystem.