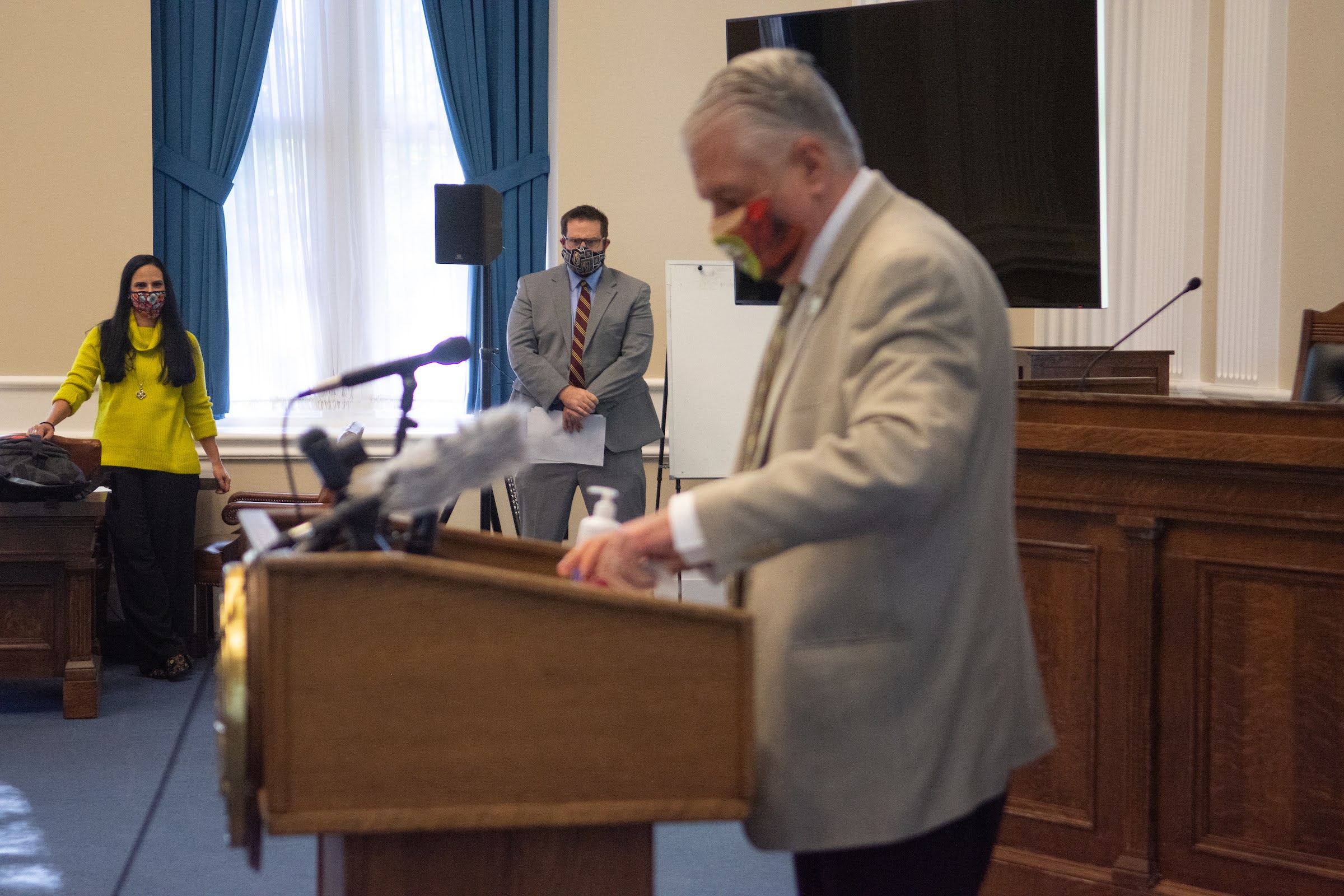 A week ago, Caleb Cage, Nevada’s COVID-19 response director, came home from work fatigued. At first, he didn’t think anything of it. Who, after all, isn’t tired after work on a Friday?

But he awoke the next morning feverish, fatigued and with a cough. A headache settled in by the evening. At first he was convinced it was the lingering effects of a flu shot he had gotten earlier in the week. As a precaution, he alerted his supervisor, the governor’s chief of staff, Michelle White, of his symptoms and made an appointment to get tested at his local CVS the next day.

A quick self-swab test at the pharmacy on Sunday confirmed what he had suspected, that he had contracted the virus he was tasked with fighting.

In his role, Cage has been charged since March with helping to coordinate the state’s response to the ongoing coronavirus pandemic, including chairing the state’s COVID-19 Mitigation and Management Task Force, which meets weekly to review action plans for counties at elevated risk for the spread of the virus. Now, he was confronted with the virus firsthand.

“Of course, I work on kind of the front lines of this, if you will, at least from a policy side and I was thinking how frustrating — might be a word— it would be if I had introduced this and gotten other people sick, if I had gotten the governor sick, if I got the chief of staff sick, people who are making decisions that affect the whole state on a daily basis. Those thoughts went through my mind,” Cage said in an interview with The Nevada Independent on Friday.

Gov. Steve Sisolak’s office on Tuesday announced that a staff member based in the Capitol Office had received a positive test for COVID-19 after developing symptoms over the weekend. Cage, in the interview with the Independent, identified himself as that individual and shared his personal experience with COVID-19 in an effort to help the public understand the importance of remaining vigilant to prevent its spread.

“It has added contours and contexts that I would not have ever had had I not had it. Of course I’ve been working and taking it very seriously and working to ensure that I don’t get it,” Cage said. “This is a highly communicable virus that can spread very easily, and even if you are doing everything that you possibly can to prevent it and to make sure people around you are preventing it, you can still become infected with it.”

Sisolak, who has been working from Southern Nevada, has not had in-person contact with Cage since mid-September and announced he tested negative for the virus on Wednesday. White also tested negative for the virus and said she is aware of no positive results among the governor's Capitol staff, though they all remain in isolation for the remainder of the 14-day quarantine period.

For both Cage and White, the experience has offered a window into how the system they know so well at a professional level — including the state’s testing and contact tracing infrastructure — operates in a personal capacity.

“It’s never good to see that you’ve potentially been exposed, but from this perspective of working on this response for this long, and knowing all the work that went into this … it was good to see it in action,” White said.

The process for Cage started off as it has for so many others — informally letting his workplace, his family and his other close contacts know he was experiencing symptoms consistent with COVID-19.

“Once I was able to start processing it in terms of that, I was thinking about, well, who else in my life have I been around? I have three little kids, and I know they aren't as susceptible, fortunately, but we're in our home together, of course my wife, my work colleagues, other people in my life who are very important to me, my father,” Cage said.

Cage described a feeling of guilt about the possibility that he had unknowingly exposed others to the virus even though he had taken all of the appropriate precautions. But he said it was important to let the people in his life know as soon as possible so they could take the appropriate steps to protect themselves and those around them.

“There are people who we care about greatly who we have some limited contact with and calling people that you care about and saying, ‘Hey, I, at the very least, am disrupting your life with having to go get a test and the same uncertainty that I'm feeling about all of this, and at worst I'm worse I'm introducing a virus during a pandemic to you,’ that was challenging,” Cage said. “But you got to pull the Band-Aid. I mean, it's not going to do anybody any more favors to not know.”

Cage also thought about how he might have contracted the disease. But like many others in his shoes, he doesn’t know. He goes to work in the governor’s office where they wear masks, use hand sanitizer and practice social distancing. He runs limited errands, such as getting gas. He’s a student at the University of Nevada, Reno where he takes one distance course and one in-person course, which he said did coincide with his exposure period.

“You just don’t know. This is why we wash our hands. This is why we wear masks,” Cage said. “There was nothing that was out of the ordinary and there was no time where I was not taking the precautions and the measures and the recommendations, either [Centers for Disease Control and Prevention] guidelines or state guidelines, that would have contributed to this.”

While waiting for Cage’s test results, White made the decision to transfer the Capitol staff to work-from-home status on Monday.

Cage said he received the results of his molecular PCR test on Tuesday and within the span of about an hour was contacted by a disease investigator with the Washoe County Health District, who walked him through the interview process. Even though he knew what to expect from the case investigation, he still described it as “challenging,” noting how difficult it was to remember who he had been in contact with, including how close and for how long.

But what surprised him was how quickly he started hearing from people that they had already been contacted to let them know of the possible exposure.

“This is kind of nerdy, but we were kind of in awe of how quickly and how smoothly it all went, starting at that point,” Cage said.

The governor’s office also got to test drive the COVID-19 Trace App, which has been publicly available since August but until this week had not had any reported exposures. Cage was either the first or second person to have his contacts traced using the app, which now has had two exposures recorded and 12 contacts notified as of Friday.

White, one of those close contacts, said the exposure popped up on her app shortly before she received a call from the contact tracer.

“I don't think there's been a day in the last seven months where we haven't used the term contact tracing, but to get a contact tracing call myself was a really bizarre experience, but one that made me immensely proud of all the work that's gone into building this structure,” White said.

In a time when government officials have not always been forthcoming about the virus, Cage said it was important for him to share his experience with COVID-19 to show that the virus is real “even if you’re making as many considerations and accommodations as you possibly can.”

Cage said he is feeling better than he was over the weekend and is grateful that the virus is not affecting him more severely. But he noted the more than 210,000 people across the U.S. who have died from the virus, calling COVID-19 “an extraordinary cause of death” and saying that to minimize its impact is “not only disrespectful to people who are dealing with this, to the most vulnerable, to people who represent demographics that are affected at a higher rate for various reasons … but it’s completely counter to the effort we should have from a national perspective.”

“We have a system in place and a good approach to this here,” Cage said, “and the more we can get people to take it seriously, I think the quicker we will be able to put all of this behind us.”