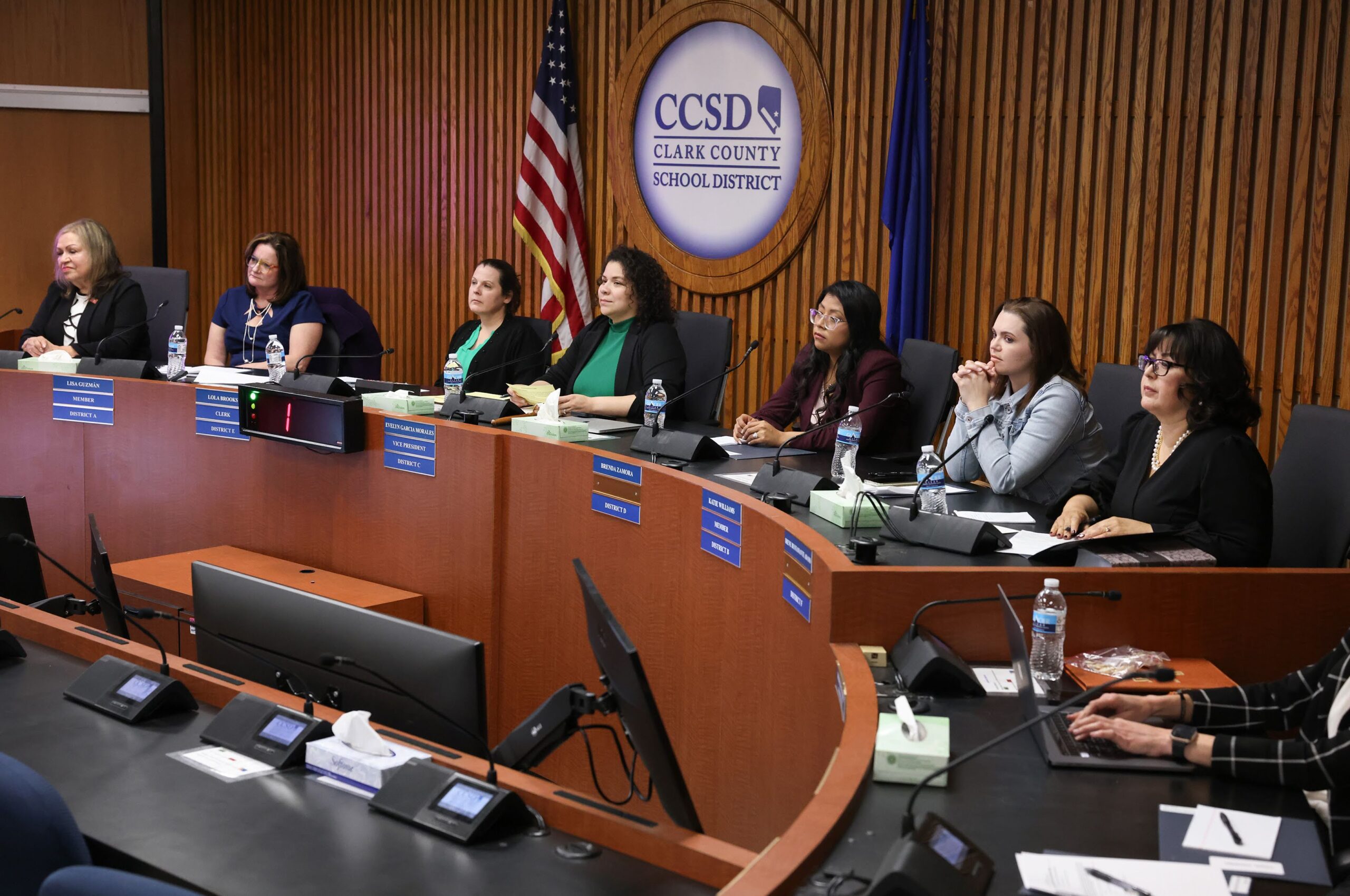 The Clark and Washoe County school boards are starting the year with new trustees and leaders who hope to help their districts navigate school safety and staff recruitment and retention challenges.

The Clark County School Board held a swearing-in ceremony Jan. 3 packed with supporters and family members of newly elected Trustees Brenda Zamora and Irene Bustamante Adams as well as returning Trustee Linda Cavazos, who has been on the board since she was appointed in 2017.

Zamora and Bustamante Adams defeated  former board president Irene Cepeda and former Trustee Danielle Ford, respectively, as voters opted for changes after periods of board dysfunction. The board continues to be all female-led and now has four Latina trustees who serve the district’s students. Nearly half of the students in the district identify as Hispanic.

Bustamante Adams, Cavazos and Zamora thanked their families and supporters who joined them at the swearing-in ceremony.

“I come from a mixed-status home, so that says a lot of who I am and where I'm coming from, and I am so proud to be here,” Zamora said.

Meanwhile, the Washoe County School Board selected at its Tuesday meeting for Smith and Trustee Diane Nicolet to serve as its president and vice president, respectively, in unanimous votes. Rodriguez and Trustee Jeff Church were both nominated for clerk, but the board ultimately chose Rodriguez in a 5-2 vote with Church and Westlake opposed.

The trustees start their jobs as both school districts  face various challenges, including school safety and recruitment and retention issues for teachers and staff.

Last year, a teen accused of attacking a Las Vegas high school teacher was indicted with 10 felony counts, including sexual assault. A teacher at a Sparks middle school was injured during an altercation with a student just before the Washoe County School District’s winter break.

Part of Westlake’s campaign included pushing for safety officers at every school to curb violence and protect teachers and students, though she said she’s open to scaling back the officer presence once the district gets a handle on the issue.

“It is worse not to do anything than to try something and fail,” she said. “I really think this board is going to try to address this and make a difference.”

Nevada’s two largest school districts are also struggling with teacher vacancies as educators continue to leave their jobs citing dissatisfaction with pay, burnout and lack of support. Autumn Tampa, a language and literacy specialist with the Clark County School District, told trustees last week they also need to create training opportunities for school support staff to grow in their career or move into new positions.

The board’s reputation among the community has also been shaky at times such as in 2021 when the board fired, and later rehired, Superintendent Jesus Jara.

Last year, board leadership called out some trustees including Trustee Katie Williams and Cavazos for unprofessional, “out of control” tweets in which they insulted each other or the superintendent. Community members also asked trustees to amend or rescind the board’s public comment policy, adopted last August, that some said limits participation.

All three trustees sworn in last week said they want to work on restoring the community’s trust in the board.

“We want to make sure that this is a collaborative effort of the community, of the Legislature, of our parents and our educators,” Cavazos said.

School board members will have the opportunity this year to work with state leaders who make policy and funding decisions that could affect their students and staff. Bustamante Adams, a former Nevada assemblywoman, said the board is meeting with legislators and building those relationships ahead of the start of the legislative session in February.

“Some legislators have been very forthcoming in sharing what their ideas were, and wanting to (know) how that would work for CCSD, ‘is that something that would help or hinder,’ and so those conversations have already started,” she said.

Update: Jan. 10, 2023 at 3:30 p.m. This article was updated to add Washoe County School Board officer appointments from the board’s Jan. 10 meeting.

Correction: Jan. 11, 2023 at 11:24 a.m. A previous version of this article misstated the number of Latina trustees on the board. The correct number is four.