November election could shift majority on the Clark County school board 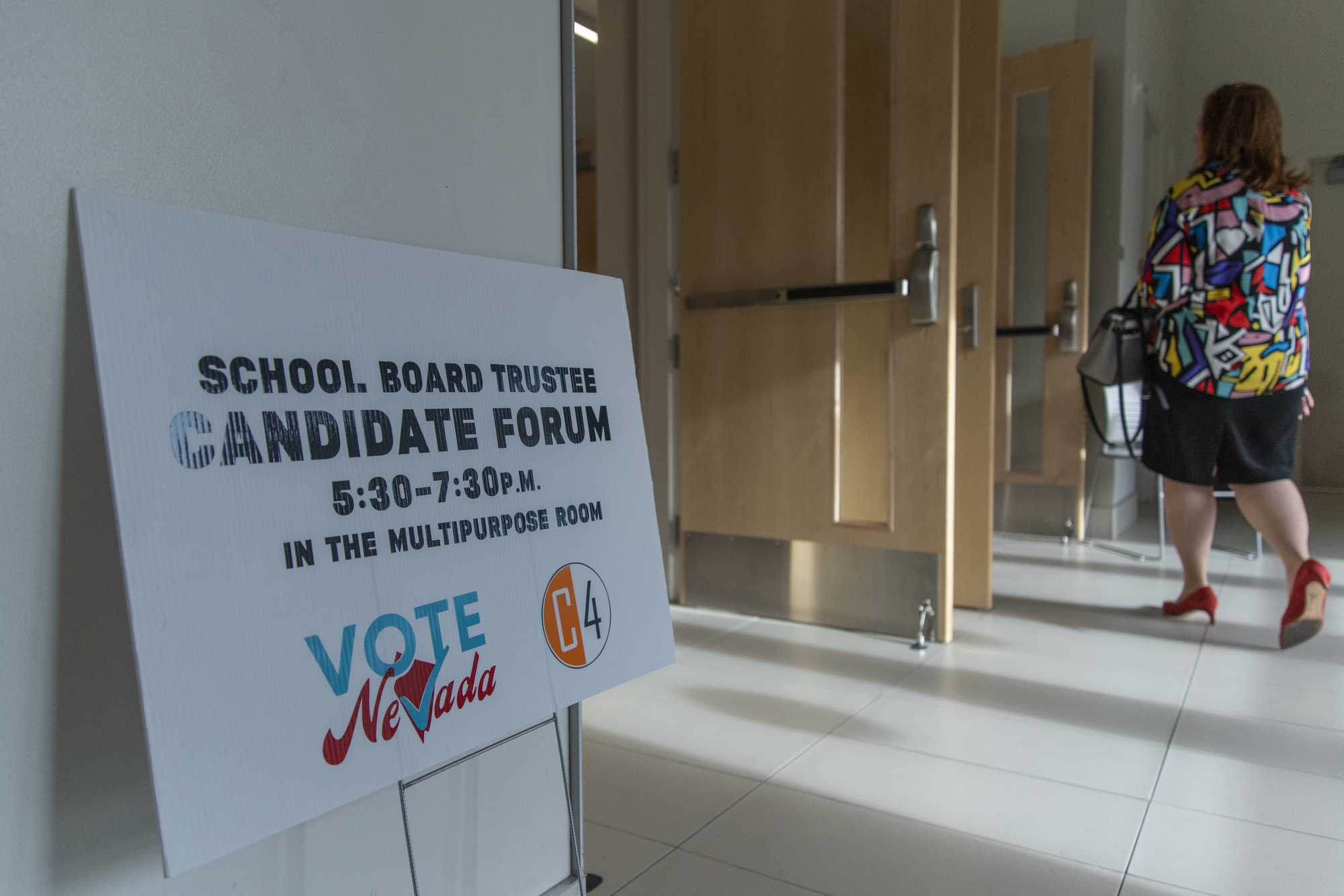 On the seven-member Clark County School Board, all it takes is four votes to get items passed.

That 4-3 split vote is exactly how the board advanced a glowing evaluation, contract extension and raise for Superintendent Jesus Jara, despite outspoken objections from community members disappointed in Jara’s performance as head of the 300,000-student district and who believed the board was rushing to finalize his future with the district ahead of the November general election.

The Oct. 5 board vote came nearly a year after a similarly divided board voted to terminate Jara’s contract, only to reinstate him in another 4-3 vote weeks later.

The November election, however, could change the board’s paradigm. The District D, F and G seats — held by Board President Irene Cepeda and Trustees Danielle Ford and Linda Cavazos, respectively — are up for grabs this cycle.

Cepeda is part of the four-vote bloc alongside the board’s Vice President Evelyn Garcia Morales, Clerk Lola Brooks and Trustee Katie Williams that have voted to maintain the status quo on district leadership.

If Cepeda were to lose her seat to challenger Brenda Zamora, a new majority could be established. But that all depends on whether Cavazos and Ford can maintain their seats.

That’s what Ford — a vocal critic of district leadership — is counting on.

“Let’s hope that in a month from now, we have four trustees elected to the school board … who are visionaries, who want to try new things, who know that we're on the bottom of the lists and are tired of being there, and who want to make innovative changes,” Ford said during a press conference following the Oct. 5 school board meeting where Jara’s contract was extended.

Ford’s call comes as the nation’s fifth-largest school district continues to struggle with issues exacerbated during the COVID-19 pandemic, such as poor student academic performance and challenges with teacher recruitment and retention.

The school district saw students’ math and English Language Arts skills suffer through the pandemic years, with drops in proficiency rates in the upper elementary grades, middle school and 11th grade, according to data from standardized tests from the past three school years. Nevada students, a majority of whom reside in Clark County, had the lowest average composite score on the 2022 ACT college admission test among all 50 states and Washington, D.C.

While the ACT notes that states such as Nevada tend to have lower composite scores because they make all students take the exam as part of their graduation requirements, the average composite score still ranks at the bottom of the other five states with a similar requirement.

The district also had almost 1,400 teacher vacancies just before the start of this school year, higher than the shortage it faced around the same time in previous years.

Zamora said she supports making major changes to the district, including removing Jara, as a strategy to retain teachers who have stated their intentions to resign if Jara’s contract was extended.

“Everyone should be concerned about that,” Zamora said. “We need to focus on keeping them, because we can't afford for them to leave.”

The possibility of Zamora replacing Cepeda on the board isn’t too far-fetched. During the primary election, Cepeda narrowly held first place in the District D race by securing almost 27 percent of the vote. She was closely followed by her challenger, Zamora – only behind Cepeda by less than 2 percentage points – and Steven Conger, who was eliminated from the race after securing less than 25 percent of the vote. School board trustee races are nonpartisan (meaning no political party affiliation is listed on the ballot), with the top two vote-getters in the primary advancing to the general election, unless a candidate wins a majority of votes outright in the primary.

The District D incumbent is counting on the support of influential groups such as the Vegas Chamber and the Clark County Education Association, the bargaining unit for Clark County teachers.

“We're looking for candidates that can govern and be focused around student outcomes, and be supportive of frontline educators and other staff and not necessarily engaged in internal politics or the drama associated with that,” CCEA Executive Director John Vellardita said. “We believe that Irene Cepeda is the appropriate candidate to continue in that direction.”

In an interview with The Nevada Independent, Cepeda said she thinks the board has done good work, and as board president, she thinks she’s been “firm and steadfast” about discussing student outcomes at least once in every meeting. She considered that one of her successes in her first term as a trustee, but acknowledged there’s still room for improvement.

“One of the number one indicators of a highly effective board is that you're talking about student outcomes, at least 50 percent of the time,” Cepeda said. “Are we close to 50? Absolutely not, but it's better than 0 percent from (2021).”

Cepeda is the only incumbent whom CCEA is supporting this election cycle. The union has backed former state lawmaker Irene Bustamante Adams – who’s running against Ford in the District F race – because it believes she will be an asset to the board given her legislative experience and understanding of school district education needs, and Greg Wieman – who’s running against Cavazos in the District G race — because of the perspective he would bring to the board as a longtime educator and former Nevada school district superintendent, Vellardita said.

But whether the board’s majority gets flipped also depends on whether Ford and Cavazos are able to fend off Bustamante Adams and Wieman.

In an interview, Wieman criticized the board and Jara for the district’s student performance issues, and said during this campaign, he’s heard from constituents who are “disgusted” with both sides and want change. If elected, Wieman said he’s willing to work with other board members and Jara to restore credibility to the district.

“It’s going to be tough, especially if they take a lot of the decisions out of my hands before I've even seen it,” Wieman said, referring to the board’s decisions to evaluate the superintendent and extend his contract before the November election. Wieman also expressed concerns about the board’s recent decision to support changing opt-in requirements to opt-out for sexual education instruction as part of its 2023 legislative priorities.

Bustamante Adams, the deputy director and chief strategy officer for Workforce Connections, declined to comment on the board’s recent actions extending Jara. During her campaign, though, Bustamante Adams said she’s heard that the board has lost the trust of the community, including business leaders. She thinks her experience as a state lawmaker (serving in the Assembly from 2011 to 2017) can help mend relationships.

“What I was known for, and my credibility in the Legislature was to work well with people who had different opinions than I did, and figure out our common ground to find the solutions to move forward,” Bustamante Adams said. “I think that collaboration is going to be key in order for us to get through some of these issues that we have.”

As for why CCEA doesn’t support the incumbents, Vellardita said Ford isn’t fit to govern, and that Cavazos’ actions speak louder than her comments in school board meetings or to educators.

Both Ford and Cavazos voted this summer against raising the starting salary for Clark County educators, which mostly affected new or recently hired teachers, and retention bonuses for veteran teachers.

During that June 9 board meeting, Ford said she took issue with the suspension of a program that allowed veteran teachers to buy out their 30th year of service with their accrued sick leave as part of the negotiated salary raises and bonuses. Cavazos said she wasn’t against the salary raise, but rather wanted to show her support for veteran teachers who felt they were getting the short end of the stick. She also knew the proposal had enough votes to pass without her.

“I made it very clear before I voted no that I could not ignore the veteran teachers who had coached and mentored and gotten us through the pandemic,” she said. “So this was, to me, a slap in the face to our veteran teachers.”

Opposite CCEA, the National Education Association of Southern Nevada, a separate Clark County teacher union group, has chosen to back Ford, Cavazos and Zamora.

“In CCSD, we have watched what happens with a majority of the board that isn't fully aware of what's really going on in our schools,” said Vicki Kreidel, the group’s president, in a statement. “We believe the three candidates we chose will help move this district forward.”

Kreidel called Cavazos a “consistent ally” to Clark County educators, and referred to Ford as an “education warrior.”

But Kreidel said her union’s members have been extremely disappointed in Cepeda, whom NEA-SN endorsed in the last election.

“We had high hopes that she’d listen and communicate,” Kreidel said. “That has not been the case.”

Cepeda and Zamora are almost evenly matched in fundraising totals since the beginning of the year. Cepeda has raised $13,400, almost $500 more than Zamora.

Two of Cepeda’s notable donations from the third quarter, which ran from July through September, include $5,000 from CCEA, and $250 from Carolyn Edwards, a former Clark County School Board member. Zamora received $2,500 from the Be the Change PAC, led by former Clark County Commissioner Chris Giunchigliani, and $525 from a political action committee affiliated with the local plumbers’ union.

Bustamante Adams has raised about $54,000 since the beginning of the year, significantly greater than Ford’s $12,000 in funds raised. Two of Bustamante Adams’ most notable donations from the third quarter include $5,000 from CCEA, and $1,000 from R&R Partners CEO Billy Vassiliadis.

Ford’s notable donations include $6,000 from the Be the Change PAC, and $1,000 from Sylvia Lazos, a UNLV professor and outspoken education advocate.

Cavazos has raised a little more than $29,000 since January, more than double the amount raised by Wieman, $13,300. Wieman raised that amount in the third quarter. His notable donations include $10,000 from CCEA and $2,500 from the Vegas Chamber.

Cavazos’ notable donations include $4,855 from Clark County Commissioner Tick Segerblom, and $1,030 from Karla Jurvetson, a California physician, philanthropist, and large-sum donor to Democratic candidates and PACs.