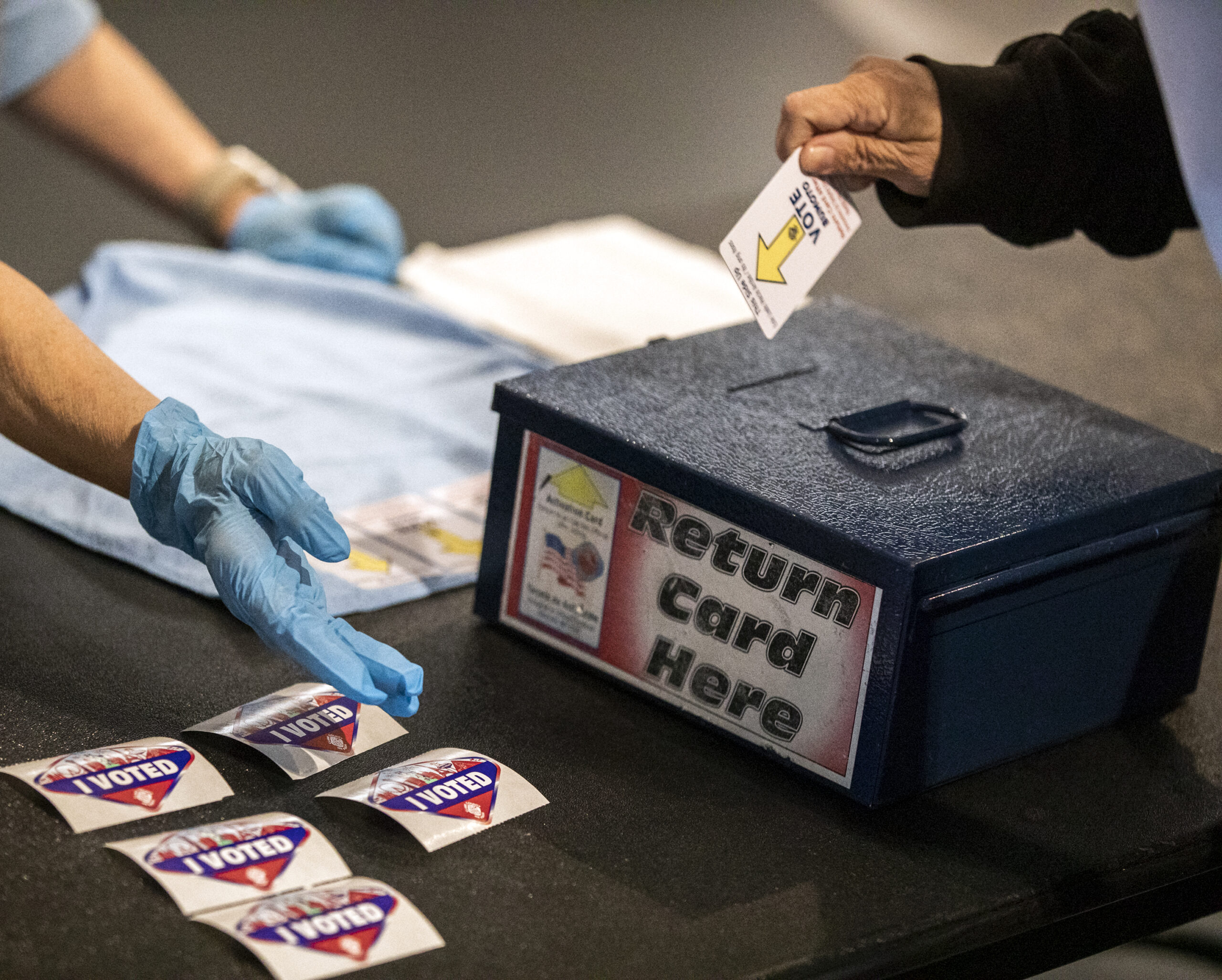 In a last-chance appeal before the Nevada Supreme Court, opponents of a proposed ballot question calling for adopting open primaries and ranked-choice voting in Nevada elections argued the initiative is too broad and should not be allowed to proceed to the ballot.

Though the initiative backers say they have gathered enough signatures to qualify the petition for the November ballot, justices on Nevada’s highest court could essentially strike the measure down if they side with Nathan Helton, a Democratic Party-aligned Churchill County voter who filed the lawsuit opposing the initiative.

If approved by a majority of voters in 2022 and 2024, the initiative would allow voters to participate in primary elections regardless of party affiliation, and in the general election, voters would be able to rank the top five candidates from the primary by order of preference. Proponents say those changes would empower Nevada’s growing share of nonpartisan voters, who make up nearly a third of the state’s registered voters and are currently unable to vote for partisan offices in primary elections.

But organized opposition to the initiative emerged last month with the creation of the “Let Nevadans Vote” coalition, which is leading efforts to have voters withdraw their signatures from the petition effort. Prominent Democratic officials in Nevada, including Gov. Steve Sisolak and Sens. Jacky Rosen and Catherine Cortez Masto, have also voiced staunch opposition to ranked-choice voting in recent weeks. They’ve argued the system is confusing and time-consuming and would lead to votes being thrown out.

On Wednesday, attorneys representing Helton and Nevada Voters First, the group backing the so-called “Better Voting Nevada” initiative, made their final pitches to the court in oral arguments before the justices — just 21 days before the signature submittal deadline.

Bradley Schrager, an attorney well known for representing Democratic candidates and causes and who is representing Helton in the case, argued the proposed initiative violates the single-subject rule for petitions, by proposing two major changes to elections — one change from closed, partisan primaries to open primaries, and another change from plurality voting in general elections to ranked-choice voting.

“In this initiative, there are two discrete and major reforms that would represent a pair of radical disjunctions with the historical conduct of Nevada elections,” Schrager said.

On the other side, Todd Bice, a Las Vegas attorney who registered the Nevada Voters First PAC in November, argued that the two changes are intertwined as they both relate to the singular subject of “how the voters select their elected representatives for Congress, executive branch constitutional offices and state legislators.”

In January, a Carson City District Court judge sided with Bice, stating in a ruling that “the law allows Nevada voters to propose to change the manner in which specified officeholders are chosen.” Shortly after, Helton’s attorneys appealed the decision to the Nevada Supreme Court.

The court took no immediate action on the case Wednesday, but a decision is likely to come in the coming weeks or months.

Amid the back and forth about whether the initiative relates to a single subject, several justices raised questions about the breadth of the initiative and mechanics of the proposed election changes.

Justice Lidia Stiglich questioned whether the subject of “how we choose our representatives” was too broad for a single initiative.

“Could you add one more in — add elimination of early voting — and they all relate to how we choose our people?” she asked. “Under what you're proposing here, they'd all be one subject because how we choose is this large umbrella.”

Those comments echoed Schrager’s argument, but Bice pushed back on her statements, arguing the two components of the petition are intertwined and relate specifically to how candidates are chosen by voters.

“If it's not a single subject under the statute, then this statute is being abused in violation of the rights of the citizenry because … it's being used to compromise their ability to make effective use of their power of initiative,” he said.

Both parties also referenced a similar case decided by Alaska Supreme Court, which in 2020 ruled that an initiative proposing open primaries and ranked-choice voting did not violate the state’s single-subject rule.

Bice also pushed back when Cadish questioned whether the initiative was a form of “logrolling,” meaning that it could, for example, attract voters interested in open primaries even if they may not be interested in or even understand the ranked-choice voting component.

Noting that every initiative has different components, Bice argued by using a hypothetical that if the proposed changes were applied simply to the election for governor, both an open primary and ranked-choice voting general election would relate to the subject of how voters choose the governor of the state. Applying that same logic to multiple offices does not change how the initiative fits under the single-subject rule, he said.

“You have to admit that the office of governor, how you choose your governor, would be a single subject under the state Constitution,” Bice told the justices. “And if not, then I submit that the court's jurisprudence is actually interfering.”

The description of effect

Alongside discussions of the single-subject rule, Schrager argued that the initiative’s “description of effect” — a 200-word summary that accompanies the signature form for the petition — did not address the negative ramifications for minor parties.

“This particular issue would force minor party candidates … to compete in money and time and attention with well-funded Democratic or Republican candidates,” he said.

Schrager also argued that because the initiative proposed two major changes, “the 200 words becomes awful tight.” Instead, he proposed that it would be better to try to achieve the two major changes through individual petitions — one for open primaries and one for ranked-choice voting.

But because the description is required to be short, Bice pushed back on any alleged deficiencies.

“Anyone can use this description of effect process to knock out any initiative with which they disagree. Let's just face reality,” he said.

Still, Justice James Hardesty raised an issue that the description of effect does not address a voting option unique to Nevada: “None of These Candidates.”

Hardesty questioned how selections for that option would be tabulated, if the ranked-choice system requires a winner to receive at least 50 percent of the votes.

“It seems to me that that is an extremely critical question when talking about the description of effect,” he said. “And again, I think generally, the description or effect covers most of the points here, but this is pretty material, I think, in our state.

Though not listed in the 200-word description, the initiative states that votes for “None of These Candidates” would be required to be tabulated, reported and made public, but would “not be counted for the purpose of electing or ranking any candidates for partisan office.”

How the initiative works

If approved by a majority of voters during general elections in 2022 and 2024, the initiative would amend the state Constitution to require open primaries (where voters of any political party can participate) and ranked-choice voting in general elections beginning in 2026.

The system would only apply to U.S. Senate and congressional races, legislative elections and statewide office positions — not to presidential elections or lower offices.

If a candidate wins an outright majority of votes (more than 50 percent), they would be elected to the office. If not, the candidate with the fewest first-preference votes would be eliminated, with their “votes” redistributed based on the second preference of those individual ballots. The process would continue until the final two candidates, or when one candidate reached a majority.

Though Nevada Voters First PAC, a group registered to Bice, has led the in-state efforts to implement the “Better Voting Nevada” initiative, the Institute for Political Innovation is also backing national efforts to implement the system, which is also called “Final Five Voting.” Katherine Gehl, a Chicago-based author, philanthropist and founder of the institute, has also provided significant financial support to the efforts.

Nevada Voters First must submit its signatures to qualify the petition for the November ballot (about 140,000 are required) by June 29.