On the Record: The story and policy positions of GOP attorney general candidate Craig Mueller 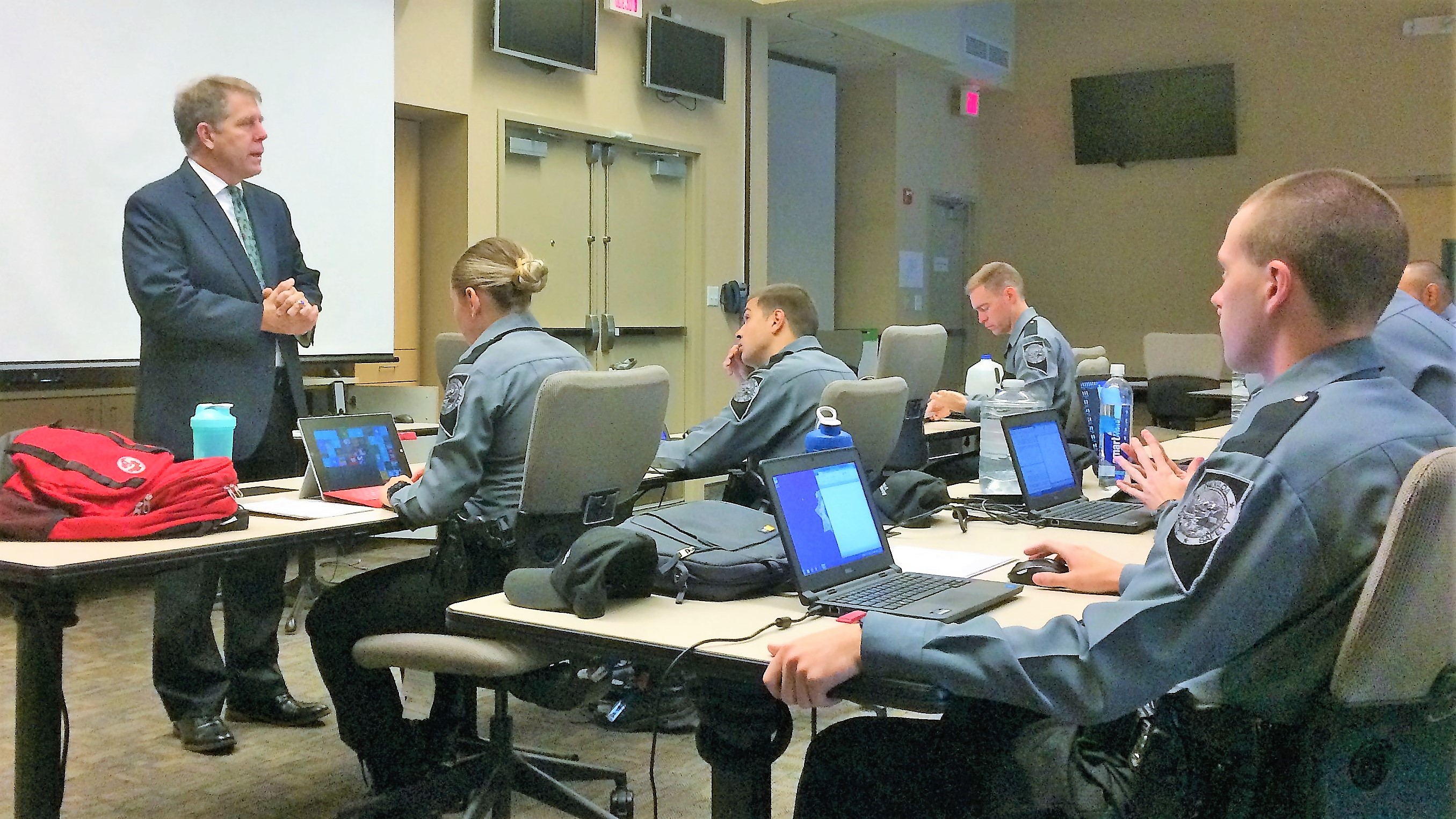 With more than two decades of experience as a Clark County prosecutor and in private practice, Las Vegas attorney Craig Mueller argues he’s the best prepared to take the mantle of the top law enforcement officer in the state.

But Mueller, 57, is facing off with a formidable Republican primary foe in the attorney general’s race — former assemblyman and former Assistant Attorney General Wes Duncan, who has been aggressively campaigning for months and already racked up major endorsements including those of 15 elected sheriffs and the Teamsters Union. Duncan, 37, also raised more than half a million dollars for his campaign last year, beating Democratic frontrunner Aaron Ford and eclipsing the $100,000 that Mueller loaned himself in 2017 for his campaign.

“While I haven’t been campaigning for this position since last January, like my opponent, I have instead focused on practicing law in Nevada and managing my law firm up until announcing,” Mueller explained. “As my campaign’s message of experience and adherence to the law continue to be made in front of the people of Nevada, my support has likewise continued to grow.”

Mueller grew up in Las Vegas and served in the Navy as a Missile and Fire Control Officer in the Persian Gulf. He earned a law degree from The University of Baltimore School of Law and runs a law firm with his wife and business partner Cristina Hinds. On his website, he notes that he has personally run more than 150 jury trials.

Mueller also touts his work on the ballot measure that seeks to repeal the Commerce Tax, which affects businesses with more than $4 million in Nevada revenue each year. Although the ballot language was struck down by a judge in the 2016 cycle, it is proceeding this cycle and could be on the ballot if supporters collect more than 112,000 signatures on their petition.

He also said he has endorsements from local attorneys and military service members including former Undersecretary of the Navy Dionel Aviles.

“I would like my campaign to be supported by people who think I’d be the right choice for the job,” he said. “I believe that it is the people of Nevada, and not the elected officials, heads of industry, or PACs that should decide who represents them in the courts.”

Here’s where Mueller stands on the issues:

“Not that it should matter, but I am personally opposed to abortion in its practice and I applaud restrictions in place in Nevada that limit state funds to abortion cases unless they endanger the life of the mother and restrictions on abortions outside of a 24 week window,” he said.

Although he acknowledged abortion is legal nationwide, he believes the legality of the procedure should be decided by individual states.

“As interpreted by the federal government and the Supreme Court, abortion is currently the law of the land,” he said. “However, I do not believe this issue to be something that should be decided and governed from Washington – as should also be the case with marijuana use. As attorney general of Nevada, I would fight for the right of states to make the ultimate decision on the laws governing abortion.”

Mueller said at a Republican Men’s Club candidate forum in Las Vegas that he supports the death penalty.

Mueller sided with the current attorney general’s opinion that Question 1, a voter-approved ballot measure that would have expanded a background check requirement to more gun sales and transfers, can’t be enforced because it requires the FBI to perform the check and the FBI has declined.

“Attorney General (Adam) Laxalt’s interpretation is absolutely the correct one,” he said. “There is no authority for a state to force a federal law enforcement agency to execute background checks required by state law.”

He said the state needed to be tougher on crime and put more police on the streets. At a recent candidate forum, he also proposed creating a unit within the attorney general’s office that would pursue ex-felons in possession of firearms.

Like many Republicans this cycle, Mueller is outspoken against “sanctuary city” policies, in which jurisdictions limit the aid they offer to the federal agents who are charged with enforcing immigration laws. No jurisdictions in Nevada describe themselves as sanctuary cities.

Still, he criticized the federal government’s execution of immigration enforcement and pointed to the existing 287(g) agreement the Las Vegas Metropolitan Police Department has with ICE.

“The fact they are doing an awful job at it is a different conversation entirely,” he said. “Currently, the sheriff already has the authority to cooperate with federal authorities on reporting who is in jail and Nevada is currently in compliance with federal regulations.”

Mueller believes the federal government has no right to intervene in Nevada voters’ decision to legalize marijuana.

“The state Constitution very clearly has legal medical marijuana in it, and regarding recreational marijuana, I can find no authority of the federal government to regulate marijuana within a state,” he said. “The people of Nevada voted on both issues and that is to be respected. The 9th and 10th amendments very clearly state that powers not given to the federal government in the Constitution are left to the states or the people.”

Laxalt hasn’t announced any concrete actions to defend the state’s marijuana industry against a possible federal crackdowns in the two months after Attorney General Jeff Sessions repealed the Cole Memo, which had given legal marijuana businesses a measure of security that they wouldn’t be raided. Laxalt did meet with new U.S. Attorney Dayle Elieson and discussed marijuana regulation, although he didn’t describe their conversation further, and he has otherwise said he doesn’t think there will be a crackdown.

“As attorney general I would take legal action to push back on any attempts by the federal government to interfere with marijuana businesses in our state,” Mueller said, adding that he’d sign a letter to Congress that Laxalt didn’t sign that supports a banking fix. “I would go one step further and support private individuals to have the state charter a bank specifically for that purpose.”

Mueller was sharply critical of Laxalt’s decision not to pardon Fred Steese, a man who had been imprisoned for 21 years in prison but was later declared actually innocent by a judge. Laxalt was the only person on the Board of Pardons Commissioners who opposed the pardon, later explaining that the Clark County district attorney had opposed it.

“I am appalled by the Steese case and the decision not to vote to pardon him,” Mueller said. “The lack of practical experience in the Nevada justice system and the AG’s office is showcased by that decision. He was proved innocent beyond any doubt, voting not to pardon made no sense.”

Mueller said his involvement in the criminal justice system for 25 years and work prosecuting, defending and appealing murder cases in courts including the 9th Circuit Court of Appeals give him the experience needed for a role on the pardons board.

“When lives are on the line, you can count on my legal experience to avoid appalling abuses of due process like this,” he said.

“I’m offended by the prospect of running for office while holding an appointed government position,” he said. “Taking campaign contributions while holding an office with power over the businesses and individuals making those contributions is an open and obvious conflict of interest that brings no credit to those who participate in it.”

Mueller’s primary opponent, Duncan, has backed the idea of resigning to run, specifically for those such as Democratic attorney general candidate Aaron Ford who are in the middle of a four-year term while mounting a time-consuming campaign.

Although Duncan quit his assistant attorney general job and took a post in the private sector before formally announcing a campaign this fall, Mueller thinks that’s not enough and pointed out that Duncan was fundraising months earlier while still in the government job.

Mueller said he’d be more than happy to prosecute cases of voter fraud, but said the problem is proving it.

He also raised questions about the security of new voting technology.

“I honestly have deep skepticism about electronic voting machines,” he said at a recent candidate forum. “I don’t believe they’re on the up and up.”

“I stand with most Nevadans in absolute opposition to Yucca Mountain as a nuclear repository site,” Mueller said. “However, with over 86 percent of the state of Nevada owned by the Federal Government, we should absolutely be looking for ways to better utilize the land and natural resources of this great state.”

He believes the state would do well to create a nuclear core reprocessing center, and thinks it could be part of a deal to bring fresh water to Nevada.

“As attorney general, I would look to emulate the negotiating skills of President Trump to strike a deal for Federal and state funding of an advanced technology center focused on the reprocessing of nuclear cores for the purposes of reuse,” he said. “I would couple that technology and reprocessing center with a deal in Texas or Mexico for a nuclear desalination program to pump water in to Nevada from the Gulf of Mexico or the Sea of Cortez.”

He’s been critical of the state’s current approach, which is to vehemently oppose the development of Yucca Mountain.

“This approach would provide high paying jobs and avenues for advanced technology industries to take hold, a resolution to our Nation’s underfunded and poorly managed nuclear material program, and would seek to refill Lake Mead while making Nevada a water-independent state,” he said.