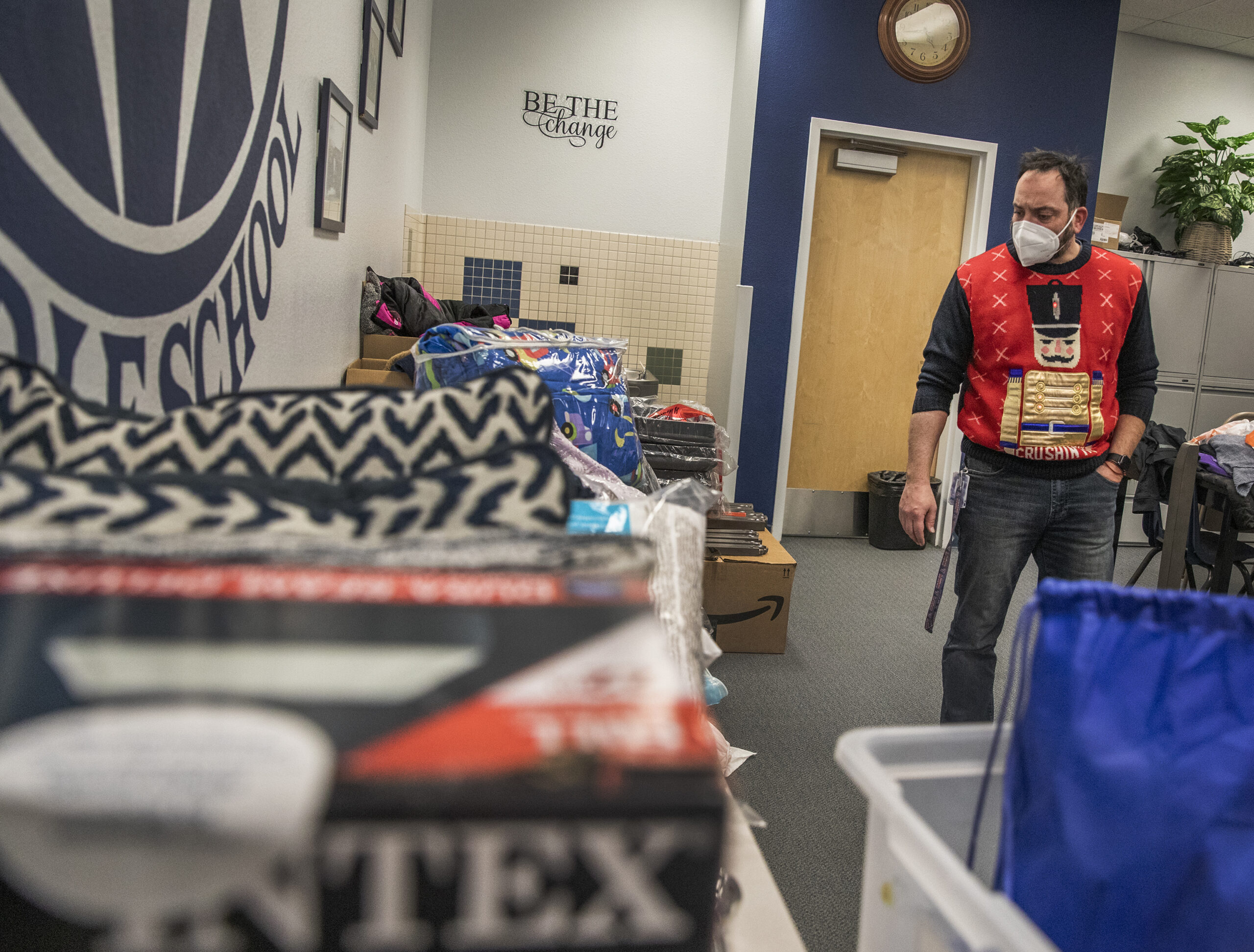 A middle schooler’s spotty attendance record raised concern among her teachers and triggered a home visit in early September.

The seventh-grader hadn’t regularly been logging on to her virtual classes, so Lloyd Goldberg and Joel Bradley, student success advocates at Jerome Mack Middle School, went to find out why. They discovered an apartment largely devoid of any furniture, save for a beach chair and flimsy dinner tray table the girl was using for remote learning. At night, she slept on the floor.

When the coronavirus plunged the Clark County School District — and others across the state and nation — into distance-education mode, so began a scramble to outfit every child with a laptop or Chromebook and internet access. But the empty apartment signaled a whole new frontier in the battle to make remote learning viable.

Student living conditions, normally out of sight to educators greeting children in a brick-and-mortar school, suddenly could not be ignored. Educators know they can escalate anxiety, depression and attention or behavior disorders.

“What can we do about this?” Goldberg said he wondered that day. “We can’t walk away and not do something.”

The scene inspired a donative drive at the east Las Vegas school that led to a delivery of two beds, a table, chair and desk to the girl’s apartment. The mother cried as school staff members carried items upstairs and furnished their home. The student’s eyes widened in delight.

The home visit was a precursor to what has become a mental health-oriented pilot program in a dozen Clark County schools. Dubbed the Lifeline program, it’s operated by staff volunteers from each school who spring to action when there is a potential student in crisis based on academic data, mental health screenings, parent calls or teacher referrals. Some make home visits. Others bring students on campus.

Whatever the delivery method, the goal is to ensure student well-being. These days it comes in many forms.

Jessica Houchins, a counselor at Jerome Mack Middle School, recently visited a student so scared by COVID-19 that he hasn’t left his home since March. She also sat with a boy who cried for an hour because he misses his friends; helped a girl who ran away and was sexually assaulted; delivered supplies to a homeless student living in a truck with his family; and counseled other students who are self-harming or have expressed suicidal thoughts.

“It makes all the difference to see a kid face to face versus over a computer screen,” she said.

The mental health needs among students, especially in this low-income neighborhood, aren’t new. But school officials say the pandemic has amplified the existing crisis. Twelve students in Clark County have died by suicide since school started in August. That figure is already greater than the entire 2019-2020 school year, when fewer than 10 students took their own lives.

The grim reality has accelerated conversations up and down the state about how to protect children, many of whom aren’t in physical classrooms.

If some national surveys are any indication, the need is significant. Nearly 1 in 3 young people — 30 percent — said they were more often feeling unhappy or depressed, according to America’s Promise Alliance, which surveyed a nationally representative 3,300 people (ages 13-19) in late April and early May. A similar number of young people were more concerned than usual about having their basic needs met.

None of this comes as a surprise to school-based mental health professionals. Alison Clark, a school psychologist in the Clark County School District, said students were in crisis before the pandemic. For years, she said, school staff have been on high alert, constantly looking for signs that students may be contemplating hurting themselves or others.

The pandemic — which has stymied social activities and, in Clark County, prolonged distance education — stands to exacerbate the situation. Many children miss seeing their friends, don’t interact as much with trusted adults, lack quiet or privacy at home, and are experiencing financial burdens associated with family job losses.

“Kids are struggling,” Clark said. “Adults are struggling, but the kids are pretty vulnerable right now. They feel more isolated than ever. Some have working parents and are really alone.”

And despite teachers’ best efforts to engage students online, navigating remote learning can be a stressor in and of itself, said Katie Dockweiler, director of government relations for the Nevada Association of School Psychologists. They’re suddenly in charge of their own organization and schedules.

“Then they feel overwhelmed and get behind, which creates anxiety,” she said.

District leaders have been weighing a trifecta of crises — physical, mental and academic health — as they evaluate when and how to reopen schools. The mental health aspect emerged front and center during a Clark County School Board of Trustees meeting in early October, when district staff shared some troubling trends.

Youth suicides were up, but referrals or calls to various support services such as The Harbor or SafeVoice were down. The data appeared to confirm what educators and school-based mental health professionals feared during the pandemic: Students likely were experiencing more mental health issues, but the lack of face-to-face contact had given way to fewer reported incidents.

While some students are thriving under the shift to virtual education, “collectively, it’s probably harder for more of the students than not,” said Mike Barton, the district’s chief college, career and equity officer.

After the school board presentation, Barton received a call from Punam Mathur, executive director of the Elaine P. Wynn and Family Foundation. Mathur, who has played an instrumental role in a public-private partnership seeking to bridge the digital divide, asked what the district might be able to do for student mental health. The conversation led to the Lifeline program.

A key ingredient behind the program’s success is a student well-being survey from a technology startup called Panorama Education. The questionnaire serves as a “check-engine light” for children’s mental health, Barton said. Through Nov. 23, the Panorama survey at the dozen pilot schools has directly led to 1,169 virtual and 286 in-person mental health sessions with students, district officials said. It also has resulted in nine suicide protocols, which occur when a student is self-harming, considering self-harming or expressing suicidal thoughts. (Other suicide protocols — a step-by-step proces for connecting students with appropriate mental health care — have been initiated by teacher, peer or family member referrals and other warning signs.)

The Clark County School Board on Thursday will consider approving the purchase of the Panorama Education data platform, which is used by more than 1,500 school systems, including the Washoe County School District. The $761,000 contract would be paid for using CARES Act-related funding.

“Should the Board of School Trustees not approve this request, CCSD will not have baseline districtwide data on (social-emotional learning) and the wellbeing of students and staff,” according to backup material for the agenda item.

For staff at Jerome Mack Middle School, piloting the Lifeline program came easily. The school sits a block away from Boulder Station Hotel and Casino and serves many students who live in apartments or houses with multiple families. Keenly aware of the traumas their students have experienced, volunteer staff members began making home visits soon after remote learning resumed in August.

Now, the school’s wellness team consists of social workers, counselors, student success advocates and security monitors who have gone door to door — donning face masks, of course — to check on students. The school’s custodians may join the effort, too.

“You don’t need a fancy degree to say hi to a student and check on them,” Houchins said.

The team has completed close to 1,000 home visits since the beginning of the school year, said Goldberg, a student success advocate. And, in the process, the school has filled four apartments with donated furniture and given students food, clothing and other basic necessities while also addressing their mental health needs.

While remote learning has limited student-teacher interactions in myriad ways, Goldberg said it has created at least one silving lining: Educators have a window into students’ home lives when they can see their environment during Google Meet sessions.

The result is a more responsive school community.

“We can’t do things the way they have always been done,” he said. “Clearly, education was failing our students when we were in person. We can’t just let education fail them online now.”

Clark County schools outside the Lifeline pilot program have been crafting their own mental health strategies. The common denominators: a team approach and mental health screenings.

“If we’re not communicating regularly, we are not keeping students safe,” she said.

The same theory applies to schools that have resumed in-person learning during the pandemic. The Washoe County School District, which up until recently offered some form of in-person learning for all students, has leveraged more community and state partnerships to address mental health needs.

The Reno-area school district hasn’t had any student suicides this year, but officials have noticed an uptick in anxiety and depression among children, said Katherine Loudon, an administrator in the district’s counseling department.

“I think we have learned how to work more efficiently to address the needs of the kids because we had to,” she said. “There were times when people had silos or lanes. We’ve had to work more closely to make sure we’re doing things better.”

Reggie Burton is someone who has heeded the community call for help. He recently joined a Henderson high school class virtually to talk about mental health.

It’s a topic close to his heart. His 22-year-old son, Avery, died by suicide in 2017 after experiencing a major depressive episode. Shortly before his death, Avery, a standout athlete and accomplished student, had graduated from UNLV with a degree in kinesiological sciences and was making plans to pursue a doctorate in physical therapy.

Burton said he doesn’t want other students feeling helpless or families experiencing the heartbreak his did after Avery’s suicide.

“It is 100 percent preventable? Maybe not,” he said. “Maybe 99 percent. But it could be 100 percent if we knew what to look for and could get someone to help.”

As educators, mental health professionals and community members band together to combat mental health issues among children, they know it’s impossible to fully grasp the magnitude of the pandemic’s effects. It could be years, decades even, before society has a handle on how deeply the unprecedented times have affected its youngest members.

Their message to parents and caregivers: Listen to what children are saying and lean on schools for help. Even if learning isn’t happening within physical classrooms, the mental health professionals who exist within schools haven’t disappeared.

“Access those resources,” Loudon said. “There are a lot of people who really want to help.”