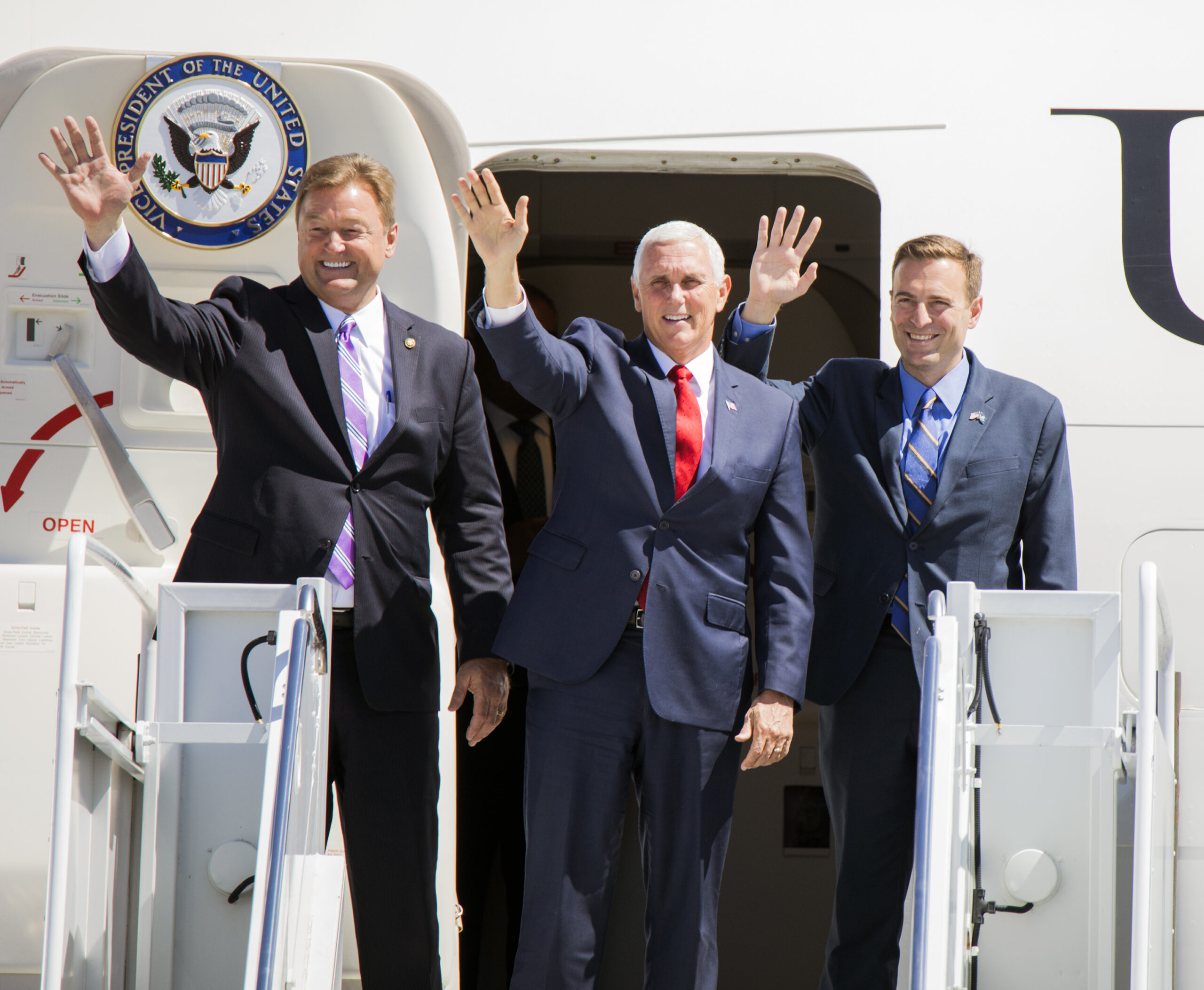 Vice President Mike Pence called U.S. Sen. Dean Heller a “tenacious champion” for the military and veterans at a speech in front of servicemembers and veterans at Nellis Air Force Base on Friday, kicking off a day of stumping in Las Vegas for both Heller and Attorney General and gubernatorial candidate Adam Laxalt.

Pence, in a short 15-minute speech to a crowd of a little less than a hundred servicemembers and veterans at the Thunderbirds Hangar, touted the work that President Donald Trump and Heller, in his role on the U.S. Senate Veterans Affairs Committee, have done to invest in the nation’s military, saying that the Republican senator has “stood with” the administration “every step of the way.” Heller is facing a tough re-election fight against Democratic Rep. Jacky Rosen where veterans have become a key campaign issue.

Though the speech was technically an official event by both the vice president and Heller — and not a campaign rally — Pence spent a significant part of the speech praising the Republican senator’s accomplishments.

Pence noted that Trump has signed more than 15 military- and veterans-related bills — Heller pegged the figure at 19 in his brief speech — that Heller authored since entering office, calling it an “extraordinary rarity.” Heller said that those bills have helped improve accountability within the Department of Veterans Affairs and expand mental health services for veterans.

Pence described Heller’s “strong support” for the president’s proposal to increase military spending and highlighted his ongoing support for the administration’s work to address military and veterans issues.

Pence told the servicemembers that he stopped by “really just to say thank you, a very simple thank you for your service from your commander in chief and his number two,” and promised that under Trump the White House “will always have your back.”

Heller was similarly complimentary of the Trump Administration in a short, five-minute speech preceding Pence’s remarks.

“It’s clear that this administration, President Trump, Vice President Pence, are committed to supporting the men and women who have answered our nation’s call,” said Heller, who also thanked the entire Trump cabinet for being a “strong champion for our troops and military heroes.”

But, in a subtle nod to his re-election efforts, Heller noted that “we do have a lot more to do.”

“I know that this administration and Congress are just getting started,” Heller said. “So you can count on me in my role in the U.S. Senate Veterans Affairs Committee to keep fighting for all of you.”

Before the short rally, Pence participated in a brief STEP (Stripes for Exceptional Performers) promotion for a tech sergeant. He also briefly met with Heller and Laxalt on Air Force Two after landing at Nellis Air Force Base around 11:20 a.m., before they deplaned together and spent about 10 minutes greeting service members and veterans on a rope line.

Heller didn’t respond to a question from The Nevada Independent asking whether he had any response to criticism of his pre-existing conditions bill as he walked away from the rope line. Pence also ignored questions from the Independent about Heller’s re-election changes and from the Las Vegas Review-Journal about the president’s immigration policies.

Pence had an event with the Republican Governors Association and a fundraiser benefiting Laxalt scheduled for later in the day.