Rep. Susie Lee on whether PPP program benefited her husband’s company: ‘I was doing my job’ amid crisis 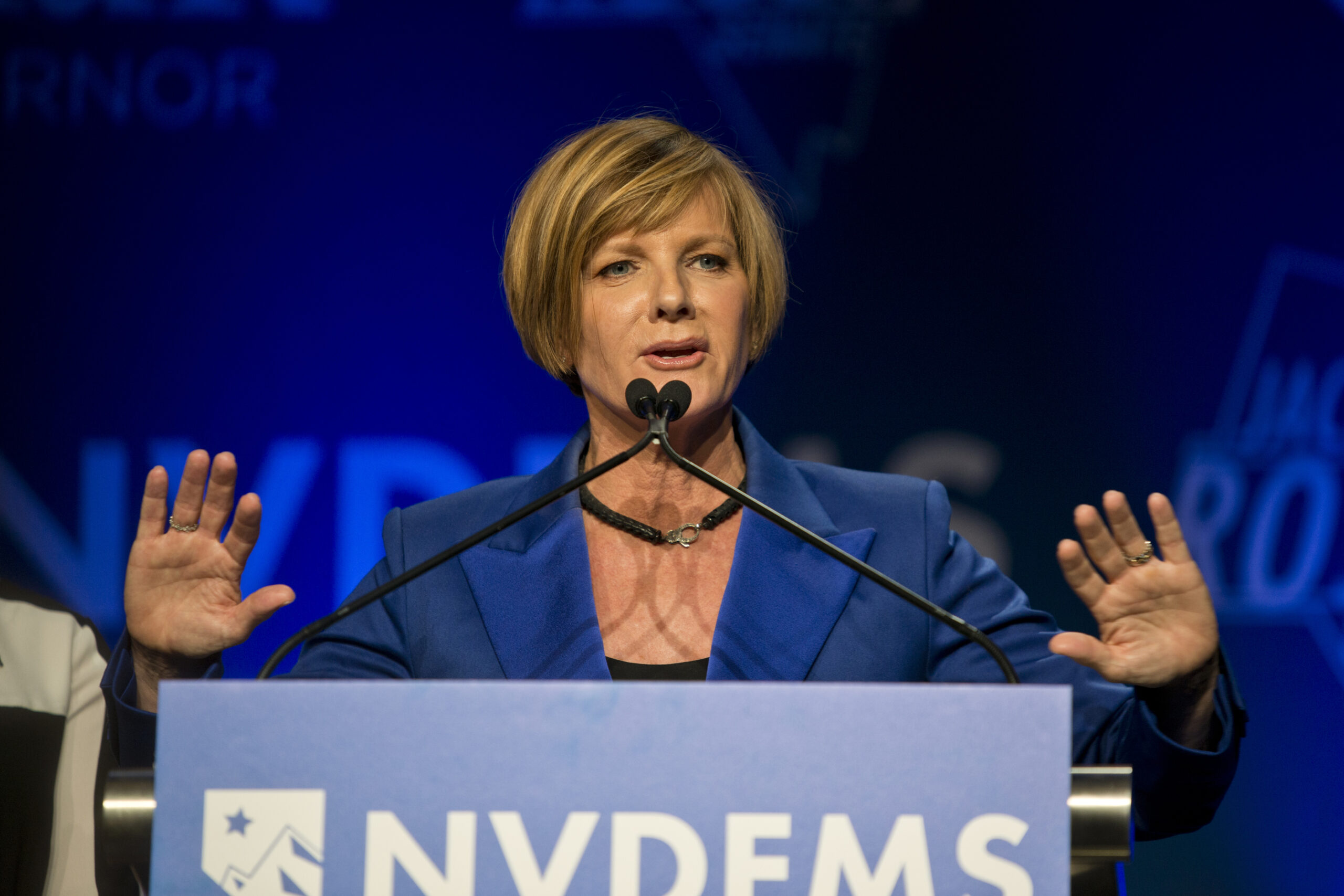 In her first interview following reports last month that the casino company run by her husband had benefited from a change in the federal government’s paycheck protection program that she pushed for, Democratic Rep. Susie Lee forcefully defended her actions and flatly denied any conflict of interest, saying in part: “I was doing my job.”

“[A] conflict of interest would be putting my personal interests above the interests of my constituents,” Lee said. “I'll maintain that we've seen 42,000 companies in Nevada access this program, 525,000 jobs. We saw a major segment of our economy cut out, so when the interest of your constituents coincides with your interest — I was doing my job.”

In the early days of widespread economic shutdowns triggered by spiking coronavirus infections, the gaming and hospitality industries cratered as state-mandated shutdowns shuttered hotels and mothballed slots and table games.

However, as Congress rushed to pass $2 trillion in economic relief through the CARES Act, those casinos — alongside thousands of other small businesses which received a significant portion of their revenue from gaming — were excluded from the $660 billion Paycheck Protection Program under rules proposed by the Small Business Administration, the agency tasked with doling out federal paycheck loans.

Lee, alongside the other three members of Nevada’s congressional delegation, sounded the alarm on the decision and pushed repeatedly for the SBA to reverse its decision and open the loans to small gaming businesses.

Among the delegation, perhaps no single member had the influence of Rep. Mark Amodei — Nevada’s lone Republican on Capitol Hill — who spoke directly to White House Chief of Staff Mark Meadows and Treasury Secretary Steven Mnuchin in his bid to force the SBA to change the rules.

The SBA reversed the policy on April 24, nearly a month after the original CARES Act was signed into law. Roughly two weeks later, Full House Resorts — the company owned and operated by Lee’s husband, Dan — applied for and received $5.6 million across two PPP loans as it sought to reopen two properties in Colorado and Indiana.

Lee and her husband own millions in stock and stock options for Full House, and its stock price did recover roughly half of its lost value through the month of May. Over the month of June, however, the price has trended back down, falling from a peak of $2.08 on June 8 to a share price of just $1.27 as of Thursday.

Though industry outlets first reported the Full House loan approvals in May, the story avoided wider attention until a June 8 article from The Daily Beast elevated Lee as the first known member of Congress to benefit — in any way — from the sweeping relief provided through the CARES Act.

Since then, a sampling of PPP data released by the Treasury Department this week show at least a dozen members of Congress on both sides of the aisle own or are related to the owners of businesses that received such loans.

Lee has consistently denied that she had any inside knowledge of Full House’s decision, adding that “we have a general rule that we do not influence each other's business decisions and work.”

“After the gaming exclusion was lifted, he said, ‘You know, we're obviously gonna have to look into this,’ and that's what they did,” Lee said. “I didn't know what they were doing until May 8, that in fact, he met with his board and they decided to go ahead and pursue applying for the loan.”

The congresswoman also denied an allegation made on Twitter by MSNBC anchor Stephanie Ruhle that Lee’s husband had acted against the advice of party leaders, saying in part that “I was never advised not to do that.”

“It was in the interest of our state, Lee said. “That is what you would expect your congressional delegation to do at a time when you are met with this economic crisis, and that's exactly what I did.”

Lee ultimately characterized criticism of her push for the rules change as “a complete attack by the Republican Party,” adding that her job in Congress was “to make sure that workers and businesses in my state survive.”

“Before the exclusion was lifted, we were ranking near the bottom of states that were accessing this loan,” Lee said. “So it was incumbent upon me to do my job and advocate for businesses in our state.”

Lee also said that her phone was “ringing off the hook” in the early days of the crisis, and that had she not advocated for the change, “I'd be getting attacked right now for not doing my job.”

“I think that you have to go back to what we were dealing with at that time, which is a complete shutdown of our economy and the fact that a bureaucrat in Washington used a 20-year-old guidance to basically cut out a whole segment of the industry,” Lee said, referring to the SBA’s regulation.

In the time since The Daily Beast story, both Lee’s general election opponent — former professional wrestler and small business owner Dan Rodimer — as well as Republican-aligned outside groups have seized on the issue.

In June, a conservative-leaning watchdog, the Foundation for Accountability and Civic Trust, filed a formal ethics complaint against Lee with the Office of Congressional Ethics. Not long after, the Congressional Leadership Fund, a super PAC with ties to GOP leaders in the House, launched a multi-pronged campaign attacking her as “Susie the Swindler” and accusing her of gaming the system.

Rodimer has largely echoed those talking points, tweeting in June that Lee was “taking advantage of the pandemic.”

Referring back to the chaotic period in March and April, Lee accused the SBA of taking “cut and pasted” Clinton-era regulations on gaming businesses — regulations written when small gaming companies were far rarer than today — and applying them to the PPP program, ultimately affecting businesses across the U.S.

“So at that time, it was doing my job, along with our bipartisan delegation, including bipartisan members across the country who have gaming interests in their states as well,” Lee said. “At the time, I had no knowledge and again, I was not involved in Full House's decision to apply, I wasn't involved in the SBA deciding to award the loan, and it will be up to the oversight committee that's been set up to look at them, as well as every other company that's received the loan.”

On Congress and the coronavirus

Speaking more broadly about the role of Congress in steering the U.S. economy through a pandemic that is expected to stretch, at minimum, into the end of 2020, Lee said the federal government’s priority should remain on expanding the breadth and speed of coronavirus testing.

Lee said such testing would go a long way toward allowing the most problematic indoor businesses — such as theaters — to reopen.

“I think the President said a couple weeks ago, ‘they don't even want to do more testing, because more testing shows more infection rate,’” Lee said. “I mean, to me, that's so absurd. If you could, at the point of entry test people and then go isolate people who you find — that, to me, is where we should be investing our resources right now.”

Lee also called for the passage of the so-called “HEROES Act,” a wide-ranging stimulus bill spearheaded by Democrats that would continue and expand relief provided originally by the CARES Act.

The measure was narrowly passed by House Democrats on a near-party line vote in May, but its progress has since stalled in the Republican-controlled Senate amid reports the White House is looking to launch its own new round of stimulus payments.

“We've done our job, we passed it,” Lee said. “And obviously, we're going to have to come back and negotiate and get that across the finish line. And I'm hopeful we can do that by the end of this month.”

Reflecting on the successes and failures of the original CARES Act, Lee said “there will be a lot of looking back on what could have been done better.”

“And hopefully, we will learn,” she said. “Hopefully, we will not have an economic crisis like this in the future, but hopefully we will learn from that. But I think that in hindsight, we can always say they ‘woulda-shoulda.’ But at the time, this was the option to get paychecks into the hands of workers of companies that were forced to close.”