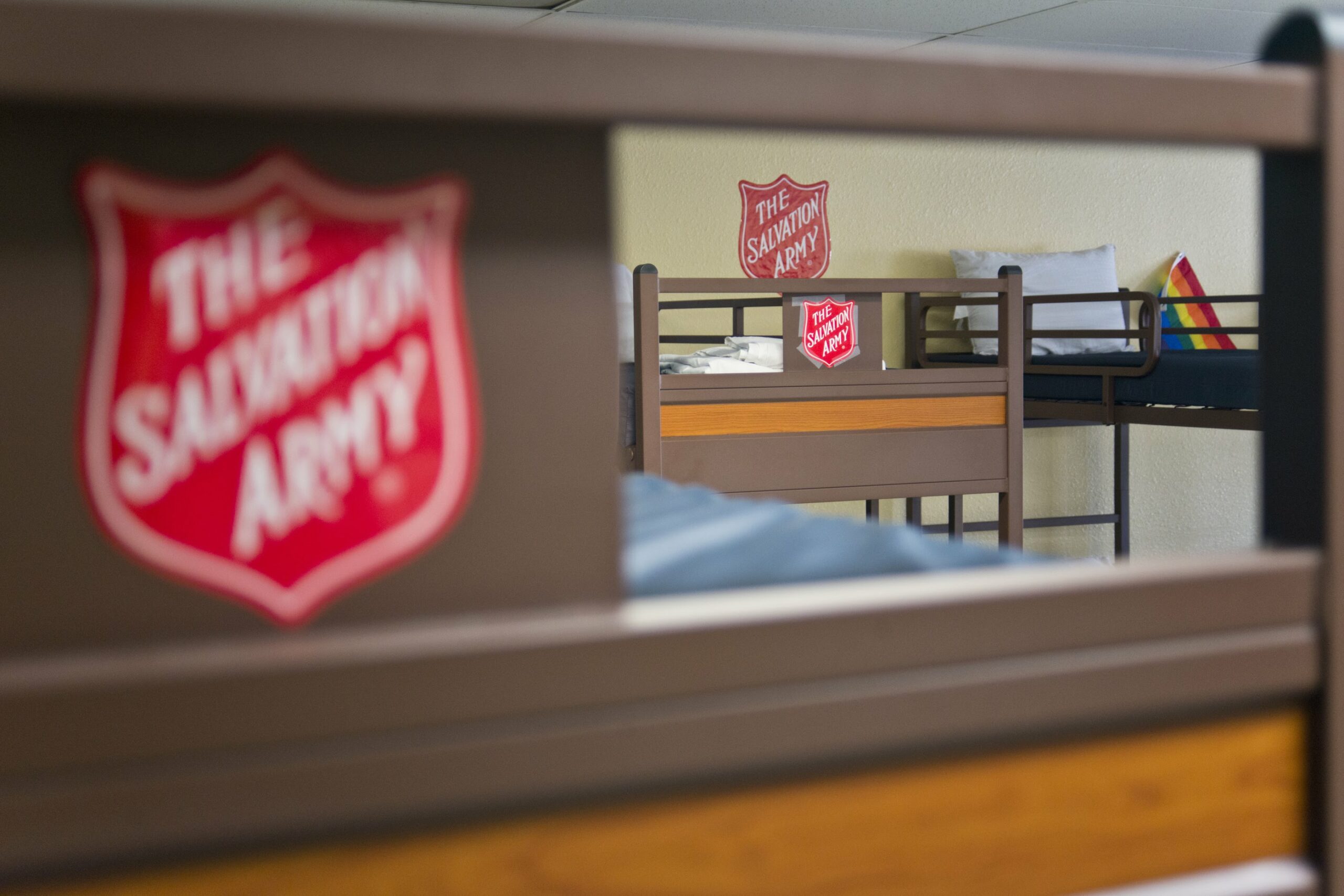 The outside of the dorm is nondescript, fitting in quietly among the assortment of buildings on the property, but when the bright turquoise door swings open, a world of color is unleashed, and bold black text on the inside reminds visitors in no uncertain terms to “smile often” and “never, ever give up” because “you are loved.”

The Salvation Army reopened the LGBTQ+ safety dorm on its Southern Nevada campus in early February after a six-day renovation that doubled the occupancy of the dorm from nine to 18 beds. The overnight dorm houses homeless LGBTQ+ individuals, providing them with a bed, bathroom and — administrators hope — an uplifting environment.

“If you’re having a bad day, and you look around and see some positive words, you’re like, ‘You know what, ‘have hope,’” said Ryan McDonald, homeless services coordinator for the Salvation Army of Southern Nevada. “Maybe it brightens your day a little bit.”

The renovation was funded through partnerships with The Center, a Southern Nevada LGBTQ+ community center, and Bright Star Foundation, a nonprofit aimed at helping homeless LGBTQ+ youth.

The dorm was decorated by the Salvation Army’s Echelon group, based on a goal to design a space that is more than just four walls and provides a “positive vibe.” The resulting dorm is bright and welcoming, its yellow walls dotted with rainbow pride flags.

All the Salvation Army overnight dorms open at 6 every evening and close at 5:30 every morning, serving individuals 18 and older. In total, there are five shelters located on the Salvation Army campus — two free shelters, two paid dorms and the safety dorm.

Every dorm on the Salvation Army campus has bunk beds for guests rather than floor mats. McDonald believes that those bunk beds are important for the morale of those who use the facility.

“It really starts to affect you mentally,” he said of the floor mats used in other shelters. "The good thing about [the beds] is it changed everything. It got them off the ground, it gave them space from being right next to each other, it gave them a little bit of dignity back.”

In the safety dorm, the 18 beds are accompanied by multiple bathroom stalls and three showers for those staying overnight.

During the six days of renovation, the individuals staying in the safety dorm were housed in the old shelter facilities that are now used for laundry services and as a seasonal day shelter.

The safety dorm originally opened five years ago to serve transgender individuals but has since expanded to house anyone who identifies as a part of the LGBTQ+ community and, because of that, does not feel safe in other dorms or shelters. Right now, it is the only shelter facility in Clark County with an exclusive focus on LGBTQ+ housing needs.

The Salvation Army is a faith-based nonprofit founded in 1865 that operates around the world. The organization serves in 130 countries and operates locally all around the U.S., offering a variety of philanthropic services.

As a national organization, the Salvation Army has had a complicated history with the LGBTQ+ community. In December 2019, the organization faced significant backlash from critics over allegations about a history of discrimination.

The organization has been accused multiple times of denying shelter or services to individuals based on their sexual orientation or gender identity. In a 2011 article, the New York Times quoted a position statement from the Salvation Army’s website that stated the organization believes scripture “forbids sexual intimacy between members of the same sex.”

However, that statement has since been removed. The current Salvation Army website has a section detailing its goal to serve the LGBTQ+ community.

The new statement on the site reads, “All people are deserving of Christ’s love, regardless of race, gender, ethnicity, sexual orientation, or gender identity.”

In November 2019, in an op-ed for USA Today, David Hudson, the national commander of the Salvation Army, denied claims that the organization discriminates against the community, even pointing to the Las Vegas safety dorm as an example of the services provided to the LGBTQ+ community.

While there are not many LGBTQ+ specific shelters operated by the Salvation Army, McDonald believes that the nature of the organization’s mission means that is going to change.

“If they have the space, I’m sure we’ll start to see more of them start to transition in that way,” he said. “I think you need to look at our mission, and our mission is that we meet human needs in Christ’s name without discrimination, and the Salvation Army lives by that.”

Space and budget are big factors in what services any nonprofit can provide, and the Salvation Army is no different. Each local Salvation Army branch is its own entity with its own operating budget, and the Southern Nevada branch operates its safety dorm out of its own budget with no federal assistance.

“We all have to rely on our own community to help us stay afloat and allow us to have the programs that we have,” said McDonald.

The Southern Nevada campus, located downtown in the “Corridor of Hope” where many service providers for the homeless are concentrated, is five acres and houses the nonprofit’s homeless, vocational, family and veteran services as well as transitional housing apartments. Between veteran, vocational, and homeless services, the campus sleeps close to 600 people every night. Additionally, the kitchen and dining hall serves between 800 and 1,000 meals per day.

According to McDonald, partnerships with other local foundations and companies are vital to maximizing the effectiveness of the social services that the Salvation Army has to offer. The safety dorm is no exception.

“At Bright Star, our mission is to help out LGBTQ homeless youth, 18-24, get them off the streets, get them to some kind of balanced environment or transitional environment until they get back on their feet again and move on with their lives,” said Claude Raffin, president and founder of the Bright Star Foundation.

The foundation estimates that each year, 110,000 LGBTQ+ youth experience homelessness in the U.S. and that Las Vegas had the second highest number of any city as of 2015, just behind Los Angeles. Homeless LGBTQ+ youth also face higher rates of mental health problems and are more often victims of sexual violence.

Because of Bright Star’s interest in protecting this vulnerable population, when informed about the Salvation Army’s safety dorm project, the foundation was immediately interested in getting involved.

Bright Star has been partnered with the Salvation Army to help fund the safety dorm. The organization gives $1,000 a month to cover the dorm’s utilities. When he found out the facility was hoping to get more beds and be able to extend services to more people, Raffin was happy to fund the efforts himself.

“I said I would do it, so I did it,” he said. “I donated the money to Bright Star and then Bright Star took the check to the Salvation Army.”

According to a statement from John Waldron, executive director for The Center, investing in and focusing on housing issues are issues their organization has a renewed focus on thanks to the Las Vegas City Council’s recently enacted legislation that criminalizes sleeping or camping downtown, or staying on sidewalks during designated cleaning hours.

“Housing, in particular, is an area of focus for us given the recent homeless regulation in Clark County,” said Waldron. “Considering the high population of LGBTQ individuals that are impacted by such standards, we have a vested interest to do whatever we can to help.”

McDonald is proud not only of the services provided by the safety dorm but also of the community created by its residents.

“We have all different genders in here, all different sexual orientations, and the cool thing is that everybody gets along,” he said.

A big part of the transitional services the Salvation Army seeks to provide, he says, is ensuring that individuals build a network and form bonds. The safety dorm is one way to build those, bringing together members of the LGBTQ+ community who face similar struggles.

“The individuals who are staying here, they respect the dorm, and we respect them,” said McDonald. “It’s a great relationship.”