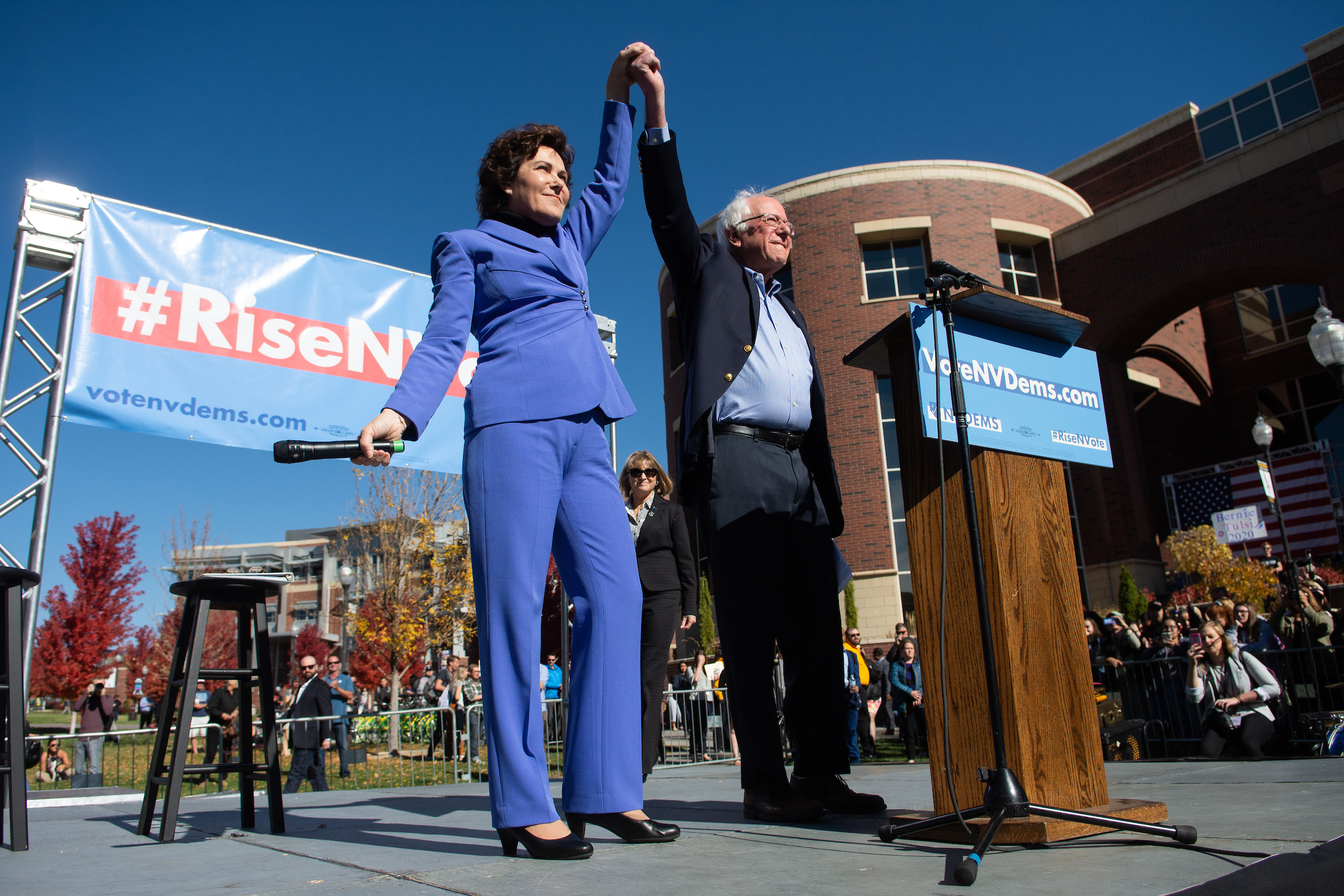 U.S. Sen. Bernie Sanders had a message for Nevada progressives facing a midterm election with a relatively moderate slate of Democratic candidates: Your beliefs don’t mean anything unless you vote.

At two rallies on Thursday in Reno and Las Vegas, Sanders urged young people, who he referred to as the “most progressive generation in the history of America,” and other acolytes to get involved politically in a year that Democrats are fighting for every vote in an attempt to wrest control of a U.S. Senate seat and the Governor’s Mansion from Republicans. Sanders’ message at both rallies — which touched on frequent themes from his 2016 presidential campaign including a single-payer health-care system, free college tuition and a $15 minimum wage — was a departure from the relatively moderate message Democrats in the state have been preaching on the trail.

Sanders, an independent senator from Vermont, first rallied between 800 and 1,000 students and supporters Thursday morning at the University of Nevada, Reno before heading south for an evening event at the Las Vegas Academy of the Arts, attended by roughly 850 people. At both events, he touted to his progressive base the importance of electing Rep. Jacky Rosen, a moderate Democrat, to the U.S. Senate.

At the Reno rally, Sanders said that electing Rosen would help end “one-party rule” in Washington and stymie President Donald Trump’s agenda, including a tax reform bill he signed into law in December that Sanders said only helped billionaires. He said the wealthy Koch brothers and other Republican donors are “flooding airwaves in Nevada and all over this country” in an attempt to buy the election and ensure the government protects corporate interests instead of those of working families. (It’s worth noting that pro-Democratic outside groups have actually outspent their Republican counterparts in Nevada’s U.S. Senate race by about $11.5 million.)

“Today we say to the 1 percent and to the billionaires that their greed has got to end and that we need a government that represents all of us, not just the few,” Sanders said. “And that’s what this campaign is about.”

“Our job in 2018 is to have the highest midterm voting, and you can do that. You can do that as soon as we’re finished right here by marching over to the Joe and casting your ballot,” Sanders said, referring to the polling location at the Joe Crowley Student Union on campus.

At one point during the Reno rally, Trump supporters hung campaign signs from the third floor of a parking structure overlooking the lawn where the event was held. After drawing jeers from the crowd, Sanders turned to the supporters and addressed them directly.

At both events, Sanders mapped out that agenda, including a $15 minimum wage, wage equality in the workplace, free tuition for public colleges and universities, lowering the student debt, addressing climate change and decriminalizing marijuana. That agenda also includes a single-payer health-care system, or Medicare for all, a proposal that moderate Democrats, including Rosen, have been slow to warm to, instead voicing support for a nationwide public health insurance option.

“A few years ago when I was on this campus and I talked about the need to guarantee health care to all people and I talked about Medicare for all, it was seen as a radical idea, an extreme idea. A poll came out just the other day — 70 percent of the American people now support Medicare for all,” Sanders said at the Reno rally, as Rosen applauded behind him on the stage.

Health care has been a frequent theme of Rosen’s on the campaign trail as she has needled her opponent, Republican U.S. Sen. Dean Heller, over attempts to repeal and replace the Affordable Care Act and insinuated that he would leave people with pre-existing conditions vulnerable. Speaking before Sanders at the Reno rally, Rosen reiterated her belief that Heller would continue to side with Trump and Senate Republican leadership over Nevadans.

“Health care is a right, not a privilege for the wealthy or the well-connected,” Rosen said.

In Las Vegas, the audience interrupted Rosen multiple times with chants of “Medicare for all.” Each time, she patiently waited before continuing her speech but did not voice her thoughts on a single-payer health-care system.

It was a contrast from the rallying cry that Rep. Dina Titus — who described herself as someone who was called a progressive “back when being progressive wasn’t cool” — gave at the Las Vegas rally. Titus is the only member of Nevada’s congressional delegation who has signed onto Medicare-for-all legislation.

“We want a government that says yeah, health care is not a privilege, it’s a right and we want Medicare for all,” said Titus, who was echoed by enthusiastic chants of “Medicare from all” from the crowd. (Titus wanted to run for the U.S. Senate this year and said last month she regrets not doing so every day.)

Like Medicare for all, Sanders said that where his proposals during the 2016 campaign were seen as “radical” or “fringe” ideas, they have now become more mainstream, including a $15 minimum wage. At the Las Vegas rally, he pointed to a button he said had been given to him by the Culinary Union, saying that “one job should be enough.”

“In Nevada and in Vermont and all over this country we have got to be really clear that if a person works 40 hours a week that person should not be living in poverty,” Sanders said.

On climate change, Sanders said that a recent report from the United Nations that warned that the world has only a dozen years to limit the effects of climate change should “scare the bejesus out of every person on this Earth.” He also touched on criminal justice reform, saying that it makes more sense form a financial perspective for the country to invest in jobs and education than prisons and incarceration.

Abby Longsdorf, a pre-nursing student who attended the Reno rally, plans to vote at the student union for the first time on Election Day. Longsdorf said that she liked that Sanders talked about climate change and framed health care and a college education as rights.

“In today’s society, it’s significantly harder to thrive without a college education,” she said.

Longsdorf described herself as politically active but said that she was looking forward to expressing her opinions at the poll.

“I finally get to make a difference,” she said. “Now I can finally put my voice onto the ballot.”

After the Las Vegas rally, Kathy Lauckner, a 61-year-old who backed former Secretary of State Hillary Clinton in the 2016 presidential election, said that she was happy that Sanders had come out to rally for Nevada Democrats and felt he was “trying to bridge the sides.” She said she was enthusiastic about voting in the election this year, including supporting Rosen who she praised as a “fast learner.”

Her husband, 64-year-old Paul Monar, has been a Sanders supporter since 2010 and ended up voting “none of these candidates” in the last presidential election after the Vermont senator lost the Democratic primary. He said he already voted a straight Democratic ticket in Nevada this year but believes the state party is a little too involved in selecting candidates instead of letting the primary process organically play out.

“I get a little upset that people are saying they’re progressives. That’s what everybody is running on,” Monar said. “Everybody can say they’re running on this platform, but you have to have the heart in it.”