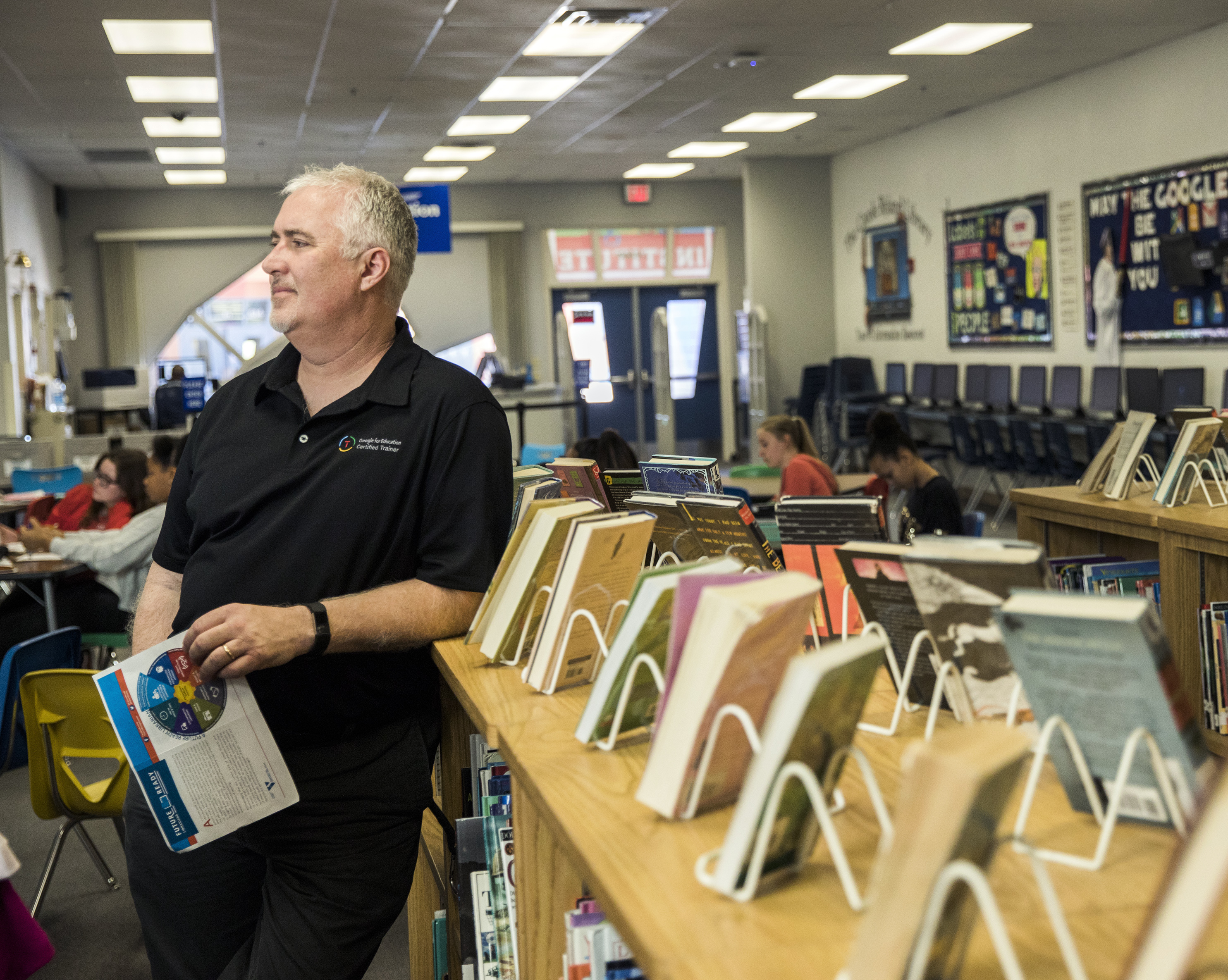 Gone are the days of libraries being silent zones, used for studying or reading only.

Enter the Bob Miller Middle School library, and you’ll find students working together on projects and teachers giving instructions aloud. Reading, researching and innovating intersect in this modern environment surrounded by books and technology. The blended learning space recently served as ground zero for a sixth-grade project in which students created advocacy videos about water conservation.

“My role is to get teachers and students to a place where they can use those 21st century skills,” the school’s certified teacher-librarian, Scott Hensley, said. “I’m giving them the tools.”

Hensley has served as the school’s librarian since the building opened 17 years ago — a time period marked by rapid technology improvements and increasing reliance on the Internet. Now, every student in this middle school carries a Chromebook.

As far as Hensley is concerned, the digital age only exacerbates the need for a school librarian, which he describes as a position that far exceeds “book manager.”

“When I got here, librarians came with a flagpole,” he said. “They were the last to be considered when there were budget cuts because we correlate to student achievement so well.”

That’s no longer the case. The number of Clark County schools lacking a certified librarian has grown in recent years, a situation library advocates call a "quiet crisis."

Several of those schools are in rural areas with lower enrollments, but the others are spread out across the valley.

Slykerman, a certified teacher-librarian at Liberty High School, said the decline began in the 2012-2013 academic year, with more buildings becoming librarian-less over the coming years. Between the 2016-2017 school year and the current one, five elementary schools, one middle school and three high schools did away with the position, she said.

That’s why Slykerman recently brought the situation to the attention of Democratic gubernatorial candidate Steve Sisolak. She’s on a campaign to raise awareness about the so-called quiet crisis. She has visited the Progressive Summit and spoken to various elected officials and members of Nevadans for the Common Good as well.

“People that know the importance of school libraries and information literacy will do something about it,” she said.

The Clark County School District doesn’t require schools to staff a librarian, but if they don’t, they’re still responsible for meeting literacy content standards. Teacher-librarians, according to the district, serve as the information literacy and technology educator, reading advocate, a school leader and collaborator and library program manager.

A bill sponsored by Sen. Becky Harris in the 2017 session proposed changing that. SB143 would have required public schools, including charters, to maintain a school library and staff a certified librarian, except in specific circumstances. Ultimately, the bill didn’t move forward. Some lawmakers had expressed concern about the financial burden it would entail.

But as the calendar inches toward the 2019 Legislature, library advocates are making another push to see a similar bill drafted and passed.

“I firmly believe this needs to be a bipartisan bill,” Slykerman said. “This issue is not a party line. This is education. This is literacy.”

At Bailey Middle School in northeast Las Vegas, students participate in an “escape room” to learn about context clues, scavenger hunts to identify books in various genres and detective activities to decipher good sources from bad ones on the Internet. All of this occurs in the library.

“I think there’s a misconception that we just check books in and check books out,” said April Pollard, the school’s certified teacher-librarian. “Honestly, that’s the least of what I do.”

This is Pollard’s first year at Bailey Middle School. She landed there after years working at a high school, a short stint as a digital learning coach and another year at a different middle school. The recent moves, she said, were the result of schools deciding to cut the librarian position.

Pollard said she’s thankful to be at Bailey Middle School this year, where the administrators value her position. They brought her in, she said, to reinvigorate a “culture of reading” at the school, which serves a large number of students from disadvantaged backgrounds.

She has started “word of the day” contests and is stocking the library with more “high interest, low level” books — easier yet age-appropriate books for students who aren’t reading at grade level. Above all, Pollard doesn’t want students to stop enjoying books simply because they’re embarrassed about their reading skills.

“I’m trying to make the library the heart of the school, and I think it’s really becoming that,” she said.

Before the school day even begins, Pollard said roughly 100 students trickle into the library. Another 50 come during their lunch period.

“The thought that libraries are empty ghost towns is just a fallacy,” she said. “There are a lot of kids that it’s their safe space.”

Hensley sees his middle school library serving a similar social purpose. It’s the place students like to come early in the morning to study, hang out or read. But he’s a fierce defender of libraries and librarians for another reason, too: Studies have shown that student achievement increases when a school has a librarian.

According to a 2012 report by Library Research Service, Colorado schools that included a certified librarian between 2005 and 2011 generally had more students who received an “advanced” score on the reading portion of state standardized tests in 2011.

Hensley said the Bob Miller library has 22,000 books worth $250,000 as well as audio and e-books. He recently reorganized the library to resemble a bookstore, with inventory organized by genre: sports, realistic fiction, romance, graphic novels, fantasy and science fiction.

But the school’s library is also the place where students hone skills for using Google documents and evaluating online information. Hensley said the latter is particularly important in the age of “fake news.”

“Students are technology literate when they come to Miller,” he said. “But they are informationally illiterate.”

The American Association of School Librarians is in the beginning stages of studying state policies regarding school libraries and librarians, said the organization’s president, Steven Yates. He doesn’t think eliminating school libraries or the position is a widespread movement in K-12 education, but he acknowledged that’s happening in more places than just Southern Nevada.

“We definitely are sad to hear it,” he said.

Librarians are essentially “chief access officers” at their schools, ensuring that students and staff have the resources and technology skills they need, he said.

Even so, the principal of a Clark County elementary school that no longer has a librarian said there’s just as much of an emphasis on reading.

Over the summer, Kay Carl Elementary School switched its library and physical-education rooms — a decision approved by the school organizational team. Principal Brenda Swann said the room swap occurred after the school’s beloved librarian announced he was taking a position at a middle school.

She said the move was about maximizing space — not downgrading the importance of reading. The school doesn’t have a certified teacher-librarian anymore, but the newly located library is open longer each day and contains an aid, Swann said. Teachers bring their students to the library weekly, and the school still spends $5,000 on replenishing books each year.

The new space boasts colorful murals on the walls and an alcove that’s been turned into a “Magic School Bus”-themed reading nook, complete with actual bus seats.

The decision, however, drew some ire from community members on the school’s Facebook page.

“I received the most horrible posts and stuff,” Swann said. “You would have thought I stole the souls of small babies. I’m totally for books and libraries. We just needed to restructure.”

As for the students, Swann said they’re “delighted” with the new set-up and look forward to visiting the library and reading in the “Magic School Bus”-themed nook.

Swann said she wishes skeptics would reserve judgment and visit her school before jumping to criticisms.

“You have to follow your own brick road,” she said, paraphrasing a line from the famous children’s novel, The Wizard of Oz. “Sometimes it’s just not what everyone else is doing.”

Steve Sisolak has donated to The Nevada Independent. You can see a full list of donors here.
SHARE