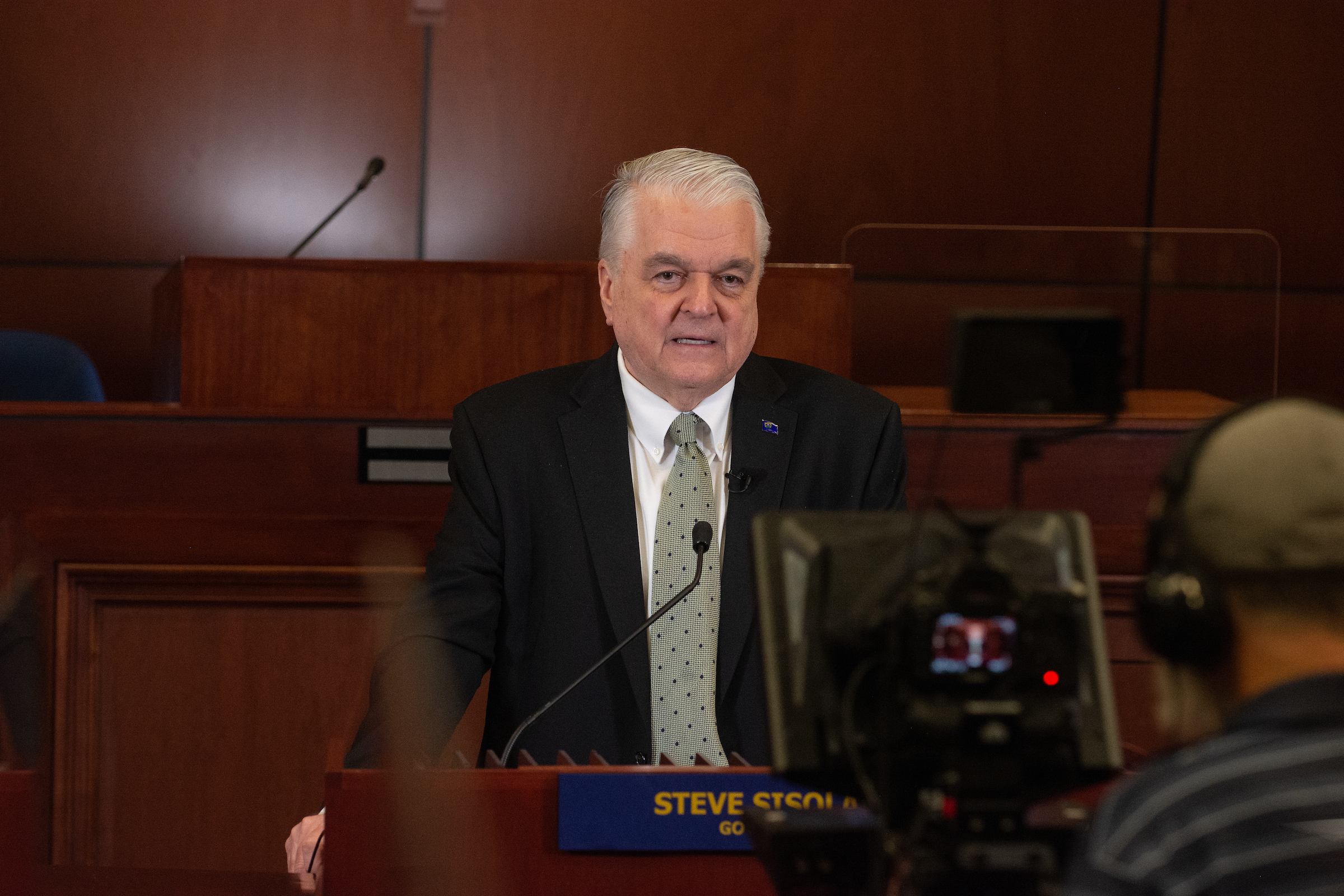 Earlier this month, Jeff Berns, the CEO of Blockchains LLC, a tech company that is pushing an ambitious legislative proposal to create a new type of local government outside Reno, said he pitched Gov. Steve Sisolak on the idea after developing a “friendship” with the Democratic governor.

But since the interview in early March, the governor’s office stonewalled or provided non-answers to The Nevada Independent about Sisolak’s relationship with Berns and meetings with the company, which hired his wife’s economic consulting firm, Hobbs, Ong & Associates.

Not until this week, nearly three weeks after The Nevada Independent began asking questions, did the governor’s office address the relationships that intersect with Blockchains’ proposal, a massive project that is being cast as an important part of the state’s post-pandemic economic strategy.

In addition to meeting with the governor last year, the company donated $10,000 to Sisolak’s 2018 campaign and $50,000 to a political action committee affiliated with Sisolak in 2019.

Sisolak spokesperson Meghin Delaney said in an email Wednesday that “campaign contributions have no bearing on decisions the governor makes. Since taking office, the governor's decision-making is focused on what is best for the state and for its residents, regardless of where the ideas come from.”

When asked about Berns’ characterization of a “friendship” with Sisolak, Delaney wrote in an email on Monday, nearly three weeks after The Nevada Independent first asked: “Jeff and the governor share common goals for the State including responsible and impactful economic diversification, workforce expansion and development, and protection of natural resources.”

The governor’s office did not provide more information about the relationship or answer a question about how many times Berns and Sisolak met last year.

But Delaney said on Wednesday that “one of the governor's top priorities is to recover our economy and develop our workforce, and his door will always be open to any private sector leader or CEO who is looking to expand their business, relocate to the state, and most importantly, create jobs for Nevadans.”

Delaney added that “it is common practice in Nevada and every other state in the country for private sector leaders to bring proposals to state and local governments.”

She stressed that the governor and First Lady Kathy Sisolak, who is a director at Hobbs, Ong & Associates, do not discuss state issues that the firm might be involved with. The firm worked on an economic impact report for the project, along with Applied Analysis, another consulting firm, and did so “independent from the governor’s office,” Delaney said in a statement on Monday.

The first lady, in an email Tuesday, said the firm “has a policy of segregating work assignments to ensure that I am not engaged in any work performed for the State of Nevada.”

With Blockchains, Sisolak added, the firm’s work was conducted without her involvement. She said that she never discussed the proposal with the governor, and the firm did not brief the state.

Blockchains owns about 67,000 acres of land in and around the Tahoe Reno Industrial Center, home to the Tesla Gigafactory and other large-scale operations, east of Reno. The company, with Sisolak’s backing, is seeking legislation that would allow it to break away from an existing county government and create a new type of local government, known as an “Innovation Zone.” The company said such a move was necessary to develop a “smart city” of about 36,000 residents.

In the early part of 2020, as the COVID-19 pandemic hit, Berns said that Sisolak approached him about serving on a committee working to acquire personal protective equipment. Berns said he declined and recalled telling the governor that he would begin developing a concept that might bring more revenue to the state. That concept turned into the proposal for Innovation Zones.

Berns said that he presented the concept to the governor around Labor Day. In January, Sisolak included a line in his State of the State speech touting the proposal and Blockchains LLC.

“Following the passage of my Innovation Zone legislation,” Sisolak said, “Blockchains LLC has committed to make an unprecedented investment in our state to create a smart city in northern Nevada that would fully run on blockchain technology — making Nevada the epicenter of this emerging industry and creating the high-paying jobs and revenue that go with it.”

The governor’s office has not provided a timeline of the events that led to that proposal.

On Monday, Delaney said the proposal was “the product of months of extensive analysis of the economic impact of a smart city developed using blockchain technology, review of different types of political subdivisions around the country and globally to find an optimal model for its development, and evaluation of the benefits and challenges surrounding its creation.”

Jeremy Aguero, a principal analyst with Applied Analysis, the firm that assessed the economic impact of Blockchains’ proposal, said he attended multiple meetings last year with state officials. The governor, he said, was not present during the early meetings. Throughout the process last year, the proposal was fleshed out and refined as questions about Innovation Zones arose.

When the state unveiled the proposal to the public at a roundtable in February, Sisolak was joined by Michael Brown, who leads the Governor’s Office of Economic Development, and Aguero. Since then, the administration has provided little information about the proposal.

On MSNBC Sunday evening, Sisolak was asked about the proposal.

Sisolak said that “it’s something that we definitely need to have the discussion and the debate about. You need to look at new bold and creative ideas when it comes to diversifying the economy.”

Other companies, Sisolak added, are also looking at the idea. The governor’s office did not reply to a question about what companies the governor was referring to. The proposal would apply to companies with large landholdings that are developing innovative technologies.

To apply for an Innovation Zone, a company would have to own more than 50,000 acres of land, make an initial $250 million investment and commit to investing at least $1 billion over ten years, according to draft legislation and a website promoting the concept. An applicant looking to form an Innovation Zone must also identify a way to generate new revenue for the state.

“We will absolutely have the water there otherwise they couldn’t go ahead with the project,” Sisolak said, noting that the company had “made arrangements” to bring water to the area.

As The Nevada Independent reported, Blockchains acquired water rights about 100 miles north of the area where it owns land. Before importing the water, the company would be required to go through a rigorous application and permitting process with state water officials and federal land managers.