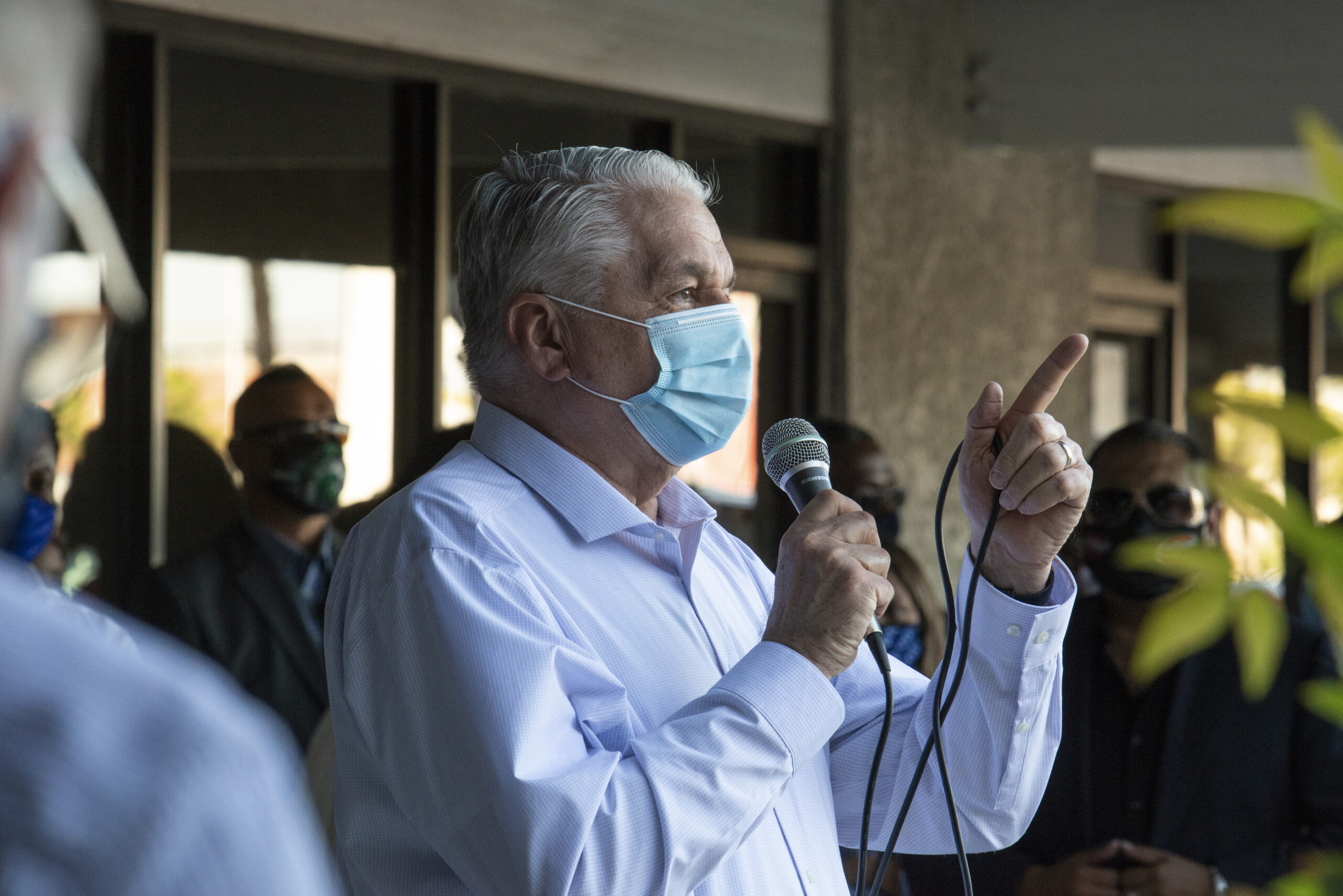 Gov. Steve Sisolak announced on Sunday that he is extending current coronavirus health and safety restrictions for another month and putting in place a new moratorium on evictions through the end of March.

But he also spent a significant portion of the afternoon press conference defending his decision to not go further and implement another statewide shutdown, like Nevada put in place in the spring, citing a lack of economic support from the federal government. He specifically criticized a recent White House COVID Task Force report that suggested that state and local governments aren’t doing enough to stem the tide of COVID-19 and put the onus back on the federal government, saying that states are unable to do more without federal financial assistance.

“The problem we have is that the mitigation policy that most successfully ‘stemmed the tide’ in Nevada was our complete shutdown,” Sisolak said. “And for the White House and feds to send that recommendation without including a big check for Nevadans — a plan for providing our state with funding to give our families a safety net in this time of great tribulation is downright out of touch and offensive.”

He also framed the recent White House COVID Task Force report as a “stark departure” from the messages and actions from the White House over the last nine months that “contradicted and undermined recommended mitigation measures touted by respected public health officials throughout the country.” He said that his “blood boiled” when he read the report.

Sisolak said that a second shutdown would be “unrealistic without additional support” and that a state economist has said that a return to full stay-at-home restrictions without the savings and assistance the state had in the spring “would put us in a position that would be as bad, or worse, than the Great Depression.”

“If we could write a check to every Nevadan right now to provide them the ability to stay home and stop the spread, I’d do it,” Sisolak said. “But we can’t.”

In light of that, Sisolak framed his more modest announcements on Sunday as part of a “balancing act” between the record case numbers and hospital strain the state is seeing and the economic hardship that many Nevadans are experiencing.

The new eviction moratorium, which he said was recommended by his own task force, will begin just after midnight on Tuesday, apply to tenants who are unable to pay their rent and extend through March 31. Sisolak said that it will not, however, prohibit certain evictions, including lease breaches for unlawful activity or nuisance.

“When people are evicted, it is impossible to stay home. They are out looking for jobs and housing to desperately save their families,” Sisolak said. “They will spread COVID-19 unintentionally, because they have no options.”

Sisolak acknowledged the economic impact that the eviction moratorium will have on landlords. However, he said evictions could force people into crowded living situations and overwhelm existing shelters. He asked landlords to sacrifice again as the state makes what is hopefully a final push through the last surge of the virus.

Under the month-long extension of the current statewide pause, which has been in effect since late November, occupancy in restaurants, bars, gyms, casino gaming floors and a host of other gathering spots such as libraries, museums, bowling alleys and aquariums will remain limited to 25 percent of capacity. Indoor dining establishments have also been mandated to require reservations, and no more than four people can be seated at a table together.

Other retail establishments, including indoor malls, will continue to operate at 50 percent capacity, with big-box stores still required to station an employee at entrances to count customers.

Additionally, public gatherings will still be limited to 50 people or 25 percent of capacity, whichever is less, a requirement that applies to places of worship — in addition to other venues including indoor movie theaters, live theater performances, casino showrooms, weddings, funerals and more — but does not apply to in-person learning in K-12 schools. Private gatherings will still be limited to 10 people, with attendance restricted to a maximum of two households.

Sisolak did, however, leave the door open for tougher restrictions if the COVID-19 situation in Nevada worsens. But like the last few months, he called on Nevada residents to do their part in mitigating the spread of the virus and avoiding any harsher lockdowns.

“I need to be clear: if officials and experts agree that our trends are going beyond our ability to respond, I will be forced to come in front of all of you again with tougher actions,” Sisolak said. “I believe we can avoid these actions if we all commit to it.”

“There is no doubt our hospitals are feeling an increased strain due to an increase in COVID patients, and our health care workers are too,” Sisolak said. “They need your help.”

Sisolak also said that Nevada expects to receive its first shipment of the COVID-19 vaccine from Pfizer on Monday and that plans are in place to distribute the first allocation of the vaccine to frontline health care workers immediately.

The governor’s decision to extend the moratorium on evictions comes as a moratorium issued by the Centers for Disease Control and Prevention is set to expire at the end of the month. It’s been the only protection for tenants since the state-level moratorium expired in mid-October, but critics say it has too many loopholes, and more conservative interpretations of the measure have allowed thousands of evictions to proceed in the last two months.

In the first six weeks since the state moratorium lifted, nearly 6,000 eviction cases were opened and nearly 3,000 evictions were granted just in the Las Vegas Justice Court, one of 40 such courts in the state. The volume of evictions there in October and November are at record levels dating at least 10 years back.

Researchers project that more than 400,000 people in Nevada will be at risk of eviction by the end of the year because of a struggle to pay, just as a current round of rental assistance money is set to expire. That’s more than one-third of Nevadans who live in renter households.

In Clark County, about $73 million of the approximately $100 million in funds available to help people pay overdue rent has been spoken for, and nearly 12,000 applications for the money were in the queue as of Dec. 3. The county has implemented a new process that allows landlords to seek mass approvals on behalf of tenants who have fallen behind on payments, rather than requiring tenants to initiate and follow through with much of the process.

In the remainder of the state, more than 6,000 applications for rental assistance have been submitted, but only about a quarter have been approved and agencies project they will not have their full federal allotment of rental assistance out the door by the time the deadline to spend it arrives.

The expiration of aid happens just as several unemployment programs — including Pandemic Unemployment Assistance (PUA) for gig workers and another for people who have exhausted their allotment of regular state-paid benefits — will disappear. The PUA program pays claimants anywhere from $181 to $469 a week; combined, the two vanishing programs are supporting more than 177,000 people and pumped $53 million into the Nevada economy just last week.

One of the looming questions the past few weeks has been whether Sisolak would shut down casinos again, a move that governors in other states have taken. He hasn’t gone that far yet, acknowledging that the previous 78-day closure dealt a huge blow to the state’s economy.

The governor said it’s not a matter of worrying about gaming companies’ stock prices or the bank accounts of their executives. It’s the ripple effect downstream that worries him — the plight of blackjack dealers, valet drivers, housekeepers, cooks and so on.

“I lose sleep at night because when we were under a stay-at-home order in the spring, we lost a quarter of a million jobs in three months in this state,” he said.

Sisolak said if the state has to shut down the casino industry again, it will lose $52 million a month in gaming taxes. He went on to say prioritizing the state’s economy or health is a “false choice” given the related consequences.

“If you don’t have a job, if you can’t provide for your family, if you lose your home, if the state has no safety net to help, people will not be healthy,” he said. “These aren’t binary choices.”

To that end, the governor flamed congressional leaders in Washington, D.C., saying they haven’t been willing to compromise and greenlight help through the pandemic. Instead, he said the past nine months have proved Nevada must persevere solo and “get through this on our own.”

Congress has been deadlocked over another pandemic aid package. Democrats desire funds for state and local governments, while Republicans have been asking for inclusion of a liability shield for businesses. They’ll resume negotiations this week.