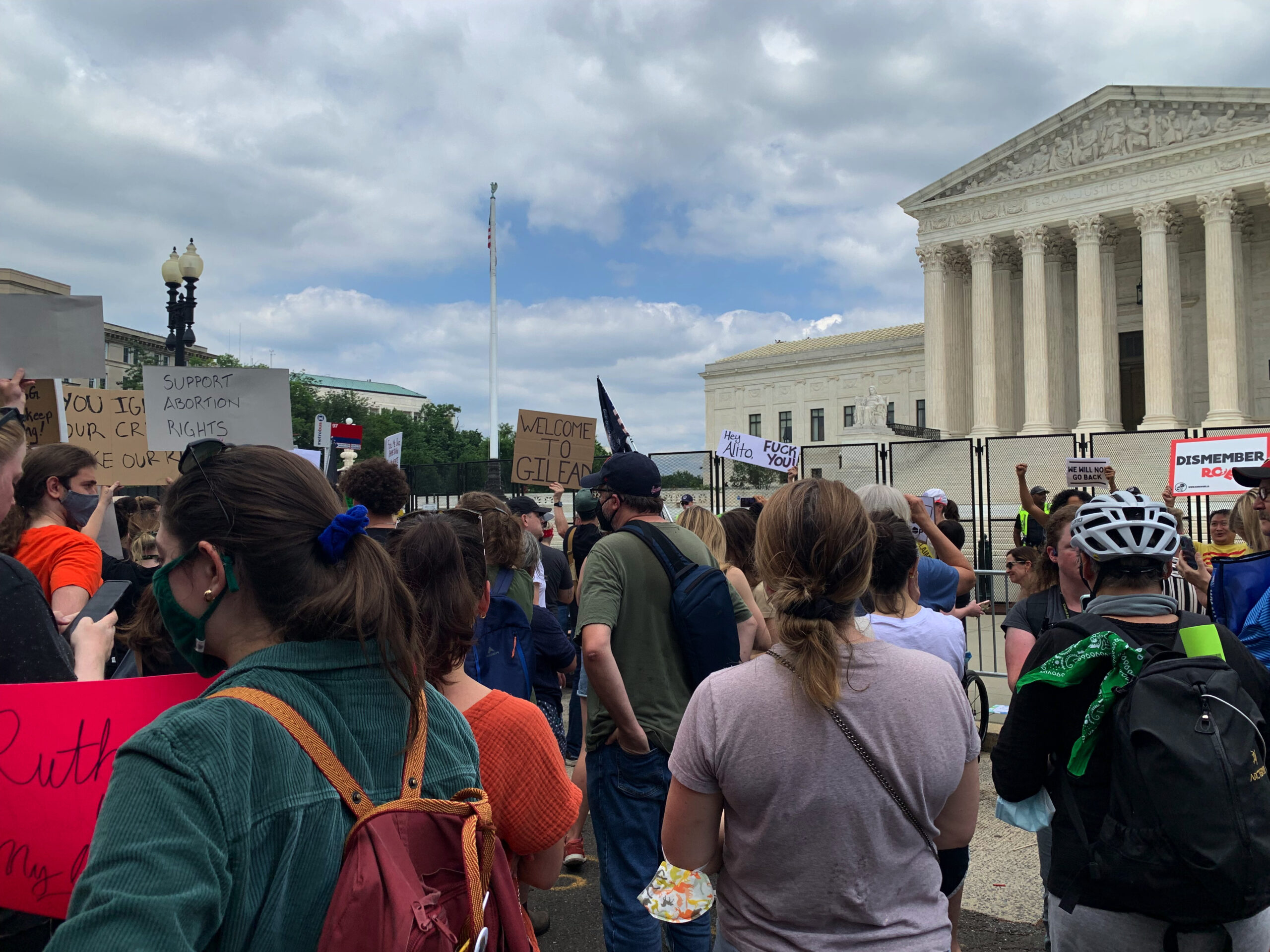 The Supreme Court issued an expected opinion Friday overturning a 50-year constitutional right to abortion and igniting an issue that could play a significant role in the November midterm elections.

Sen. Catherine Cortez Masto (D-NV), considered the most endangered Senate Democrat of the 2022 cycle, said it was “a devastating day for women in America.”

"People in dozens of states across the country will live under extreme abortion bans, and access to critical care will be threatened all across the U.S.," she said in a press release. "This is absolutely unacceptable. Women need the full range of reproductive health services to make important decisions about their physical and mental health, their bodies, their economic future, and their families' well-being."

Her Republican opponent, former Attorney General Adam Laxalt, called the decisions a “historic victory for the sanctity of life and the principles of democratic self-determination.”

“The Supreme Court has never had the expertise nor the authority to unilaterally legislate on abortion,” Laxalt said in a press release. “After more than 50 years, that responsibility is poised to finally return to its rightful owners: the American people and their elected representatives.”

The race will be intense. Cortez Masto only won her seat by 2 percentage points and the GOP sees an opportunity. It could also determine control of the U.S. Senate, where the parties split the 100-seat chamber 50 to 50. Democrats control the Senate through President Joe Biden's 2020 victory, which made Vice President Kamala Harris president of the Senate and a tie-breaking vote.

The Supreme Court decision is not expected to affect abortion access in Nevada, where the procedure is available during the first 24 weeks of pregnancy. That law went into effect after a 1990 referendum and would require another statewide vote to change.

But the ruling puts the issue on the ballot in a state where registered voters describe themselves as pro-choice by a 2-to-1 margin. Along with a senator, Nevadans will be choosing a governor, an attorney general and four members of the U.S. House.

“The majority of Nevadans agree, and I will continue to fight for reproductive rights and push back on extremist laws that deprive people of essential health care,” Cortez Masto said.

Laxalt stressed it was a settled issue in Nevada and downplayed the significance of abortion as an election issue compared with record-high inflation and gas prices.

“The people of Nevada have already voted to make abortion rights legal in our state and the Court’s decision on Roe doesn’t change settled law and it won’t distract voters from unaffordable prices, rising crime or the border crisis," Laxalt said.

But that doesn’t mean Nevada is safe from attempts to undo its legality. Nevada Right to Life Executive Director Melissa Clement said in an interview Friday that, while she and the pro-life movement are celebrating the landmark decision, she ultimately wants to change the Nevada law.

Clement was attending the National Right to Life Convention in Atlanta when the decision came down. She said it was a bittersweet victory because she celebrated with people from states where abortion is now illegal, but "nothing changes in Nevada," Clement said.

“I foresee a time when this will change,” she said, adding that “it is not a quick process. It is not going to happen in the next six months.”

Clement also noted that she believes abortion is an issue in the upcoming election and wants anti-abortion senators and representatives in Congress.

“Take a good look at what the Democrats say in the next 48 hours, because it will tell people what is their biggest concern,” Clement said. “It isn't making it easy to raise a family on a fixed income.”

She also praised former President Donald Trump, who appointed three anti-abortion justices to the Supreme Court, and Senate Minority Leader Mitch McConnell (R-KY), who managed to get them confirmed by the Senate.

“Those two men are heroes,” Clement said. “This is a victory for them for sure and the countless pro-life poeple who have worked so hard over the last few years to elect pro-life” officials.

The decision, in a case known as Dobbs v. Jackson Women's Health Organization, overturned Roe v. Wade, which established a right to abortion in 1972, and Planned Parenthood v. Casey, which upheld the Roe decision in 1992. Five justices, including Samuel Alito, who authored the opinion, Clarence Thomas, Neil Gorsuch, Brett Kavanaugh and Amy Coney Barrett made up the majority. The court voted, as part of the case, 6 to 3 to uphold Mississippi’s abortion ban after 15 weeks. Chief Justice John Roberts joined with the five other conservatives on the 15-week ban vote.

Incumbents and candidates weigh in

Democrats, including Gov. Steve Sisolak, who is running for re-election, cast the ruling as a blow for women and a stark choice for voters.

“This decision is devastating for tens of thousands of Nevada women, but it’s exactly what my opponent wanted,” Sisolak said. “I’ve been unwavering in my commitment to protecting the right to abortion and in Carson City, we’ve made progress expanding access to reproductive freedom and to critical contraceptives.”

Republican gubernatorial candidate and Clark County Sheriff Joe Lombardo said it will be up to the voters to decide the future of abortion rights, just as they decided to codify Roe into law.

“I’m a Catholic and pro-life and I believe that most Nevadans — no matter what their personal background is — agree with me and want fewer abortions, not more,” Lombardo said in a statement from his campaign. “As the U.S. Supreme Court decided today and as Nevadans decided long ago, this important issue was and should be decided by Nevada voters, and moving forward I trust them to make the best decision four our state.”

Democrats, including Sisolak and Cortez Masto, have argued that the right to privacy hangs in the balance unless Democrats retain the state capitol and expand their majorities in the U.S. House and Senate.

Democrats have also raised the specter of a potential federal ban should Republicans win control of Congress. They also are concerned that the rulings on same-sex marriage and contraception could be overturned given the precedent of overturning a constitutional right to abortion after 50 years. Those concern come as Thomas, in a concurring opinion, said that the court should reconsider decisions on contraception and gay marriage, which he believes were “demonstrably erroneous.”

Democratic Attorney General Aaron Ford has been a vocal supporter of abortion rights. On Thursday, Ford was one of seven state attorneys general who met with the vice president in Washington to discuss abortion rights.

“Unfortunately, it came a day before one of the most consequential rulings in American history, when the Supreme Court decided to cruelly strip away a constitutional right that has stood for almost 50 years,” Ford said in a statement provided by his office. “At yesterday’s meeting, the attorneys general recommitted to our fight to keep reproductive rights safely accessible for all Americans, and we will fight back in any way we can.”

Ford added that he is working in Nevada “to warn against complacency, enhance safety and provide sanctuary for those exercising their freedom and liberty to obtain an abortion.”

His GOP opponent, Sigal Chattah, tweeted her commitment to enforce Nevada law even though she is anti-abortion.

“As Nevada’s next Attorney General, I will faithfully protect and defend the laws of the State whether I personally agree with them or not,” Chattah said.

All four of Nevada’s House members are up for election and the three Democrats all lamented the ruling and warned of further erosion of constitutional rights.

Rep. Dina Titus (D-NV) said that the law was overturned despite promises by the justices during their confirmation hearing to respect precedent.

“Abortion rights are human rights and should not be subject to the political whims of the few,” Titus said in a release.

“I support returning the question of abortion back to the States and to the people to decide,” Robertson told The Nevada Independent in May. “This was a Federal power grab that should never have happened. Even people who support abortion, like Ruth Bader Ginsburg, agreed that Roe had constitutional problems.”

Rep, Mark Amodei (R-NV), the congressional delegation’s lone GOP member, said his voting record reflects his pro-life dispositon and that if the law is to be changed in Nevada, the proper process must be followed.

“If Nevadans wish to change those abortion laws to reflect the Dobbs v. Jackson ruling, this must be done through a proposed ballot initiative,” Amodei said.

“We will come out in droves in November to protect our rights and keep pro-choice leaders in office up and down the ballot,” Lee said.

Becker, in May, told The Nevada Independent that she would support overturning the law and believed states should decide abortion policy, though she also was concerned by the leak of the draft opinion earlier in the month.

“The unprecedented leaking of a U.S. Supreme Court opinion has done irreparable harm to our judicial system,” Becker said.

“For the first time in history, the highest court in the land has rolled back a right it had previously guaranteed,” Hosford said in a release.

“Why have we abandoned all personal responsibility when science has made it so much easier to avoid pregnancy?  Why have we signaled that an abortion is easier than birth control? … As a father, I understand the importance of protecting the unborn.  As a Congressman, I will fight to protect life, not devalue it.”

U.S. Sen. Jacky Rosen (D-NV), who attended along with Sisolak, said the highest court’s decision will have “dire consequences” for people across the nation.

The senator warned that congressional Republicans will try to enact a nationwide abortion ban, overturning Nevada’s legal access to the medical procedure. She urged Nevadans to continue advocating, organizing and voting.

“We cannot stay silent,” she said.

Sisolak said he wanted to reassure anyone seeking reproductive health care that he “will not stand by and let this outdated idea that women can’t make the right decisions for their own bodies to take over our lives.”

Organizers said groups such as Planned Parenthood and Progessive Leadership Alliance of Nevada, among others, have a “week of action” planned next week to continue the fight.

This story was updated at 5:56 p.m. June 24, 2022, to include information from an afternoon press conference.