‘We’re staring off the edge of the cliff’: Artists, event professionals fear financial ruin amid pandemic 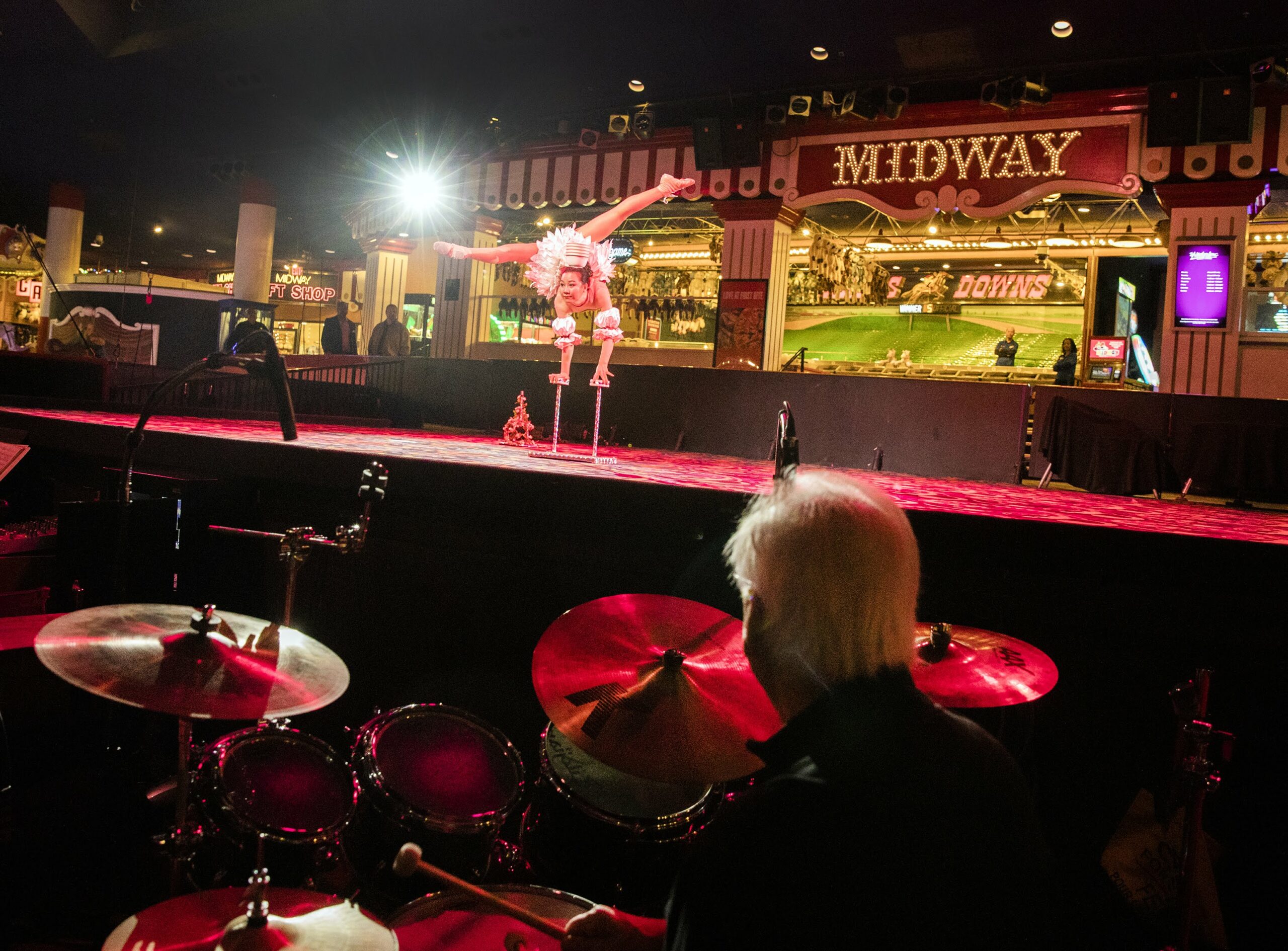 When her small business lost $35,000 in just three days amid recent large event cancellations in the Las Vegas area that ranged from Cirque du Soleil shows to Kelly Clarkson and Jonas Brothers residencies, Sarah O’Connell knew she wasn’t the only one suffering a jarring economic blow from the spread of COVID-19.

Now at the forefront of the public fight for financial relief, O’Connell sent a petition to Gov. Steve Sisolak and Mayor Carolyn Goodman last week on behalf of “thousands of production and cultural industry workers.” The petition had more than 9,600 signatures by Thursday afternoon.

“We are asking you to put a moratorium on evictions and enact a plan to forgive rent and mortgages for wage workers and local companies who will be unable to make the income needed to pay their bills until the outbreak is under control and business is able to recover,” she wrote in the petition.

Part of her request has come to pass. Several local jurisdictions — including justice courts in Las Vegas, Reno and Sparks — placed temporary suspensions on eviction proceedings in the past few days, and President Trump announced an order on Wednesday for the Department of Housing and Urban Development to suspend all evictions and foreclosures until the end of April.

O’Connell owns a small business dependent on the entertainment industry — a production lighting company called AxisLights. She’s also the creator of the arts and culture website Eat More Art Vegas, where she now posts resources for hurting artists and other industry workers.

The entertainment industry workers she advocates for include thousands of behind-the-scenes workers of both small-scale and major productions, events, conferences and live concerts, including audio, lighting, video, design, construction and talent companies, artists, actors and musicians, who are typically hired as independent contractors or freelancers.

Their incomes are generally dependent on individual projects, and they may not work a traditional full-time schedule, making them especially vulnerable to event cancellations.

O’Connell said industry workers are hit particularly hard by the timing of the pandemic — during a usually busy special events spring season in Las Vegas. She said workers expect to make the bulk of their annual incomes during this period and without it could lose their homes or health insurance.

O’Connell argues the number of workers in the industry is larger than the data suggests, because workers may own their own businesses that may not be categorized as “arts-related” but still rely on special events and productions.

According to a Las Vegas Global Economic Alliance 2018 report, the city’s special events industry generated $3.5 billion in 2017. The Las Vegas Convention and Visitors Authority (LVCVA) reported the 2019 spring season, from March to May, brought nearly 11 million visitors to the city.

O’Connell said industry workers should be protected by lawmakers because Las Vegas’s economy is dependent on them.

O’Connell isn’t impressed by the government’s proposed mitigation efforts of payroll tax holidays and paid sick leave for employees, saying the measures will not help thousands of people who work in Las Vegas’ entertainment industry.

“The mitigation proposals I was hearing, I thought, ‘Oh, it’s not going to touch us at all,’” she said. “And we are just going to be sitting here like the Okies in the Dust Bowl with no way to conduct anything.”

One of these measures includes entitling more workers to paid sick leave during the fallout of COVID-19.

A bill passed last June by the Legislature, SB312, approved mandatory paid time off for workers, although with broad exemptions, including allowing businesses with 50 or fewer employees to be exempt from the law.

A new bill introduced Friday and updated Monday by Democrats in the House of Representatives and the Senate was signed by President Trump on Wednesday. The Families First Coronavirus Response Act establishes a federal emergency paid leave benefits program for employees taking unpaid leave because of the COVID-19 outbreak.

Rep. Rosa DeLauro (D-Conn.) and Sen. Patty Murray (D-Wash.) unveiled the proposed legislation. DeLauro said low-income workers and their families could be hit harder by the economic ramifications of the virus spread, “as low wage jobs are at the forefront of not providing sick leave benefits.”

But O’Connell argues that the middle-class, freelance entertainment industry in Las Vegas will also bear the brunt of the financial hit in Nevada — and will not be eligible to receive benefits awarded to full-time employees of other companies and casinos.

Several unions representing these workers are individually and collectively asking Congress to include their members in federal relief packages.

“The bipartisan Families First Coronavirus Response Act is a good start to providing relief to workers, however, the provisions on the table for emergency paid leave benefits won’t apply to displaced entertainment workers because of the requirements for days worked on a job to qualify,” the union’s petition said.

Almost 40 congressional representatives sent a letter Thursday addressed to House Speaker Nancy Pelosi and Minority Leader Kevin McCarthy advocating for the same cause and specifying a way to compensate the workers.

“Due to the unique, sporadic nature of work in this industry, we believe that benefits provided to these workers should be calculated based on verifiable anticipated earnings for a current or future contract that has been cancelled, rather than prior wage history,” states the letter.

O’Connell said it was “disappointing” no Las Vegas delegation members signed the letter, an effort that was largely credited to Rep. Adam Schiff (D-Calif.).

In a letter Wednesday to Congress, Rep. Dina Titus requested protection for the travel and tourism industry, and specifically named "entertainment venue" and "cultural center" workers.

As for the proposals for temporary payroll tax cancellations and emergency federal relief, O’Connell worries those will “stop at the top,” with major casino corporations, land developers and real estate receiving the majority of the financial relief offered by the government.

She’s not the only one worried about major corporations receiving the majority of relief. The Trump administration’s plan to provide emergency assistance for targeted industries, like cruise lines, airlines and hotels, has been called a “bailout” that won’t reach smaller businesses who are also suffering in the crisis, and with less resources.

“We can turn this lemon into lemonade”

O’Connell worries the financial relief the government offers will result in budget cuts to the arts, which, she argues, is “actually the driving force of our industry, which is our creative capital and the sweat equity of our freelancing arts community.”

She’s reaching out to local and state lawmakers.

She plans to organize a community meeting where state representatives and local congressional members can be present along with unions who represent entertainment industry workers, like the IATSE and Culinary Union, along with workers and artists themselves to create clarity on questions about filing for unemployment and where to find resources.

This meeting is necessary, she said, for the community made up of many small business owners and independent contractors or freelancers because “they don’t have a [human resources] manager to explain it to them,” referring to instructions on protocol in light of a public health crisis.

She wants to make the case that the arts are a contributing success to the city and state’s economy, something she feels has been dismissed by elected officials and the LVCVA as a lucrative opportunity deserving of more investment.

“At this point, they could be getting more out of us if they worked with us instead of just scraping our cream off the top and partnered with us,” she said. “There’s a lot of investment they could do in the community that would vastly improve the quality of life across the valley and also make it easier for them to attract other investors.”

“We can turn this lemon into lemonade,” O’Connell said, referring to greater partnerships between artists and the business community.

Despite the proposed aid, O’Connell worries she and her husband will not be able to purchase a house they have already invested money in. She also worries she won’t have health insurance for her asthmatic teenage son in case he gets sick with the virus. And she worries about going from a “solid middle-class family owning a small business” to having to rely 100 percent on relief without income.

“Right now we’re staring off the edge of the cliff and we don’t actually know where the lifeline’s going to come from,” she said, saying her immediate and future concerns are “one in the same.”

She’s not alone — she doesn’t know anyone in her industry that “isn’t freaking out.”

As for now, O’Connell and other artists and small business owners are looking to charity organizations that may partner with unions who represent them or are filing for unemployment, besides calling on the local government for more support.

As required by Nevada law, a person seeking unemployment benefits must have earned at least minimum wage before becoming unemployed, be unemployed through no fault of their own (meaning they did not quit their job or were fired for “gross misconduct”) and must be able and available to work. A previous requirement to be actively seeking new employment has been waived by Gov. Sisolak in light of the COVID-19 crisis.

O’Connell also created a “corona response” Facebook group through her website, Eat More Art Vegas, as a way to help her community by posting announcements and information from relevant unions.

In response to worries about the mental health and well-being of workers who “don’t have something to look forward to,” O’Connell also created the “Not Today” festival to showcase artists’ and freelancers’ work who were put out of work during the COVID-19 crisis.

There is no scheduled date for the event yet, but she hopes the festival could foster a closer connection for the art community in Las Vegas and help them better prepare to “withstand anything like this again” together.