With wind in his sails, Buttigieg hoping to make electability case to Nevada’s voters of color 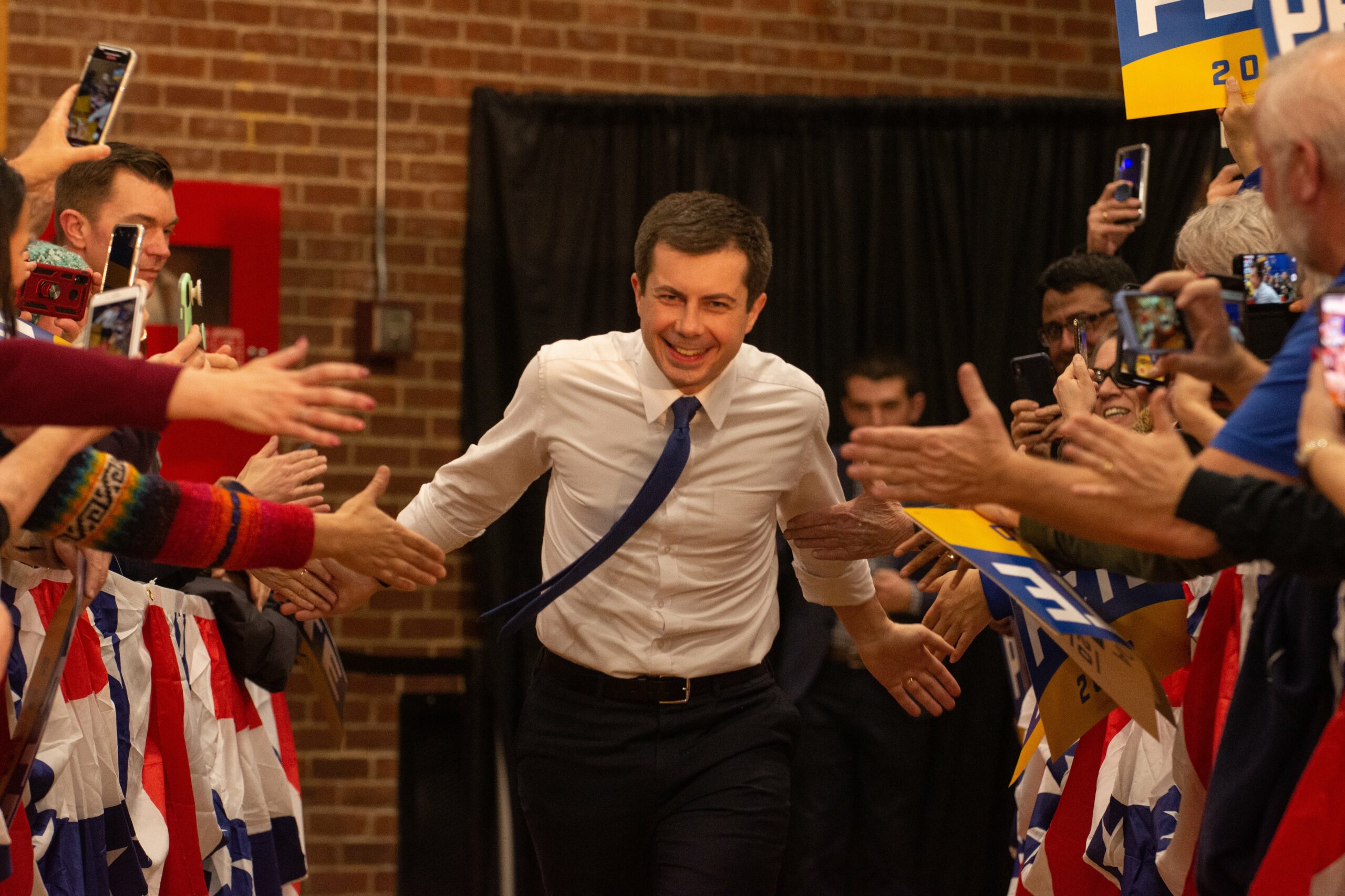 Former South Bend Mayor Pete Buttigieg, at a Black History Month brunch hosted by Nevada’s Black Legislative Caucus on Sunday, made his best pitch for how he would help black America as president.

In a booming voice over a speaker system, he touted that his so-called Frederick Douglass plan would empower black-owned businesses, invest in historically black colleges and universities, deliver health care equity by ensuring no discrimination against black patients, and reduce the country’s maternal mortality rate. It was the kind of moment in a candidate’s stump speech where he or she might earn a rousing burst of applause from the crowd — except it didn’t.

For 10 minutes, Buttigieg struggled to capture the full attention of the crowd of a couple hundred, many of whom spent the bulk of the address dishing up plates at the buffet, taking selfies and chatting in the back of the banquet hall at Eclipse Theaters in downtown Las Vegas.

“If every voice is heard, then this will become a country where we take the real steps that are necessary so that your race has no bearing on your health, or your wealth, your life expectancy or your experience with law enforcement in the United States of America,” he said over the din of the crowd and clinking of plates and glasses. “That is up to us, and we have an opportunity to do it right now.”

Certainly, it was poor timing — he took the stage right after attendees had been released to go get their food — but the moment also underscored the key hurdle that the former mayor has to overcome as he seeks victory here in the Silver State: courting voters of color.

It’s something that the mayor acknowledges. But he believes that his successes in Iowa and New Hampshire, where he came in first and second place, respectively, will prove to the Nevada’s voters of color that he has what it takes to secure the Democratic presidential nomination and win the presidency come November.

“The top priority I hear across the board, especially among voters of color, is making sure that we actually defeat Donald Trump,” Buttigieg said in an interview with The Nevada Independent. “I was able to gather some proof points in Iowa and New Hampshire for why ours is the campaign capable of doing that, and we'll continue sharing that message here too.”

He does, newly, have some help in conveying that message. Assemblywoman Sandra Jauregui, a young, Latina assemblywoman who endorsed Buttigieg last week, sung the mayor’s praises while introducing him at a rally at Rancho High School Sunday morning.

“His agenda not only supports women and Latinos but he understands the needs of marginalized communities and the barriers we face,” Jauregui told the crowd of about 1,100.

And at that event, Buttigieg made a direct appeal to Latino voters in a way that none of his opponents can. He told them that he’s for “an immigration system that actually matches our values as well as our laws, and we're for a future in this country where everybody belongs,” before switching to Spanish.

"Y a los soñadores que están aquí, les apoyamos y sabemos que este país es tu país también,” he said. (“And to the DREAMers who are here, we support you and we know that this is your country, too.”)

He was also endorsed by Kimberly Bailey-Tureaud and Charles Tureaud, the founders and publishers of Las Vegas Black Image magazine, this week.

Buttigieg, however, is still in the process of introducing himself to voters of colors in Nevada, while others, particularly former Vice President Joe Biden and Vermont Sen. Bernie Sanders, already have built those relationships.

Standing outside ahead of Buttigieg’s rally at Sparks High School Sunday evening, Linda Powell, 52, hadn’t yet decided who to support in the race. She said she likes Buttigieg “because he’s a brilliant person and reads a lot of books, and when you read a lot of books, you have a really great perspective in the world.”

But there’s one candidate she believes can appeal to a diverse group of people — Sanders.

“I really think Bernie is the one that can really pull that energy from all corners of all the people, types of people, working people, retired people, people with fixed incomes,” Powell said. “I just feel like Bernie is probably the best chance for pulling all of those elements in.”

When it comes to African American voters, Biden got a significant leg up in the race this week. Rep. Steven Horsford was one of two prominent African American elected officials from Nevada (the other was Las Vegas Councilman Cedric Crear) to endorse Biden this week, and, introducing the former vice president at the Black History Month brunch, vouched for his character.

“I know it because I saw him in action, side by side, as the vice president of our first black president of the United States, Barack Obama,” Horsford said. “We know Joe Biden. But more importantly, Joe Biden knows us.”

Other candidates have won varying levels of support from the black community. The owner of Eclipse Theaters, Nic Steele, has endorsed California billionaire Tom Steyer, as did Trina Jiles, a prominent black businesswoman who owns Gritz Café. Sanders has been endorsed by the Clark County Black Caucus. And Massachusetts Sen. Elizabeth Warren was endorsed by Assemblyman Howard Watts, a black assemblyman.

But there is one group that Buttigieg does appear to have significant support from in Nevada — moderates, and those he likes to refer to as “future former Republicans.”

Timothy Amundsen, 56, described himself and his wife as “lifelong Republicans” but said they were backing Buttigieg. His wife, Jenni Amundsen, said that the former mayor is “such the antithesis of Trump.”

Tyler Adams, 20, said that his mom, who supported Trump in 2016, is leaning toward Buttigieg.

“I think he’s winning over a lot of Republicans that are on the moderate side because he speaks well,” said Adams, who had voted early for Buttigieg earlier in the day.

And it’s a message that is resonating outside of Nevada, too. Tracey Sieber, 51, described herself and her husband as a “Republican Never Trumpers from Indiana.” The two ran into Buttigieg on their flight from Indiana to Las Vegas, and decided to take some time out of their vacation to see the former mayor in action.

“We know Trump's not our guy, so this might be our guy,” said Sieber, from Carmel, Indiana. “I have had my eye on him because I'm a frenzied Never Trumper — much more than my husband.”

The couple said that if Sanders is the nominee, they won’t vote for him. If it’s someone else moderate, such as Biden or Minnesota Sen. Amy Klobuchar, Sieber said it would be a “game-time decision.”

And that’s just where Buttigieg would like his campaign to be: Not just one of the moderate candidates, but the only moderate candidate that people feel they can support. He’s doing that by framing himself as a Washington, D.C. outsider who can bring “new voices” to the White House.

“I think, especially at a time like this one, there's such fatigue with the way of doing business in Washington,” Buttigieg told the Independent. “The perspective that I have — from the kind of community that's been left out of the conversation in the past, from working on the ground, no stranger to government, but doing it in executive way rather than rather than Capitol Hill — I think is the kind of preparation that a lot folks are looking to.”

He’s also hoping that his moderate appeal might win over one other group of Nevadans — members of the politically powerful Culinary Union. After much anticipation, the 60,000-member hotel workers union declined to endorse in the Democratic presidential race this week, largely leveling the playing field between the moderate candidates in the race who support the creation of a government public health insurance option over Medicare for all.

The Culinary Union has also taken aim at Sanders over his support for Medicare for all, which the union opposes because it would scrap their much-loved union health trust, in a flyer they are circulating. And Buttigieg, in the interview, was more than happy to pile on.

“What we need to do here now, it's really focused on the different visions that we have, especially with Senator Sanders, making the case for a health care plan that would take away the option of Culinary workers and others to have the health care plans that they fought for,” Buttigieg said. “And I think that's a debate we should have. It's a healthy one.”

As far as his chances in Nevada, Buttigieg is optimistic — despite the fact that the most recent poll has him hovering at just 10 percent, behind Sanders, Biden, Warren and Steyer. And he knows that the biggest barrier he faces is getting himself out there.

“We have a real wind at our back coming out of those first two contests. Of course, Nevada's a very different and unique state. So we're working to earn all the support that we can,” Buttigieg said. “It's a process both of cementing our vision and message for some and still introducing ourselves to others.”

Michelle Rindels and Luz Gray contributed to this report.