After starting early, strong in Nevada, Warren hopes for a comeback in the Silver State 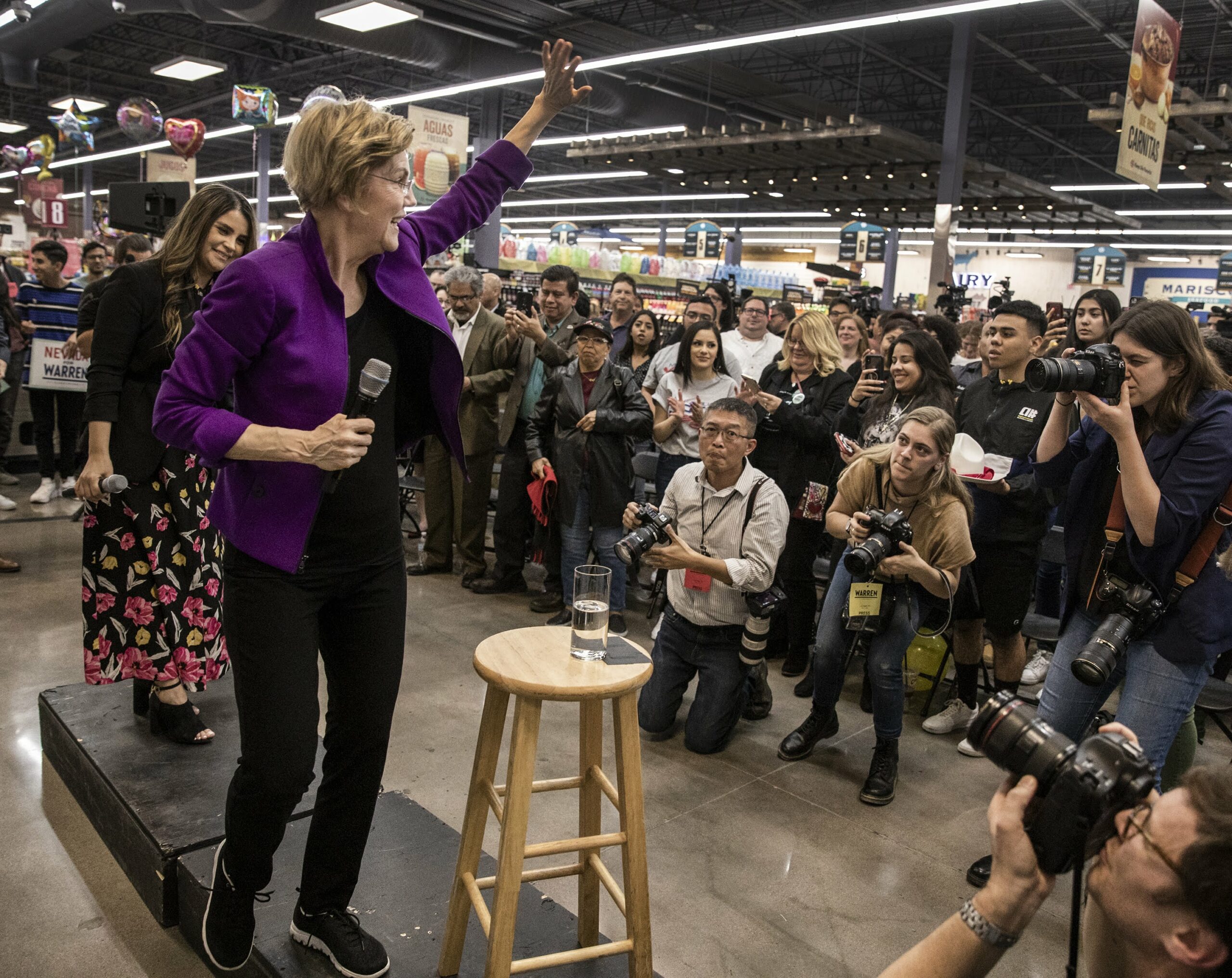 Massachusetts Sen. Elizabeth Warren, speaking to a crowd of several hundred at the College of Southern Nevada’s Henderson campus Monday afternoon, began with a disclaimer.

“You can tell, I’m a little husky,” she said, the audience sympathetically laughing as her voice cracked. “I’m shaking off a cold, and I’m trying to do my best to save my voice.”

Still, she soldiered on — both with the town hall and her packed day of events in Las Vegas, which also included stops by SEIU Local 1107 and Cardenas Market — and, in some ways, she had to. After poor showings in Iowa and New Hampshire, where she came in third and fourth respectively, the Massachusetts senator is banking on a win in Nevada to reinvigorate her campaign ahead of South Carolina’s primary next week and Super Tuesday at the beginning of March.

A victory in the Silver State isn’t out of reach, either. Warren was the first Democratic presidential hopeful to visit the state as a declared candidate — Monday marked one year since her first Las Vegas rally — and she had the earliest and one of the strongest campaign operations on the ground, though she has since been surpassed by Vermont Sen. Bernie Sanders, former South Bend Mayor Pete Buttigieg and former Vice President Joe Biden in staff size. She has about 50 staffers in the ground ahead of the caucus, compared to about 250 for Sanders, 130 for Biden and 100 for Buttigieg.

And where she was flagging in the polls ahead of the contests in Iowa and New Hampshire, two recent Nevada polls show her in second and third place.

She also started running an ad this week featuring both President Barack Obama and former Senate Democratic Leader Harry Reid touting her work spearheading the creation of the Consumer Financial Protection Bureau with the hope of boosting her profile in the Silver State.

“She had studied the financial world and had an insight into it that others didn’t have,” Reid says in the ad. “When she talks, people listen.”

If the Henderson town hall was any indication, she’s not giving up yet.

“So this question that comes to you, Nevada — what do you do when people are afraid when the danger is real? Do we back off? Do we cower? Do we get timid?” she continued, pausing briefly as she drew closer to the microphone.

“Or do we fight back?” she boomed, emphasizing each word in as loud a voice as her laryngitis would allow her to muster, to enthusiastic applause from the crowd. “Fighting back is an act of patriotism.”

And Warren supporters in Nevada don’t appear to be deterred by her middling performances Iowa and New Hampshire, where she captured 18 percent and 9.2 percent, respectively. The latter was a particularly significant blow to Warren’s campaign, given that she is from neighboring Massachusetts and expected to perform well in the Granite State.

But Kerstin Kramer, a 49-year-old educator from Reno, said that she’s not worried.

“I feel like the West is different than the East Coast and that was just the very beginning of caucusing and everything,” said Kramer, who attended Warren’s Reno rally with her husband on Sunday. “So as they said, 98 percent of the delegates are still available and so I feel like she still has a great chance.”

Lisa McAllister, an educator with the Rape Crisis Center, said Warren is “exactly where she should be.”

“I think she’s very well positioned. I think those early caucuses tend to be not reflective of the population as a whole so I’m very excited about where she is,” McAllister, 57, said at the SEIU 1107 event on Monday. “I think she’s in a prime spot. People are trying to write her off but there’s no way she’s ready to be written off.”

During the Henderson town hall, Warren continued to pitch herself as the unity candidate in the race. Her paid family leave policy, she told the crowd, was borrowed with permission from New York Sen. Kirsten Gillibrand, who dropped out of the Democratic presidential race in August.

“I gave her full credit for it ... and she said, ‘Let’s do it.’ Kamala Harris said the same thing. Same thing with Jay Inslee,” she said, referring to the California senator and Washington governor who both mounted presidential campaigns last year.

Another Democratic presidential hopeful, former Housing and Urban Development Secretary Julián Castro, has been actively campaigning for her in Nevada and other states. And Warren noted that her campaign staffers and volunteers hail from other Democratic campaigns that have ended.

“This is how we build a Democratic Party and a coalition that works for all of us,” Warren said. “It’s to bring in the good ideas, to respect the good ideas.”

It’s something that voters are picking up on here on the ground in Nevada. Her supporters like that she’s progressive — but also not so far to the left that they feel like she will alienate more moderate voters in the way they believe Vermont Sen. Bernie Sanders, with his call for a political revolution and democratic socialism, might.

“The main reason that I'm a Warren supporter is because I believe she brings a stronger message of unity than some of the other candidates in the field do,” Amanda Meyers, 31, said at Warren’s Henderson town hall on Monday.

“But we still like her progressive stances,” her mother, Kathy Montague, 55, chimed in.

Both women, who caucused for former Secretary of State Hillary Clinton in 2016, are leaning toward Minnesota Sen. Amy Klobuchar as their second choice, should Warren not meet the viability threshold in Nevada’s caucus.

Brett Hagerty, 34, caucused for Sanders four years ago but will be supporting Warren this time around. She said that Warren is a capitalist — which she believes “works better within the system” — and is concerned that Sanders will be framed as a socialist “boogeyman.”

“I just think she's got a more palatable message and she's specifically thought about how she wants to do each thing,” said Hagerty, who was attending the town hall with her daughter Margot, 1.

Sparks resident Melanie Pearce, 49, came to Warren’s rally at Reno High School on Sunday undecided. She said she doesn’t want an “extreme” candidate like Sanders, and grouped Warren in with the moderate candidates in the race.

“My thing is electability,” she said.

This is the lane Warren has steered herself into over the course of the race, somewhere between progressive and moderate. And it appears to have paid off in at least in one instance. The politically powerful Culinary Union has taken aim at Sanders over his Medicare-for-all plan, which they have said would “end” their existing union health care, but were gentler in their handling of Warren, who also supports the policy.

Warren, the union says, would merely “replace” Culinary health care after a three-year transition and “at end of collective bargaining agreements.” The Massachusetts senator has previously suggested that unions would come together around a table to “figure out how everybody gets fully compensated for what they have negotiated for” under her Medicare-for-all plan, which has a built-in transition period that, in the short term, includes the creation of a government-run public health insurance option.

“Then millions of people can try it. They can see what the health care is like,” Warren said, pitching her plan to SEIU Local 1107 members on Monday. “And then we vote on Medicare for all for everyone.”

Theresa King, an eligibility specialist at University Medical Center, called Warren’s Medicare-for-all plan a “great idea” but still said she wants more details about how it will work in practice.

“I think she has a plan to pay for it,” King said at SEIU. “Now, until you actually take the insurance, you won’t know how it works.”

Though Democrats head to the polls for a final day of early voting on Tuesday, it’s still hard to write anybody off at this point — especially when so many Nevada voters are still making up their minds.

Mahen Ranasinghe, 74, wasn’t planning on showing up to Warren’s Henderson rally on Monday, but he got an invitation from her campaign by text and figured, “Why not?”  Ranasinghe, a retired engineer, said that this will be the first election that he will participate in since moving to the United States in 2012, but he’s still deciding between three candidates.

“Sanders is very outspoken, and he seems to be honest in what he says, and Biden has the experience having been the vice president, and Warren also has experience and is fairly outspoken and I've listened to all three of them,” Ranasinghe said. “The others, I'm not that impressed. I haven't bothered much about them.”

Jackie Valley and Michelle Rindels contributed to this report.