Are there microchips in vaccines? Is Fauci Satan? 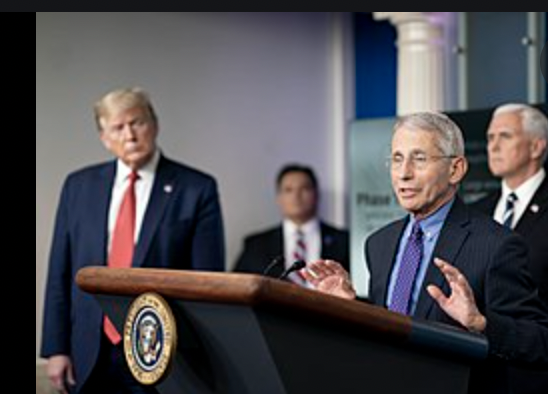 I have not heard of this site.

Does it have info on the microchips in the vaccines and a story proving Fauci is Satan? https://t.co/Fz0EOQhHCO

Yes, our poor, despondent, beleaguered editor-in-chief was being facetious. Contrary to what one opinion columnist for the Washington Post might think, mockery and insults are indeed the correct answer when you find yourself arguing with people who would rather trust the ghost of Lyndon LaRouche than live in reality. You can’t reason someone out of something they weren’t reasoned into in the first place, so talking someone out of believing the chief medical advisor to the president is Satan is out of the question — where do you even start? You also can’t just let them stew quietly in ignorance and fear — these people are protesting outside of cancer treatment centers and attacking patients for wearing masks.

Do you think the latest Q drop includes an instruction to stop insulting Biden voters and their concerns? Do you think the Proud Boys are telling their members to talk to Bulwark readers and reason them out of being “Never Trump”?

In Nevada, Trump voters are storming their own political party, then claiming it’s just like January 6th because the police were called, not because these people routinely forget the First Amendment grants the right of the people to peaceably assemble. Meanwhile, rural county commissions are prohibiting vaccine passports because heaven and government forbid private property owners restrict access to their property against people who refuse to take personal responsibility for their own health. Consequently, it now costs less political capital to require everyone to wear a mask once they leave their home, regardless of their vaccination status, than it does to simply empower those of us who have vaccines to freely live our lives while market forces compel the most of the unvaccinated to take responsibility for their choices.

I’m sure your medical insurance provider knows how much a COVID-19 hospitalization costs. I bet they have actuarial tables comparing hospitalization rates for vaccinated and unvaccinated individuals, too. I wonder how quickly people would get vaccinated if they learned their premium would consume their entire paycheck — or, in the case of Medicare beneficiaries, their Social Security checks — to cover the difference in liability? Or perhaps employers should be able to preferentially hire the vaccinated and lay off the unvaccinated to maximize labor productivity? Avoidable hospitalizations lead to a lot of sick time, after all. If employers could do that, of course, our unemployment system could then require vaccinations to collect unemployment benefits — there’s no reason people should choose to remain wilfully unemployable, nor any reason the state should subsidize such foolishness.

But no, we’re not going to do any of that. Instead, we’re going to force employees to wear masks while they’re on the clock so bureaucrats in Los Angeles, Chicago and Hawaii know we’re being super cereal about the pandemic.

So fine, let’s talk about microchips in our vaccines and the embodiment of angelic evil that is Dr. Anthony Fauci. Just make sure you wear a mask while you read this column at work.

Are there microchips in vaccines?

For some of us, that’s perhaps a shame. In a recent YouGov poll, nine percent of vaccinated Americans claimed they believe the U.S. government is using the COVID-19 vaccine to microchip the population, which implies they either received the vaccine despite the microchips or perhaps received the vaccine because of them (or, alternatively, lied — but what kind of person would go on the internet and tell lies?).

Wanting to be microchipped might sound a little crazy, but let’s not forget it was only two years ago when I wrote about now-former Assemblyman Skip Daly’s seemingly quixotic quest to ban human microchipping in Nevada. His bill passed, but only after it was amended to forbid involuntary microchipping — which means, per NRS 200.870, microchipping a Nevadan without their consent, via COVID-19 vaccine or anything else, has been a class C felony since June 3, 2019.

The reason the bill was amended to forbid involuntary microchipping, instead of categorically banning microchipping entirely, is because a small, eccentric minority of Nevadans not only want to be microchipped, but already are. This raises an interesting point — it is possible to microchip people. So, other than the possibility of feloniously violating state law, why aren’t we using vaccines to do it?

To answer that question, we need to understand the problem.

To start with, microchips are small, but they’re not that small — the smallest implantable microchip ever created, as of a few months ago, was still about the size of a single grain of table salt, which means it was still visible to the naked eye. Consequently, a vial full of such microchips would appear noticeably cloudy, as if it had several specks of dust in it, or would appear to have some sort of precipitate in the bottom of the vial.

The good news, if you’re a conspiracy theorist, is COVID-19 vaccine needles are indeed probably large enough to inject said microchips. According to the CDC, vaccines are delivered using 22-25 gauge needles, which means each needle has an internal diameter between 0.26-0.413 millimeters. Since the world’s smallest implantable microchip is less than 0.1 millimeters in size, an individual microchip would comfortably fit within a COVID-19 vaccine needle, though if the concentration of microchips was too great, it would only take two or three of them to clump together to clog the vaccine needle.

The bad news, if you’re a conspiracy theorist, is these particular microchips don’t do much. For starters, they require power (they’re too small to carry batteries). Additionally, they can’t broadcast anything (they’re too small to carry radios). To work around those limitations, researchers designed the chips to communicate and power themselves using ultrasound waves. Consequently, if you’re a conspiracy theorist who sincerely believes you’ve been microchipped, your best bet is to just avoid obstetricians, urologists, or any other medical specialists who use ultrasound equipment for diagnostic purposes, lest they read the medical information collected by the chips — information which they can much more easily receive merely by putting a thermometer in your ear or a pressure cuff on your arm.

There are microchips which broadcast low power radio frequencies, of course, as any pet owner can confirm. They’re just not small enough to fit through a COVID-19 vaccine needle. According to PetMD, pet microchips are implanted using 12-15 gauge needles, which are at least three times wider than any vaccine needle. Additionally, pet microchips aren’t delivered in a multi-use vial and sucked out before implantation. Instead, each chip is delivered with each needle during manufacture. The reason for this is obvious — if you’re going to shoot a living creature with a 12-15 gauge needle, they would greatly appreciate it if you only injected them once rather than accidentally injecting them full of microchip-free solution over and over again.

This brings up a final point — tiny microchips represent the cutting edge of technology and technology’s cutting edges tend to be expensive. When you’re spending enough money to deliver that technology into millions of Americans, you want to know what you’re getting. As James Heathers pointed out in The Atlantic, small needles filled from multi-use vials injected into muscle tissue is the absolute opposite of what you would want if you wanted to confirm every vaccinated American would receive a fixed number of government-issued microchips. Some might get one or two, if any, and some would get too many. Besides, COVID-19 vaccines are injected into muscle tissue, not the surface of the skin — even pet microchips are useless if embedded that deeply.

I wonder if anyone’s selling face masks with dazzle camouflage?

This question is not even wrong.

The fundamental difficulty with this question is there is only one provable portion — namely, the existence of Dr. Anthony Fauci. I think we have enough clearly repeatable video evidence for us to conclude that, yes, Dr. Fauci exists, or, at least, exists as much as anyone can be said to exist.

Proving Dr. Fauci is Satan, on the other hand, would require us to prove Satan’s existence, which is, I regret to inform you, a little beyond the scope of The Nevada Independent and this particular op-ed columnist. As much fun as it might be to read this particular atheist’s summary of Wikipedia’s article on Satan (apparently “satan” is a Hebrew noun meaning “accuser” or “adversary” — I suppose Dr. Fauci is an adversary to some people, so Q.E.D.), it’s probably for the best if we leave such theological musings to the actual theologians, or at least to someone who attended church or read the Bible in the past twenty years.

In other words, I don’t know what God needs with a starship and I don’t know what Satan would need with the chief medical advisor to the president, but I’m probably not the person you should be asking anyway. Perhaps I’m Satan. Stranger things have certainly happened.

One thing that isn’t strange, however, is people calling other people Satan. As Smithsonian Magazine pointed out a few years ago, Ben Carson implied Hillary Clinton was in league with Satan and former Speaker of the House John Boehner referred to Republican Senator Ted Cruz as “Lucifer in the flesh” (if we apply the transitive property, Ben Carson therefore implied Hillary Clinton was in league with Ted Cruz, which makes no sense since Ted Cruz is actually in league with Alexandria Ocasio-Cortez) — and that was just in 2016.

Go a few decades further back through our nation’s history and there’s the Satanic Panic, which centered around Dungeons & Dragons for whatever reason (Disclaimer: My parents played a lot of D&D when I was young, so I was dragged to a lot of their roleplaying sessions — this sounds much more salacious and interesting than it actually was). Rewind even further and you’ll find the Salem Witch Trials, which all started with a forced interrogation of a Native American slave.

Yes, the Pilgrims had slaves. How do you think they found the time to accuse each other of witchcraft and steal each other’s land in the first place?

Lest you think the Pilgrims pioneered accusing people they don’t like of being in league with Satan, I’ll remind you that, even before the first non-Viking European settler arrived in North America, Dante’s Divine Comedy infamously placed several Florentine officials and Pope Boniface VIII within the various levels of Hell. The Divine Comedy, in turn, was preceded a few centuries prior by Chaucer’s The Friar’s Tale, which describes a cynical argument between two powerful and supposedly holy men.

Point being, calling people you don’t like Satan is a tradition which dates back to at least the 13th century, if not substantially earlier. Granted, it carried more weight when everyone listening to such insults collectively believed in the actual existence of Satan, but it’s neither new nor original. It is, in fact, a depressingly old and common insult.

Is Dr. Fauci Satan? Perhaps, perhaps not, but one thing is certain — his detractors are breaking very old ground by claiming he might be.

David Colborne was active in the Libertarian Party for two decades. During that time, he blogged intermittently on his personal blog, ran for office twice as a Libertarian candidate, and served on the Executive Committee for his state and county Libertarian Party chapters. He is now an IT manager, a registered non-partisan voter, and the father of two sons. You can follow him on Twitter @DavidColborne or email him at [email protected].