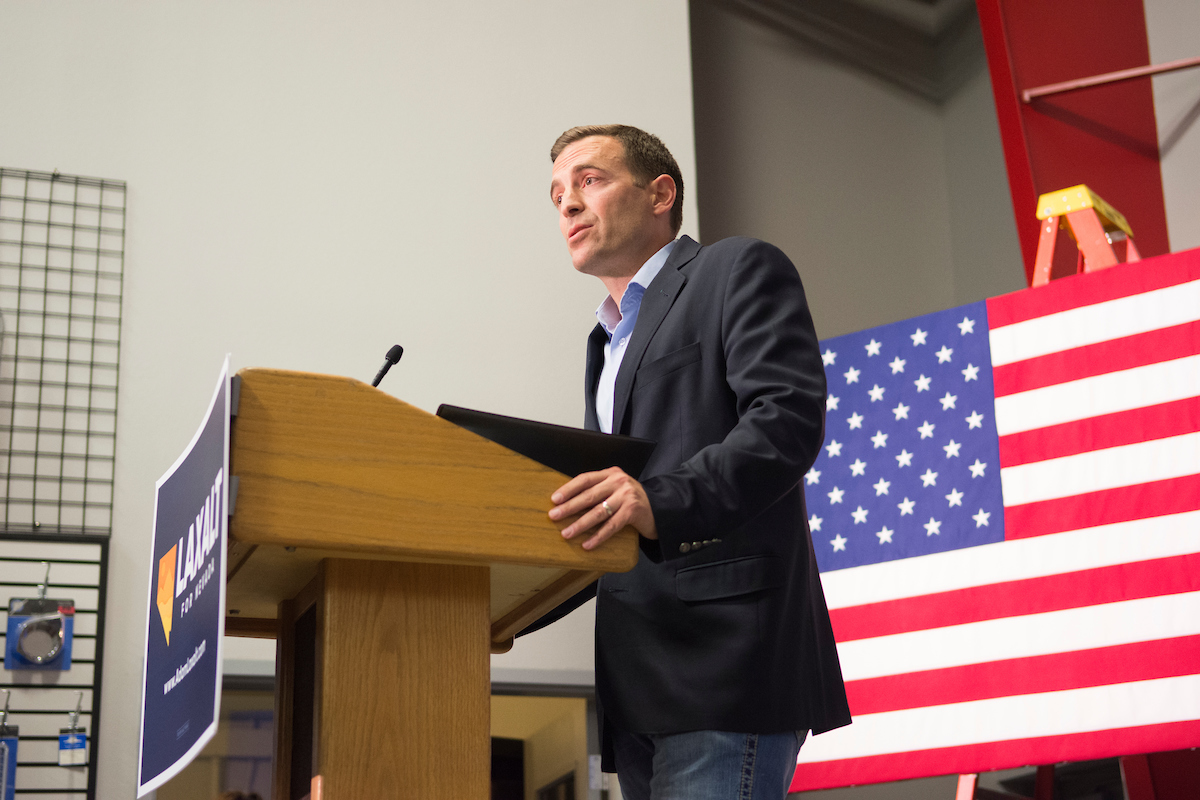 Republican gubernatorial candidate Adam Laxalt argues that he has the tools to extract funding for the controversial Education Savings Accounts program from a Democratic-controlled Legislature because he was able to get bipartisan support for dealing with elder fraud and a backlog of untested rape kits.

Laxalt’s comments came during a forum on school choice Tuesday night at the East Las Vegas Community Center that also included Republican lieutenant governor candidate Michael Roberson and congressional candidates Danny Tarkanian and Cresent Hardy (The Nevada Independent was barred from attending, but obtained a recording of the event from a member of the audience). The attorney general cited his work on bills related to rape kit backlogs and guardianship as examples of how he could bring both sides to the table and achieve compromise.

“I needed to go to Republicans and Democrats — Democratic majority — and get signoff to move forward with these programs. We got unanimous support for that program,” he said. “We’ve been very successful at that in the AG’s office and I hope to be very successful with that if I'm elected governor.”

But protecting seniors from scammers and preventing a backlog of rape kits — two issues on which there is no organized opposition, and the former of which is facilitated in large part by federal grant money — are likely to be far easier fights than the one waiting him over ESAs should he be elected governor. Republicans in the minority last session were unable to secure funding for ESAs, which allow parents to redirect the per-pupil state school funding allotment for their child to private school tuition or other education expenses, in spite of vowing not to support a budget and having a popular Republican governor on their side.

In the 2019 session, Democrats — who have been almost unanimous against ESAs — are expected to hold their majorities easily and could potentially have veto-proof majorities if they win key seats. That would further reduce a Republican governor’s leverage.

Republicans and Democrats ultimately agreed to a compromise in 2017 that included $20 million in one-time additional funding for Opportunity Scholarships, a tax credit-funded scholarship program that provides a limited number of low- and middle-income students with thousands of dollars each year to pay for private school tuition. No funding was allocated to ESAs, which have no limitations based on family income, and only one Democrat publicly supported the concept.

“We tried it last session and we were not entirely successful although ... we tripled Opportunity Scholarships and I don't want to gloss over that because the conversation is always about ESAs,” Roberson said, pointing to the fact that no Democrats supported Opportunity Scholarship legislation in 2015 but numerous Democrats voted for the compromise that involved the scholarships in 2017.

A poll commissioned by The Nevada Independent in April found that 49 percent of Nevadans favor the ESA program, while 38 percent opposed it and another 13 percent either didn’t know or didn’t answer the question.

“I think elected officials in both parties are starting to wake up to this groundswell of support in our communities for school choice,” Roberson said, adding the Democratic Assembly Speaker Jason Frierson and Senate Majority Leader Aaron Ford acknowledged in a private meeting that the scholarships were a success. “I was gratified to hear both of them admit in the governor's office, in front of all of us, that they were wrong about Opportunity Scholarships. That they had seen Opportunity Scholarships working for families in their communities, and they said it was much to their chagrin because they wanted to see the Opportunity Scholarships fail but they couldn't ignore the evidence.”

"At the end of last session, Senator Roberson cared more about vouchers than he did about our state's budget. He rejected any offers of compromise, even in the last hours of session. Rather than find common ground, he refused to support the entire state budget unless we moved revenue from marijuana sales to fund ESAs,” they wrote. “Despite his refusal to be a statesman, the rest of us in a bipartisan effort reached a compromise after the budget was approved that included a one-time allocation of additional money for Opportunity Scholarships. No one wanted Opportunity Scholarships to fail and ending it was never even proposed.”

Critics say that the ESA program will divert scarce dollars from public schools, and have raised concerns that ESAs are available even to wealthy families who can afford private school tuition. Opponents also see ESAs as part of a broader movement to undermine the public education system to the benefit of private, for-profit operators that are not obligated to serve every student.

“In my opinion, until we fund public education the way that we should to be able to make a true assessment, we are doing a disservice to the greater masses by taking money away and sending it to private school, and certainly in a way that lacks accountability, lacks any conversation about need,” Democratic Assembly Speaker Jason Frierson told The Nevada Independent in May.

Roberson pushed back against criticisms, saying schools that lose students through ESAs would have fewer students to serve and less crowded classrooms, although he acknowledged that “we need to hire more teachers.” As for capital costs, he noted that the 2015 Legislature he helped lead approved a $4 billion bond rollover to support school construction.

Roberson sounded an optimistic note about the ESA program and sold Laxalt as the only hope for the issue to come up for discussion, and to prevent the Opportunity Scholarship funds from drying up and “kids basically being thrown out of schools because they won't have the funding they had today.”

“I’m confident if we can get a Republican governor and pick up some more school choice legislators next session, we can also get funding for ESAs,” Roberson said. “But that will not happen if Mr. Laxalt’s opponent becomes governor. It simply will not.”

Laxalt’s Democratic opponent, Steve Sisolak, says on his website that he will “fight against the diversion of funding from public schools into private schools.”

Laxalt noted that his office, with the help of a renowned outside lawyer, defended the ESA program in court. The Nevada Supreme Court determined that the concept of ESAs passed constitutional muster on the point of separation of church and state, but the funding mechanism did not.

His office has also been quietly involved in a variety of other states’ fights over public funding for religious schools. He signed an amicus brief to the Supreme Court in 2015 defending a Colorado voucher program, and led an amicus brief that same year siding with a Lutheran preschool in Missouri that sought state grant funding for its playground.

“I hope that what happened with Opportunity Scholarships, where finally both sides came together and understood that this kind of school choice helped the kids that most needed it,” Laxalt said. “We need to have that same conversation over ESAs and i hope we can have it.

We have to be willing to put some pressure on and say we won’t accept not moving forward because this is an important innovation that will help kids from all walks of life.”

The forum also showcased some tension between Roberson and Tarkanian, who faced each other in a bitter congressional primary in 2016. Tarkanian, after hammering Roberson over his support of the Commerce Tax in 2015, won. He then went on to lose a close race to Rep. Jacky Rosen.

At the forum, Tarkanian said two of his children fell behind grade level in English and math in their public school, and he blames it on too many children speaking Spanish in the classroom and teachers taking time to have material translated back and forth.

“I don't see how you can stay up with the world standards … if we are teaching kids that they're not all uniformly speaking the same language in the classroom and obviously that language has to be English,” he said. “I think that's the biggest problem facing our communities right now.”

Tarkanian took aim at Zoom Schools, a program in which schools with high percentages of English language learned are given extra money that can be used for an extended school day, a longer school year, or other interventions aimed at helping English language learners catch up. He criticized schools for not separating students to “teach them English so that they can come into the classrooms and perform at a high level.”

“What they do is they try to give more money to those programs that have more hours in the day, they have higher technology ... but $200 million, and $100 million from the tax increase that was passed in 2014, went to the Zoom Schools instead of going to the teachers, instead of going into the classroom,” he said. “Instead of making all the other kids better students too, we're trying to throw more money in a way that I just think is very difficult to excel in.”

Roberson defended the program, which he helped expand in 2015. And he also defended a move that has been a political liability for him in primaries and is opposed by the governor candidate he supports — leading the charge to pass a $1.1 billion tax package backed by Gov. Brian Sandoval.