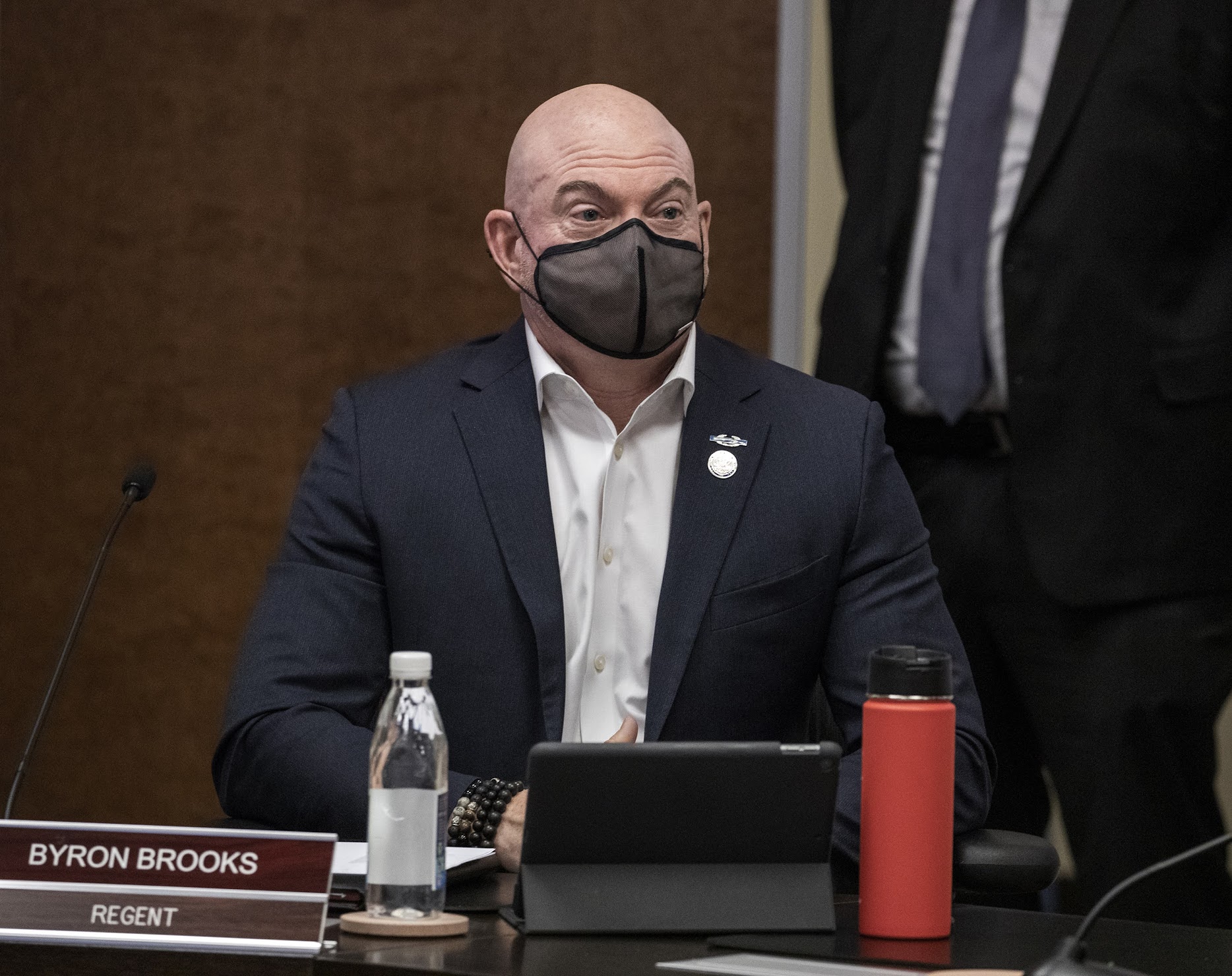 Nevada System of Higher Education Chancellor Melody Rose accused Regent Byron Brooks of attempting to intimidate her during a private legal briefing in December while Brooks was carrying a firearm on his person — the latest serious rift between members of the higher education system’s governing board and its top administrative executive.

In a letter sent to regents on Feb. 3 from attorney Daniel Polsenberg of the firm Lewis Roca and obtained by The Nevada Independent, Brooks allegedly carried a firearm into a closed-door meeting between regents, the chancellor, two members of the NSHE legal team and lawyers conducting the investigation into Rose’s ongoing hostile workplace complaint.

A spokesman for the chancellor and the Nevada System of Higher Education (NSHE) did not respond to a request for comment on Friday.

Polsenberg also did not respond, though Lewis Roca attorney Jennifer Hostetler sent a statement on behalf of Rose.

“Chancellor Rose is dedicated to doing the job she was hired to do and to making Nevada's higher education system a place where students and faculty alike feel safe, supported, and are given a fair shot at success,” Hostetler said. “She is committed to taking the steps necessary to ensure those goals are met.”

In a statement sent via email Friday, Brooks said that “it is unfortunate and concerning to me that anyone in the systems office, particularly while attending a Regent meeting, would feel unsafe.”

According to the letter, Brooks — who was elected to the board in 2020 —  requested permission to carry a firearm onto NSHE property under system bylaws on Aug. 24, and eventually received conditional approval from then-Board Chair Cathy McAdoo on Sept. 29.

State law prohibits the possession of weapons, including guns, on NSHE campuses and administrative buildings. However, the board’s code allows for written exemptions to be granted either by institutional presidents or by the chancellor if the request is for a “system location.” It’s unclear why the exemption in Brooks’ case was issued by McAdoo and not by Rose , and McAdoo did not respond to requests for comment.

In his statement, Brooks said he had requested the exemption after receiving “increased threat assessment protocols” by university police command in Southern Nevada in August. Though Brooks did not specify the reason for the increased threat assessment, regents were in the midst of intense public scrutiny over the possible enactment of a COVID vaccine mandate for Nevada college students at the time.

“After discussion with multiple NSHE decision makers and complying with background check and interview protocols, I was granted approval to carry my firearm until a time when external security threats were alleviated,” Brooks said.

The letter alleges that the chancellor learned Brooks had decided to carry his firearm into the NSHE building for the first time just before the meeting began, something that left her “very uneasy” because Brooks, the letter said, had “spoken to her in an antagonistic and verbally intimidating manner” on more than one occasion.

The chancellor’s letter then asks regents to rescind Brooks’ authorization to carry a firearm on system property “immediately” and no later than Feb. 10. Failing that, the letter said, the chancellor will “pursue all legal and equitable remedies available to her.”

“To this day … no steps have been taken and the Chancellor remains concerned for her personal safety while at work, knowing Regent Brooks, who has been openly hostile to her, remains free to carry a weapon onto NSHE property,” the memo said.

The matter may now be moot, though. Brooks said that following “additional safety protocols” from university police, he no longer feels a need to carry a firearm into NSHE administrative offices and that he will no longer carry during meetings.

The letter described Brooks’ conduct “unnecessarily aggressive” and “appeared designed to verbally and/or physically intimidate” her, stating that Rose left the meeting “shaken, scared and concerned for her personal safety.”

The letter adds that a written report was later submitted by the chancellor to the lawyers investigating her original workplace complaint.

Multiple sources confirmed to The Nevada Independent that a report on the investigation into the chancellor’s complaint was distributed to regents late Friday morning, with a closed-door meeting to discuss the findings set for next week. The report has not been made public, and it is unknown what conclusions investigators reached.

Though he did not comment on the substance of the report, Brooks did call the chancellor’s accusations regarding the Dec. 30 meeting “unwarranted,” adding that “I will allow the official investigative report to speak for itself.”

The Board of Regents has been embroiled for months in a series of controversies, delays or high-profile decisions.

Brooks was also under fire this week from the political left, as the Progressive Leadership Alliance of Nevada (PLAN) criticized him in part for his original petition to carry a firearm on NSHE property.

In taking aim at Brooks, PLAN also criticized remarks from another regent, Patrick Boylan, as racist.

He ended his remarks with: “Who will stand up for the ‘colorless’ students?”

PLAN began circulating a petition calling on regents Boylan and Brooks to resign on Thursday. According to Laura Martin, the group’s executive director, 160 individuals signed the petition in the first 24 hours.