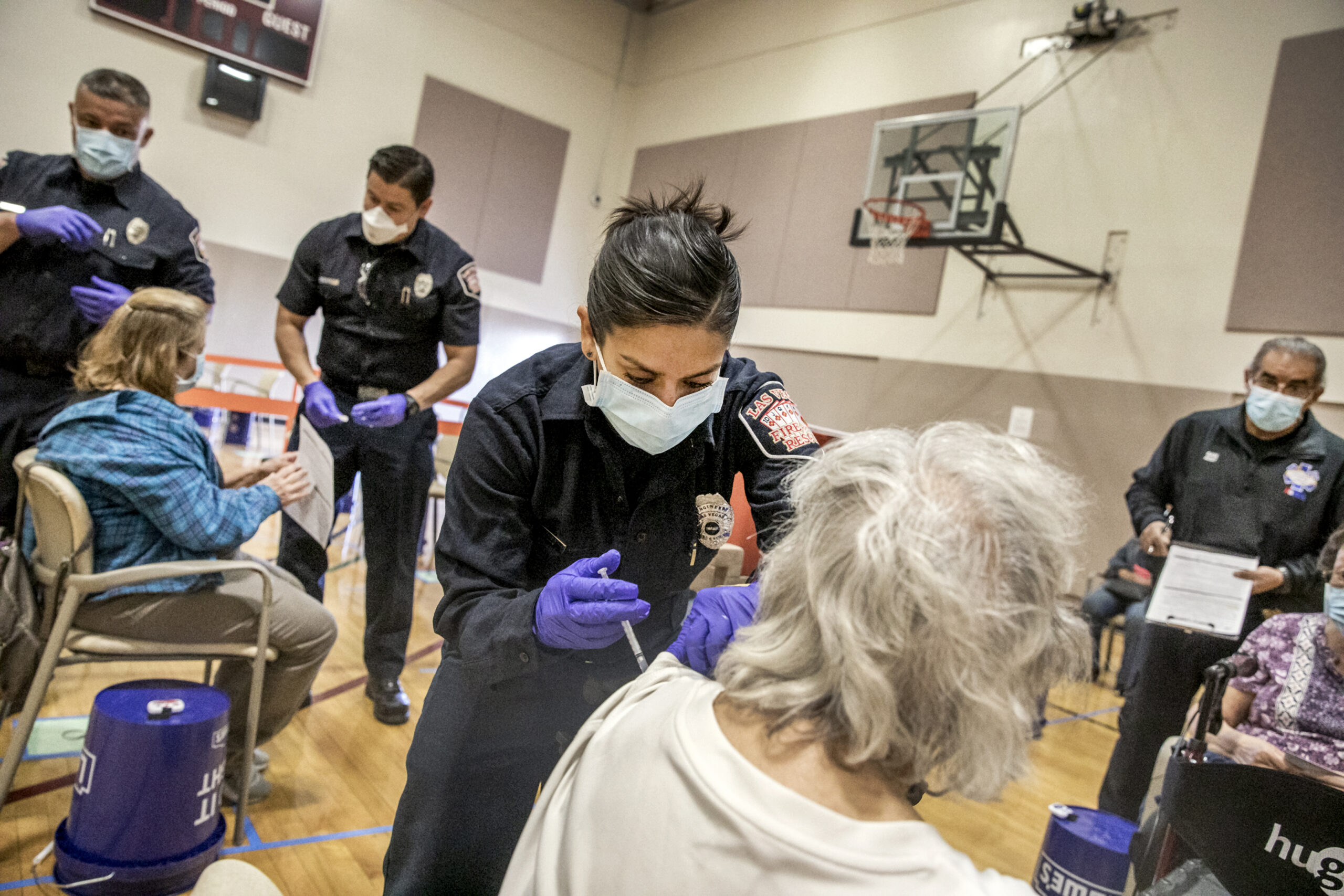 Welcome to the 40th installment of “Coronavirus Contextualized,” a recurring feature in which we explore some of the numbers swirling around in the time of coronavirus.

Below, we take a look at the latest COVID-19 trends as the number of new reported cases each day continues to decrease and as capacity restrictions on certain businesses started lifting this week.

The number of new COVID-19 cases reported in Nevada continues to decline.

As of Thursday, an average of 492 cases were reported each day over the last seven days, down from 677 last week. At the peak of the surge this fall, the seven-day average was 2,736, on Dec. 10; the low point before cases started to increase in mid-September was 267.

State biostatistician Kyra Morgan, at a meeting of the state COVID-19 Mitigation and Management Task Force on Thursday, projected the state would hit a low of somewhere between 315 and 320 cases, similar to what was experienced at the end of the summer wave of cases, by the end of the month. However, she noted that at the last low point, in September, the state only saw those numbers stay low for about a two week period.

“When we rebounded from our summer wave, we really just had a very small period, a very short period of what I might call a sustained baseline before we started to see cases increase again and so just want everyone to exercise caution and continue to preface all of this progress with just the idea that we need to continue to be diligent,” Morgan said.  “If we see those numbers reach that baseline around March, just need to be really cautious that we're looking and making sure that we don't see subsequent increases that are significant just shortly thereafter.”

Since the beginning of the pandemic in March, there have been 289,975 COVID-19 cases reported statewide. About 9 percent of those cases, 27,035, have been diagnosed in the last month, and a little less than 1 percent, or 3,442 cases, have been reported in the last week.

One in 11 Nevadans has tested positive for the virus since the beginning of the pandemic. Nevada ranks 16th in the nation for COVID-19 cases per capita, the same as last week.

Nevada’s test positivity rate — which looks at the percentage of tests or people coming back positive out of the total tested — also continues to decline.

Starting with the number of new reported people who tested positive for COVID-19 out of the total number of new reported people tested each day, the state’s seven-day average test positivity rate was about 16.7 percent as of Thursday, down from a high of 45.9 percent on Dec. 13 but still significantly higher than the recent low point before the surge this fall, 9.2 percent on Sept. 17.

It is not possible to independently calculate the test positivity rate based on test encounters because the state only reports the number of positive cases, not the number of positive test encounters. However, the state does provide this number, calculated as an average over a 14-day period with a seven-day lag. As of Wednesday, that number was 11.3 percent, down from a high of 21.7 percent on Jan. 13. In September, before cases started to increase, the test positivity rate was 6.1 percent — meaning that test positivity is still nearly double what it once was.

Whichever method you use, the trend is still the same: Statewide test positivity continues to be on the decline.

Since the beginning of the pandemic, about 1.4 million people — about one in 2.2 Nevadans — have been tested for COVID-19, and there have been more than 2.6 million individual testing encounters.

Since vaccinations started in December, 466,981 doses of the COVID-19 vaccine have been administered in Nevada, according to the Centers for Disease Control and Prevention. That includes 346,585 first doses and 118,192 second doses.

That means that one in nine Nevadans has either been fully or partially vaccinated. In total, Nevada has been distributed 593,275 doses of the vaccine by the federal government.

It’s important to note that these numbers are a rough approximation, as shots are reported based on the county where they were administered, not where the person they were given to lives.

The number of new COVID-19 deaths being reported each day is decreasing, though they remain at a still-high level.

Pershing County still has the highest number of deaths per capita in Nevada, with 30 deaths per 10,000 residents, followed by Carson City, Churchill County and Nye County, each at 20.

Nevada ranks 21st in the nation for deaths per capita, the same as last week.

There were 698 people hospitalized with COVID-19 as of Wednesday, the last day for which data is available, down from 879 last week. The record, 2,025 hospitalizations, was set on Dec. 13. The low point in September was 417.

Nevada still has the sixth highest number of people hospitalized with COVID-19 per capita at 24.5 per 100,000, behind New York, Georgia, Arizona, New Jersey and Texas.

Nevada hospitals are currently staffing 7,013 beds, more than the 6,660 they are normally licensed to operate, to keep up with the demand. As of Wednesday, 73 percent of staffed hospital beds and 63 percent of ICU beds were occupied. Those numbers were 77 percent and 68 percent, respectively, in Southern Nevada and 69 percent and 48 percent in Northern Nevada.

Eight of the state’s 17 counties are considered at elevated risk for the spread of COVID-19 according to state criteria as of Thursday. Those counties are Clark, Elko, Eureka, Lincoln, Mineral, Nye, Pershing and Washoe.

There is, however, some talk of the COVID-19 Mitigation and Management Task Force changing these metrics as the vaccination campaign continues and in light of the fact that COVID-19 may become endemic, essentially permanent, like the flu or the common cold.

Morgan, the state biostatistician, noted that the case rate threshold is at 200 but Nevada hasn’t achieved 200 cases a day since the state’s stay-at-home order in March.

“When we look at the criteria for elevated disease transmission, we need to give ourselves the flexibility to understand what a reasonable baseline is and we've learned a lot now compared to what we knew when we came up with that criteria,” Morgan said. “I do think we need to just have a fluid conversation around what is a realistic benchline, so that we're setting goals that are achievable — and still work to keep infrastructure and things like that under control — but so that we just aren’t consistently flagging everyone for a goal that's essentially not ever going to be maintained.”

Mineral County continues to have the highest case rate in the state at 1,491 cases per 100,000 residents in the last 30 days. Clark County comes in second at 811 and Pershing County comes in third at 575.

Update 2/25/20: This article has been corrected to omit a missing word. Pershing County has the highest death rate per capita of any county in Nevada.