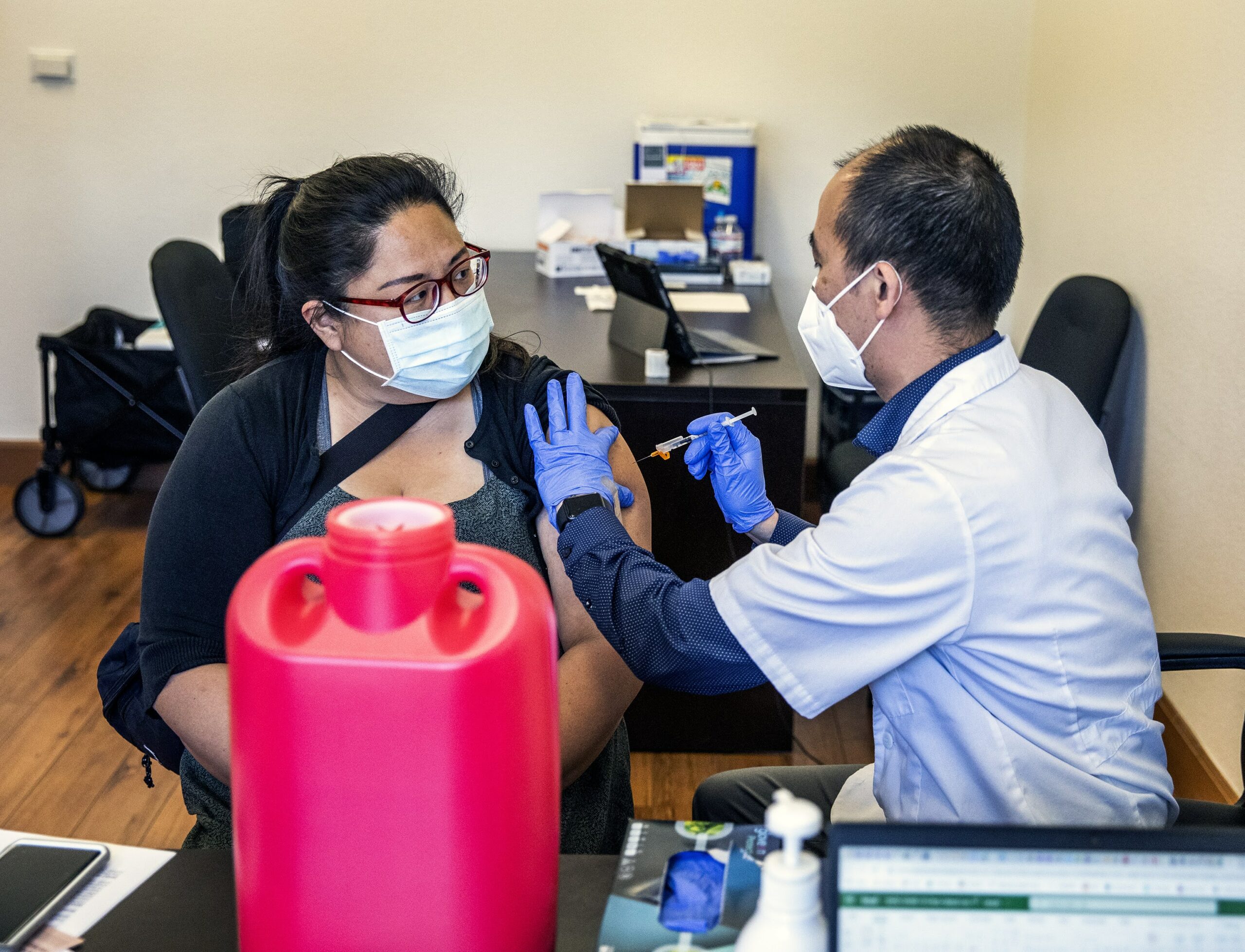 Welcome to the 49th installment of “Coronavirus Contextualized.”

For more than a year, we have brought you the latest COVID-19 numbers in Nevada, including COVID-19 cases, hospitalizations and deaths, and provided context to them on a near-weekly basis through this series. You can view the prior editions of “Coronavirus Contextualized” here.

As noted in the last few editions, we plan to continue providing you with the data you need to know about COVID-19 in Nevada for as long as necessary. However, “Coronavirus Contextualized” now publishes on a semi-regular basis, which means we may occasionally skip a Friday or two if there are no new trends to report.

Below, we explore how COVID-19 cases and hospitalization numbers have remained low as the vaccination effort continues and the state continues to open up — with every county expected to be fully open as of Tuesday.

The number of new COVID-19 cases reported each day has been steadily declining over the last two weeks.

As of Thursday, an average of 209 cases were reported each day over the last seven days, down from 267 the week before and 381 the week before that. The last time the seven-day average was lower than it is now was June 12, 2020, right around when COVID-19 cases first started to climb after Nevada started to reopen following the spring shut down.

For comparison, the number of COVID-19 cases reported in the last week is about half of the cases Nevada was seeing on average reported each day during the worst of the pandemic this fall. On Dec. 10, the peak, the seven-day average hit 2,736.

Since the beginning of the pandemic, about 1 in 10 Nevadans has tested positive for the virus.

At the same time, the test positivity rate, which looks at the percentage of tests coming back positive out of the total tested, has been steadily decreasing for about a month.

It is not possible to independently calculate the test positivity rate based on test encounters because the state only reports the number of positive cases, not the number of positive test encounters. However, the state does provide this number, calculated as an average over a 14-day period with a seven-day lag. As of Wednesday, that number was 4.21 percent, down from 4.8 percent the week before and 5.34 percent the week before that. The test positivity rate is now, once again, below the World Health Organization’s recommended 5 percent threshold.

Since the beginning of the pandemic, more than 1.6 million people — roughly 1 in 2 Nevadans — have been tested for COVID-19, and there have been more than 3.3 million individual testing encounters.

Since vaccinations started in December, nearly 2.5 million doses of the COVID-19 vaccine have been administered in Nevada, up from nearly 2.4 million last week. In total, nearly 1.4 million people have received at least one dose of the COVID-19 vaccine and more than 1.1 million Nevadans have been fully vaccinated. Nevada has received more than 2.8 million doses of the vaccine for distribution.

The pace of vaccine distribution has continued to generally slow. As of Thursday, about 13,000 vaccines were being reported administered each day over the last seven days, down from about 16,000 last week and a high of nearly 30,000 on April 15.

Nationally, Nevada ranks 32nd among the 50 states for percentage of adults given first doses of the COVID-19 vaccine, trailing almost all of its neighboring states except Idaho, which comes in at 44th with 49.6 percent vaccinated. California ranks 12th, at 69.1 percent; Oregon ranks 20th at 64.9 percent; Utah ranks 25th at 60.3 percent; and Arizona ranks 31st at 57.1 percent.

To reach 70 percent, Nevada will need to vaccinate about 325,000 more adults. With an average of 7,000 first doses a day being administered, if all of those shots were given to adults, the state would hit the 70 percent vaccination goal in 46 days — on July 12.

The number of new COVID-19 deaths reported on average each day has continued to generally decline, with some day-to-day fluctuations.

As of Thursday, four deaths were being reported on average each day over the prior seven days, roughly unchanged from last week and slightly down from five deaths two weeks ago.

Over the last seven days, 28 COVID-19 deaths have been reported across the state, including:

COVID-19 hospitalizations continue to decline, again setting a new record low of 243 on Wednesday, the last day for which data is available. The previous record low, 259, was set on March 28, before hospitalizations started to fluctuate for a few weeks.

Nevada hit peak hospitalizations during the fall surge at 2,025 on Dec. 13.

“Nevada continues to see hospitalizations and all critical metrics near the bottom of the scale,” the Nevada Hospital Association wrote in its weekly report. “Nevada has not witnessed any significant hospitalization increases since the counties lightened social distancing protocols on 1 May 2021.”

Four of the state’s 17 counties — Douglas, Elko, Eureka and Lincoln — are considered at elevated risk for the spread of COVID-19 according to state criteria as of Thursday.

While Eureka and Lincoln are flagged for a too low test rate combined with a too high test positivity rate — metrics that are now less concerning as counties may be testing less as more residents get vaccinated — Douglas and Elko are flagged for all three metrics, including a too high case rate.

No other counties have an elevated case rate and, in fact, nine counties, including both Clark and Washoe counties, aren’t flagged for any criteria at all.