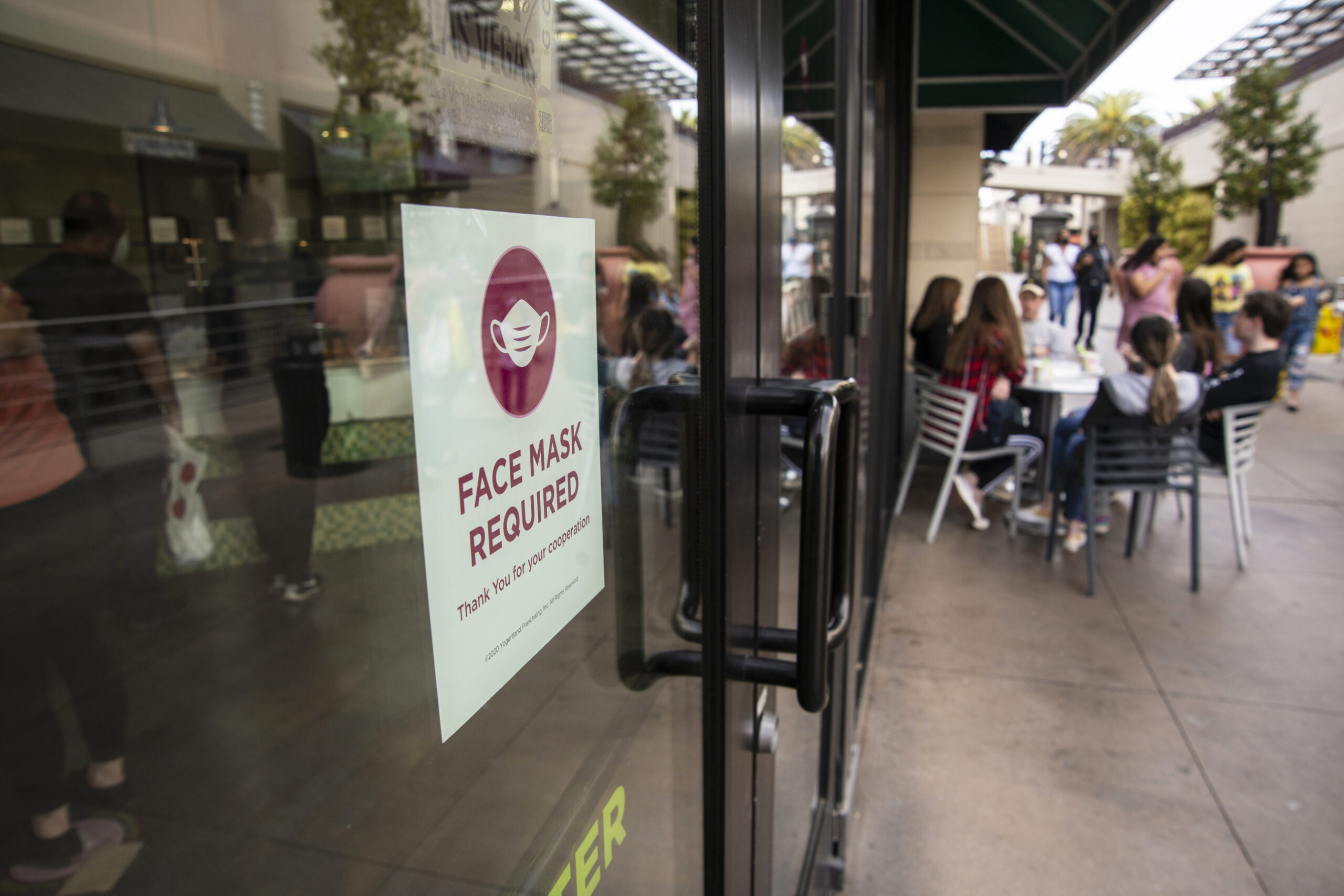 Welcome to the 53rd installment of “Coronavirus Contextualized.”

For more than 15 months we have brought you the latest COVID-19 numbers in Nevada, including COVID-19 cases, hospitalizations and deaths, and provided context to them on a near-weekly basis through this series. (You can view the prior editions of “Coronavirus Contextualized” here.)

Below, we take a look at rising case, hospitalization and test positivity numbers in the state as a new mask mandate in indoor public settings for both vaccinated and unvaccinated individuals goes into effect on Friday for a dozen Nevada counties flagged by the Centers for Disease Control and Prevention this week as having substantial or high disease transmission.

The counties subject to the new mask mandate are Carson, Churchill, Clark, Douglas, Elko, Esmeralda, Lincoln, Lyon, Mineral, Nye, Washoe and White Pine. The state’s remaining five counties, which were deemed by the CDC to have low or moderate transmission, will remain subject to a partial mask mandate only for unvaccinated individuals.

State officials announced Thursday evening that CDC data will be reviewed weekly on Tuesdays and counties must remain in a transmission category for two weeks before mask mandates will be added or removed. Officials also clarified that the mask mandate applies to indoor public spaces, such as grocery stores, malls, casinos and gyms, as well as public or private transportation, including taxis and ride share services.

COVID-19 cases are now nearly as high as they were during last summer’s surge.

Clark County, the state’s most populous county, continues to be responsible for the bulk of the current surge in raw numbers, though most other counties in the state are seeing cases climb as well.

In Clark County, the Delta variant has been responsible for 84 percent of sequenced cases so far in July, compared to 87 percent in Washoe County, 75 percent in Carson City and 36 percent in Elko County.

In total, there have been 554 cases of the Delta variant sequenced in July so far, including 349 in Clark County, 173 in Washoe County, 12 each in Carson City and Elko County, six in Lyon County and one each in Churchill and Pershing counties. Not all positive COVID-19 samples are sequenced, however, meaning those totals likely represent just a fraction of all Delta variant cases.

Since the beginning of the pandemic, there have been 355,091 COVID-19 cases confirmed statewide, meaning 1 in 9 Nevadans has tested positive for the virus. A little more than 6 percent of those cases, 21,937 have been diagnosed in the last month, and a little less than 2 percent, or 7,051 cases, have been reported in the last week.

At the same time, the test positivity rate, which looks at the percentage of tests coming back positive out of the total tested, has also continued to increase.

It is not possible to independently calculate the test positivity rate based on test encounters because the state only publicly reports the number of positive cases, not the number of positive test encounters. However, the state does provide this number, calculated as an average over a 14-day period with a seven-day lag. As of Wednesday, that number was 14.3 percent, up from 12.7 percent last week and 10.9 percent the week before that.

Since the beginning of the pandemic, more than 1.7 million people — 57 percent of Nevadans — have been tested for COVID-19, and there have been more than 3.7 million individual testing encounters.

The pace of vaccine distribution in Nevada has increased over the last week as the state steps up efforts to get shots in arms.

As of Thursday, about 6,600 vaccines were reported administered each day over the last seven days, up from 5,700 last week. That’s still significantly fewer than the state was distributing at its peak of nearly 30,000 on April 15 but up from a recent low of 5,200 on July 13.

Nationally, Nevada ranks 33rd among the 50 states for percentage of its total population fully vaccinated, at 44.2 percent, continuing to trail all of its neighbors except Idaho, which comes in at 45th with 37.3 percent vaccinated. Oregon ranks 12th at 55.8 percent; California ranks 17th, at 52.6 percent; Arizona ranks 30th at 45.1 percent; and Utah ranks 32nd at 44.7 percent.

COVID-19 deaths in Nevada are, once again, on the rise.

As of Thursday, 15 COVID-19 deaths were being reported on average each day over the prior seven days, up from six last week and four at the same point last month.

Over the last seven days, 103 new COVID-19 deaths have been reported across the state — up from 45 last week — including:

COVID-19 hospitalization numbers are nearly back to where they were during last summer’s surge.

The Nevada Hospital Association, in its weekly report, detailed the increasing severity of the situation, particularly in Southern Nevada. In northern and rural parts of the state, COVID-19 patients are taking up 2 to 4 percent of staffed beds, compared to 21 percent and climbing in Southern Nevada, the association said.

The association added that it believes the state can “reasonably anticipate” reaching 1,400 hospitalized COVID-19 patients by the second week in August, at which point in time “clinical and nursing staff shortages” is an “anticipated concern.” The association said that at least seven hospitals have reported they are currently surging above their licensed bed counts, five hospitals have already reported staffing shortages and multiple hospitals are reporting an ICU occupancy above 90 percent.

The association said no hospitals are reporting shortages or anticipating shortages of medical supplies, PPE, ventilators or medications at this time.

Chris Lake, executive director of community resilience for the Nevada Hospital Association, said on a press call with reporters on Thursday that hospitals are taking steps to address the high patient volume, including enacting surge protocols, implementing team nursing and postponing procedures "if it's a particularly heavy day in the ER at the hospital."

Twelve of the state’s 17 counties are now considered by the state as being at elevated risk for the spread of COVID-19 as of Thursday. That’s all except Humboldt, Pershing, Lander, Storey and White Pine.

The state, however, has aligned its mask mandate to follow federal guidance, meaning it is using the CDC’s community transmission tracker to determine which counties are at substantial or high risk for the spread of COVID-19 and therefore required to abide by indoor mask mandates for vaccinated and unvaccinated individuals alike.

As of Thursday, all Nevada counties except Pershing, Humboldt, Lander and Eureka were considered at risk of high or substantial levels of community transmission.

Storey County, which was newly flagged as being at risk of “substantial” transmission on Thursday, will not be subject to the new mask mandate taking effect on Friday, state officials said on Thursday.