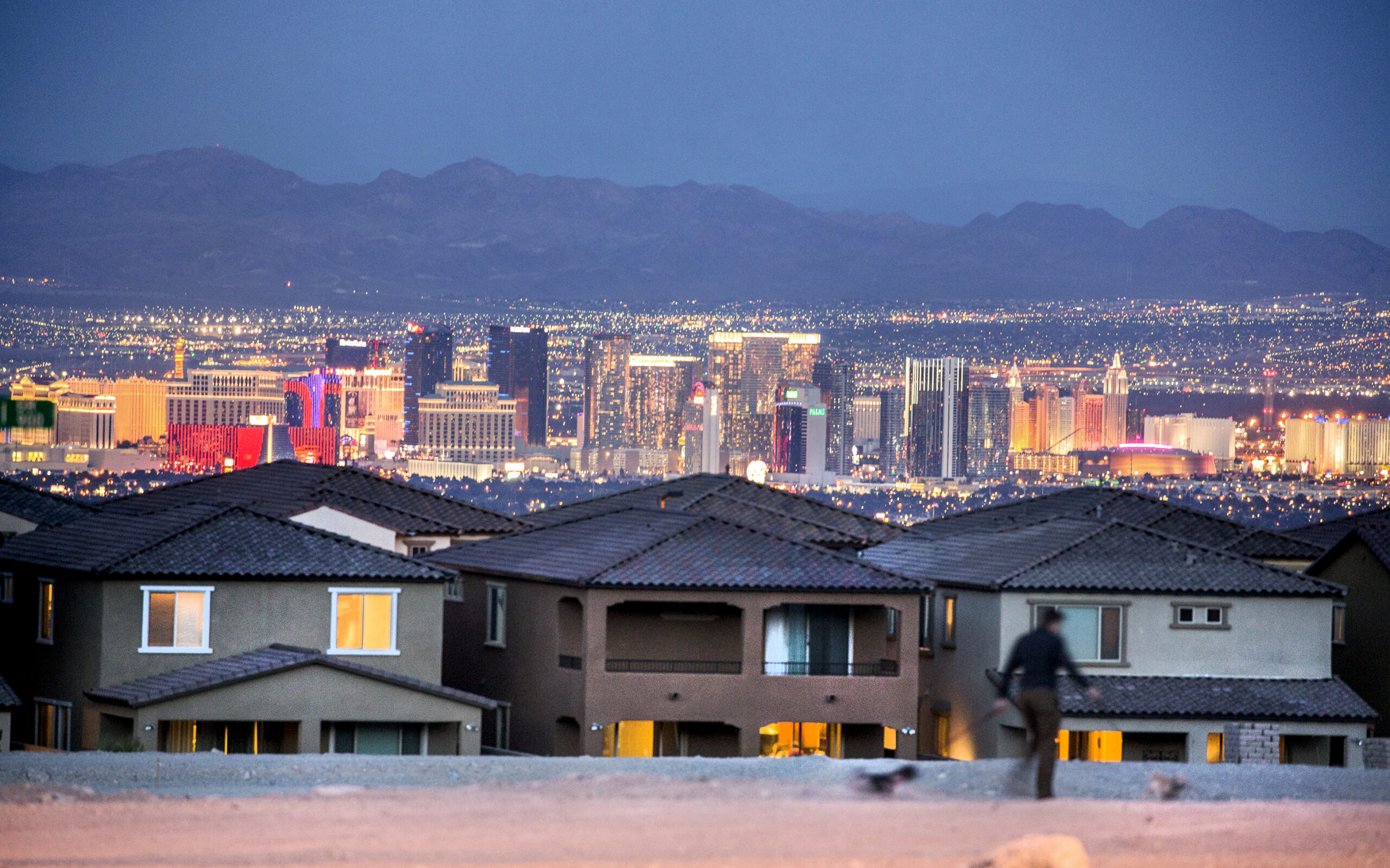 Three years ago, Virginia and Donald Hartwig bought a ranch-style home in northwest Las Vegas for a dual purpose.

First, it would serve as a rental property, supplementing their meager monthly income.

Then, the couple would move from North Augusta, South Carolina, and make it their retirement haven.

Virginia Hartwig, 79, considered it the perfect landing spot for multiple reasons: The home has three bedrooms, no stairs and an open layout, making it easy to maneuver a wheelchair or keep an eye on her 81-year-old husband who has Parkinson’s disease. It’s also 15 minutes away from her daughter and grandchildren.

But their plan hit a major financial snag before the cross-country move could occur. After the pandemic erupted and Nevada implemented an eviction moratorium, their tenants abruptly stopped paying the monthly $1,550 rent and ceased communication with the property manager.

“When they stopped paying, I was really shocked,” she said. “They had good credit.”

Hartwig said they rely on the rental income to offset steep medical costs. Her husband, bedridden since April after a fall, has been receiving help from home health-care workers at a price tag of $35 per hour. Without the rental money, she said it’s putting a strain on their finances, which include Social Security payments and her small pension.

As mom-and-pop landlords, the Hartwigs are among a group of people who say they’re being unfairly harmed by policies protecting tenants while leaving owners on a financial cliff. Some have fallen behind on mortgages or are chewing through their savings to keep afloat. And it’s unclear how soon they will secure any form of relief. A federally funded rental assistance program with $60 million available statewide has stopped accepting applications in Clark County, at least for now. As of Wednesday, Clark County had allocated $1.7 million worth of rental assistance to 732 households. Another 5,300 applications remain in the queue as officials work to determine if they’re eligible.

The state’s eviction moratorium lifts Tuesday, but all indications point toward no easy solution. In July, the Legislature approved a tenant mediation program designed to prevent a court logjam of eviction cases, but officials with the Supreme Court say the program likely won’t be fully activated until late October.

A 2015 American Housing Survey offers a glimpse into the makeup of the landlord side. Of the 48.5 million rental units nationwide, slightly more than half (25.8 million units) are owned by business entities. The rest are owned by single investors, often referred to as mom-and-pop landlords, who likely own single-family or duplex rental homes.

In Southern Nevada, nearly 75 percent of single-family rental homes are owned by mom-and-pop landlords, Hamrick said. The term refers to people who own up to 10 rental properties, although most have fewer than a handful.

Their reasons for entering the rental market vary. For some, it was their first home and they kept it as a source of extra income, or, like the Hartwigs, bought it as a future retirement home. Others simply buy properties for investment purposes. Military personnel and others who need to relocate temporarily also commonly rent out their properties.

Chris Bishop, president of Nevada REALTORS, said the vast majority of small-time landlords understood the intent of Gov. Steve Sisolak’s March directive that halted evictions. At the time, state officials even noted that, “the overarching goal here is to keep people at home” and not to “transfer financial hardship from one group of individuals to another.”

Still, one month became two and then three and, by the time Tuesday rolls around, the eviction moratorium will have been in place five months. And for those landlords with non-paying tenants, it has been a juggling act balancing lost rental income, mortgages for the properties, utilities, repairs and homeowner association fees.

In Southern Nevada, about 18 percent of tenants didn’t pay rent last month, according to data from the Household Pulse Survey conducted by the U.S. Census Bureau, which is tracking the social and economic effects of COVID-19. And 40 percent have little or no confidence they will be able to pay rent this month.

While it’s impossible to foretell exactly how the expiration of the eviction moratorium will play out, an analysis by the Guinn Center and COVID-19 Eviction Defense Project from earlier this summer estimated that as many as 327,000 Nevadans could be at risk for eviction in September. Low-income residents as well as undocumented immigrants and people of color will be most vulnerable.

Landlords interviewed by The Nevada Independent, including several who did not want their names published, said they would be more than willing to work with tenants legitimately struggling to pay rent because of a job loss or other mitigating factors. But their frustration stems from tenants who are still employed or receiving unemployment assistance who have refused to pay or discuss options.

The eviction moratorium did not absolve tenants from their rent responsibilities. In fact, a guidance document for the governor’s directive specifically says it “does not mean tenants are free of their rent or mortgage obligations. Landlords have bills to pay and providing housing involves many costs to them.”

But property owners say they have little recourse to ensure payment. Even the CARES Housing Assistance Program asks landlords to direct their tenants to apply for funding.

Nevada Treasurer Zach Conine said tenants must apply because, per the federal funding parameters, the state needs to verify that non-payment of rent is tied to the pandemic and its economic ripple effect. It would be too difficult for landlords to prove why their tenants weren’t paying, he said. However, when certification does occur and the rental assistance can be distributed, it goes directly to landlords.

Conine said landlords can also work with their mortgage lenders on forbearance — the pausing or reduction of payments — or ways to avoid penalties and interest. On Thursday, the Federal Housing Finance Agency announced it was extending its foreclosure moratorium on single-family mortgages backed by Fannie Mae and Freddie Mac through the end of the year. The move should protect roughly 85 percent of single-family homeowners in Nevada.

But Danielle Gallant, a managing partner with Guardian Realty Investment and Property Management in Henderson, warned that forbearance isn’t always helpful. It depends on the arrangement. If deferred payments are due within a matter of months — as opposed to tacked onto the end of the mortgage — it may not be enough time for landlord homeowners to gather the money.

With the new tenant mediation program not even up and running yet, she’s not optimistic landlords will receive their owed money in any sort of swift timetable.

“I don’t think we have enough mediators to handle what’s coming down,” she said. “I have a feeling it’s going to take even longer.”

Conine urged open lines of communication between all parties involved, especially given the nature of the predicament — a pandemic that knows no bounds and has affected life in one way or another for everyone.

Hamrick echoed the need to work together and be humane as the thorny process — causing headaches at all ends of the spectrum — moves forward. Education about available resources, she said, is also key.

“I don’t think anybody could have sat down in March and said, ‘Here’s what we are going to do and it’s going to be perfect,’” she said.

Conine said his team is doing its best to walk the line of “effective deployment of capital and quick deployment of capital.” In his view, that means getting rental assistance approved for tenants who are already behind on payments. But the process relies on completion of paperwork, which has bogged down the distribution. The head of the Reno Housing Authority, which is administering $5 million worth of rental assistance funds, said on Wednesday that only 232 of more than 1,600 initial applicants had completed follow-up steps. As a result, the authority had only paid out $22,000.

Housing industry experts say all the uncertainty and financial tangles have left some mom-and-pop landlords wanting to walk away from the business and sell their properties when they are able to do so. Soaring housing prices may be spurring them along as well: The median price for single-family homes in Southern Nevada hit $330,000 last month, setting a record.

“There’s no question that it has put in some concern with the investor,” Bishop with Nevada REALTORS said, referring to the eviction moratorium and non-paying tenants. “They don’t want to be investors.”

That’s the case for Virginia Hartwig. She’s eagerly awaiting the lifting of the eviction moratorium.

“As soon as I am allowed to, I am going to give them notice to pay up the back rent or I’m going to terminate their lease for nonpayment of the rent,” she said.

There’s no telling how long that process could take. Hartwig said she and her husband want to move to Las Vegas as soon as they can.

“We’re just trying to get back home,” she said.