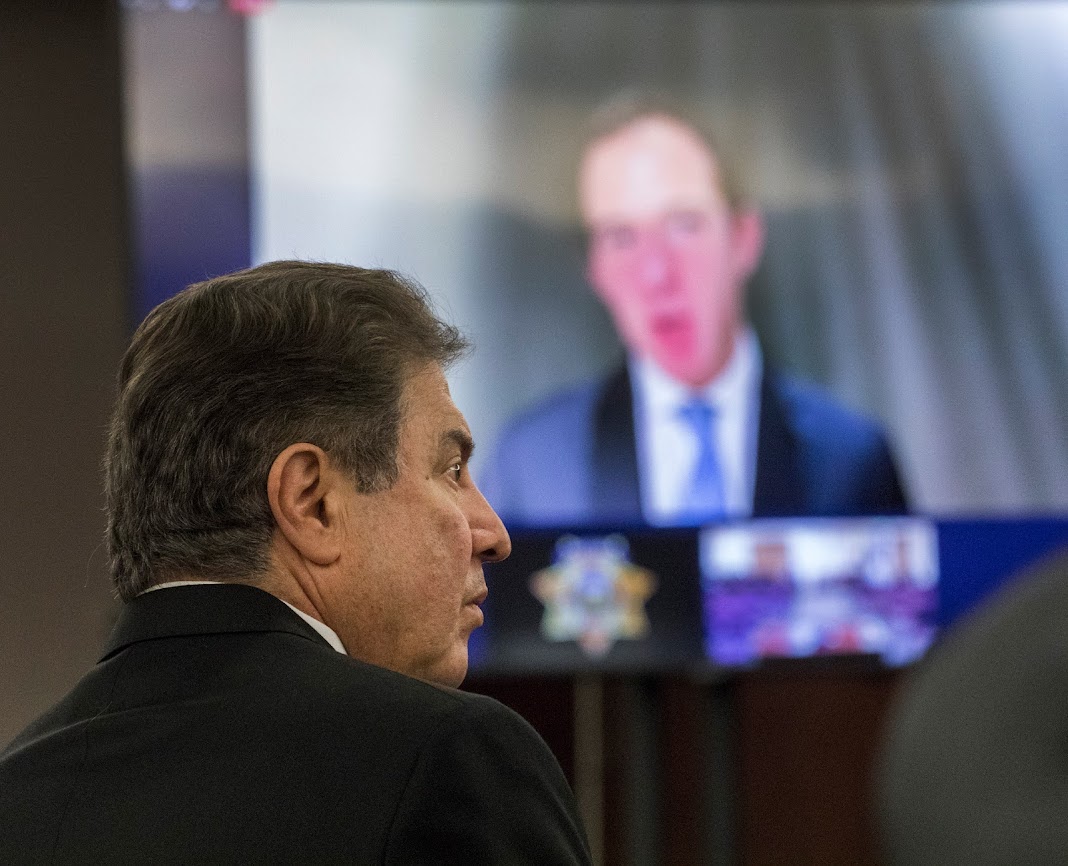 He brought up the so-called “elephant in the room” 20 minutes into the conversation during a hearing Thursday in which the New York City-based private equity firm sought regulatory approval for its part in the $6.25 billion acquisition of the Strip properties owned by Las Vegas Sands Corp.

Ultimately, the Nevada Gaming Commission voted 4-0 to approve Apollo as the operator of the Venetian, Palazzo and Venetian Expo. Apollo is paying $2.25 billion for the operations, while real estate investment trust VICI Properties is paying $4 billion for the 63-acre site and an additional 19 adjacent acres off Koval Drive where the $1.8 billion MSG Sphere is under construction.

The transaction, announced 11 months ago, could be finalized next week.

During the meeting, gaming commissioners probed Apollo’s last venture in Las Vegas, its 11-year ownership in Caesars Entertainment, which began in 2008 as a $30 billion leveraged buyout of the casino operator in partnership with fellow private equity firm TPG Capital.

It ended in 2019, two years after completion of a complicated, two-year Chapter 11 bankruptcy restructuring that changed Caesars’ ownership structure and wiped $16 billion of the company’s pre-bankruptcy $25.6 billion in debt off the books.

The discussions concerning Caesars took almost as long as the exploration of the company’s current relationship with Black. Following the full two-hour hearing in Las Vegas, gaming commissioners said they were satisfied with Apollo's responses on both topics.

Sambur, who appeared via video conference at a location he didn’t disclose “a half-a-world-away,” told the gaming commissioners the debt-loaded Caesars deal and the Sands agreement were “two polar opposite transactions. The Venetian deal will have $18 million of interest expense and Caesars had $2 billion of cash obligations."

Las Vegas Sands is also providing $1.2 billion of seller financing, with the private equity company putting up another $1.05 billion in cash and financing.

"I am truly convinced that what we're looking at today is a different scenario,” Cohen said.

Sambur said that Sands was looking to sell its Las Vegas holdings for $6 billion when he was approached in late 2020. But he said there wasn’t any direct debt financing available at the time because of the pandemic. Also, the Venetian properties had a negative cash flow in late 2020 because of reduced visitation and pandemic-related operational guidelines.

He said it was his idea to approach VICI Properties, a real estate investment trust which was created in 2017 out of the Caesars bankruptcy, about joining in the deal.

VICI Properties is in the process of acquiring rival REIT MGM Growth Properties for $17.2 billion. When that transaction closes in the next few months, the company will become the landlord to Strip hotel-casinos operated by MGM Resorts International, Caesars Entertainment and Apollo.

While the Caesars bankruptcy was addressed, getting past Apollo’s relationship with Black was more of a challenge.

Sambur and general counsel Brian Carney walked the commissioners through several steps the company has taken to separate itself from Black, who remains a 12 percent shareholder in the publicly-traded company but has no influence over management and Apollo’s board of directors.

Sambur said changes were made in Apollo’s corporate structure that will have the firm operate and manage "like any other public company."

Carney also said Black has agreed not to seek a seat on the company’s board or put up a candidate for a board seat.

Still, Kieckhefer asked that a seventh condition — that commissioners be notified immediately should the situation with Black change — be added to the Apollo license, in addition to the six adopted by the Gaming Control Board when it recommended approval on Feb. 2. The three-member board explored many of the same issues during a more than two-and-a-half-hour hearing in Las Vegas.

“We shouldn’t have ongoing concerns (with Black) given all of the structures that we have in place,” Kieckhefer said.

Sambur discussed a few ideas for the Sands operations, which have a combined 7,100 hotel rooms, 225,000 square feet of casino space and 2.3 million square feet of convention space. Apollo is already developing a master plan for the facilities.

“This integrated resort in Las Vegas is a credit to the founder of Las Vegas Sands, Mr. (Sheldon) Adelson, and it's an irreplaceable physical infrastructure,” Sambur said. The current Venetian management, led by General Manager George Markantonis, would remain in place.

He also discussed adding rooms to the site and possibly restarting the St. Regis condominium tower, which was halted in 2008.

“I do think that there's the potential of more rooms on the property, especially to support the convention business when it comes back,” Sambur said. “So we are going to undertake a more detailed study about whether it would be best to place those rooms in that tower or on property."

Apollo was also an investor in the Aliante Casino in North Las Vegas before it was sold to Boyd Gaming.

At the outset of the hearing, three gaming commissioners disclosed they had done either legal work or handled government affairs issues on behalf of Las Vegas Sands or Apollo.

Gaming Commissioner Rosa Solis-Rainey recused herself from participating in the Apollo licensing because her firm is representing the company in a lawsuit, although she is not involved in the matter.