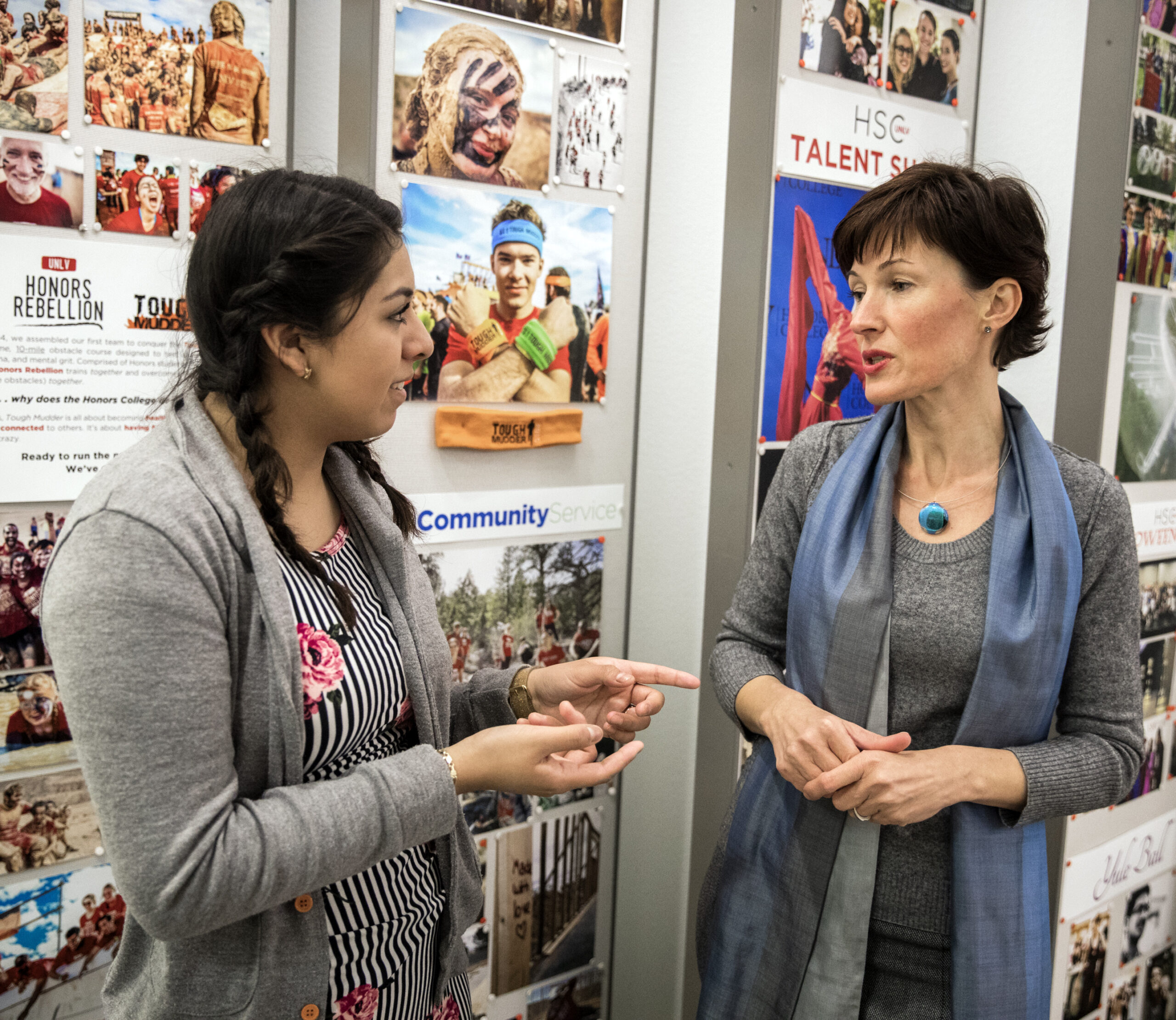 A program that started in Las Vegas a little more than three decades ago continues to pursue its goal: Ensure the valley’s highest achieving high schoolers attend college in Nevada, get a top-flight education and don’t take their talents elsewhere.

It’s called the UNLV Honors College, and new enrollment has tripled in the past six years.

Although the school-within-a-school, located in the heart of the UNLV campus, expects students to make an extra effort, it also channels their potential with smaller classes, the opportunity to graduate with honors and a curriculum that emphasizes intellectual enrichment.

“We want to be a place for high achieving students, they can come to UNLV, have a home here, they’re in small classes, they get the experience of being like in a small liberal arts college,” said Andrew Hanson, acting dean for the Honors College. “But they’re in a large research university, and so they sort of get the advantage of both of those things.”

Honors University students complete the core curriculum of the school, which includes UNLV’s general education credits, while Research and Creative Honors requires students to participate in a special research project or a creative project culminating in a thesis related to their area of ​​expertise.

The growth of the Honors College comes against the backdrop of efforts to both raise the prestige of Nevada’s universities and prevent “brain drain” from the state.

After a focused, yearslong effort, UNLV obtained a Tier 1 research university status in late 2018, UNR was also added to the prestigious list. The designation puts the universities in the top 130 in the country and recognizes them for both a high level of research activity and a high number of advanced degrees given.

And for 20 years, Nevada has been trying to retain its highest-achieving students within state lines through the Millennium Scholarship, which provides thousands of dollars each year for tuition to Nevada students with a 3.25 GPA or better who attend an in-state college or university.

The Honors College shares the goal of continuing to push students towards a path of excellence, requiring high marks of its applicants. To be admitted, freshman applicants must submit an essay, letters of recommendation, excellent marks on either the ACT or SAT exams and a summary of extracurricular activities in which they have participated.

"After four or five years, whatever courses they take to graduate, students receive a diploma with honors," Honors College Professor Joanna Kepka said in an interview with the Cafecito con Luz y Michelle radio show. “Students receive all the support and attention they need to fulfill what they’ve started. That's the promise this school makes."

The UNLV Honors College launched in 1985 thanks to the vision of physics professor Len Zane, who believed UNLV would benefit by paying special attention to its high-achieving students.

Zane served as the Honors College dean for about 15 years. The program took a new turn in 2012 when current interim UNLV president, Marta Meana, took over as dean. Meana focused on recruiting more students from the university and those who are attending institutions outside of Las Vegas.

Hanson said that the Honors College now has a little more than 1,100 students.

Since the beginning, the vision of the Honors College has been to build a program with the kind of rigor that students would seek out at prestigious colleges, but at a fraction of the cost and without leaving Las Vegas.

The effort is paying dividends. Several Honors College students have distinguished themselves for their outstanding achievements when they graduated from the program.

One example is Charlotte Rosiak, who earned her bachelor's degree in hotel management at age 16 and was accepted into the Boyd School of Law.

Hanson also said the school works to actively identify students who may apply for nationally competitive grants, such as the Barry Goldwater Scholarship, which provides up to $7,500 dollars and for which four students of the program were nominated in late January. A UNLV student was among the 200 or so students selected nationwide as a 2018 Goldwater Scholar.

In addition to encouraging academic excellence, the Honors College also aims to have a student body as diverse as the population of Las Vegas itself.

"Let’s say that, if in the boardroom of a company all executives have the same background, they will face problems," Hanson said. "But if there are people in this room who have different views, the chances that someone will find a new and creative way to address a problem actually increases. That's why diversity matters."

UNLV accounting student Ingrid Zarate is an example of such efforts. Originally from Mexico, Zarate arrived in Las Vegas with her parents when she was 13 and graduated from Del Sol Academy of the Arts with a 4.0 GPA.

Zarate said in a recent interview that her next goal was to go to UNLV and specifically to the Honors College, something that wouldn’t have been possible without the support the program provided to her. She is a beneficiary of the Fulfillment Fund Las Vegas, which helps low-income students not only to continue their path to college but also to graduate.

Zarate currently works for a local accounting firm and plans to intern this summer with Ernst & Young, a multinational professional services firm.

"This school gave me everything. When I explained to them that I wanted to go to college, it was my dream to be someone in life, I was offered a scholarship and they helped me find the necessary financial resources," she said. "[Students and their parents] can’t give up. I know that after high school we often say 'I can’t do this anymore,' but you can.”

Note: This story was updated on February 27, 2019 to add the link and "Las Vegas" to the name of the Fulfillment Fund organization.