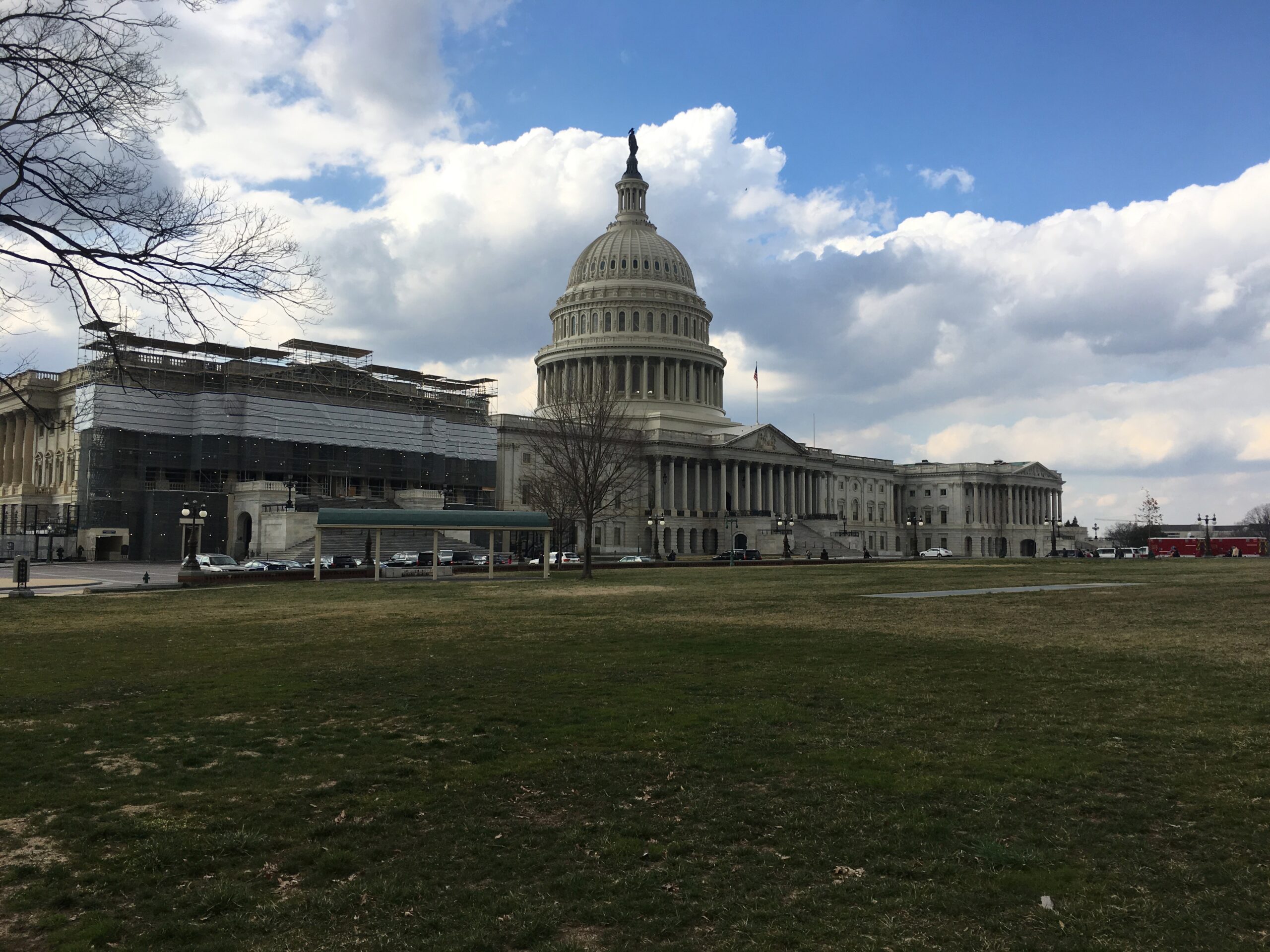 The Senate confirmed the nomination of Amy Coney Barrett to the U.S. Supreme Court last week, a move that strengthened the conservative bloc on the court for years to come.

The Monday evening vote—which passed with only Republican support—came after frustrations boiled over regarding the progress of negotiations between Speaker Nancy Pelosi and Treasury Secretary Steven Mnuchin on the next pandemic aid package. The two exchanged dueling letters last week that highlighted their differences.

At her weekly press conference, Pelosi told reporters she remained optimistic that a deal could be reached during the lame duck session after the election next week and before the inauguration of the next president, who she is “confident” will be Democratic nominee Joe Biden.

The aid would likely help states like Nevada, which is heavily dependent on the travel and entertainment industries that have been laid low by the pandemic. The Silver State posted an unemployment rate of 12.6 percent in September. That was the second-highest in the nation behind Hawaii, which had a 15.1 percent rate last month.

The House was not in session last week and will not return until the week of Nov. 16. The Senate adjourned after the Barrett confirmation. The chamber will be back in session on Nov. 9.

In a letter to Mnuchin dated Thursday, Pelosi pressed the Treasury secretary on a response to compromise language on a strategy for pandemic testing and tracing. Democrats’ latest

“Your responses are critical for our negotiations to continue,” Pelosi said.

Pelosi’s comments come as COVID-19 cases are on the rise in Nevada. Washoe County, for example, last week reduced its cap on public gatherings to 50 from 250 people. That will go into effect beginning Nov. 5 and is the same restriction that was in place before Gov. Steve Sisolak loosened restrictions on public gatherings last month.

She also said she’s waiting to hear back from the White House on funding for state and localities, schools, child care, tax credits and language to shield businesses from liability related to the virus.

The Democrat’s bill would provide $436 billion to assist state and local governments, restore a $600 a week bonus payment through January for those collecting unemployment insurance benefits and expand the eligibility of certain tax credits, including the earned income tax credit.  The EITC is a refundable tax credit for low- to moderate-income working individuals and couples, particularly those with children. With regard to liability, the bill would require the Labor Department’s Occupational Safety and Health Administration to issue regulations for workplaces to protect workers against COVID-19.

Pelosi told reporters Thursday she hopes to get an agreement on COVID aid after the election in order to begin work with the Biden administration, assuming he wins, on other priorities, including infrastructure and expanding access to health care.

“We want to have as clean a slate as possible going into January,” Pelosi said.

While she underscored her desire for a deal, the number of areas of disagreement did not portend for a quick resolution.

Mnuchin called her letter a “political stunt” because she released it to the public at the same time it was sent to the Treasury secretary. He also said Pelosi had taken an “ALL OR NONE approach” in negotiations that is “hurting hard-working hard-working Americans who need help NOW.”

The Treasury secretary also said Pelosi misrepresented the state of the talks. He said that the White House had provided “reasonable responses” that agreed for the most part with Democratic language on testing and tracing, including on funding, but also gave the states more authority “as they have varying circumstances.”

But Drew Hammill, Pelosi’s spokesman, said that the White House response was not sufficient.

“Two weeks later, the White House still has not lived up to Secretary Mnuchin’s promise to accept Democrats’ language to crush the virus, and we still are waiting for meaningful responses in the areas the Speaker outlined,” Hammill said on Twitter in response to Mnuchin.

Mnuchin also cited efforts by the White House to reach out to the Problem Solvers Caucus, which includes Republican Rep. Mark Amodei and Democratic Rep. Susie Lee. The group, made up of 25 Democrats and 25 Republicans, introduced a $1.5 trillion bill last month, which drew praise from President Donald Trump and helped spur the negotiations, which had broken down at the time. Mnuchin criticized Pelosi for dismissing the proposal.

“You rebuffed this effort,” Mnuchin said.

They argued that Barrett would cast a crucial vote against the Affordable Care Act (ACA). The ACA is a sweeping 2010 health care law designed to insure more people, including expanding Medicaid eligibility, establishing insurance exchanges and requiring insurance companies to cover people with pre-existing medical conditions.

The law is being challenged by a group of Republican state attorneys general and the Supreme Court is scheduled to hear arguments in the case on Nov. 10, a week after the election.

Cortez Masto, who opposed Barrett’s 2017 confirmation to her previous post on the U.S. Court of Appeals for the 7th Circuit in Chicago, said that Barrett was tapped for that appeals court position and subsequently to replace the recently deceased Justice Ruth Bader Ginsburg because of her apparent hostility to the ACA.

While a professor at Notre Dame, Barrett wrote a book review that was critical of Roberts’ legal reasoning in two previous cases challenging the ACA in which Roberts sided with the liberal bloc on the court and preserved the law.

“Professor Barrett fits their profile,” Cortez Masto said of the Senate Republican Leader Mitch McConnell and Republicans writ large who have pressed to overturn the ACA for a decade.

“I opposed her then for the same reason I oppose her today,” Cortez Masto continued.

At her confirmation hearing earlier in October, Barrett took issue with senators seeking to read into how she would rule in an ACA case from that book review and made the distinction that her analysis as a scholar would differ from her analysis as a judge in a case.

“One of the upsides of being an academic is you can speak for yourself,” she told Democratic Sen. Amy. Klobuchar of Minnesota. “It’s difficult for me to say how I would have decided that case if I had to go through the whole process of judicial decision making.”

Republicans at the hearing also sought to deflate the Democrats’ ACA criticism by pointing out that Barrett has not written about the issue at hand in the upcoming case, which is whether the ACA is unconstitutional after the law’s individual mandate provision, which required the purchase of health insurance, was repealed as part of a GOP-authored tax reform package enacted in 2017. In legal parlance, the matter is called severability.

She also spoke of her view on the issue of severability when questioned on the legal doctrine by Senate Judiciary Committee Chairman Lindsey Graham—a departure for Barrett who demurred when prodded on other specific topics by Democrats.

Barrett indicated that her reading of severability includes a bias in favor of preserving the law, which keeps judges from making policy—a tenet of conservative jurisprudence.

“The presumption is always in favor of severability,” Barrett told Graham.

Nevertheless, Democrats, including Cortez Masto and Rosen, are skeptical.

“This administration’s attempt to use the court to take away Americans’ health insurance and raise the cost of care, especially at this moment – during a global pandemic – is not only cruel, and reckless, it’s also deadly,” Rosen said in her speech.

Rosen participated in a Senate Commerce Committee hearing Wednesday, and she urged Facebook CEO Mark Zuckerberg, Twitter CEO Jack Dorsey, and Google CEO Sundar Pichai to alter their recommendation algorithms so that they do not work for content that could inspire violence.

“Your platforms’ recommendation algorithms can drive people who show an interest in conspiracy theories far deeper into hate, and only you have the ability to change this,” Rosen said.

The tech giant chiefs said they have protocols in place but are working to be more responsive.

Zuckerberg touted quarterly transparency reports that the company puts out, which include some details on how Facebook cracks down on certain categories of content such as hate speech.

“In general, for each category of harmful content, whether it’s terrorist propaganda or incitement of violence and hate speech, we have to build specific AI systems,” Zuckerberg said. “One of the benefits of transparency and transparency reports into how companies are doing is we have to report on a quarterly basis how effectively we’re doing at finding those types of content so you can hold us accountable for how nimble we are.”

S. 4877 – A bill to amend the Internal Revenue Code of 1986 to establish a refundable tax credit to help middle class taxpayers.