Indy Explains: How deceased Nevadans are removed from the voter rolls 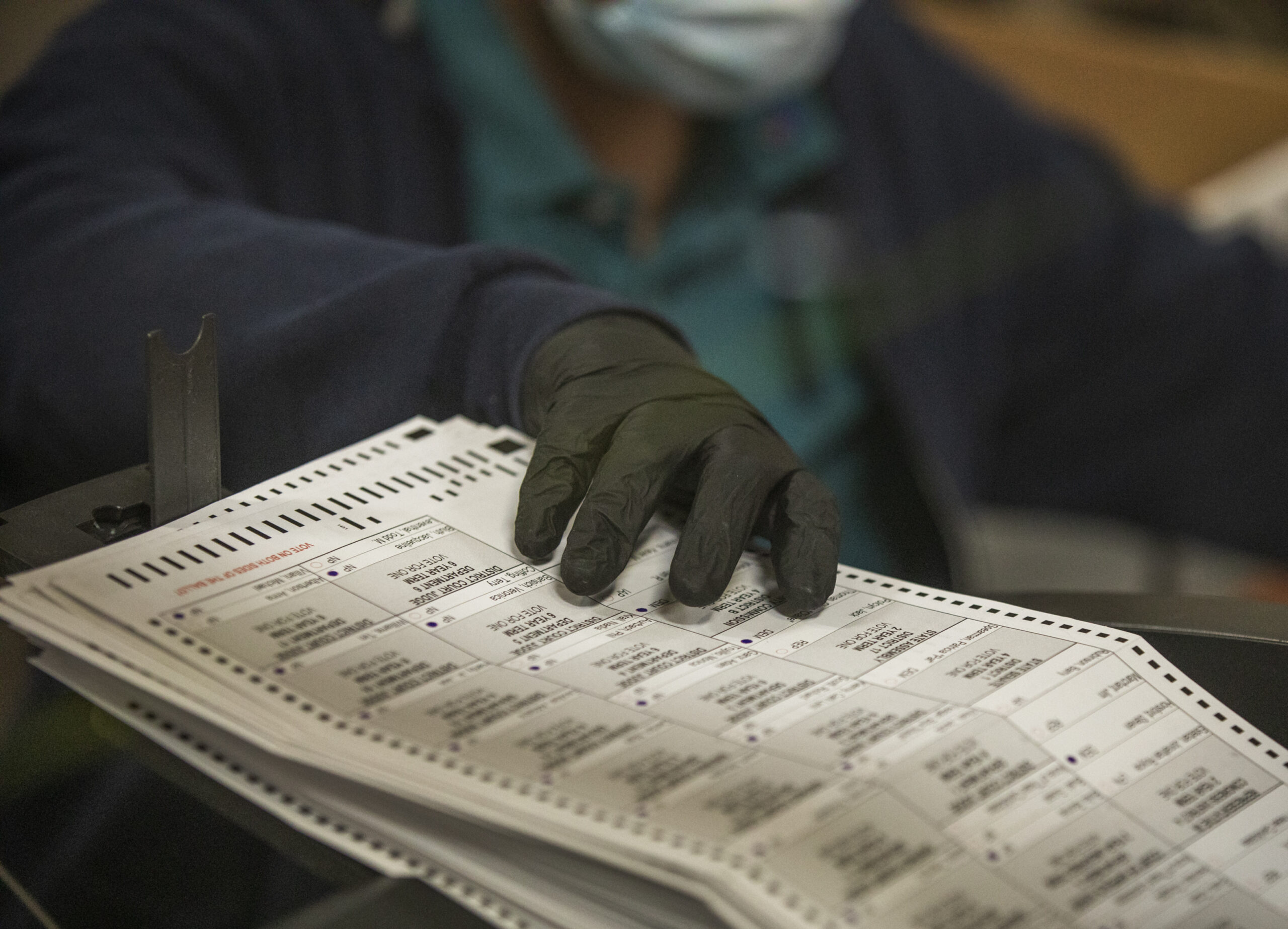 America has a long history of dead people casting votes.

Though they may not change the outcome of an election or constitute widespread fraud, votes cast by the deceased seem to grab headlines nearly every election cycle — from claims that the “cemetery bloc” helped John F. Kennedy win Illinois in 1960 to the high-profile case of Nevada resident Donald Kirk Hartle voting his dead wife’s ballot in 2020.

Recent investigations have revealed the practice of dead people voting is rare and has a miniscule effect on elections. But unfounded claims about the role of dead voters in the 2020 election have sparked confusion about the safeguards in place to protect from such votes being cast.

Following his defeat, former President Donald Trump alleged that 5,000 dead voters in Georgia cast ballots in the 2020 election. But an investigation by state officials found only four cases, all involving family members casting votes for the deceased, as in the case of Hartle.

In Nevada, the secretary of state’s office conducted an investigation into the Nevada Republican Party’s alleged evidence of massive voter fraud in the 2020 election, including claims of more than 1,500 ballots cast by deceased voters.

The investigation — which found no “evidentiary support” of widespread fraud — found just 10 of those individuals were actually deceased and appeared to have a questionable record. Those cases were turned over to law enforcement for investigation.

Despite the scarcity of deceased voters, state officials are still hoping to minimize concerns about those cases and what they mean for election security. Nearly a fifth of registered Nevada voters, including 29 percent of Republicans, have little or no confidence that the 2022 election results will be accurate, according to an April Nevada Independent/OH Predictive Insights poll.

So how does the state remove deceased people from the voter rolls? What safeguards are in place? And where are the cracks in that process that could allow a deceased voter’s ballot to be cast?

Under what circumstances can a deceased voter have their registration canceled?

Though maintaining up-to-date voter registration information is a priority for Nevada election officials, county clerks (synonymous with “registrars of voters” in populous Clark and Washoe counties) can only cancel a deceased voter’s registration after their death has been officially confirmed.

This confirmation primarily occurs through a state-led process. The state Office of Vital Statistics receives a person’s death certificate, and on each business day, the office transmits that data to the secretary of state’s office, which in turns compares the data against the statewide registered voter list, compiled from the state’s 17 counties.

If a registered voter is identified as deceased, the secretary of state’s office will notify the appropriate county clerk, who will then cancel the person’s registration.

Nevada is also one of only a handful of states where a clerk may cancel a voter’s registration “if the county clerk has personal knowledge of the death of the person.”

During an April meeting of an interim legislative elections committee, Deputy Secretary of State for Elections Mark Wlaschin said some of the state’s clerks and their staff watch for obituaries in the news to potentially suss out deceased voters.

“If they hear about an unfortunate passing of an individual or a longtime community member, they look at their registration list to see if that individual is on there, so they can possibly act upon it,” Wlaschin said.

How does the state learn about a person’s death?

While election officials are able to swiftly act on deaths confirmed by the state to cancel a voter’s registration, in some cases, a registered voter may be dead for days or weeks before state officials can confirm that information.

The Office of Vital Statistics — a state agency that maintains birth and death records — works with funeral homes, physicians, coroners and families to obtain death certificates.

Generally, when a person dies, a funeral home or coroner’s office will create the death record. Then the Office of Vital Statistics reviews it for completeness and accuracy. If everything is in order, the office can register the death certificate and send it off to other state and federal agencies.

But that process can often be delayed.

That leaves 6 percent of deaths that were unconfirmed by the state for more than a month, potentially leaving some deceased voters on the rolls for weeks after their passing.

Wlaschin pointed to a few different reasons finalizing someone’s death certificate could be delayed — from a family member not having the deceased’s Social Security number, to the individual being someone who was homeless or lived alone. He emphasized the importance of ensuring the state has all of the correct information, so active registered voters are not disenfranchised by having their registration incorrectly canceled.

“If it's ever questionable, if there's a John Smith, and there's a number of John Smith's, we're not just going to cancel until we know exactly which John Smith, which birthdate, which Social Security number, that sort of thing,” Wlaschin said in an interview.

How could a dead voter receive a ballot?

Prior to 2020, it was extremely rare in Nevada for any deceased voter to receive a ballot. The vast majority of voters visited in-person polling locations to cast their ballots, while a small share of people cast votes via absentee mail ballots (less than 10 percent in 2018).

But that dynamic shifted dramatically during the 2020 election, as nearly half of all voters submitted a mail ballot amid sweeping election changes adopted during the COVID-19 pandemic.

Under the new process, all active registered voters are mailed a ballot, unless they opt out of the mail process. As the certification of some deaths are delayed, so too are the cancellations of those voters’ registrations, leaving open a window for a ballot to be mailed to a deceased voter.

In 2020, the state found approximately 50 individuals who died shortly before they were sent a mail ballot, though a post-election analysis uncovered just 10 cases of voting that were referred to law enforcement for investigation.

What happens when someone votes using a dead person’s ballot?

In the small number of cases that a ballot is mailed to a deceased voter’s address, a family member, such as in the case of Hartle, or a new tenant living at that address could break the law and attempt to vote that deceased individual’s ballot. Doing so is a felony punishable by up to four years in prison.

If that occurs, the first step in preventing the ballot from being counted is the signature verification process, Wlaschin said.

“If there's any question at all about that signature, it's going to go to the signature curing process, where the voter’s going to have to talk to the county election official and confirm that, yes, it was them,” he said.

He added that the curing process helps highlight if a signature has been forged, and if it has, the case will quickly be referred to law enforcement. A bill passed during the 2021 legislative session, which permanently expanded mail-in voting in Nevada, also includes a requirement for local election officials to complete an annual class on forensic signature verification.

“If it appears there's something off where an individual died and then the ballot was mailed, we will certainly look closely at those and gather the appropriate information and refer them to the law enforcement,” Wlaschin said.

Through a review of alleged evidence of voter fraud brought forward by the Nevada GOP, the secretary of state’s office found just 10 individuals who were deceased at the time of the election and had a questionable voting history. Those cases were referred to law enforcement for investigation.

That post-election audit can also uncover situations in which a voter may have passed away days after casting their vote, meaning their ballot would have been legitimately cast. In an election with high turnout, that situation could apply to as many as several hundred individuals, Wlaschin said.

What other safeguards are in place?

Aside from daily checks for deceased voters, state election officials also perform annual and pre-election checks to ensure that no potential registration cancellations are missed.

The secretary of state’s office and Office of Vital Statistics have a contract that calls for an “annual reconciliation” between the state’s voter registration list and the list of all individuals who died in the previous year to ensure that all those who passed are appropriately removed.

A similar check happens up to 120 days before every statewide election, using information on deceased Nevadans from the previous year and the current year-to-date list.

Inactive voters, such as someone who may have died and not voted in multiple years, are also systematically removed. If a county clerk mails a voter a written notice and the voter does not respond, then the clerk may cancel the registration of that voter, if that person does not vote for two general elections after the notice was sent.

Voters themselves also help with maintenance of the list. Anyone who moves can notify the state and county through the post office or a clerk’s office, and election officials will be able to more quickly change or cancel that voter’s registration.

The state also receives reports every other month from the Electronic Registration Information Center (ERIC), a nonprofit consortium that allows Nevada to compare voter registration data with more than 30 other states. Wlaschin noted ERIC has access to information from the federal Social Security Administration’s death files, allowing states to receive information about deceased voters in another way.

Nevada additionally acts on reports it receives through the National Change of Address (NCOA) process, under which people notify the Postal Service if they move to a new address. This data can be used to update a registered voter’s address, along with confirming the voter’s move through a postcard notification.

What is being done to improve the process?

Wlaschin said the secretary of state’s office is continuing to improve its communication with the Office of Vital Statistics, as well as increase his own agency’s understanding of the process to ensure that the state’s voter rolls are as clean as possible.

He also mentioned “building additional redundancies” in the process to ensure there are “multiple opportunities to make sure that an individual has been properly removed from our statewide voter registration list.”

The state is also set to have a new state-led, top-down voter registration system in place by 2024 (or potentially 2026), which will reduce the number of steps in the process for removing deceased voters from the rolls, and better allow the state to ensure the list of registered voters is as accurate as possible.

What can you do?

Individuals can help expedite the process of removing deceased voters. If voters receive a piece of election mail — such as a sample ballot, election ballot or voter notification postcard intended for someone else — they can write “return to sender” on that mail and indicate that the deceased individual (or even a previous tenant) is no longer living at that address.

That will help the county election officials start the inactivation process for canceling the given voter’s registration.

Wlaschin emphasized that people should return that mail, rather than throwing it away, as doing so prevents election officials from knowing that the individual is no longer at their listed address. He added that people can directly notify their county clerks if they have a deceased family member who was a registered voter.

“If a family member is interested in having their loved one’s information removed, and they have that death certificate in hand, it is possible for them to bring that to a county election official to in some cases expedite that process,” he said.