Laxalt gets a boost from longtime friend, former roommate DeSantis 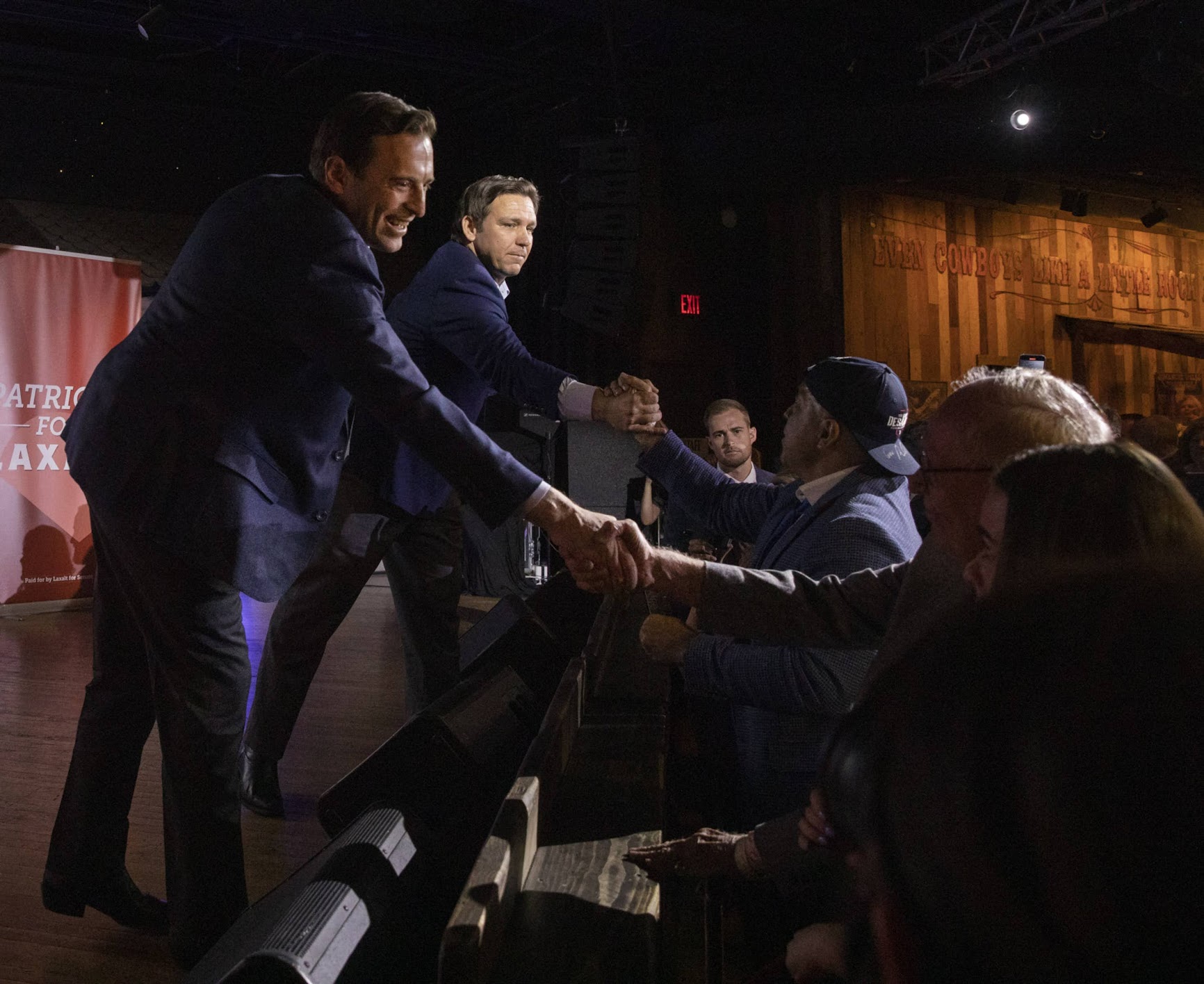 Dubbed the “Rise Up” rally, Wednesday’s event took clear aim at the culture war, rousing the crowd of more than 1,000 people with not only attacks on Democratic economic, energy and immigration policies, but also “woke” culture and the “radical left.”

It also gave DeSantis, the event’s headliner and a potential candidate for president in 2024, a platform from which he spent roughly 20 minutes praising his tenure and achievements in Florida before touting Laxalt’s bid.

“Greetings from the Sunshine State, the freedom state, and the state that has done more than any other state to stand up to Joe Biden,” DeSantis said.

Sharing the stage with Laxalt at Stoney’s Rockin’ Country — a country-themed bar and club replete with a disco ball above the crowd— DeSantis ran through a laundry list of accomplishments under his tenure as governor, from limiting COVID restrictions in the early phase of the pandemic to running a budget surplus to enacting voter ID laws and banning critical race theory in school curriculums.

“If Florida had not led over the last few years, other states would not have followed,” DeSantis said of limiting COVID mitigation regulations, including mask and vaccine mandates. “Biden would have won, and this state, this country would look like Canada or Australia. Freedom prevailed over Fauci-ism”

Laxalt similarly targeted the “radical left” and the “policies that are crushing our state and our country,” attacking attempts by Democrats to curtail the use of fossil fuels and their move away from Trump-era policies on the U.S.-Mexico border.

He also touted “wins on the board” by conservatives, from the failure of the CNN+ streaming platform — “clearly Americans were not willing to pay for that,” he said — to the pending sale of Twitter to billionaire Tesla CEO Elon Musk.

“These are all examples of us being on the march, because people are ready to rise up, and we’re going to take back our country and our state,” Laxalt said.

In attacking Cortez Masto over the issue of crime and her relationship with police departments as a former attorney general, Laxalt also announced the endorsement of the Public Safety Alliance of Nevada — a group composed of police unions — which previously backed Cortez Masto in 2016.

A spokesman for Cortez Masto’s campaign responded to the endorsement late Wednesday, saying in a statement to The Nevada Independent that Cortez Masto “has always stood with Nevada law enforcement.”

Her response also criticized Laxalt’s failure to disclose to the state bar association a juvenile assault arrest involving a police officer from 1996.

This week, Cortez Masto hit back, aiming at Laxalt and DeSantis through digital ads. In a full-page splash across the Las Vegas-Review Journal website, the ad called the pair “anti-choice,” pointing specifically to a ban on abortions past 15 weeks with no exception for rape or incest signed by DeSantis earlier this month.

And opposite Laxalt, Republican challenger Sam Brown launched a third television ad Wednesday, this time featuring a testimonial from his wife.

Though Laxalt has led fundraising among all Republicans through the first three quarters of the primary, he has not done so by substantial margins. In the first quarter of 2022, Laxalt outraised Brown by roughly $500,000, as Brown posted his third quarter of more than $1 million raised in a row.

Both Republicans have been vastly outraised by Cortez Masto, who has banked record-breaking amounts even as she has dipped into the low-40s in a handful of recent polls.

From roommates to Republican leaders

DeSantis has a long history with Laxalt. The pair were roommates during their days at the Naval Justice School, and both spent time in the Navy Judge Advocate General’s (JAG) Corps in the mid-2000s. Before they entered politics, they co-wrote a letter to the editor of the American Spectator in 2011 slamming the Affordable Care Act.

Today, they remain friends who speak “with regularity,” according to court testimony Laxalt gave in the 2021 trial of Lev Parnas, who was convicted last October on federal campaign finance charges. Parnas and his business partner, Igor Fruman — both allies of Trump lawyer Rudy Giuliani — funneled money to a number of Republican campaigns in 2018, including both Laxalt’s and DeSantis’.

That friendship has continued to emerge on the campaign trail. In October of last year, Laxalt praised DeSantis at a campaign stop in Elko for “standing up” to media, bureaucrats and Anthony Fauci, President Joe Biden’s chief medical adviser, in defying early COVID shutdowns and mitigation efforts, especially mask mandates.

DeSantis, meanwhile, planned to attend (and ultimately delivered a pre-recorded message at) last year’s Basque Fry, a barbecue fundraiser that is a staple of the Republican campaign circuit in Nevada, and later stumped for Laxalt at a Palm Beach, Florida fundraiser last December.

Since their days in the Naval Justice School, the pair have ridden paths in near-parallel. As Laxalt won a narrow victory to the Nevada attorney general’s office in 2014, he did so just two years after DeSantis was elected to the U.S. House by a wide margin in his native Florida.

In 2018, the two mounted bids for governor of their respective states as ardent conservatives in the mold of then-President Donald Trump — though DeSantis faced a tougher primary challenge against Agriculture Commissioner Adam Putnam, while Laxalt easily sailed to victory in the primary. In both races, Laxalt and DeSantis saw financial support from similar parts of the GOP campaign machine, including a boost in both races from issue ads paid for from the same dark-money PAC.

But where Laxalt ultimately lost in the general — DeSantis won.

DeSantis has since rapidly risen to become the Republican Party’s shining star, a conservative firebrand who has taken hold of a national profile as he has entered center stage in the culture war.

Under his governorship, the Florida Legislature enacted a ban on “critical race theory” in public schools, targeting material that might “distort historical events.” DeSantis has personally described the measures as aimed at delivering students “facts,” rather than seeking to “indoctrinate them with ideology.”

DeSantis has also been at the forefront of efforts to enact the Parental Rights in Education bill, dubbed the “Don’t Say Gay” law by critics, which bars instruction of sexual orientation or gender identity before through the third grade under the auspices of leaving such issues to parents, rather than teachers.

However, critics of the measure have argued it targets and marginalizes LGBTQ+ teachers and individuals at large. Those critics have also raised concerns that the rhetoric surrounding the measure and copycat bills in other conservative-led states — especially accusations of “grooming” toward LGBTQ+ teachers— have set the stage for a broader attack on gains made on LGBTQ+ rights made in the last decade.

Nonetheless, the public battle with critics over the bill has led to yet more acclaim for DeSantis among conservatives, especially as he moved to undo special concessions for the Disney corporation after it ultimately pushed for the Florida government to undo the “Don’t Say Gay” measure. His public fight with one of the biggest media corporations in the world has since spurred record-breaking fundraising numbers.

Laxalt — who argued in 2010 against allowing openly gay individuals into the military — has praised DeSantis over the measure. Speaking recently on a podcast from the right-wing outlet Breitbart, Laxalt accused opponents of protecting “indoctrination” of young children, and lauded DeSantis for being “one of the only governors, certainly in modern history, to stand up to the woke left.”

LGBTQ+ activist groups sought to attack Laxalt for those positions at a Las Vegas press conference earlier this month, an attack he dismissed as “activist media groupthink.”

Correction: 4/28/22 at 11:35 a.m. - An earlier version of this article misidentified Laxalt and DeSantis as law school roommates; They were, in fact, roommates during naval officer training at the Naval Justice School.

Update: 4/28/22 at 11:46 a.m. - This story was updated to include information on endorsements of Cortez Masto by several law enforcement groups on Thursday.