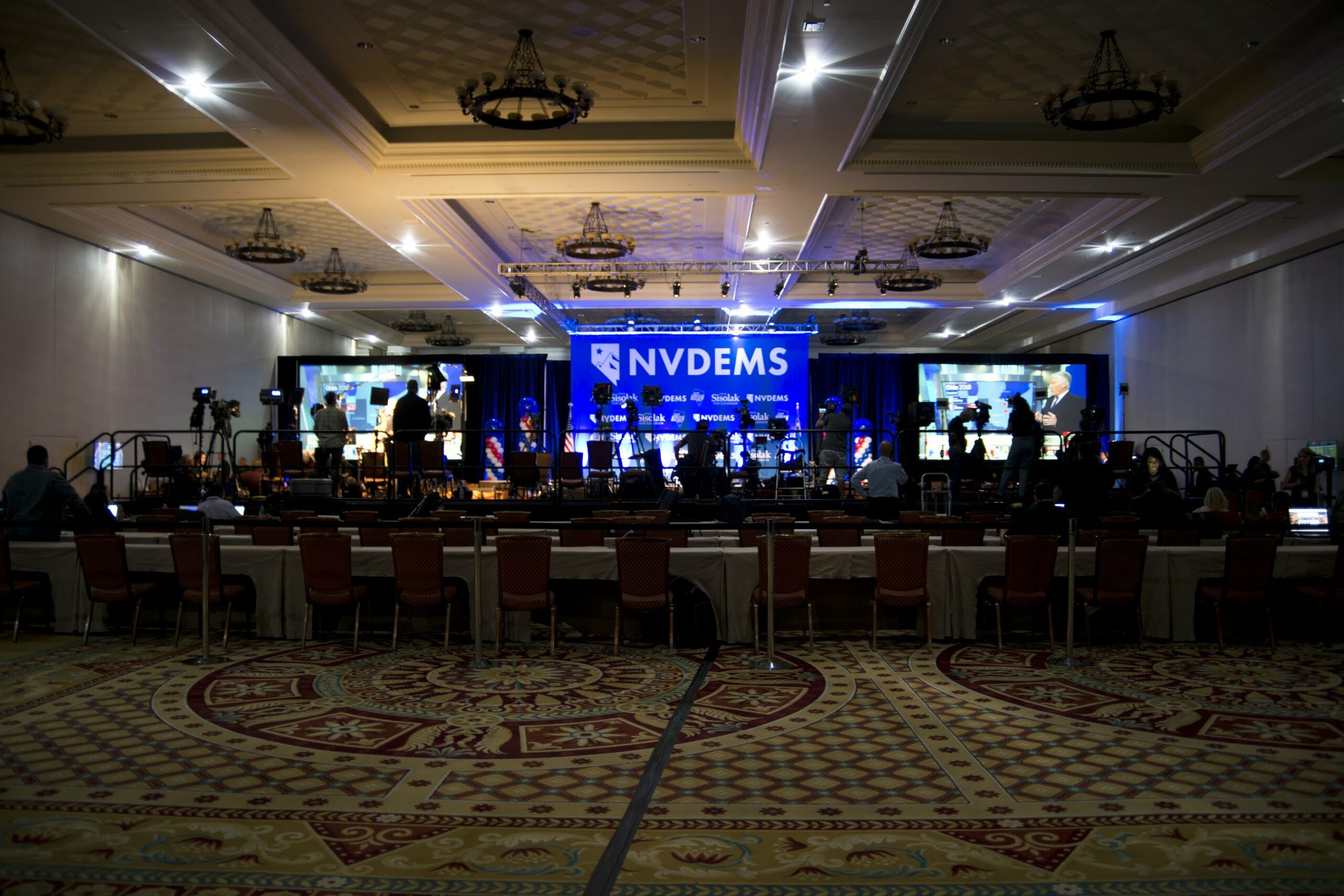 With four days until the first in the West caucus, the Nevada State Democratic Party is finally debuted a live, hands-on version of a new iPad-based calculator tool that precinct chairs will use to fold in the results of early voting on Caucus Day.

The calculator, which The Nevada Independent was able briefly test Tuesday night, is an off-the-shelf Google Form with spaces for the precinct chair to input the number of in-person caucusgoers and those caucusgoers’ preferences linked with spreadsheets that reveal how early caucusgoers from that precinct voted. According to a party official, campaigns were given a live demonstration of the tool, and volunteers began receiving hands-on training on the calculator on Tuesday.

The slides from volunteer trainings further detail how the calculator is supposed to function, which is largely in line with what the party had already released publicly. In general, the calculator will work in conjunction with a caucus math poster to calculate and record the results of the caucus.

According to a party official, the calculator for each precinct is actually multiple Google Forms linked by Google Sheets. For instance, the precinct chair will submit the number of in-person caucusgoers on one form, which will then direct them to a spreadsheet where they can view how many caucusgoers from that precinct early voted and calculate the viability threshold. That spreadsheet will then contain a hyperlink taking them to another Google Form where they can input the results from the first alignment, and so on.

One aide to a Democratic campaign in Nevada, speaking on condition of anonymity to speak frankly about the caucus process, said that the campaign was “surprisingly impressed” by the demonstration they got from the party.

“They walked us through a mock caucus where we put in numbers, and it spit back results,” the aide said. “It seems to work and they definitely ran it through a couple of different scenarios for caucus math, and it all went well.”

The aide added that the calculator seems simple enough that “anybody that feels confident enough to run a caucus that will be able to use it.”

An operative on another Democratic presidential campaign reported feeling "encouraged."

"Kudos to the party because, obviously, that is not what we thought was going to happen," the operative said. "Now comes the human error aspect to it all which, I think, is really hard to know."

The slides obtained by the Independent also underscore the redundancies the party has built into the caucus process, which it entirely re-designed in the wake of Iowa’s problem-plagued contest earlier this month. Nevada Democrats had planned to use two apps designed by the same company responsible for developing the reporting app used in Iowa, which suffered from a coding error and contributed to the party delaying the release of final results for three days.

Volunteers will be asked to first calculate all of the caucus math by hand — for instance, using a formula to establish the viability threshold, or the minimum number of supporters a candidate needs to have in order to qualify to receive delegates out of the caucus — and then use the caucus calculator to verify their results. The calculator will also import the early voting data to calculate how many caucusgoers support each candidate and ultimately determine the number of delegates that should be awarded, though precinct chairs will also be asked to total those numbers by hand.

The calculator will also be used to submit the results of the caucus to the party, though precinct chairs are all required to call in their results as the primary reporting method. Precinct chairs may also text a picture of the finalized caucus reporting sheet to the party as an additional verification step, and site leads, who coordinate the caucuses at multiple precincts at their location, will also be asked to take pictures of all final results sheets for their site on one iPad at the end of the caucus.

Should the calculator not work on the day of the caucus, the party plans to provide the results of early voting in a sealed envelope to each precinct before the caucus begins. Precinct chairs will not receive actual copies of early caucusgoers' ballots, but rather a representation of their presidential preferences on a sheet of paper. They'll be required to manually realign early caucusgoers by circling their next highest-ranked viable choice if their first-choice candidate is not viable.

Volunteers will be given a supplemental worksheet that explains how to carry out the process of manually realigning early caucusgoers. Voters' names will not be included on the paper copy of the early voting results.

The party has not yet been able to provide further details about how it will ensure that early voters’ data makes it back to their home precinct to be counted on Caucus Day. Early caucusgoers marked their presidential preferences on a Scantron-like scannable ballots, but volunteers will need to hand-process paper forms containing early voters’ secretary of state ID numbers in order to ensure that those ballots get matched up with their correct home precinct, and also ensure that no caucusgoer attempts to vote twice.

One of the slides, titled “iPad setup,” includes specific instructions for unlocking the iPad — “open iPad case, hold iPad horizontally” and “press the small round ‘home’ button on the side of the screen twice” to “bring you to your iPad home screen.”

The trainings also rehash other details of the caucus process, including, for instance, how to check in caucusgoers. On the day of the caucus, volunteers will check caucusgoers in on a paper voter roll at each precinct — not an iPad-based voter roll as they have been for early voting — and cross-reference a list of early voters for the precinct to ensure the individual only participates once. Volunteers will then put a voter PIN sticker, like the ones used for early voting, on the voter roll and have the individual initial next to their name, and place a corresponding sticker on the caucusgoers’ presidential preference card.

If they are not already a registered as a Democrat, caucusgoers will be asked to fill out a voter registration form to make sure that it is filled out completely and sign in on a paper sign-in sheet instead of the voter roll.