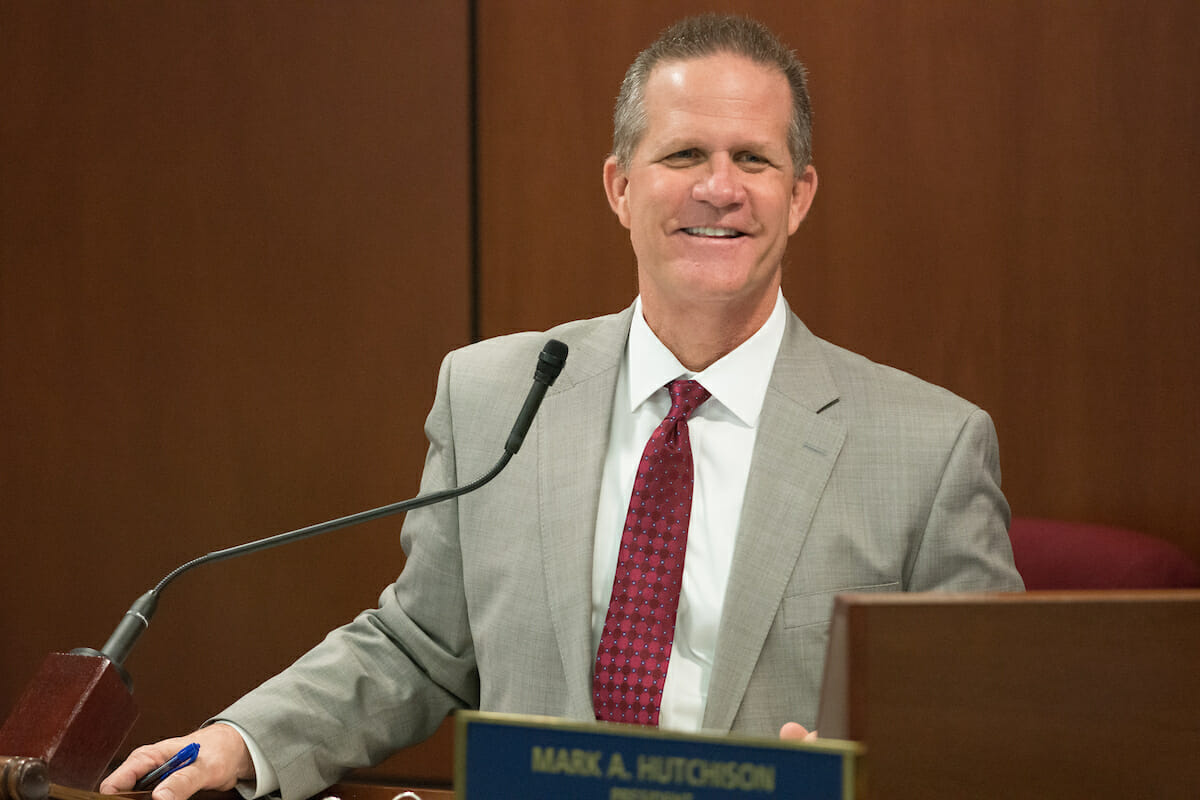 Republican Lt. Gov. Mark Hutchison made it official on Friday that he won’t seek re-election in 2018, bringing more clarity in the race for Nevada’s second highest executive branch position.

Hutchison, who declined in January to launch a gubernatorial bid, said in a press release Friday that he wouldn’t run again for the part-time position but added that “in the coming days I will announce what is next and how I plan to continue to contribute to our great state.”

“I’m blessed with a large and growing family, which is deserving of more of my time and attention, as well as a large and growing law firm,” said Hutchison, who’s a founding partner in the large private law firm Hutchison & Steffen. “I thank my outstanding staff members and the many state employees who have dedicated themselves to improving this state.  I also wish to thank Governor Sandoval who recruited me for this honor and set an example of integrity and leadership. And most importantly, I thank my fellow Nevadans who elected me and entrusted me with this office.

Hutchison, who represented Nevada pro bono in a federal lawsuit against Obamacare before serving two years in the state Senate, defeated then-Democratic Assemblywoman Lucy Flores by a 59 to 34 margin in the 2014 election. In his capacity as lieutenant governor, he serves as the mostly symbolic head of the state Senate, and chairs the Nevada Commission on Tourism and a task force charged with studying the best ways to restructure Nevada’s energy market.

Gov. Brian Sandoval thanked him for his work in the role, calling him a friend and a valuable partner.

"Lieutenant Governor Hutchison is a true public servant who made personal sacrifices in order to serve because he knew he had something to offer the people of Nevada," Sandoval said in a statement. "We are a stronger state because of his time in office and I look forward to seeing what he accomplishes next in his career ... Although I understand why he is not pursuing another term, I truly hope that he will continue to serve his community and the state he loves."

In a statement provided to the Las Vegas Review-Journal shortly after the announcement, Roberson praised Hutchison and lent his support, without revealing any of his future plans.

“You would be hard pressed to find a more energetic, substantive and thoughtful public servant than Mark Hutchison,” Roberson said. “Mark has a deep passion for serving the people of Nevada — both when he served in our state senate and as Lieutenant Governor. Most importantly, Mark is a wonderful and devoted family man and I am proud to call him a friend. I have great respect and admiration for Mark and I will continue to support him in whatever the next chapter has in store for him.”

Roberson said earlier this month that he doesn’t plan to run for Congress or re-election in 2018, and declined to comment on his future plans.

Anticipating his entry into the fray, the Nevada State Democratic Party made a preemptive strike against him, noting Roberson's loss to Danny Tarkanian in a 2016 congressional primary.

"Over and over again, Tom DeLay protégé Michael Roberson has done his best to bring distasteful Washington-style political games to Carson City, and it's clear that his one and only priority is furthering his own political ambitions," said party spokesman Stewart Boss. "Senator Roberson isn't running to serve Nevadans -- he just wants to be Adam Laxalt's water boy. If he can avoid losing another Republican primary, Democrats will beat Senator Roberson in the general election."

No Democrats have declared for the race, though a handful of potential candidates have begun to emerge. Former Secretary of State Ross Miller, who lost a heated attorney general race to Laxalt in 2014, confirmed to the Review-Journal that he’s been approached to run for the seat but hasn’t made a decision about jumping in.

“I've spent the last six months discussing a potential run for Lieutenant Governor with my family, donors, party leaders and other potential supporters,” he said in a statement. “The Lieutenant Governor's office could and should be a source of bipartisan long-term economic innovation and expansion. I want to leverage my skills to serve Nevada and will continue to explore every opportunity to do so.”

This story was updated at 5:45 p.m. on Aug. 18, 2017 to add comment from the Nevada State Democratic Party and Gov. Brian Sandoval.