No, our Southwest Legislature will not be traveling by train anytime soon 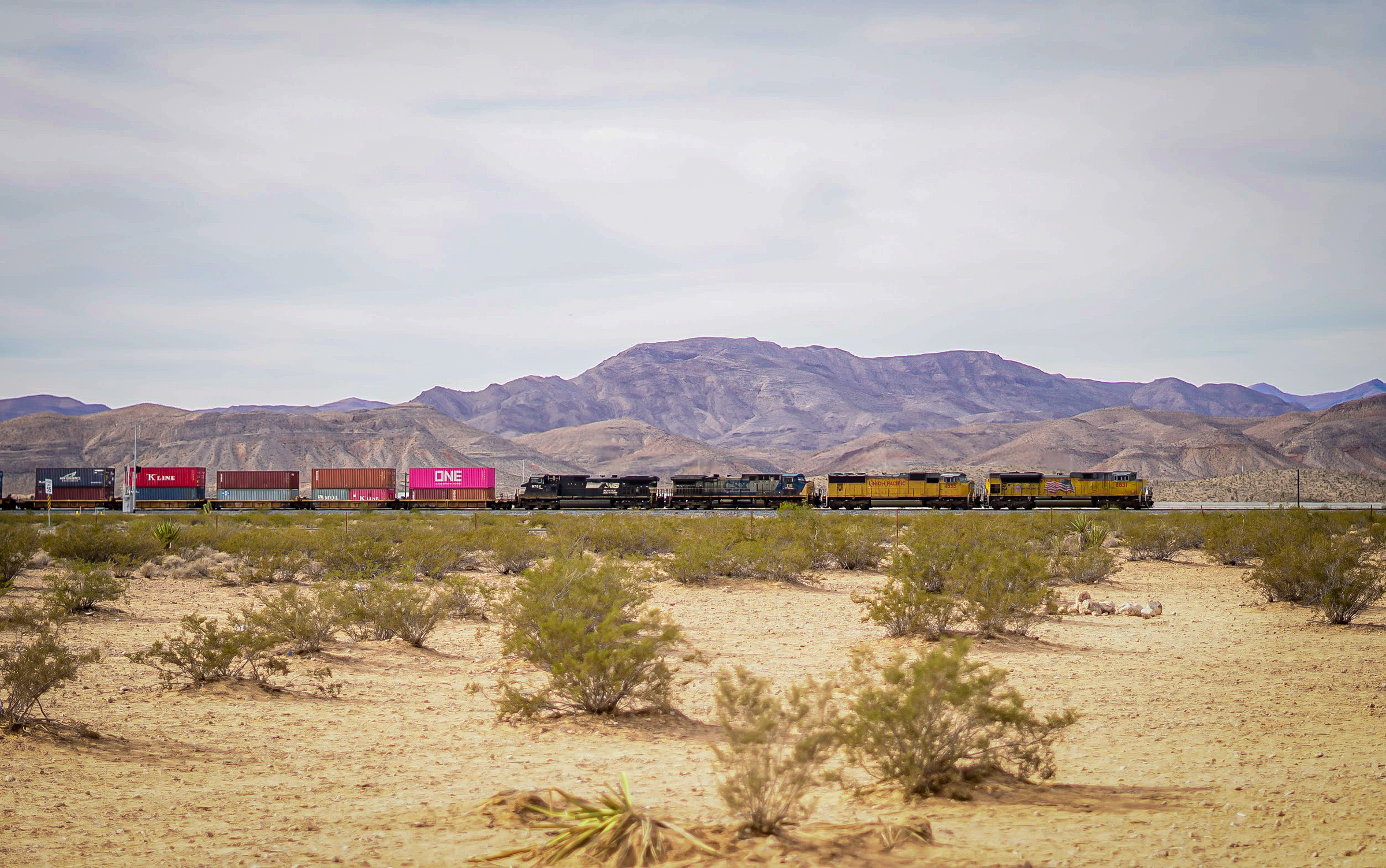 This is not a repeat of last week’s column. You are not experiencing déjà vu. Southwest Airlines canceled hundreds of flights — again.

To be fair to the beleaguered airline, California is experiencing wave after wave of atmospheric river-driven storms. These are unsurprisingly making travel of any kind, regardless of the mode chosen, rather complicated over there right now. A bit of that storm energy also escaped to the dry side of the Sierras, which left a bit of a snowy mess that disconnected power to tens of thousands of households — some for several days.

To the credit of Nevada’s unofficial regional airline, Southwest did eventually get its planes off the ground. There are still a few hundred NV Energy customers (at a minimum) who would probably appreciate it if their power meters similarly took flight right now.

I come not, however, to condemn two of Nevada’s least popular corporations, but instead to bury an oft-discussed alternative — a high-speed train between Reno (or Carson City) and Las Vegas.

Don’t get me wrong, I understand the appeal. I’ve driven and flown the nearly 450 miles from Reno to Las Vegas and back on several occasions and, quite frankly, even the best trips tend to be at least a little miserable.

On the one hand, if you’re feeling miserly (especially if you’re traveling with a group), you face driving for at least seven hours through some of Nevada’s driest deserts, with the monotony only punctuated by the periodic anxiety of having to pass a semi-truck or recreational vehicle by driving in the same lane as oncoming traffic. On the other hand, you can deal with airport security (TSA PreCheck really does help), sit in a terminal, get on a plane, wait half an hour to taxi, fly for a bit over an hour, land, then wait another half an hour to taxi and deplane.

Neither approach, speaking from repeated experience, leaves you with the sense that you’ve used your time wisely.

Those aren’t the only two options, though. For the sake of completeness, you can also take a bus — Greyhound has one-way rates starting at around $70. That, however, is more than I pay in gas to drive myself (my compact car is admittedly optimized somewhat for fuel efficiency) and is less than $30 cheaper than most Southwest flights.

The significant difference between fuel prices and travel ticket prices might suggest that there’s some money to be had in providing cheaper transportation service. After all, if a family of four can make the trip for under $200 in gas money thrown into the maw of the least fuel efficient sport utility vehicle imaginable, why does it cost at least $280 for a bus driver (or closer to $400 for to make the same trip?

The answer is transportation companies have to factor in all of the costs of each trip — not just the gas, but also the driver’s or pilot’s time, as well as the wear and tear on the vehicle carrying the passengers. Additionally, the vehicle itself has to be partially paid for by the trip as well. These are all costs families don’t have to directly consider when traveling in their personal vehicles because they’re sunk costs the family would likely incur whether they were traveling between Nevada’s two largest metropolitan areas or not.

Consequently, it’s fundamentally impossible for any transportation company to beat the family vehicle on price alone, at least at the point of ticket purchase. Instead, transportation companies compete on convenience and speed — even a bus lets you browse the internet or read a book while you make the trip instead of having to keep your hands at 10 and 2 while you micromanage your cruise control. That said, ticket prices must still remain close enough to what a traveler might pay to drive their personal vehicle to make the tradeoff worth it — otherwise, the traveler will simply sigh, top off their tank, and go for a long, monotonous drive.

The good news, at least if you’re a transportation company, is car travel can be quite inconvenient. Auto accidents, along with the attendant delays to those stuck behind them, are fairly common, especially during inclement weather, and add undesirable unpredictability to travel schedules. Navigating through traffic can also get quite taxing and involved. Put the two together and you get an explanation for why some people pay a little extra and leave their car at home.

The bad news, however, is that though it’s undeniably frustrating to have to sit behind a semi truck all the way around the western edge of Walker Lake — where there isn’t a single passing lane and the speed limit is unjustly reduced to 60 miles per hour despite my repeated petitions for redress, each of which were carefully scrivened with my finest wax pastel upon my palest vellum [after his last drive to Southern Nevada, our author wrote a series of increasingly illegible profanities in crayon on a pile of gin-stained cocktail napkins, then threw them in the trash - Ed.] — there actually aren’t that many people making the trip between Reno and Las Vegas. According to the Nevada Department of Transportation’s Traffic Records Information Access application, the Annual Average Daily Traffic for U.S Highway 95 between Mina and Luning — two small towns in Mineral County which generate little traffic on their own — was only 3,800 vehicles in 2021.

To put that volume of traffic into perspective, the Regional Transportation Commission of Washoe County won’t discuss adding a bus stop unless a street experiences at least 5,000 average daily trips. If the traffic between Reno and Las Vegas wouldn’t even justify discussing the installation of a bus stop in Reno, it’s pretty safe to say that it’d be virtually impossible to justify building dedicated high-speed rail between the two cities.

That conclusion, however, can be analytically confirmed without much difficulty.

According to California’s most recent Proposition 1A funding plan, the Central Valley Segment of the California High-Speed Rail project is 119 miles long and is expected to cost $13.9 billion to build — that works out to just under $117 million per constructed mile. For the sake of argument, however, let’s assume Nevada’s construction costs would be a bit lower — say, $100 million per mile. Let’s further assume, for the sake of argument, that a high speed rail project between Reno and Las Vegas would need 400 miles of track — that’s roughly halfway between the 350 miles of air distance and 440 miles of car distance between the two cities. Consequently, it would cost, more or less, roughly $40 billion to build high speed rail between Reno and Las Vegas.

That sounds like a lot of money (because $40 billion is, in fact, a lot of money), but that level of investment might be worthwhile if there would be enough ridership to support the project.

For the sake of argument, let’s go ahead and assume a high speed rail project could attract all of those travelers. If it successfully did so, to pay for the high speed rail project in 10 years, assuming no further maintenance costs or expenses (we’re assuming we don’t need to pay the train conductor or anyone else to run this train, in other words), each traveler would have to pay $1,095 for their train ticket — at least five times what any airline charges to fly between Reno and Las Vegas. If the project failed to attract every traveler (perhaps because it cost far more than any airplane, bus, or passenger vehicle), the cost per ticket would be even higher.

Even if we make the most utopian, pollyanna-ish assumptions conceivable, there’s no way a high speed rail project between Reno and Las Vegas could pay for its initial construction, much less its ongoing operation. Any such project would have to be deeply subsidized — far more so than air and auto travel already is.

That, incidentally, might explain why neither Nevada Rail Coalition nor the Department of Transportation’s Nevada State Rail Plan spend much time and energy pitching passenger rail at any speed between Reno and Las Vegas — there simply aren’t enough of us making the trip to make the discussion worthwhile. Instead, their proposed passenger rail projects, like the Sierra Club Passenger Rail Proposal for Northern Nevada, focus on regional light rail, which is both far less expensive to build and operate than long-distance high speed rail, and also more likely to serve higher traffic transportation corridors, like the 42,500 vehicles that travel between Sparks and the Tahoe Regional Industrial Center each day — that’s more than ten times the number of vehicles traveling between Reno and Las Vegas. Clark County — where an overwhelming majority of our state’s residents live, and which has roughly the same population as the population served by Utah’s TRAX light rail system — would also be an obvious target for a light rail project.

None of this is to say that a train between Reno and Las Vegas will never be built, or that such a train can’t improve traffic conditions on the highway between the two cities — it’s just more likely to be a freight train than a passenger train.

The logistical economy of Nevada has changed substantially since train service between the two cities was terminated over a century ago — Reno and Las Vegas have both since developed advanced distribution infrastructure and Nevada’s mining industry has become far more productive. Put the two together and the business case for freight rail is considerably more attractive than it was when the Las Vegas and Tonopah Railroad ceased operations after World War I. Since each freight rail car can haul as much as three or four semi trucks, building freight rail between Reno and Las Vegas could significantly reduce the amount of slow-moving traffic on the two-lane highway, thus decreasing travel time and improving safety by decreasing the need for high speed passing into opposing traffic.

Until someone reinstalls train tracks on those century-old rights of way, however — and recognizing that the travel needs of roughly 10,000 people each day pales in comparison to the travel needs of the hundreds of thousands of commuters traveling to work in both of our state’s largest metropolitan areas — we’re all going to have to accept that traveling between Nevada’s two largest metropolitan areas is always going to be a bit inconvenient.