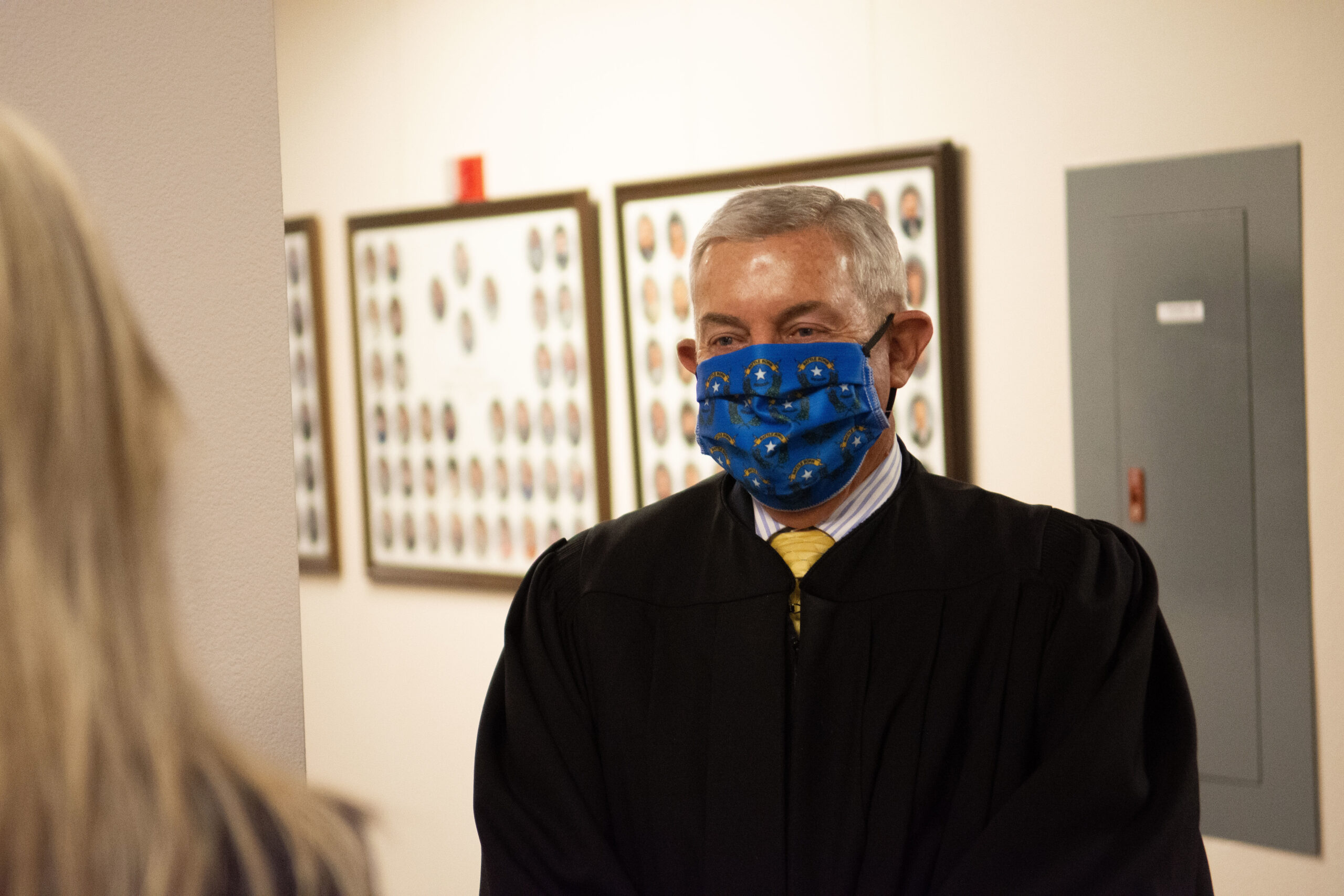 Just three years after the Nevada Supreme Court saw a record high backlog of unresolved cases in 2018, the state’s highest court has whittled down its to-do list to the lowest level in a decade.

But that decrease, detailed in the court’s 2021 annual report released earlier this month, is likely only temporary amid a buildup of unresolved district court-level cases delayed during COVID-19 pandemic, which threatens to bog down court proceedings as early as next year.

Nevada Supreme Court Chief Justice James Hardesty has been sounding the alarm bell on a possible “wave” of backlogged cases coming to the court for nearly a year, warning state lawmakers during the biannual State of the Judiciary Message in March that “the highest priority for the judicial system is to restart jury trials and begin to clear the growing backlog.”

Hardesty, who plans to retire at the end of his term in 2022, reiterated in an interview last week that district courts around the state were staring down a huge number of cases requiring jury trials or other proceedings difficult to manage amid social distancing requirements — many of which will likely be appealed and end up before the state Supreme Court.

Hardesty said in the Eighth Judicial District Court, which covers Clark County, the number of pending civil cases scheduled to go to a jury trial had jumped 61 percent during the pandemic, from 3,283 in March of 2020 to 5,291 by December 2021. Scheduled jury trials for criminal cases have similarly jumped from 1,144 to 1,321 between the start of the pandemic and now, and homicides have risen from 214 pending cases to 297 over that same time period.

That buildup is a concern for Hardesty and other members of the state Supreme Court because of Nevada’s universal right of appeal, meaning the court is required to consider appeals from murder convictions to driver’s license revocations and cannot act like the U.S. Supreme Court, picking and choosing which cases to hear.

Through the 2021 fiscal year that ended in June, the court’s backlog fell to 1,176 cases. That’s down from 1,688 pending cases at the same point in time last year (a 30.3 percent decrease) and down from the more than 2,000 unresolved cases reported at the end of the 2019 fiscal year.

To prepare for that likely wave of incoming cases, Hardesty said the court has instituted case management systems to clear out older pending cases, and changed systems to better screen and address writ proceedings (challenges to district court-level “interlocutory” decisions, or judgments that happen while other aspects of the case are still pending).

Another help comes in the form of the statewide intermediate Court of Appeals, approved by voters in 2014. The appeals court operates on a “push-down” model, where all cases are first screened by the Supreme Court and then transferred to the appellate court if warranted.

In the past, the seven-member Supreme Court has implemented other policies designed to cut down wait times between initial appeals and decisions. Justices split into a pair of three-member panels to dispose of cases more rapidly, and have more recently decided cases through orders, not written opinions (which are typically longer, more complex and end up setting legal precedent).

“I think the court is prepared to deal with the coming cases. And certainly, we put ourselves in a better position over the last year and a half to take on that caseload,” Hardesty said. “But my worry is getting the cases resolved in the district courts in the first instance.”

Hardesty said dealing with the buildup of district court cases will be an “all hands on deck” problem requiring “every innovation that we can think of.” He suggested potentially raising the dollar amount limit for the Short Trial Program, which allows certain civil cases with a lower amount of money at stake to be resolved on a faster track, and advancing settlement efforts through the use of senior judges.

Hardesty also noted that he had reached out to trial courts and limited jurisdiction courts across the state and developed a list of $25 million worth of priority needs that could be funded with federal American Rescue Plan dollars.

He said he submitted the list to the governor and various counties over summer, but so far had only received commitments of about $1 million in unspent federal CARES Act dollars.

The court also reported resolving 2,366 cases through the fiscal year, including 1,451 by the Supreme Court and 915 by the Court of Appeals. The vast majority (2,264) of so-called disposed cases came through often-simpler court orders, compared to just 94 issued opinions, which are typically longer and deal with more ambiguous or undefined areas of case law.

Pending cases include appeals that have been fully briefed and submitted to the court for decision, as well as any that have been submitted but have not completed the briefing process or other steps needed before justices can render a decision.

Of the court’s 1,176 pending cases at the end of the 2021 fiscal year, Hardesty said only about 200 of them were ready for judicial disposition and an order — the rest were either still being briefed, in a mandatory civil settlement conference program or dealing with other pending motions that don’t require a decision from justices.

Hardesty and other justices have credited the Court of Appeals with shouldering a substantial number of cases, which has given the Supreme Court additional time to deal with more complex or difficult appeals.

According to the 2021 annual report, the Court of Appeals received 797 cases in the 2021 fiscal year, cleared or disposed of 915 cases and ended the fiscal year with 130 pending cases. Nearly two-thirds of their cases dealt with post-conviction or criminal appeals, while those categories of case types only made up a third of the Supreme Court’s caseload.