On the Record: The policy positions of Republican attorney general candidate Wes Duncan 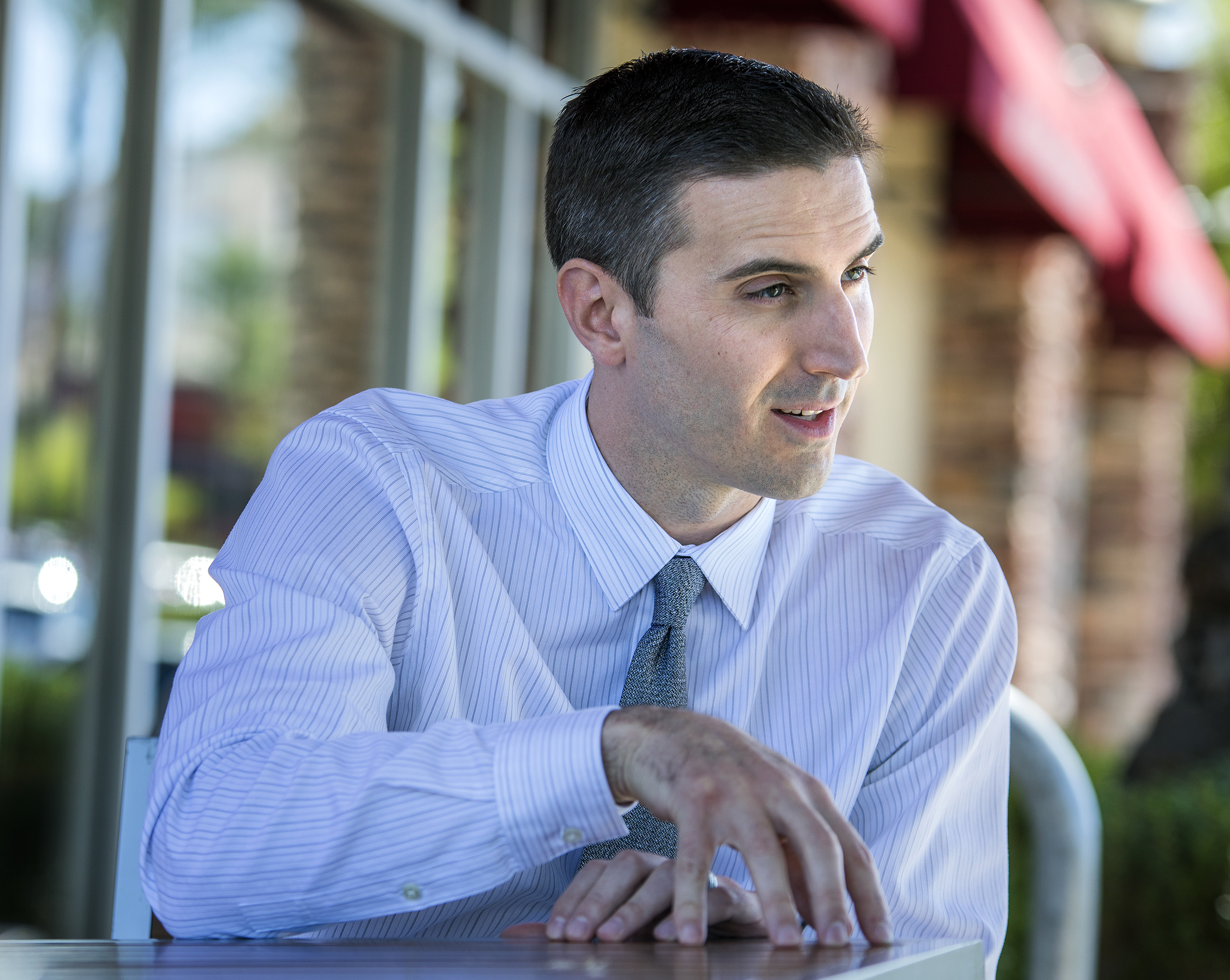 Now up: Republican Wes Duncan, an ex-Assemblyman and former top deputy in the Nevada Attorney General’s Office who announced a bid for attorney general in November, following news that Attorney General Adam Laxalt will seek the governor’s seat.

Duncan, who describes himself as pro-life, said the recent loss of a child helped shape his beliefs on the issue.

“My wife’s last pregnancy was actually a twin pregnancy and about halfway through her term, the doctor advised us that it was his opinion that one of the twins may have been experiencing some complications and asked if we wanted to 'selectively reduce,' i.e., abort our child,” Duncan wrote. “Being pro-life and believing in the power of modern medicine, we declined and continued with the pregnancy. On July 11, 2014, both of my sons, Charles and Miles, were born. Sadly, Little Miles Duncan passed away from complications 12 hours later. He died in my arms."

"However, my wife and I had the most beautiful 12 hours with him prior to his passing. We were able to hold, kiss, hug, read and sing to our little boy. Although he passed away and the pain was -- and still is -- unimaginable; I would never trade those hours for anything in the world. His life and death taught me about the frailty, beauty and dignity of every human life.”

The issue is now moot after the Nevada Supreme Court ruled a program such as an Education Savings Account doesn’t violate the “sectarian” provision.

“I was in the Attorney General’s Office when the ESA litigation was active and making its way to the Nevada Supreme Court,” Duncan wrote. “I support ESAs and having school choice to allow parents to be able to send their kids to the school that best fits their children’s needs.”

As an Assembly member, Duncan sponsored a bill that would allow businesses a tax credit if they donated money to an organization that offers scholarships for use at private schools. The concept didn’t go anywhere that session, when Democrats controlled both chambers, but came to pass two years later as the Opportunity Scholarship program.

Duncan sponsored a bill in 2013, along with other Republicans, that would have imposed a five-day deadline for agencies to notify the Central Repository — the entity that keeps records used for gun background checks — about whether someone had been involuntarily committed to a mental institution or found incompetent for trial. Under the bill, background checks on private gun sales and transfers would be voluntary and someone couldn’t sue for the failure to perform such a check, but the state would pay for it to be performed.

Duncan voted against a stronger version of that bill, sponsored by then-Sen. Justin Jones and vetoed by Gov. Brian Sandoval, that would have made private-party checks mandatory and provided a penalty if they weren’t performed. That concept later became Question 1, a measure that narrowly passed a statewide vote in 2016 but has not been implemented and is the subject of an ongoing lawsuit.

He defended his former workplace, the Nevada Attorney General’s Office, against an avalanche of criticism for the stalled law.

“Until the Legislature changes Nevada’s point of contact status (a more comprehensive check using the state’s Central Repository), or the FBI agrees they will conduct the background checks, the state of Question 1 will likely remain the same,” he wrote. “Bottom line, the FBI told the state it will not conduct the checks and you cannot force the FBI to do so. You also cannot prosecute law abiding Nevadans for acts that are impossible to accomplish, i.e., conducting a check the FBI refuses to do.”

Duncan’s former boss, Laxalt, came under fire from immigration activists after signing on to a lawsuit challenging President Barack Obama’s expansion of the DACA program and proposal of the DAPA program, which proposed a path to legal status for DREAMers’ parents. Asked about the DACA program, he said he opposed setting immigration policy through executive order.

“I am appreciative of the contributions immigrants have made to our nation throughout our history and believe immigration policy should be made by Congress working together with the president as required by the Constitution—not by executive orders,” Duncan wrote. “I was encouraged to see the President working with Congress in a bipartisan fashion to try and solve problems as it relates to immigration.”

Duncan also staked a position against sanctuary city policies, in which state and local authorities refuse to perform certain immigration-related tasks (no Nevada municipalities describe themselves as such). Proponents of such policies say local entities shouldn’t be carrying out work that’s under the purview of the federal government, although the policies have become a potent campaign issue and opponents say they allow violent criminals to slip through the cracks.

“In terms of sanctuary cities, I do not believe a city or state should refuse to work with federal authorities when they have arrested a felon who is in the country illegally. I believe sanctuary cities make all citizens, immigrant or otherwise, less safe and will oppose efforts to make Nevada a sanctuary state.”

Duncan voted against a bill in 2013 that authorized the state to license medical marijuana establishments. The measure, which garnered the support of his now-boss, Republican Lt. Gov. Mark Hutchison, ultimately passed and allowed medical marijuana patients to buy cannabis at a storefront some 13 years after medical marijuana use and home grows were legalized.

As for questions about a potential crackdown on Nevada’s marijuana industry, Duncan said he had “no comment on possible future legal actions."

Duncan voted in favor of a bill that created a task force to study the issue of transferring federally managed lands to state control. All Republicans and some Democrats supported the study.

Duncan directed an initiative to test a backlog of sexual assault evidence kits that had not been processed through a lab. He was the public face of the measure, testifying about it to legislative committees, and was vice-chair of a working group on the initiative with Laxalt as chair.

During the 2017 legislative session, Duncan reached a compromise agreement with Assembly Democrats that would expand tracking efforts of the evidence kits and tighten up testing deadlines for agencies that receive the kits. The bill, AB97, passed unanimously out of both houses of the Legislature and marked a rare victory for the attorney general’s office, given that many of the other bills proposed by the office failed to even gain a hearing during the 120-day session where Democrats set the agenda.

The working group said 7,634 kits were in the backlog when work began; as of late January, 2,883 kits had been processed through the lab.

Duncan has championed the concept of candidates resigning their current elected office if they’re campaigning for another one but still have significant time left in their current term. He quit his job as first assistant attorney general and took a position in a private law firm shortly before announcing his candidacy for attorney general.

“I do not believe mid-term politicians should use the leverage of their current office to run for another higher office when they are mid-term,” Duncan said. “Nevadans deserve elected officials who are focused on the job they were elected for and are not just using their office to get to the next rung of the political ladder."

Such a law would cover Duncan’s opponent, Senate Majority Leader Aaron Ford, who was most recently elected to a four-year term in 2016 and will remain a state senator if he loses the attorney general’s race.

The attorney general’s office plays a key role in Nevada’s legal fight against the federal government restarting the Yucca Mountain nuclear waste repository. Laxalt and Sandoval have committed to aggressively fighting the proposal, and Duncan said he would continue the effort.

“I support the Yucca Mountain litigation and will work tirelessly to make sure that Nevada does not become a nuclear waste dump for the rest of America,” Duncan wrote.