On the Record: the policy stances of gubernatorial candidate Dan Schwartz 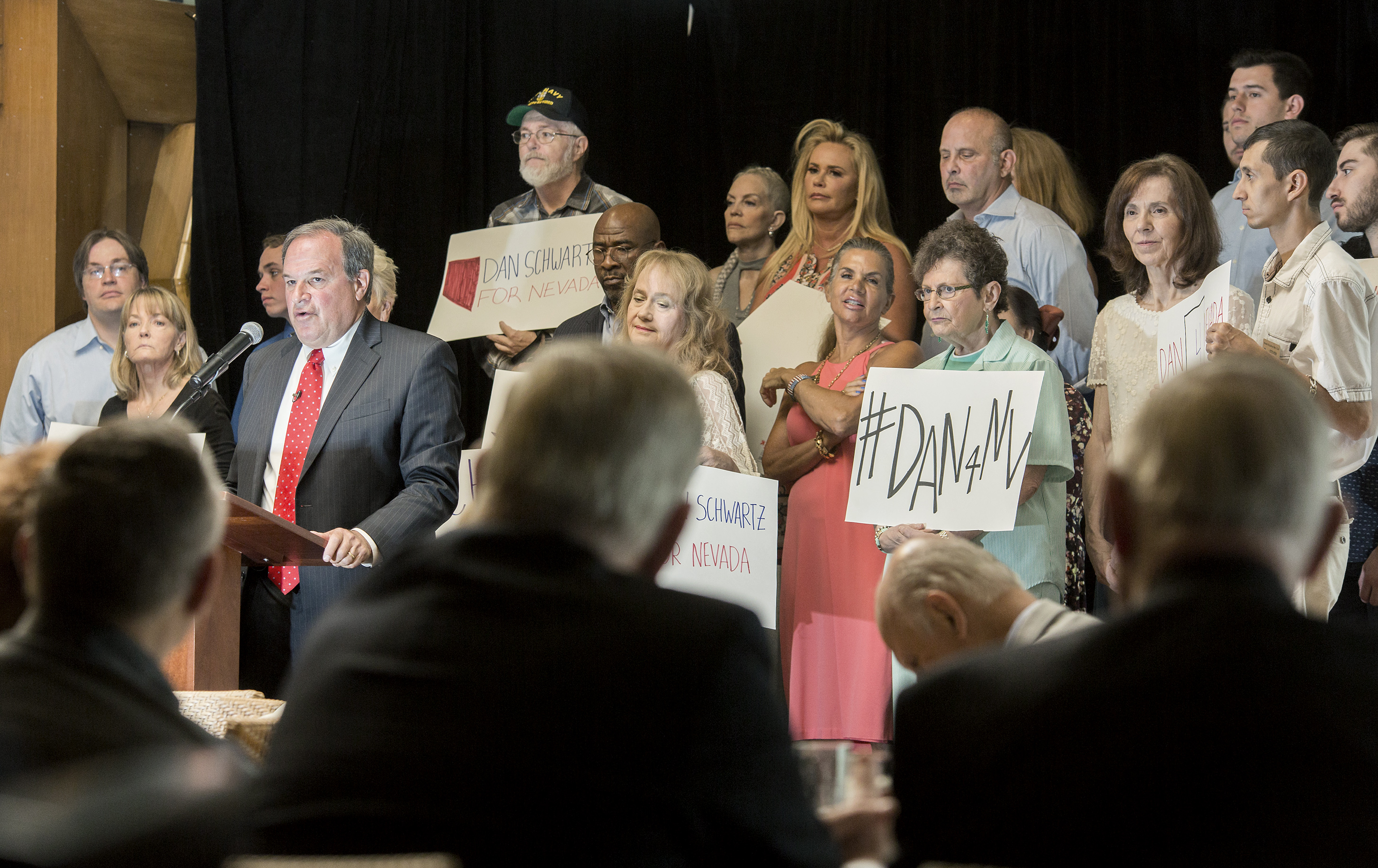 His blunt commentary doesn’t appear to be changing anytime soon, despite the Republican entering Nevada’s gubernatorial race. While announcing his candidacy Tuesday at a meeting of the Republican Men’s Club, Schwartz took aim at special-interest groups and the politicians they seemingly control, painting himself as a conservative who will speak truth to power.

“The for-sale sign in Carson City must come down,” he said. “We need new people, we need fresh ideas and we need integrity. We need a new way to build tomorrow’s Nevada.”

Speaking to reporters after his announcement, Schwartz questioned why the state doesn’t have a lottery, Education Savings Accounts or stricter regulation of payday loans. His assertion: powerful lobbyists who influence the state’s elected officials.

Schwartz has criticized his likely opponent, Republican Attorney General Adam Laxalt, for being in the pocket of Las Vegas Sands casino mogul Sheldon Adelson. The casino owner, his family and the Las Vegas Sands gave a total of $105,000 to Laxalt and his Morning in Nevada PAC when he ran a competitive race in 2014 against Democrat Ross Miller. But the Las Vegas Sands also gave more than $1.5 million that cycle to the Republican Attorney General’s Association — a group that spent an estimated $1.8 million on Laxalt’s race, mostly in negative ads against Miller.

That doesn’t necessarily mean Schwartz intends to make his disdain for power players and industries the central focus of his campaign against Laxalt.

“A lot’s going to depend on how he behaves,” Schwartz said, referring to Laxalt. “I’m happy to have a very issue-oriented campaign. I would prefer that.”

So where does Schwartz stand on a variety of Nevada issues? Here’s a look:

Schwartz opposed Gov. Brian Sandoval’s tax proposal in the 2015 session, instead offering up some other alternatives: a per-receipt tax on food and beverage, a gaming tax hike and a levy on passengers arriving at Nevada airports. None of the proposals went forward.

But he’s not going out of his way to support a Commerce Tax repeal proposed by Republican Controller Ron Knecht and state treasurer candidate Bob Beers.

He thinks the two need to have a plan to backfill whatever the state would lose without the Commerce Tax revenue.

Schwartz said he won’t sign Grover Norquist’s “no new taxes” pledge, explaining that he’s already on the record opposing higher taxes and adding that he couldn’t guarantee without a doubt that the state wouldn’t need to raise taxes.

“Let’s say I want to encourage building faculties at some of the universities. That to me is money well spent,” he said. “I’m going to look very aggressively at not raising taxes but if it becomes apparent that the people of this state will benefit greatly from increased revenues, then I will do that.”

But his campaign consultant Rory McShane noted that Schwartz had a good conversation with Norquist recently and spoke at one of the anti-tax hero’s Wednesday morning breakfast meetings.

After Schwartz announced his candidacy at a Nevada Republican Men’s Club luncheon, the first question he fielded was about income tax. Schwartz said he opposes both corporate and personal income taxes, describing them as unnecessary.

“If we need the money, there are certainly other sources,” he said.

That’s a shift from his previous position. Last August, he floated the idea of replacing the state’s Commerce Tax and modified business tax (payroll tax) with a corporate income tax, saying it was a more broad-based model and could capture revenue from shell companies.

"This state has to begin transitioning to a more stable revenue platform," he told The Nevada Appeal at the time.

Schwartz has been a champion for a program that allows parents to claim public school funding for private school tuition or other qualified educational expenses. The measure, passed by a Republican-led Legislature, was to be administered by the treasurer’s office.

But court challenges and then resistance in the Democrat-controlled 2017 session mean no funding has ever flowed to families. Schwartz laid out an ultimatum on funding the program.

“I will not sign any bill until I have an ESA bill on my desk,” he said. “Because we wrote the regs, and we know how much its costs, I think it has to be a minimum of $80 million, and that’s a biennium figure, and probably closer to $100 million. Those are minimums.”

How serious is he about that ultimatum?

“It could be a very quiet session, and the people of Nevada may be very angry with me, but I will make that clear up front because I need that bill,” he said.

Schwartz has been critical of the Governor’s Office of Economic Development, saying the state is giving away too much money in tax abatements.

He supports further investment in infrastructure — something that’s informed by his time living in Hong Kong. While he said he’s doubtful that the XPressWest train linking Las Vegas and Los Angeles will materialize, he supports a high-speed train between Las Vegas and Reno and thinks it can be done for $25 billion.

He also wants to see Nevada develop an indoor agriculture industry like the one in similarly dry Israel.

Schwartz led a charge to reform payday lending in the 2017 session, who used two of the five bill drafts allocated to the treasurer to propose changes to the system. They included the creation of a statewide database of high-interest loans and a mandatory “cooling off period” if a customer defaults on a loan.

The ideas came out of a series of roundtable discussions Schwartz convened in the months leading up to the session. But one of the bills, SB17, got a chilly reception from a legislative committee in a hearing and never moved forward.

Assembly Speaker Jason Frierson attempted to revive the database concept late in the session, but it, too, died.

In the end, the only payday lending reforms that passed were those proffered by Democratic Assemblyman Edgar Flores that put some additional restrictions on car title loans and created a definition for the ability to repay.

Schwartz called the creation of a statewide database for high-interest loans an “innocuous bill” that he was dismayed to see die during session. He plans to pursue more payday loan-related legislation if elected governor.

Schwartz was enthusiastic about efforts to transition to more renewable energy. In an interview on Sept. 4, he expressed support for a bill that Gov. Brian Sandoval vetoed that would push Nevada to use 80 percent renewable energy within a few decades.

“I’d love it. I think it’s a little optimistic,” he said. “I think at some point we have got to go to renewable energy, whether it’s wind, whether it’s solar.”

He suggested the government has a role in making that happen: “I think we have to encourage solar and wind.”

His campaign manager later clarified that Schwartz does not support energy mandates, which were a key element of the Renewable Portfolio Standard bill that was vetoed.

Schwartz said he’s open to discussing whether Yucca Mountain should be used as a nuclear waste repository, but believes Nevadans should have the final say.

He said the discussion over the project has become “an emotional issue and it’s not a rational issue.” He says the current opposition is driven by the casino industry’s aversion to having nuclear waste near the tourism corridor.

“It can be brought by train from the north. It doesn’t have to go anywhere near Vegas. This shows the difference when you have a politician who’s in the pocket of Sheldon Adelson. This shows one of the shortfalls,” he said.

He noted that other states are interested in storing the waste.

“If it turns out that the people of Nevada don’t want it, New Mexico is ready, able and willing to take it,” he said.

Schwartz said he believes the U.S. is a wealthy enough country that everybody should have health care and described it as an “economic right.” But he says the cost issue still needs to be worked out.

He thinks a good first step toward managing the costs would be to break the health-care system into two — one side that deals with minor issues such as cuts and scrapes, and another that deals with critical care such as cancer treatment.

He said he would support federal health-care money coming to Nevada in the form of a block grant, where the state could be flexible and design its own system.

He sympathized with beneficiaries of the Medicaid expansion.

“I think what Gov. Sandoval is concerned about, and I would share that concern, is there are something like 185,000 people who signed up for Medicaid expansion and I think what he doesn’t want to see is those people lose their insurance. And I would agree with him on that,” he said.

But he doesn’t support Obamacare’s individual mandate, requiring people to buy insurance or pay a penalty.

“I don’t like the individual mandate. I understand why it’s there, but I think there’s a better way to get people to have health care,” he said.

In an interview the day before the Trump Administration formally announced it would phase out the Deferred Action for Childhood Arrivals program (DACA), Schwartz said he felt for the plight of young immigrants brought to the country illegally as children.

“I’m sympathetic. I mean, who wouldn’t be sympathetic to some child who was brought here and who has lived here and made a life for themselves,” he said. “But I think the president has made a perfectly reasonable proposition — you have six months to figure this out, and we’ll see what happens.”

He faulted Congress for not dealing with immigration earlier — “I don’t understand why these guys can’t get anything done. I mean, it’s pathetic," he said. But he declined to say what should be done if Congress fails to address DREAMers’ status before the end of six months.

“I think Congress should come out with an immigration law, and DACA should be part of it,” he said. “I’m not for or against it. Obviously I don’t want to see a lot of these people disadvantaged, but I think it’s really up to Congress.”

Addressing a hot-button conservative issue, Schwartz said abortion should be legal but not funded by taxpayers.

“This is a personal choice,” he said Tuesday after announcing his candidacy. “If you want it, you pay for it.”

Schwartz likened the issue to gender-reassignment surgeries and said he’s not passing moral judgment — just trying to enforce the law fairly and equally. “If you want to change your sex, have at it, but you should pay for it,” he said.

Schwartz said what is “most crucial” is ensuring that a child is loved and cared for upon entering the world.

Schwartz has said the Legislature’s approval of a $750 million public contribution for the Raiders’ stadium — and zero money for ESAs — helped solidify his decision to run for governor.

His contempt for the stadium project hasn’t diminished. Schwartz acknowledged he can’t do anything to change the $750 million public contribution, but he would like to reduce stadium-related costs and funnel some of that tax money to causes such as paying teachers higher salaries.

“The governor does control the roads that go there,” Schwartz said, alluding to the governor’s place as chairman of the state transportation board. “You can go build your $2 billion stadium — you just may not be able to get there.”