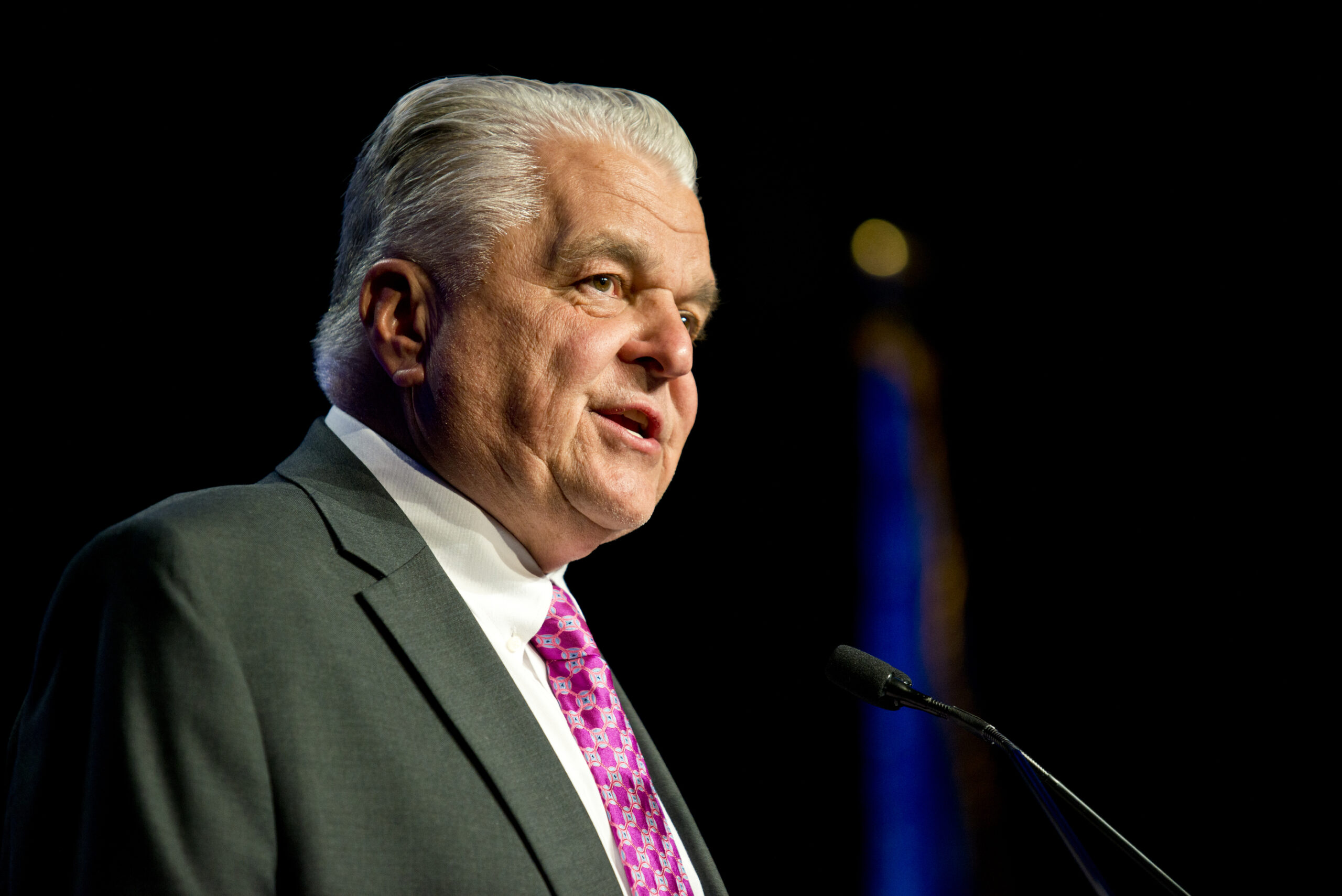 With less than 10 months to go before the 2022 midterm elections, Democratic Gov. Steve Sisolak still leads his likely Republican opponents, according to a new Nevada Independent/OH Predictive Insights poll.

The results of the poll, conducted from Jan. 19-26, show Sisolak in the lead over two possible Republican challengers, including a 4.4-point lead over Clark County Sheriff Joe Lombardo (52.2 percent to 47.8 percent), just outside of the poll’s 3.6 percent margin of error, and a nearly 9-point advantage against former U.S. Sen. Dean Heller (54.4 percent to 45.6 percent).

The poll’s topline results are an encouraging sign for Sisolak, who is vying for re-election in a difficult year for Democratic incumbents across the country, as inflation and murder rates climb and President Joe Biden’s approval rating remains low. Sisolak’s seat is rated as a “toss up” by the Cook Political Report.

But Mike Noble, chief of research for OH Predictive Insights, cautioned that those positive numbers could easily change as COVID-19 remains an issue in Nevada.

“Being an incumbent governor right now, with this pandemic still going on — no one's safe,” Noble said. “He's in a good position right now. However, a lot can change from now until Election Day.”

Sisolak did not poll as well against either Republican candidate in September, when a poll of likely Nevada voters conducted by The Mellman Group for The Nevada Independent saw Sisolak near-even with Lombardo and narrowly leading Heller by an amount within the poll’s margin of error.

Among Republican respondents, Lombardo emerged as a favorite. Though more than a third of 230 Republican registered voters surveyed said they were unsure about who they would vote for in the gubernatorial primary, 28 percent supported Lombardo, about triple the level of support for Heller, who was supported by 9 percent of respondents. At the end of 2021, Lombardo also led the Republican field in fundraising.

With so many Republican voters still undecided about the primary, Noble said there is room for a lot of movement in the field, but noted that Lombardo benefits from his job title.

The poll sampled 755 registered voters in Nevada via an online opt-in survey from Jan. 19-26, with 30 percent of respondents identified as Republican, 35 percent as Democrat and 34 percent as independents not aligned with either major party — percentages closely mirroring the state’s voter registration numbers. The poll has a 3.6 percent margin of error.

When pitted against Sisolak, Lombardo and Heller tracked slightly ahead of the incumbent governor among those 55 and older, each holding 2-point leads within the margin of error. But among those aged 18 to 54, Sisolak led Lombardo by 10 points and Heller by 16.

Against both Republicans, Sisolak performed significantly better among urban voters, leading Lombardo by 10 points and Heller by 12 points among respondents in Clark and Washoe counties. He also carried double digit leads against Lombardo and Heller among Hispanic respondents and women.

Lombardo also found ground among non-major party voters, leading Sisolak 52 percent to 48 percent among registered voters identified as independents. However, Heller did not see a similar advantage and trailed Sisolak by 6 points among independents (53 percent to 47 percent).

Sisolak’s strong showing in the poll was also seen in respondents’ views on him as an individual, as half of those surveyed rated him favorably, compared with 39 percent who expressed an unfavorable view of the incumbent governor. Those marks were nearly identical to a similar poll conducted by OH Predictive Insights last July, which saw 52 percent of 783 registered Nevada voters rate Sisolak favorably, and 39 percent rate him unfavorably.

Noble added that a coding error left out the choice for "unsure" on the poll, forcing respondents to make a determination, but Noble said it was unlikely to cause a major discrepancy in the results.

Though a common target of attacks from Republicans, he received positive marks for his handling of the pandemic. More than 50 percent of respondents expressed support for Nevada’s COVID-19 policies under Sisolak’s administration, compared with 36 percent of registered voters who were opposed. That level of support marked a decline from more than six months ago, when the July poll found that 60 percent of respondents approved of Sisolak’s handling of the pandemic, compared with 34 percent who disapproved.

“When navigating COVID, not everyone has done it correctly. But it seems that Nevadans so far have been giving him a thumbs up or pass,” Noble said. “When it comes to Sisolak’s favorability numbers, right now he's in a good spot, and he's handling things the right way … He's getting a good pass from voters on something that has been very politically polarized.”

Noble also noted that Sisolak could face challenges because of dissatisfaction with President Joe Biden. The poll found that Biden’s approval rating was just 41 percent among respondents, something Noble said can have an effect on local or statewide races.

“If inflation continues to increase, let's say they're still paying at the gas pump … the voters tend to take it out at the ballot box on the incumbent party,” he said.

The results of the poll highlighted the economy and education as issues that might become most prominent in the governor’s race. Among those surveyed, 33 percent identified jobs and the economy as the most important issue facing Nevada, followed by education (23 percent) and health care (14 percent).

Respondents were split nearly evenly in their views on the direction of the state, as 51 percent of those surveyed believe that Nevada is on the “right track,” compared with 49 percent who believe Nevada is headed in the “wrong direction.”

Updated at 11:24 a.m. to include additional information about the poll and a lack of an "unsure" option.