Precinct 1612: How Democrats caucused in one classroom at Durango High School 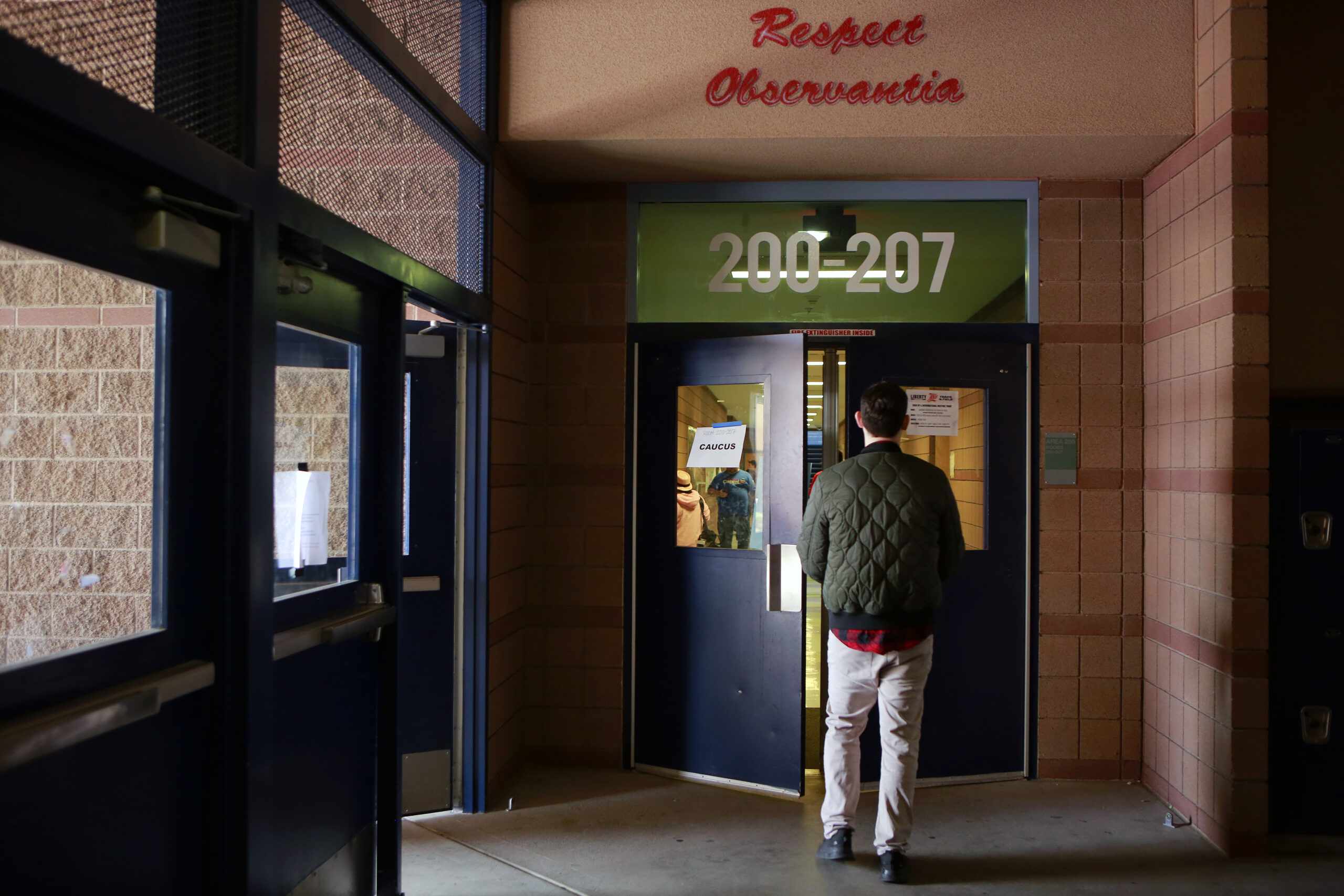 The hour before Nevada’s Democratic caucus was set to convene, Rose Rosenwach, a retired international law and diplomacy attorney, had taped up her caucus math poster, studied her script and reviewed her contingency plans.

Her home for the morning and early afternoon was a classroom in the 200 wing at Durango High School in Spring Valley. The previous day’s lesson, on the do’s and don’ts of writing, was still on the white board above the math poster.

Rosenwach, a precinct chair, had been through the trainings. She had checked her party-purchased iPad, received from her site lead, to make sure it was working. She had taped pieces of paper with the candidates’ names handwritten on them on desks and walls around the room. She had charged her husband with being her precinct secretary.

“You know you’re the secretary,” she good-naturedly ribbed him at one point as he tried to backseat drive her caucus. “You’re supposed to bring my coffee.”

All there was to do was wait for all of her caucusgoers to arrive.

Despite the high stakes riding on a successful outcome of Nevada’s caucus in the wake of Iowa’s failed contest earlier this month, Rosenwach wasn’t worried.

“We are going to have a very pleasant, civil caucus,” Rosenwach said before the caucus was called to order. “I have a purse and I’m not afraid to use it, because this should be a wonderful experience in democracy.”

"I happen to be a little neurotic about redundancies, so I’m very happy to have all the tools,” she said.

Three minutes before registration was set to close for the caucus, Rosenwach turned on her party-purchased iPad to try to log into a caucus calculator needed to help compute the results of early voting for each precinct, as early voters' presidential preferences flowed back to their home precincts to be counted alongside their neighbors’ preferences on Caucus Day.

“Oh, I got it to work!” she exclaimed, with a gasp of surprise.

When the clock struck noon, she let the couple dozen caucusgoers who had gathered in her precinct know that they would be starting shortly once they got the all clear that the check-in process had been completed. A little before 12:30 p.m., the caucus was underway.

It was only a couple of minutes when a mini crisis struck: Rosenwach was having difficulty with orienting the display on the iPad. Her husband and the site lead huddled around the device.

“Does anybody know how to work an iPad?” she said.

A young precinct captain for Massachusetts Sen. Elizabeth Warren came to the rescue, and Rosenwach was quickly able to record the number of in-person delegates at her precinct, 24, into the caucus tool. It spit back a number to her. Eighty people within the precinct had caucused early, for a total of 104 participants.

The device then informed her that each candidate would need a minimum of 16 supporters, across early voting and Caucus Day participants, to be considered viable in the caucus and qualify for delegates.

The functionality of the technology came as a pleasant surprise to Rosenwach and other precinct chairs interviewed by The Nevada Independent on Saturday, as it had been the source of much anxiety in advance of the Saturday caucus. Nevada Democrats didn’t announce how the caucus calculator was going to work until Thursday and only began debuting it to campaigns and volunteers on Tuesday.

Not everyone was as lucky as Rosenwach, though. At the same time across the state, the site lead at Sparks High School was conducting a manual tabulation using a paper backup of the early voting data after an iPad at a precinct there reported zero early voters after the realignment process.

One by one, Rosenwach counted off the numbers of supporters from each presidential preference group, typed them into a Google Form on the iPad and wrote them on her caucus math poster: former Vice President Joe Biden, 5; former South Bend Mayor Pete Buttigieg, 4; Minnesota Sen. Amy Klobuchar, 1; Vermont Sen. Bernie Sanders, 6; California billionaire Tom Steyer, 1; and Massachusetts Sen. Elizabeth Warren, 7.

After she pressed submit, the iPad displayed to her the results of early vote, and the total number of caucusgoers backing each candidate: Biden, 24; Buttigieg, 14; Klobuchar, 7; Sanders, 31; Steyer, 10; Warren, 15; and tech entrepreneur Andrew Yang, 3. Only Biden and Sanders were viable.

So, she started the 15 minute realignment period, where supporters of nonviable candidates could move over to viable ones or form a new viable group. At the end of that period, only one voter, who had backed Steyer, changed his mind and gave Warren the last vote she needed to become viable. But supporters of Buttigieg, who was only two votes away from being viable in the caucus, didn’t want to realign, nor did they manage to convince any in-person attendees to join them.

There was some brief confusion, here and at other precincts across the state, about how early voters would be realigned. Some were under the impression that they’d be able to take a peek at early voters’ second through fifth preferences to see whether they could cobble together a viable preference group. In reality, candidates needed to snag additional in-person supporters to add to their first alignment results to become viable. If not, they would lose the early voters who had aligned with them.

That was the case for Buttigieg, when Rosenwach entered in that four Buttigieg supporters had decided not to realign. The 10 early voters who had supported him on the first ballot were redistributed to their next highest viable pick. Two early voters also dropped off during realignment, likely either because they voted multiple times for the same candidate on their ballot or because none of their preferences were still viable.

When all was said and done, the calculator spit out the total of delegates who would be heading to the county convention on behalf of each candidate out of the caucus — six for Biden, six for Sanders and three for Warren. It was 1:25 p.m., an hour to the minute since Rosenwach had called the caucus to order.

Alexis Abreu, a Warren supporter at the precinct, said she had expected the process to be more deliberative than it was. She also noted how much more complicated it was than the last time she caucused in 2016.

“It was much easier with two candidates,” Abreu said. “I have to say that my opinion is I hope we just go towards primary voting with machines.”

The only minor incident during the entire process at the precinct was a brief scuffle between Rosenwach and an observer from the Sanders campaign who was confused about the delegate math and interrupted the caucus to try to get his questions answered. Under the party’s rules, observers are not allowed to speak during the caucus proceedings. Rosenbach warned him a few times before laying into him.

By about 2 p.m. Rosenwach had packed up the room and headed back to the building where her site lead was stationed. She found a quiet spot in the high school’s auditorium and dialed the number to call in the results of her caucus.

“And the line’s busy,” she said, holding her phone to her ear.

She tried two more times. Busy each time. So she resorted to the second reporting step, taking a picture of her caucus reporting sheet with her phone and texting it to the party. She took a couple of different pictures, included her precinct number, 1612, in the text, and sent it off.

It was a problem that precinct chairs all over the state were experiencing, reminiscent of the jammed phone lines in Iowa even though Nevada Democrats had hired a call center with 200 paid staffers to take down the results. One precinct chair managed to get through, but several others told the Independent that they gave up and, like Rosenwach, just resorted to texting the picture to the state party.

It wasn’t until after Rosenwach had left, a little after 2:40 p.m., that party volunteers across the state started getting text messages informing them that the party had opened up another reporting hotline.

Chris Erbe, a precinct chair at West Career and Technical Academy, said he got a text from his site lead about a half hour after he got home with the new reporting number. He called it and got an automated message informing him the wait time to speak to an operator was 30 minutes.

“I thought to myself, ‘You can go screw yourself. I’m not sitting here waiting,’” Erbe said. “I hung up and about 10 minutes later I called back, and an operator answered and said, ‘Let me take your numbers and I went, ‘Oh, okay,’ and I reported my numbers.”

Other precinct chairs reported a similar experience, being told the wait time was a half hour but getting through in anywhere between five to eight minutes.

A party spokeswoman, a little before 4 p.m., confirmed to the Independent that officials had “provided expanded capacity for the hotline to accommodate the influx of calls from precinct chairs.”

For Rosenwach, though, the caucus day went as well as it possibly could have.

“It was exactly the way I wanted it, and I thought the Nevada Democrats did a great job, every app, everything that they gave me to use was absolutely appropriate,” Rosenwach said. “Everything could not have been better.”

There are still a few lingering questions in the wake of Caucus Day, though. Several precinct chairs noted that runners for the party responsible for delivering lists of voters at their precinct who had voted early did not arrive until well into the check-in process. Some said either they didn’t receive the list or realize that they were supposed to use it to verify whether any in-person attendees had voted in the early caucus.

Those lists appear to have arrived late due to delays in processing the early voting information at the Democratic party’s ballot processing hubs. Several dozen volunteers, including some from out of state, were still processing and double-checking the roughly 39,000 ballots from the fourth day of early voting well into the night before the Saturday caucus.

A party spokeswoman was not immediately able to confirm on Saturday how the party will review possible double votes in the coming days and how those votes will be treated, particularly in cases where they could make the difference between a candidate being viable or not in a given precinct.

As the clock counted down until midnight on Saturday, officially bringing Caucus Day to a close, about 50 percent of precincts had reported.