Sisolak's ex recants allegations of impropriety with daughter, urges Laxalt not to use them in campaign 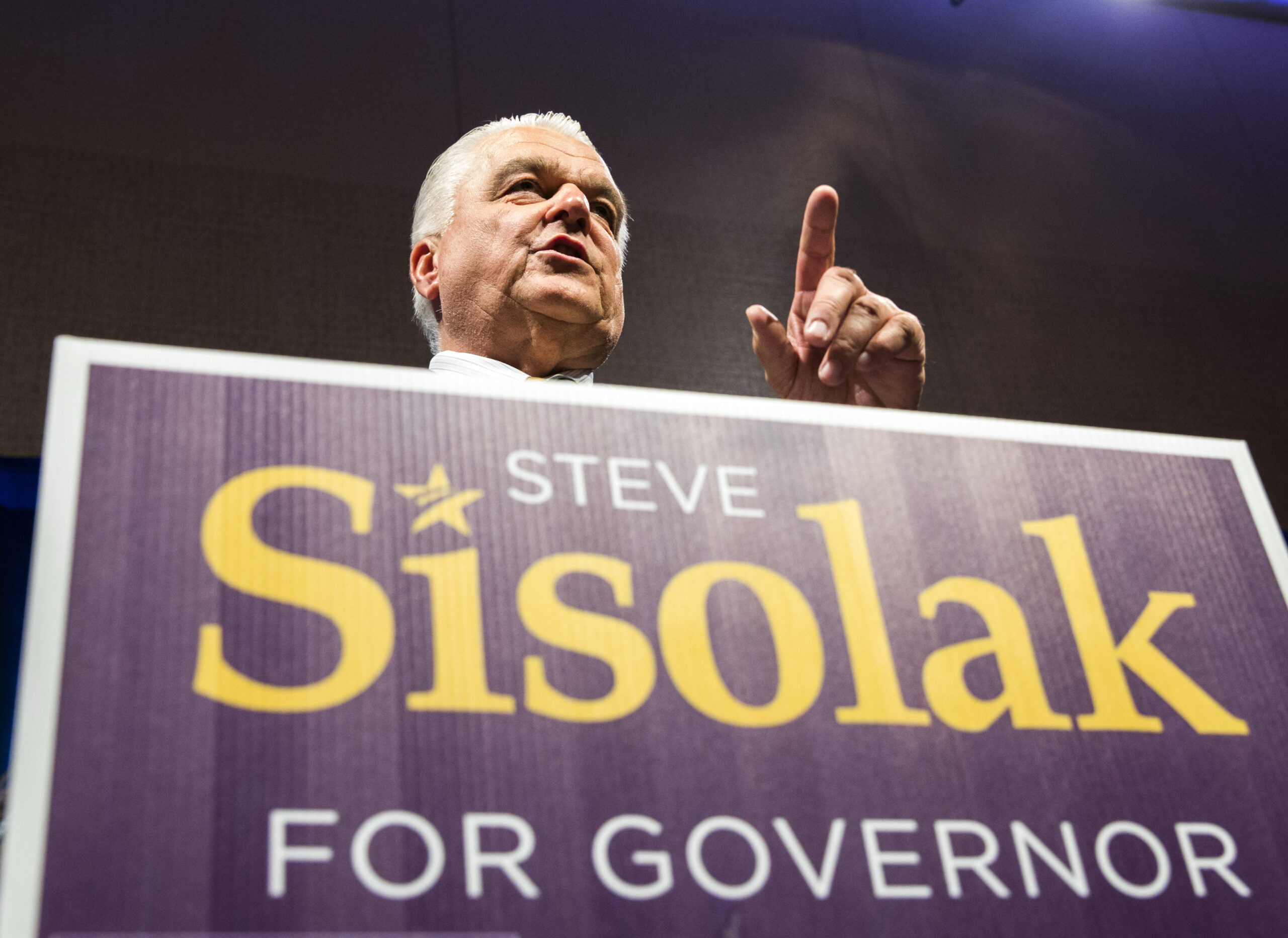 A lawyer for an ex-girlfriend of Democratic gubernatorial candidate Steve Sisolak has written a letter to his Republican opponent, Adam Laxalt, urging him not to bring up further details of a messy personal dispute following their breakup a few years ago, including allegations she has now recanted about inappropriate behavior toward her teenage daughter.

The letter, obtained by The Nevada Independent and first reported by the Nevada Current, comes after the Laxalt campaign referenced the personal matters in an opposition website called “Shady Steve,” and appears to be an attempt to head off a potentially damaging campaign issue that didn’t crop up in the Democratic primary election but is emerging in the high-stakes, nationally watched general election. The letter also includes a threat to sue if the allegations are used in the campaign without mentioning that the ex-girlfriend, Kathleen Vermillion, says they’re untrue.

On the opposition site, Laxalt’s campaign accused Sisolak, a Clark County commissioner, of trying to discredit a 15-year-old girl’s testimony against him and linked to a 2012 article about the situation.

In the letter to Laxalt, an attorney for Vermillion refers to “her current admission of her untruthfulness with regard to those accusations back in late 2011 and early 2012” and hints at potential litigation if their use brings her emotional distress and sets back her recovery from substance abuse.

“I also advised her that by coming forward as to the falsity of the accusations she made, any use of them by you or on your behalf, without also simultaneously revealing their untruth, could be actionable by her if it caused severe emotional distress resulting in mental or physical damage to her, such as relapse into addiction,” wrote attorney Dominic Gentile.

Laxalt campaign spokesman Parker Briden said the intent of the reference on the site, which frames Sisolak’s actions as “pay to play,” was to highlight the role Sisolak’s lawyer Laura Fitzsimmons had in trying to resolve the dispute between Sisolak and his ex-girlfriend and a contract Fitzsimmons later won from the Clark County Commission. Reached by phone, Briden said he wasn’t sure the campaign had received the letter yet and didn’t have immediate comment on the letter’s contents.

A Sisolak campaign spokeswoman criticized Laxalt for bringing up the issue.

"It's shameful that Adam Laxalt chose to go down a politically motivated path paved by false and disproven accusations that does nothing but harm a family trying to heal," said spokeswoman Christina Amestoy.

Vermillion, a former Henderson city councilwoman, filed a civil suit against the county commissioner in January 2012 that in part accused him of carrying out “improper and secretive” relationships with Vermillion’s children including her teenage daughter after they broke off their five-year relationship in 2011. She also accused Sisolak of releasing her private medical records and making defamatory statements that hurt her reputation in the community.

Representatives for Vermillion met with Sisolak after the lawsuit had been filed but before it had been served to detail allegations of the improper relationship, including a heavily edited videotaped “deposition” of Vermillion’s daughter saying he was “grimy” and suggesting he was physically attracted to her.

Vermillion’s team asked Sisolak for $3.9 million in exchange for her silence about the allegations in what Sisolak described as a “shakedown.” Police later investigated the incident upon a request from Sisolak and issued a warrant for Vermillion on charges of extortion, but the district attorney’s office never pursued a case against her.

Vermillion voluntarily dropped her lawsuit in early February 2012, just a few weeks after filing it.

In the letter sent Wednesday, Vermillion’s lawyer references Laxalt’s own struggles with substance abuse in asking him to show compassion toward Vermillion — who is in the middle of completing a 12-step program for substance abuse and addiction — by not making an issue of the allegations on the campaign trail. Laxalt has publicly acknowledged his struggles with alcohol beginning in middle school and that he had to seek addiction treatment by age 18; in his campaign announcement speech, he credited his ultimate turnaround to him committing to rehab and to God.

The letter says that Vermillion — who overdosed on prescription pills and alcohol in 2012 — has been sober now for three years, turned to a higher power and is working toward making amends with all whom she wronged during the course of her addiction, noting Sisolak as “prominent among them.” It describes allegations made by Vermillion that Sisolak behaved inappropriately toward her daughter as “untrue and begotten by the demonic impact that her addiction had upon her ability to perceive reality at that time.”

“I was taking unimaginable amounts of prescription drugs and abusing alcohol — from the minute I woke up until the minute I went to bed — and had been for a long time,” Vermillion wrote in a narrative given to her lawyer and quoted in the letter. “Now that I am sober, I realize how devastating and hurtful that accusation was.”

Shortly after filing the 2012 lawsuit and meeting with Sisolak, Vermillion’s representatives publicly released a heavily edited three-minute video featuring her daughter detailing experiences with Sisolak including shopping at a Victoria’s Secret and text messaging her at night. A police report obtained by The Nevada Independent concluded that Vermillion and others provided “some level of coaching” for her daughter’s answers, and that the video was edited “to look like something it was not.”

In an interview with police, Vermillion’s daughter said the video was out of context and that her answers had been prodded by her mother’s then-attorney.

“I think they wanted me to give different answers,” she said at the time. “And like they wanted just to make it sound, like not lie, but make it just sound more stretched, you know.”

The Las Vegas Metropolitan Police Department requested a warrant be issued against Vermillion in May 2012 on charges of extortion and conspiracy to commit extortion, following a police investigation into the matter.

Clark County District Attorney Steve Wolfson, a Democrat, ultimately decided not to file criminal charges against Vermillion and others involved in the incident, owing to a “number of loopholes and available legal defenses," according to a 2013 letter he wrote following the Metro investigation. But Wolfson said that it was his belief that false allegations were made in an attempt to obtain money from Sisolak, who he described as “clearly a victim.”

“After an entire review of the case file, two things were absolutely clear in my mind,” he wrote. “First, it was clear that false allegations were made against you for the purpose of obtaining money from you and, second, it was also clear that the daughter of Ms. Vermillion stated she had been coerced into making false insinuations against you, which could be characterized as unfair and untrue.”

Reached by phone, Vermillion confirmed Gentile was representing her but declined to comment further on the contents of the letter.

Sisolak and Laxalt are vying to replace termed-out Republican Gov. Brian Sandoval in what is expected to be the most expensive governor’s race in state history.

Updated at 7:45 p.m. on July 12, 2018 to add additional quote from police report.
Disclosure: Steve Sisolak has donated to The Nevada Independent. You can see a full list of donors here.
SHARE