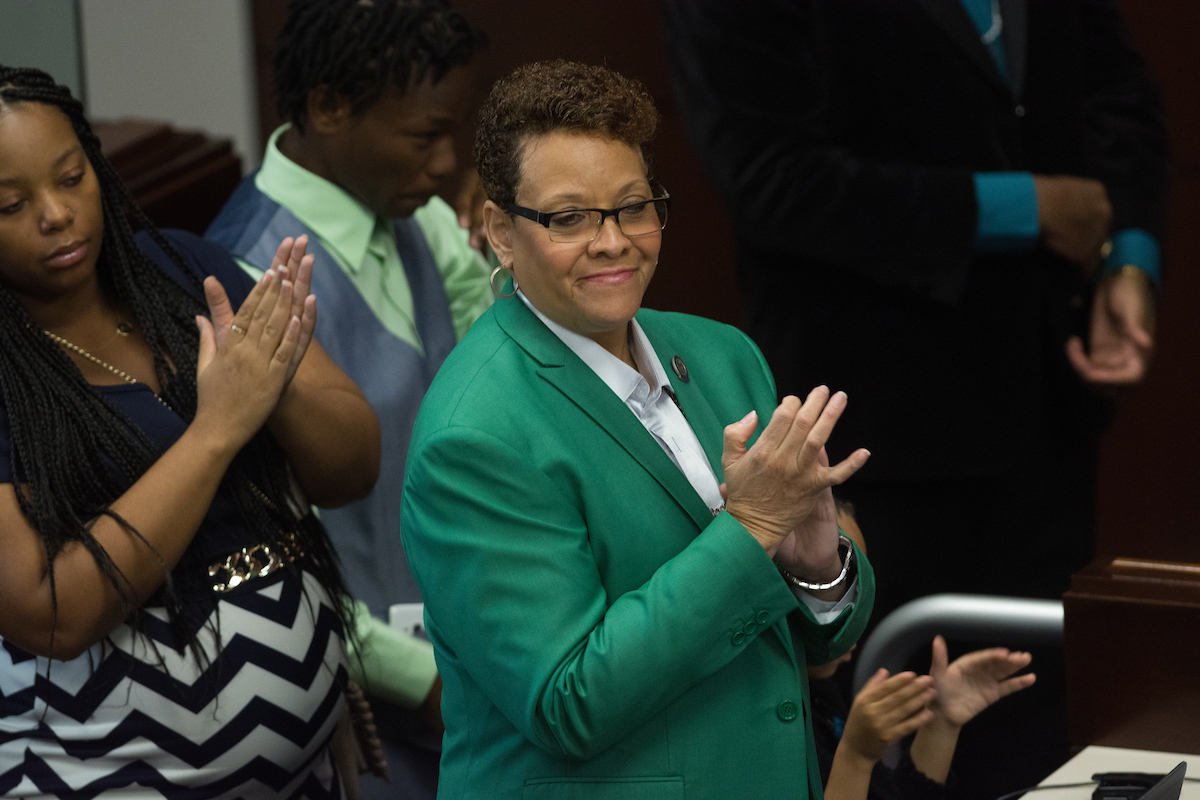 Shortly after telling a Democratic club that she was 99.99 percent sure she’d jump into Nevada’s 4th Congressional District race, state Sen. Pat Spearman acknowledged that she’s now fully in the contest.

“There shouldn’t be any doubt,” Spearman told The Nevada Independent on Thursday. She filed paperwork with the Federal Election Commission on Jan. 2 and has a campaign website up and running.

Spearman’s entry into the race could spell a competitive, multi-candidate primary for the seat left open when freshman Democratic Rep. Ruben Kihuen, dogged by allegations of sexual harassment and an ethics investigation, announced he wouldn’t seek re-election. Among those considering bids are ex-Rep. Steven Horsford, North Las Vegas Mayor John Lee, who derided the former congressman as "out of touch or lost touch with Nevada" and Regent Allison Stephens.

Spearman is an African American, lesbian veteran and pastor who’s known for her stirring oratory and interest in energy policy, veterans issues and leading the charge to ratify the Equal Rights Amendment.

“The voices of veterans got very, very loud over the holidays,” she said about her decision-making process. “They were pretty convincing.”

But Horsford is also seriously considering a run to reclaim the seat he lost in a 2014 upset, although he didn’t comment to the Independent this week on the status of his decision. After his loss, he moved to Washington, D.C. where he heads Resources Plus, the public relations and workforce consulting firm he founded.

His company is well connected to monied potential donors; it's contracted with MGM Resorts and the American Gaming Association. Spearman said she’s unfazed, and noted the fact that she hasn’t left the state.

“It doesn’t change anything for me ... I have to put blinders on and just run,“ said Spearman, who won a second four-year term in 2016 and doesn’t have to give up a seat to run. “I think the people of CD4 know who I am and I’ve been on the ground working hard since 2012 when I was elected.”

Asked about whether she’ll have the campaign coffers to run a successful race, she said she’s banking on support from small-dollar donors.

“Whether there are other donors that come on board, we’ll see, but dollars don’t vote, people do,” she said.

In the fall, Spearman tested the waters for the secretary of state position before pulling out after Democratic Assemblyman Nelson Araujo announced he was running. She said she wasn’t interested in creating a primary in that particular race.

Lee, in an interview, said he’s still excited and interested in the race and “getting calls from important people.” Democratic Rep. Dina Titus, who worked with him during their time in the Legislature, recently plugged his candidacy on Nevada Newsmakers.

“I’m not ready to announce today but I’m not letting any moss grow under my shoes,” he said in an interview this week.

Lee said he won’t be basing his decision on whether Horsford or Spearman, who beat him in a 2012 Democratic state Senate primary, enter the contest.

“I have no issue with people jumping into this race. The more the merrier,” he said.

But he had some pointed criticism for Horsford.

“I haven’t seen him since he lost. I don’t even think he lives here,” Lee said. “He’s joined the lobby ranks. I think he’s out of touch or lost touch with Nevada. This isn’t just a race you can test the water and jump in from wherever you’re at.”

In addition to Spearman, Horsford and Lee, progressive Amy Vilela — who jumped into the contest because she was unhappy with Kihuen’s lack of support for a Medicare for All proposal — remains in the Democratic race. Sierra Vista High School principal John Anzalone has also filed paperwork to run.

"I decided to jump into this race so I could have the opportunity to replicate the work I’ve done in CCSD on a larger scale," Anzalone told the Independent in an email. "In my 18 years in education, I have done all I can to support teachers, families, and generate equitable access to resources to the diverse communities I have served. I feel it is important to bring these values to Washington so that all citizens in Nevada can benefit from a strong education, clean and renewable energy, and equity for every race, sexual orientation, and socio-economic background."

“As far as my decision-making process, I think it's important to understand what my fellow residents in CD4 would want from their Congressional representative before just jumping in,” she said in an email. “If I run, I want to focus on the issues important to constituents, rather than Washington talking points. When I believe that I have engaged enough constituents to understand their concerns, I will determine whether I am a suitable candidate to represent them in Congress. I have not set a specific timeline.”

On the Republican side, Las Vegas City Councilman Stavros Anthony announced he is running for the seat, while former Rep. Cresent Hardy has said he’s mulling a bid.