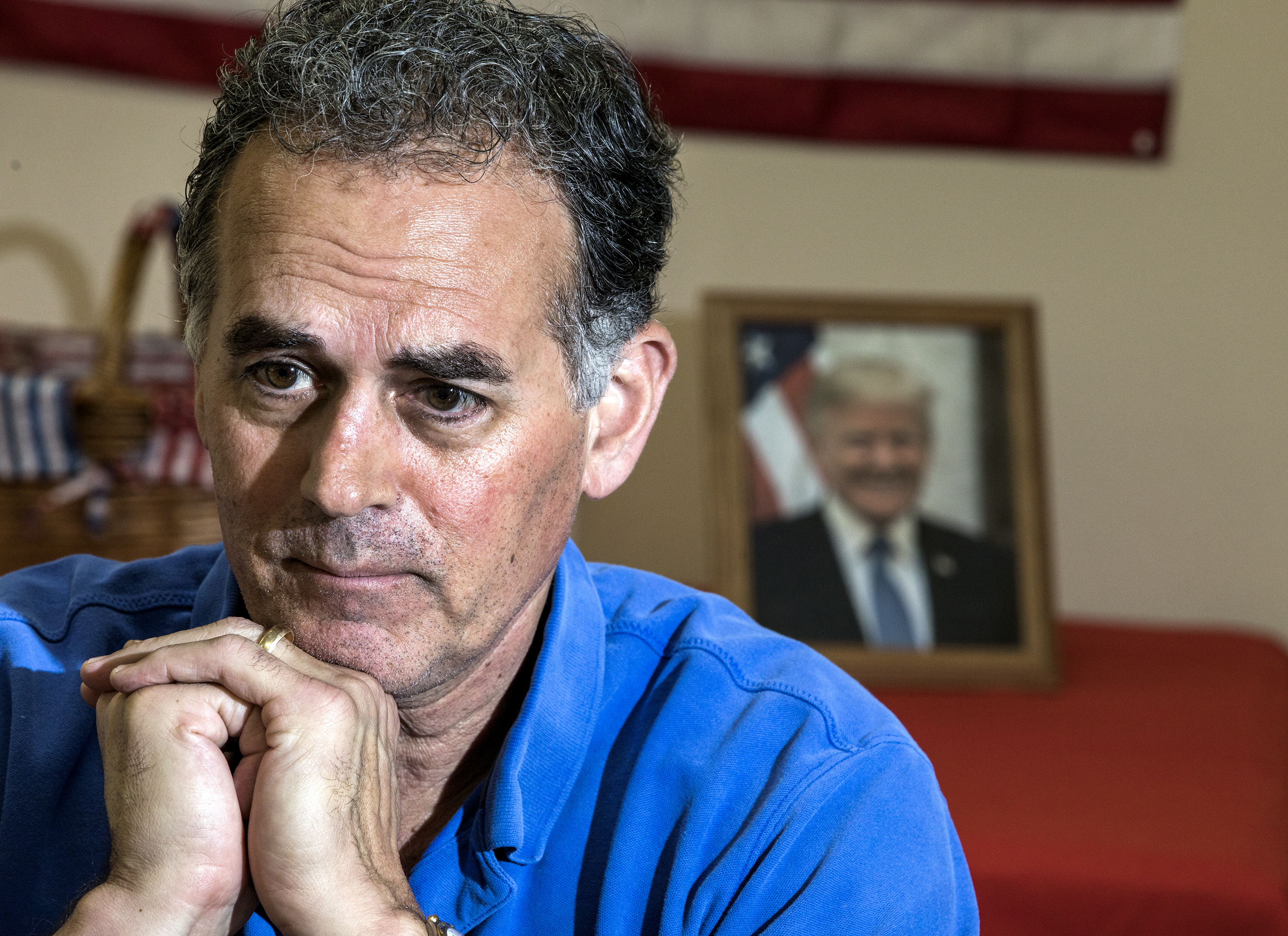 Businessman Danny Tarkanian and former television reporter Michelle Mortensen traded barbs during the first debate in the race to secure the Republican nomination for Nevada’s swingiest congressional district, with Mortensen deriding Tarkanian as a “perennial candidate” and Tarkanian quipping that Mortensen spent the last few years “doing reports on OxiClean and salad spinners.”

During the recorded debate hosted by the Las Vegas Review-Journal and published online Wednesday afternoon, the two candidates sparred over the question of whether President Donald Trump had actually endorsed Tarkanian for Nevada's 3rd Congressional District when he urged the businessman in a tweet to drop his primary challenge against U.S. Sen. Dean Heller in mid-March. Tarkanian said that he believes that the president’s tweet was “more than an endorsement,” while both Mortensen and a third candidate in the race, state Sen. Scott Hammond, argued that it wasn’t an endorsement because the tweet didn’t use the word “endorse.”

In the tweet, Trump said, “It would be great for the Republican Party of Nevada, and it’s [sic] unity if good guy Danny Tarkanian would run for Congress and Dean Heller, who is doing a really good job, could run for Senate unopposed!”

Tarkanian argued that an endorsement is when someone picks one of the candidates running in a race to support and that what the president did was to ask him specifically to run in Nevada’s 3rd Congressional District.

“So I think that’s more than an endorsement,” Tarkanian said.

“In fact this tweet said, ‘Hey, get out of Heller's race because you’re ruining it for us,’” Mortensen said. “So I don't consider that an endorsement at all.”

Hammond put it more mildly, saying that he didn’t see anything in the language of the tweet suggesting it was an endorsement.

“The language never said, ‘I am endorsing Danny Tarkanian.’ It just said, ‘It would be good if he got out and went into another congressional race,’” Hammond said. “He didn't even say CD3. I don't know if there were any other phone conversations or anything like that, I just know what I see and it doesn’t necessarily say I’m endorsing him.”

Tarkanian’s spokesman Richard Hernandez said in an email in April that the campaign has received confirmation from Trump’s 2020 campaign manager, Brad Parscale, that the tweet was an endorsement. (The Nevada Independent’s attempts to directly reach Parscale through the Republican National Committee have been unsuccessful.)

“Also, the White House reached out to us on the day of the tweet to let us know that the president had seen and appreciated [Tarkanian’s wife] Amy's tweet thanking him for the endorsement,” Hernandez said. “The communications we receive from the White House all confirm it is an endorsement.”

Tarkanian even said in the debate that the White House had asked Trump’s 2016 Nevada campaign manager Charles Munoz, who was appointed as the Environmental Protection Agency’s White House liaison, to run for the 3rd District seat because Trump “wasn’t happy with the people, including Michelle, that were already in the race.” Mortensen, in her response to the next question, quipped back, calling it a “fake endorsement” and joked about Tarkanian’s prior runs for office.

“We can see who the real liar is. Maybe it's the five-time loser. Or is it eight? I keep losing count,” Mortensen said.

Tarkanian lashed back by attacking the stories that Mortensen covered in her career as a consumer reporter, which ranged from helping a man get a prosthetic leg to reviewing Kinoki detox foot pads.

“While Michelle Mortensen was doing reports on OxiClean and salad spinners I was out defending President Trump on Fox News and MSNBC,” Tarkanian said, referring to his vocal support for Trump during his 2016 congressional campaign.

Mortensen defended her reporting, saying that while Tarkanian was a commentator on Fox News she was “on real TV solving real problems and refunding Southern Nevadans $1.4 million, getting real action, winning the fights that no one else could.”

Both Tarkanian and Mortensen largely avoided attacking Hammond during the 45-minute long debate, though Mortensen got in a veiled jab at Hammond in her two-minute closing statement over his support for part of a $1.1 billion tax package to fund education during the 2015 legislative session.

“We don’t need people who have betrayed us by voting for the commerce tax,” Mortensen said.

Hammond didn’t have a chance to respond to the criticism in the debate, but has previously said that he’s “no fan of increasing taxes all the time” but that he was “fairly happy” with the education programs the state was able to create as a result of the taxes. (Mortensen did, however, also say during the debate that the work Hammond had done in the same legislative session to create the state’s Education Savings Accounts program was “absolutely brilliant.”)

Besides the criticisms, the candidates addressed a number of substantive policy issues during the debate, including transgender military service, raising the minimum wage and foreign policy.

All three candidates agreed that it should be up to military leaders to decide whether transgender people should be banned from military service, but took a relatively libertarian stance on the issue overall.

Tarkanian said that “people should be able to live their lives the way they want to live their lives,” while Hammond referenced a quote from former Senator Barry Goldwater, saying “as long as they can shoot straight … that’s good enough for me.” Mortensen said she would say to anyone who wants to put their life on the line for their country, “More power to them.”

Asked about the case before the Supreme Court over whether a Colorado baker should be allowed to refuse to bake a cake for a same-sex couple because of his religious beliefs, all three candidates said that decision should be left up to the baker. However, Hammond said that although he believes it’s a matter of religious liberty, that doesn’t prevent the free market from responding if it disagrees.

“If you don’t agree with that, then of course people will say look I’d rather go to a baker who does both kinds of weddings,” Hammond said. “I think that’s the free market at its best.”

Mortensen said she doesn’t understand why anyone would choose to refuse to bake a cake for someone based on their sexual orientation, while Tarkanian said that turning down a customer in that situation is only “hurting your own business.”

The candidates all also expressed support for the president’s decision to move the U.S. embassy in Israel from Tel Aviv to Jerusalem and supported the recent movement toward some sort of negotiations with North Korea. They also all opposed raising the federal minimum wage to $15 an hour.