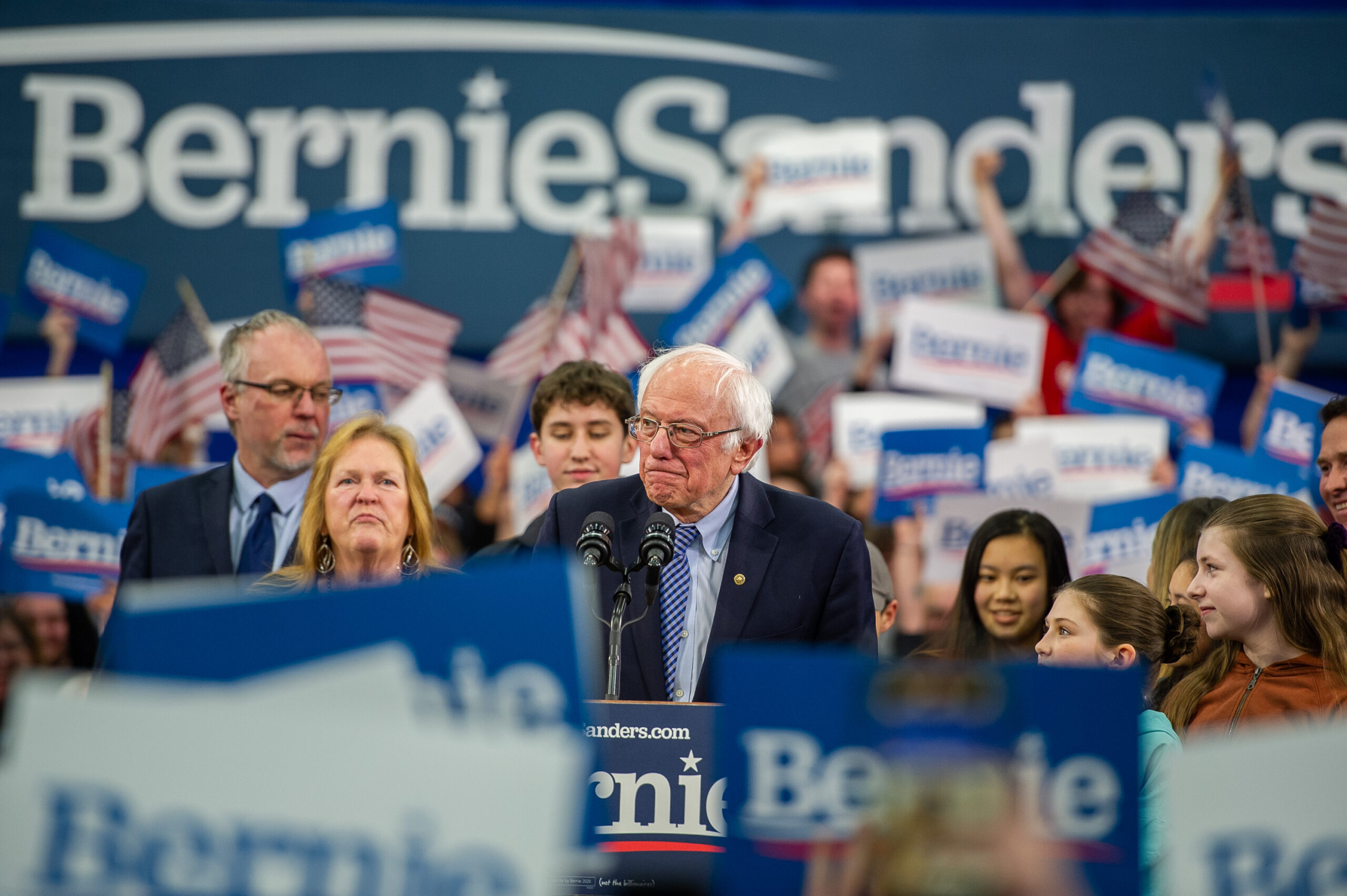 But former South Bend Indiana Mayor Pete Buttigieg was close on Sanders’ heels in the Granite State, emerging from the primary with about 24.4 percent support to the Vermont senator’s 25.8 percent as of early Wednesday morning. Minnesota Sen. Amy Klobuchar, in an upset, clinched third place, with 19.8 percent of the vote — beating out both Massachusetts Sen. Elizabeth Warren, who came in at 9.3 percent, and former Vice President Joe Biden, with 8.4 percent.

Sanders, in a primary night speech at Southern New Hampshire University in Manchester, declared victory a second time. Though the results out of Iowa’s first in the nation caucus last week are still in limbo, Sanders appears to have won the popular vote in that contest even as Buttigieg edged him in securing more delegates to the national convention.

“The reason that we won tonight in New Hampshire, we won last week in Iowa, is because of the hard work of so many volunteers,” Sanders told the crowd of about 1,200 that had packed into the university’s field house. “Let me tell you that this victory here is the beginning of the end for Donald Trump.”

For Buttigieg, even second place was a victory for what was at one point thought of as a longshot bid by a young Midwestern mayor.

“Thanks to you a campaign who some said shouldn’t be here at all, has shown that we are here to stay,” Buttigieg told supporters at Nashua Community College.

But the biggest surprise of the night was Klobuchar’s sudden surge into the top tier. The Minnesota senator, who has run a relatively quiet but steady campaign for the last year, didn’t even have the financial resources until a couple of months ago to hire a team in Nevada. But she defied expectations in Iowa, coming in only slightly behind Biden in that contest, and gave a formidable performance at a Democratic presidential debate last week, which have apparently helped her leapfrog Warren and Biden.

“Hello America, I am Amy Klobuchar,” she began her speech, by way of introduction, “and I will beat Donald Trump.”

Warren and Biden each tried to sound optimistic Tuesday night, but their poor performances out of New Hampshire after middling performances in Iowa last week have paved a difficult road ahead.

“We might be headed for another one of those long primary fights that lasts for months. We’re two states in, with 55 states and territories to go,” Warren said. “We still have 98 percent of our delegates for our nomination up for grabs and Americans in every part of the country are going to make their voices heard.”

Biden didn’t even stick around in New Hampshire to wait for the results to come in and instead headed to South Carolina, where he addressed his supporters Tuesday night.

“We just heard from the first two of the states,” Biden said. “Not half a nation, not a quarter of a nation, not two percent, two. Now, where I come from that’s the opening bell, not the closing bell.”

The candidates now turn their attention West, to Nevada, which holds the distinction of being not only the third state to participate in the presidential nominating process but also the first diverse state to weigh in on the race at its Feb. 22 caucus. Nearly 30 percent of the state’s population identifies as Hispanic or Latino, about 10 percent as Asian American and Pacific Islander and another 10 percent as black or African American.

From the get-go, Sanders has run a strong campaign in Nevada, hiring an experienced team of operatives to harness the grassroots enthusiasm that fueled his campaign in 2016. He now has more than 250 staffers on the ground, according to the latest figures from his campaign, and 11 offices across the state.

And, unlike some of the other candidates, he isn’t starting from scratch with Nevada voters. Though he lost the Silver State four years ago to former Secretary of State Hillary Clinton, he defied expectations by coming in only 5.3 percentage points behind her, making it a much closer race than most observers thought it would be.

Fresh off Iowa and New Hampshire, Sanders seems positioned for a strong couple of weeks of campaigning in the Silver State that could propel him to yet another victory. But there’s one major oppositional force standing in his way — the Culinary Union.

The 60,000-member hotel workers’ union is a political beast in Nevada — when it wants and has the time to be — and it’s showing that it doesn’t plan to make Sanders’ life easy in Nevada. The union, in a handout in both English and Spanish, is warning its members that Sanders’ will “end” their much-loved union health plans if he becomes president by enacting Medicare for all, a single payer government-run health insurance system that, by design, removes all other health insurance options.

For Buttigieg, victory in Nevada — and, by extension, a path toward the nomination — at one point seemed no more than a moonshot. Six months ago, his Nevada team was just starting to find its footing while other campaigns had been on the ground for months. He had barely visited the state. Voters were somewhat skeptical of this Midwestern mayor they knew little about.

But with time, his team grew into the second largest in the Silver State. As of this week, they now have nearly 100 staffers on the ground, with 12 offices open statewide including often forgotten corners of the state such as Pahrump and Fallon. And in a purple state where voters don’t often tend toward the extremes, his message of a middle way forward may find a soft landing.

Where Buttigieg has built an operation in Nevada to capture whatever momentum he was able to generate in Iowa and New Hampshire, things won’t be quite so easy for Klobuchar. The Minnesota senator only began to hire a team in Nevada at the end of November and, though she will have more than 50 staffers on the ground in the state by later this week, caucuses are a game of organization as much as they are of messaging, and she may not find it quite as easy to pivot her New Hampshire momentum into Nevada as she did her Iowa momentum into New Hampshire.

Nevada also serves as a key test for the former vice president, who has sought to chalk the results in Iowa and New Hampshire up to their lack of diversity. Biden has a longstanding relationship with Nevada, including its communities of color, built up over years of campaigning in the state, first for former Senate Democratic Leader Harry Reid and then as President Barack Obama’s running mate.

And then there’s Warren, who has fallen from a star candidate this fall to getting lost in the shuffle between her opponent’s successes and victories. Her campaign was the earliest to land in the state and were quickly identified as the team to beat by the other campaigns. The question now is if Warren’s apparent denouement is just prologue, and her team’s months of hard work building relationships in the Silver State will pay off come Caucus Day.