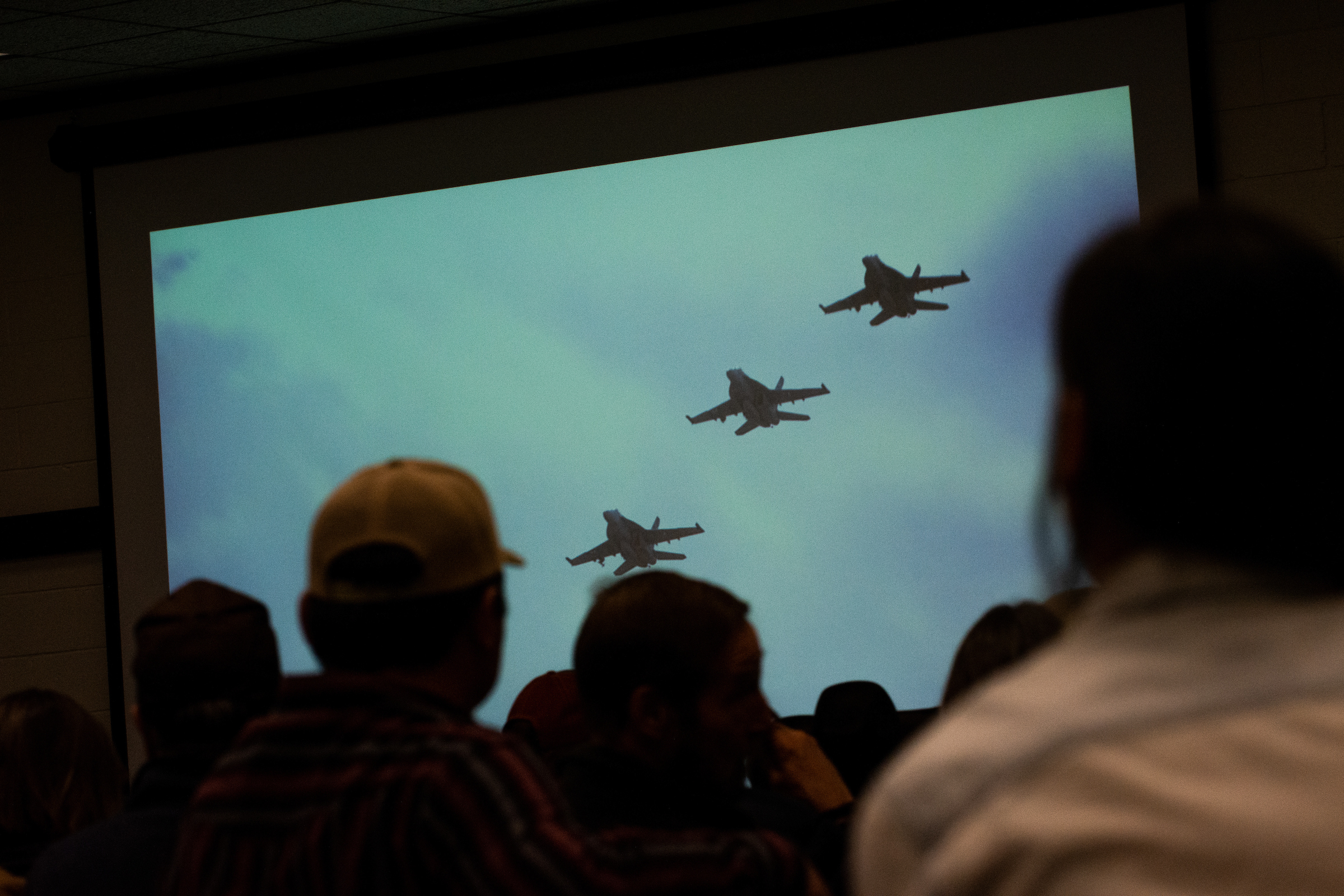 In exchange, the federal government will designate three new wilderness areas in Nevada and new funding and land holdings for two of the state’s tribes. The compromise – part of the FY2023 National Defense Authorization Act – marks a moment of celebration for Sens. Catherine Cortez Masto (D-NV) and Jacky Rosen (D-NV), and Rep. Mark Amodei (R-NV) and, in the tradition of Nevada lands bills, sparked a mixed reaction among the conservation community.

Fallon expansion – long a target of the Navy, which trains high-level personnel there – had been years in the making. In 2020, Cortez Masto’s legislation to expand the Fallon Range Training Complex stalled out. This summer, Amodei, whose district contains the base, tried to amend the National Defense Authorization Act to include the expansion, but was ultimately voted down in committee.

But on Tuesday night, the Navy and the Nevada delegation finally succeeded. The FY2023 NDAA, which sets the budget and policies for defense agencies, will withdraw 558,535 new acres of land in Churchill, Lyon, Mineral, Nye, and Pershing Counties for Fallon expansion, and, in the tradition of Nevada lands bills, protect 581,887 acres of land for new conservation and wilderness areas.

The Navy will also transfer $20 million each to the Walker River Paiute and Fallon Paiute Shoshone Tribes. More than 8,000 and 10,000 acres of federal land will be held in trust for each tribe, respectively. There are also more than 20,000 acres in land conveyances to Churchill County and 22,000 acres to Lander County for economic development.

The NDAA passed the House Thursday, with the support of all four representatives in the Nevada delegation, by a vote of 350-80. The bill will next head to the Senate, where it is expected to pass, before awaiting President Joe Biden’s signature.

“The responsible expansion of the Navy’s Fallon Range Training Complex has been a major priority of the Navy for years,” Cortez Masto said in a statement to The Nevada Independent. “I knew how vital this compromise was to both our national security and to the local economies and Tribal nations in Northern Nevada.”

The Fallon expansion is the first significant federal lands legislation in Nevada – though not a traditional lands bill – since the retirement of former Senate Majority Leader Harry Reid (D-NV).

“This is bipartisan, bicameral, historic landmark legislation that’s been years in the making,” Rosen, who sits on the Senate Armed Services Committee, said in an interview. “What we’ve done by getting it in is we’ve brought everyone to the table.”

Currently, the Fallon Range Training Complex, comprising four training ranges, sits on 232,290 acres of land in the Dixie Valley. The complex is anchored by the Fallon Naval Air Station, which hosts the training of Navy SEALs and Topgun fighters. The Navy has long eyed Fallon expansion in order to enlarge its bombing ranges.

Given that the surrounding area, like most of Nevada, is federal land, Congress has the authority to transfer it to military control. Now, the total area of the complex will be 790,825 acres. The military designated 270,000 acres for the Dixie Valley Training Area, which will remain open to the public under the direction of the Bureau of Land Management, in consultation with the Navy – a status that Churchill County successfully challenged the military for.

“This critical legislation enhances our Nation’s security by allowing our Carrier Air Wings and Naval Special Warfare Teams to train in a more realistic environment and better prepare for strategic competition,” Secretary of the Navy Carlos Del Toro said in a release.

Conservation groups had mixed reactions to the bill. The NDAA authorizes the creation of three new wilderness areas, two national conservation areas and two additional protected areas. The wilderness areas will be designated in the Clan Alpine Mountains, the Desatoya Mountains and Cain Mountain.

Patrick Donnelly, the Great Basin director for the Center for Biological Diversity, said he will hike in the new wilderness areas and that their designation will protect the mountain lions, bighorn sheep, and mule deer, among other species, that live in those mountains. But he finds the concept of land swaps illegitimate.

“We really challenge the idea of the tradeoff – that somehow protecting these mostly remote mountain ranges compensates for the military taking over hundreds of thousands of acres of public land,” Donnelly said in an interview.

Donnelly also questioned how the Bureau of Land Management would run the Dixie Valley Training Area given that the Navy now has input on its land use.

“It's going to be pretty weird, because it's still public land – you can still go out there and recreate,” Donnelly said. “But there's going to be guys driving tanks around and low-lying aircraft performing exercises. I kind of don't want to be around when that's happening.”

The Great Basin Water Network also opposed the legislation because it supports the Dixie Valley Water Project, a county proposal to pump water from the Dixie Valley Training Area into Churchill County. GWBN is worried that the project would dry up critical water resources and threaten endangered species.

The NDAA specifies that the Navy should work with the Department of the Interior and Churchill County on permitting “subject to the public land laws and environmental review,” which Cortez Masto’s office confirmed just clarifies that the Navy cannot block the project, and that any further action will still be subject to environmental compliance law.

Shaaron Netherton, the executive director of Friends of Nevada Wilderness, said that while the prospect of any military expansion is not exciting, the creation of the three new wilderness areas – as well as the tribal provisions – mark a win for the conservation community. Netherton was particularly proud that Fox Peak, the origin site of the Fallon Shoshone Paiute Tribe, is now permanently protected.

“It just provides certainty,” Netherton said. “These areas have been wilderness study areas since the late 1970 and 1980s. Now, stakeholders know what’s wilderness and what isn’t wilderness, and we can move forward with management plans and celebrating new wilderness areas.”

The largest new protected area will be the nearly 218,000-acre Numu Newe Special Management Area, in Churchill and Mineral counties, to “protect, conserve, and enhance the unique and nationally important historic, cultural, archaeological, natural, and educational resources of the Numu Newe traditional homeland,” per the legislation.

The Secretary of the Interior will have two years to create a management plan for the land with tribal leaders and local entities, incorporating Fallon Paiute Shoshone Tribe historical knowledge and prioritizing the preservation of their cultural and religious sites. The $20 million for the Fallon Paiute Shoshone Tribe is also designated for the construction and endowment of a cultural center on their reservation to sustain and promote Numu Newe knowledge and language.

The $20 million for the Walker River Paiute Tribe is recompense for the Navy’s use and contamination of reservation land.

“This is a momentous day where an historic injustice against the Walker River Paiute Tribe has been resolved because of the great leadership of Senator Catherine Cortez Masto in concert with the Nevada congressional delegation,” Amber Torres, chairperson of the Walker River Paiute Tribe, said in a statement. “We can now begin the healing process, with restored sacred lands, expansion of our tribal homeland, just compensation, and the opportunity for new economic development for the benefit [of] our people.”

Amodei said the “cultural resource” component of the legislation – the financial and land transfers to tribal nations – is the Department of Defense’s largest ever such commitment.

“We’ve gone from not much going on for cultural resource purposes of Great Basin Native nations, to probably – when this is fully implemented – the number one program in the nation,” Amodei said in an interview.

Amodei had hoped that other lands bills in the works – including land transfers in the Ruby Mountains, Douglas County and Pershing County – would make it into the bill, but he said they were left out because of a longstanding grudge held by a staffer on the Senate Energy and Natural Resources Committee against a lands bill championed by Reid in the 1990s.

But Amodei said Fallon expansion was ultimately able to get into the NDAA because it had the backing of key allies such as Rep. John Garamendi (D-CA), an influential member of the House Armed Services Committee, and Sen. John Barrasso (R-WY), the ranking member of the Senate Energy and Natural Resources Committee. While the expansion always had the support of both chambers’ Armed Services Committees, Amodei said his amendment failed over the summer due to a lack of communication with the House Natural Resources Committee.

When the Senate took up the bill, Cortez Masto’s office said she helped shepherd the provision through the eight committees that approved the amendment text. By re-engaging those committee chairs, Amodei said the Fallon provision – which has been floating around for five years and thus gave other members confidence in it – successfully made the bill.

“The bill didn’t have any hidden stink bugs in it,” Amodei said. “If you want some certainty, and something that’s been vetted for half a decade, then the timing was appropriate.”