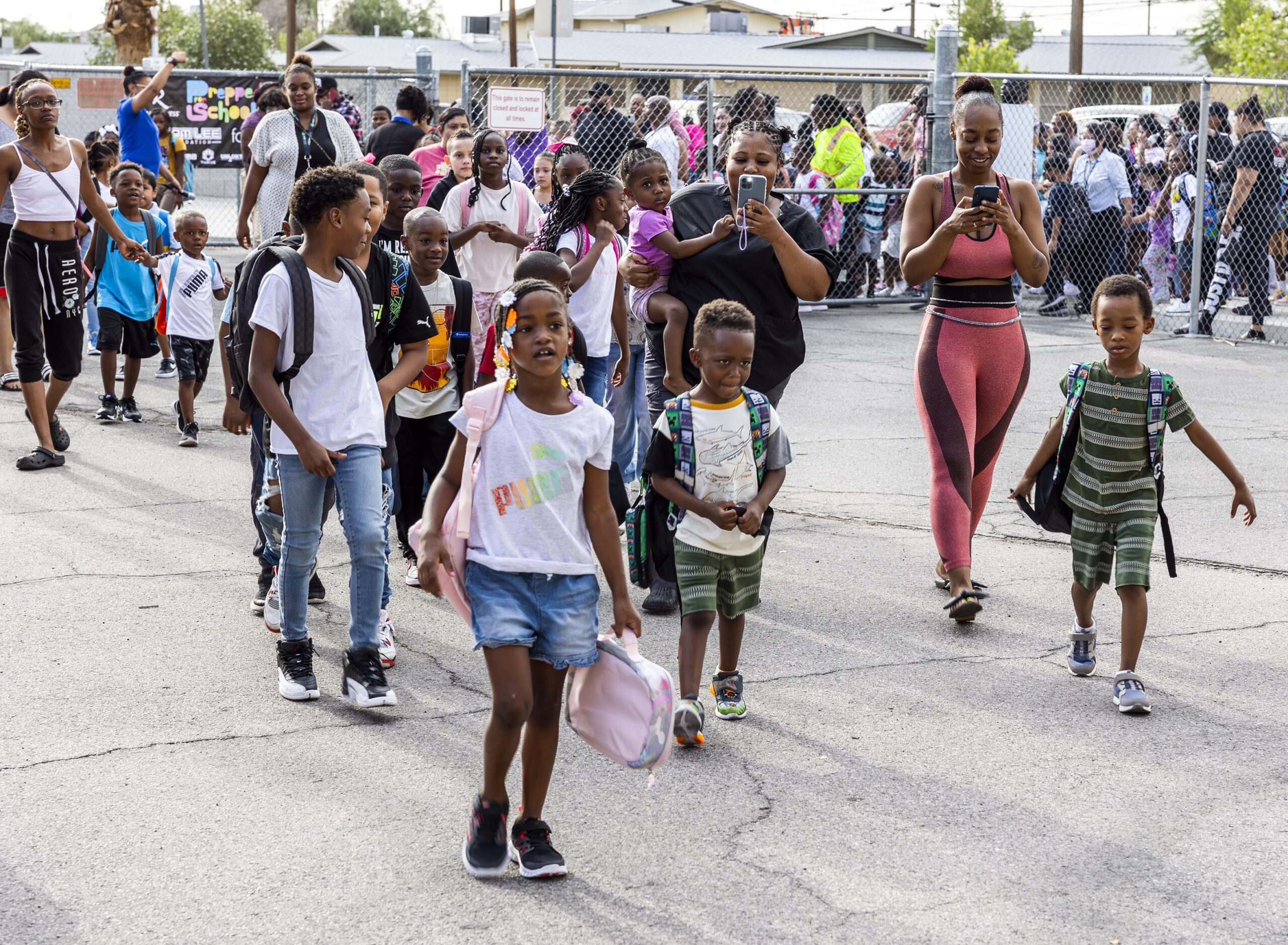 Ready or not, school is back in session in the Clark County School District.

Braving the 100-degree weather, nearly 292,000 students returned to the classroom on Monday for the beginning of the 2022-23 academic year. The first day of school was filled with excitement from students reuniting with their friends and catching up on their summers, as well as teachers eager to meet the students and get their classes started.

Underneath the excitement, though, are concerns about how the district will handle its unprecedented number of vacant teacher positions, particularly at schools that serve mostly Black and Latino students.

The district starts off the 2022-23 school year with 92 percent of licensed educator positions and 91 percent of support staff positions filled, Jara said. Approximately 1,300 classroom teacher positions remain unfilled, according to the district. That number is significantly higher than the number of vacancies the district has had in previous school years.

Amid recruitment efforts aimed at finding new teachers, Jara said the district will try to direct substitute teachers and new teacher hires to schools with the most need. He is also looking to send district employees with teaching licenses to those schools.

On Monday, the district’s fill rate for substitutes was 62.5 percent. And on the transportation front, a little more than 80 bus routes still had vacancies, Jara said, but 90 percent of the district’s buses arrived on time.

School safety is another issue at the top of mind for school officials, parents and students — particularly after the increase of violence that Clark County schools experienced last school year, and the May mass shooting at a Texas elementary school.

As of Monday afternoon, district police had not reported any issues, Jara said. In addition, he said the district’s officers have been training all summer with other Clark County law enforcement agencies on how to respond to emergency situations.

“So my message to the community is that we're ready,” he said.

The celebratory atmosphere brought smiles and masked some of the first-day jitters experienced by students and parents alike. Maria Flores dropped off her third-grade son at the campus, hopeful that he will make friends at his new school but worried that he’s not reading at grade level.

“They only told me that he was a clown boy,” she said about her son’s previous teacher. “And [that] he wasn't mature for his age. So I'm like, yeah, well he's a kid.”

Flores said school leaders at Matt Kelly have told her they will assess her son’s academic needs and go from there.

But the West Las Vegas school is facing its own uphill battle as well. It has the highest teacher vacancy rate — 41 percent — in the entire school district. Trends across the valley shows that schools with about 80 percent of students who are Black or Latino tend to see at least a 20 percent teacher vacancy rate.

Principal Jerrell Hall told The Nevada Independent she is committed to the roughly 400 students for the long haul, despite the chronic teacher shortage and the school’s recent history of rotating principals.

“Career paths take people in different directions, but I have made a commitment to take a long-term stay here at Matt Kelly,” Hall said.

A lack of empathy and cultural competence contributes to the school’s teacher shortage, said Ariece Perkins, a programmer for Reinvent Schools Las Vegas, a city-backed partnership with select schools. He said some teachers experience culture shock when they learn the depth of students’ needs.

Echoing local officials and other school leaders, Perkins said students — many of whom have experienced trauma — need consistent positive engagement from community leaders.

“I mean, [circumstances] could be good here, but as soon as they go home, it's back to their usual,” he said. “So it's an everyday [need], pouring into our kids … coming up here, even if you just stop by for lunch.”

With the click of a few buttons, Clark County students can access help from a tutor any time, anywhere.

The Clark County School District announced on Friday a partnership with Paper, an online platform that pairs students with tutors through a chat-based system available 24 hours a day, seven days a week. District officials said they’re putting roughly $6 million worth of pandemic-era funding from the federal government toward the initiative, which will be free for all students.

Tutoring — for more than 200 academic subjects — is available in English, Spanish, French and Mandarin. The availability of different languages makes it a more equitable service for the diverse student body, said Greg Kramer, the district’s director of Title 1 programs, which strive to provide equal opportunities for students from different ethnic and socioeconomic groups.

Private tutoring can be financially out of reach for many families.

“This opens it up so everybody no matter where they are in the spectrum … (can) have that equitable access to this tutor,” Kramer said.

The school district launched a pilot program using Paper at 11 schools in the spring. District officials said they’ll continue monitoring how and when students take advantage of the tutoring, noting that it can be used inside the classroom as well.

In fact, an analysis from Paper found that students most often accessed tutoring at lunch time during the 2021-22 school year. The average length of tutoring sessions also grew in length as students’ age increased — from 16 minutes at the elementary level to 18 minutes in middle school and 27 minutes in high school.

That includes her students, and when they are feeling down or overwhelmed, her school offers them a space where they transform their negativity into positive outcomes.

The so-called “zen den” began as a way to address student behavior even before the pandemic, Manning said. The room started with punching bags, but the North Las Vegas school later added other stations where students can relax or let their energy out. Today, the room is equipped with items such as mini trampolines, cozy seating, a hammock and a weighted blanket. Relaxation music fills the space.

It’s a place where teachers can direct students if they are acting out or if staff notices that they are having a bad day and need additional support. But students can also earn time in the zen den individually or as a class with good behavior, Manning said.

“For the most part, what it's focusing on is re-shifting negative behavior to positive behavior and rewarding that, because the behavior we pay attention to is the behavior we're going to get the most,” she said. “As long as we can continue to provide that support to students, and they're getting that intrinsic motivation, their behavior naturally starts to switch.”

Students aren’t the only ones getting something out of the zen den. Manning said staff members — herself included — also enjoy visiting the space during their prep time if they are having a tough day.

“On a super stressful day, you just go sit there for 10 minutes, and you can put your computer on your lap, and you just reset and you're ready to go,” she said.

Monday was filled with many firsts at Harley A. Harmon Elementary School. It was the students’ first time inside the $32 million building, a replacement school located near Nellis Boulevard and Hacienda Avenue in the eastern valley.

Signage from the original school — a 50-year-old building — now resides on the wall of the new building's entryway. Principal Shannon Schumm said returning students and staff will notice the new campus features more technology in the classrooms, such as projectors and surround-sound systems, which are especially helpful for students who are hard of hearing.

“So all of their lessons … they'll be able to see those and hear those to the best of our ability, where before we had one microphone and one speaker,” Schumm said.

Monday was also Lidia Sibrian’s first day as a licensed educator, but the kindergarten teacher is not a new face to the elementary school. Sibrian previously worked at the school as a special needs support professional and substitute teacher, and was able to transition to her new role through a UNLV program that expedites teaching accreditation for support staff with some college education, helping them become fully licensed teachers in only one year. Schumm said another instructional aide is making her way through that program.

Sibrian admits she was nervous about starting her first official year as a teacher, but she was excited to meet with the students. She said one of her goals for the first day was to provide students with a safe, welcoming classroom.

“I just absolutely love working with kids,” Sibrian said. “It's always been my passion.”

Although Jara expresses optimism for the upcoming school year, his superintendency has been clouded by friction with several school board members.

Last year, the Clark County School Board terminated him, then changed course several weeks later following a second vote. During the contentious time period, Jara accused some board members of creating a hostile work environment.

Nearly nine months later, at a school board meeting Thursday, trustees will discuss and possibly approve a settlement between the board and Jara over those claims of a hostile work environment and retaliation.

Jara and the board said in a joint statement prepared ahead of the meeting that they’ve reached an agreement to move forward. If approved by an official board vote, Jara will be awarded $95,000 from the Board Office Budget to pay for his legal fees.

“Our hope is to proceed collaboratively, allowing us to fully focus on our greatest priority, serving students and improving student outcomes,” the statement reads. “There is so much work to do, but if we focus on supporting our students, families, staff, and community, we are positive we will continue to move in the right direction together.”

Jara declined to say more on the matter at the Monday press conference. Board President Irene Cepeda said their focus should be on student outcomes.