Crowded races, some surprises at close of Nevada candidate filing 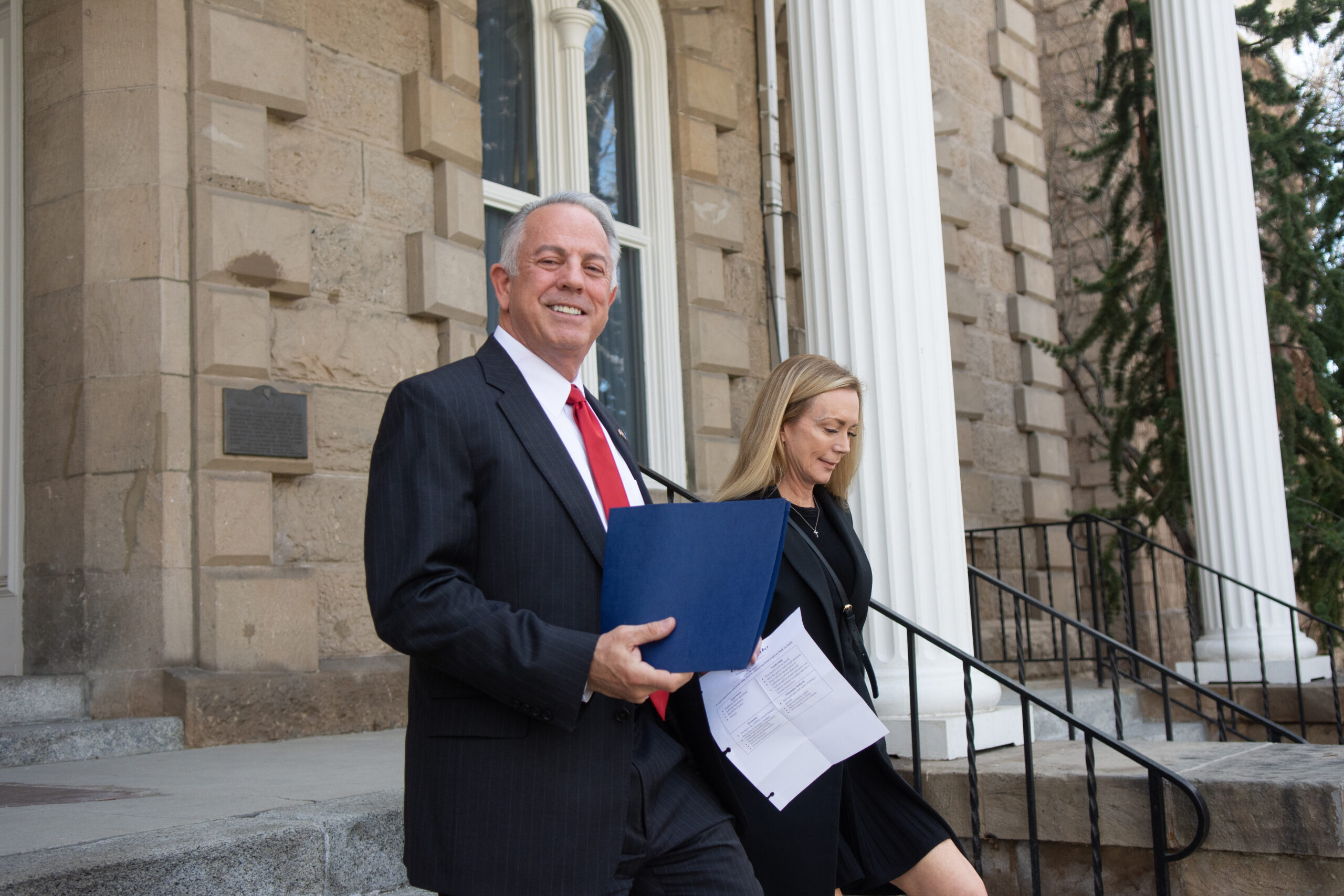 Nevada’s nearly two week-long candidate filing period came to a close on Friday, setting up crowded races for statewide, congressional, legislative and down-ballot seats up for election in 2022.

The end of filing means campaign season is officially underway, as candidates — including more than 60 who filed in Clark County on Friday — prepare for the June 14 primary election and Nov. 8 general election. Candidates have until March 29 to withdraw from races.

In a midterm election year without a presidential contest, Nevada’s incumbent Democrats are facing challenges up and down the ballot, including Gov. Steve Sisolak, one of 22 candidates who filed for governor.

Other non-judicial statewide seats, up for election for the first time since 2018, have also drawn long lists of candidates. Recently appointed Democratic Lt. Gov. Lisa Cano Burkhead is facing 13 challengers in the race for lieutenant governor. Ten candidates filed for secretary of state.

Candidate filing also provided an early look at which lawmakers will be holding office again in 2023, as two legislative incumbents did not attract any opponents, essentially guaranteeing their re-election. Another four seats are set to be decided in the primary. But most seats have multiple candidates and opponents from different parties, as Republicans hoping to take advantage of a possible red wave are running for all 53 legislative seats up for grabs in 2022.

A record 22 candidates, including incumbent Steve Sisolak, filed for governor over the last two weeks, making it the most crowded gubernatorial race in the state since at least 1962.

Lt. Gov. Lisa Cano Burkhead, a Democrat, filed her bid to keep the office for a full four-year term, after she was appointed to the position in December. Thirteen candidates are vying for the job.

Incumbent Democrat Aaron Ford faces an easy primary with only one opponent — Stuart MacKie, who ran against him in the 2018, lost handily and has no political presence to speak of. The contest is more lively on the Republican side, where stridently anti-mask mandate lawyer Sigal Chattah is running a grassroots bid against Tisha Black, who counts on the deep political expertise of general consultant Chris Carr and proved her fundraising chops in raising millions for a 2018 Clark County Commission bid she lost to Justin Jones.

Former Nevada Athletic Commission Chairman Cisco Aguilar is running unopposed in the Democratic primary after former Assemblywoman Ellen Spiegel bowed out and jumped into the controller’s contest instead last month. There’s much more excitement in the seven-way GOP primary, which features well-funded Reno developer Jesse Haw and Sparks City Councilman Kristopher Dahir — both more moderate in their views — as well as former Assemblyman Jim Marchant, who doubts the results of the 2020 election and has pushed for drastic overhauls of election processes in Nye and other rural counties.

Perhaps the biggest surprise of candidate filing was Las Vegas City Councilman’s Michele Fiore’s last-minute jump from the crowded governor’s race to the sleepier treasurer’s race, citing guidance from “Trump’s team.” She’ll bring her brash brand into a race with businessman and political newcomer Manny Kess, who has support from former Lt. Gov. Mark Hutchison and has already sunk a considerable amount of his own money into the race.

The ubiquitous Democratic incumbent Zach Conine, who has sought to bring more relevance to the seat by taking a major role in disbursing billions in federal COVID relief dollars, signaled he would not go down without a fight. He shot back on Fiore’s news with a release highlighting the “serious work” of the office and vowing a campaign to underscore “the importance of keeping a qualified and proven leader in this position.”

No other Democrats are running for treasurer; two minor party candidates have filed.

Rookie Republican Assemblyman Andy Matthews, a former executive at libertarian think tank Nevada Policy Research Institute who has worked for former Attorney General Adam Laxalt’s PAC, is uncontested in the GOP primary for the job. The only other candidate who filed is Libertarian Jed William Profeta.

Nevada Supreme Court Justice Ron Parraguirre and Eighth Judicial District Court Chief Judge Linda Bell did not draw opponents in their runs for state Supreme Court, meaning the two will be automatically elected to a six-year term on the state’s highest court.

On the three-member Court of Appeals, which was created through a ballot initiative in 2014 and hears cases pushed down from the state Supreme Court, Justices Michael Gibbons and Bonnie Bulla both filed for re-election for a six-year term. Neither justice drew an opponent.

Though there are just three Senate candidates with substantial financial backing for the 2022 election cycle, 16 people ultimately filed ahead of Friday’s deadline.

The wide Republican field is topped by two well-funded contenders — former Attorney General Adam Laxalt, endorsed by Trump and long viewed as a favorite for the race, and Sam Brown, a dark horse who has kept pace with Laxalt in large part due to several sustained months of big money.

Among the Democrats, Cortez Masto will run against several relatively unknown candidates, with the highest profile belonging to self-described Democratic-Socialist candidate Allen Rheinhart. Rheinhart ran and lost in major elections dating back to 2014, including bids for Nevada’s Senate seats in 2016 and 2018 (elections in which he garnered 5.6 percent and 3.6 percent of the vote, respectively).

Other Democratic candidates include Corey Reid and Stephanie Kasheta.

District 1 became more competitive after the Legislature reconfigured the district to extend farther east and include more of Henderson and Boulder City, adding more Republican voters.

Rep. Dina Titus (D-NV) has held the seat since 2013, but she faces a primary challenge from progressive Amy Vilela, who previously ran for District 4 in 2018.

The race for Northern Nevada’s Congressional District 2 got more interesting on the final day of filing when Douglas County Commissioner Danny Tarkanian jumped in to challenge Rep. Mark Amodei.

Although the district maintains a sizeable GOP advantage, Amodei faces a tougher path to another term with four Republican opponents. They include Tarkanian, who won the commissioner seat in 2020 after losing several bids for office over the past two decades, and Joel Beck, an Air Force veteran who lost in a primary to Amodei in 2020.

Six Democratic hopefuls joined the race, including Tim Hanifan, a UNR graduate who has so far based his campaign on being younger than other candidates and a fifth-generation Nevadan.

Independent Russell Best, who lost previous races for other districts and the governor’s office, is also running for District 2.

Rep. Susie Lee (D-NV), vying for her third consecutive term in a district that became more favorable to Democrats after redistricting, faces just one primary challenger in Randell Hynes.

In wide-reaching District 4 that covers parts of rural Nevada and North Las Vegas, Rep. Steven Horsford (D-NV) will cruise to the November general election with no primary opponents.

Former world champion professional boxer Jessie Vargas, who had mounted a campaign, did not file. In a statement released Monday, Vargas said he was suspending his campaign to focus on his family and boxing career, including a fight scheduled for April 30.

It’s a significant departure from 2020, when nine state lawmakers, including five Democrats, failed to draw a primary or general election opponent. The Nevada Republican Party took credit, issuing a statement Monday from party Chairman Michael McDonald saying “we have made a strategic investment to recruit and train Republican candidates across the board. That investment has paid off.”

Still, Democrats are expected to maintain their current legislative majorities (26 of 42 Assembly seats, and 12 of 21 state Senate seats) after building in structural advantages in voter registration through last year’s redistricting process.

A handful of legislative races will be decided in the primary election or did not draw a Democratic opponent, including: