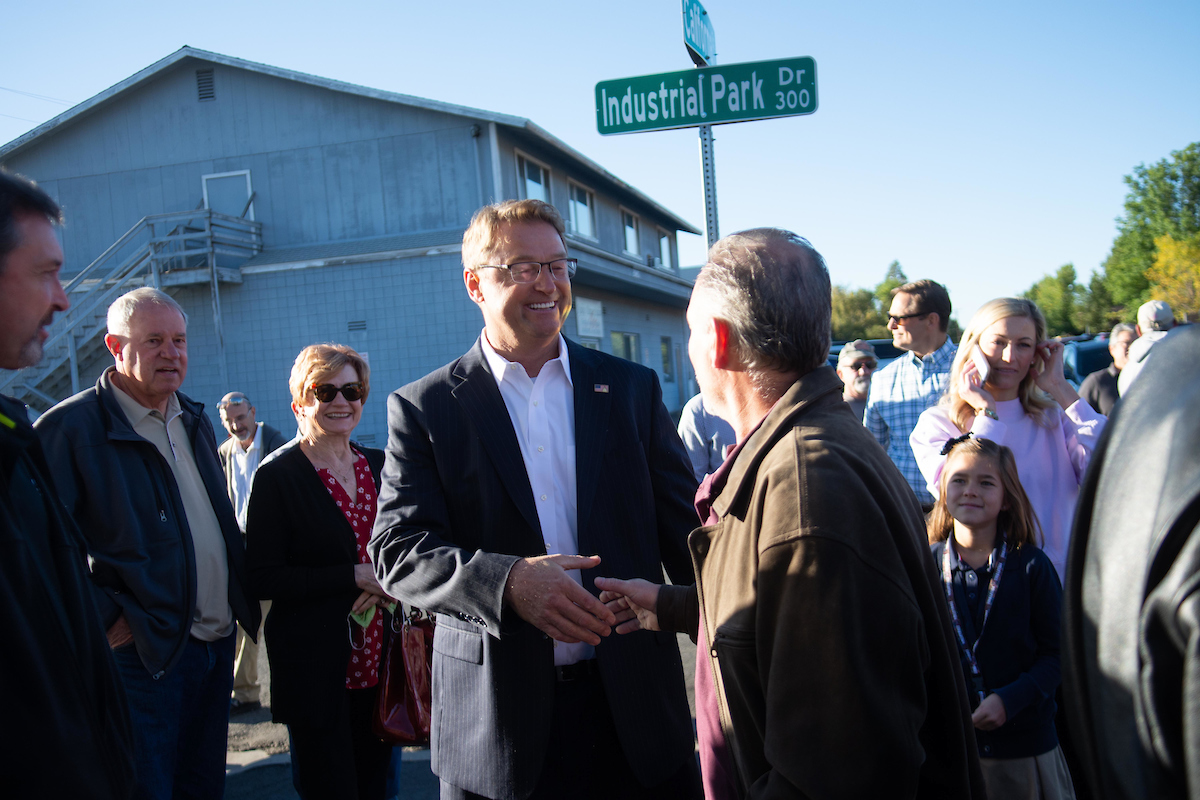 Dean Heller and J.D. Vance have quite a bit in common.

Both men attended private universities — Dean Heller received his degree in business administration from the University of Southern California; J. D. Vance went to law school at Yale. Both men used their brief financial careers to support their political careers — Heller worked as a commercial banking consultant for Bank of America to pay his bills while he started his career as a state assemblyman, while Vance worked as a venture capitalist and a philanthropist, at least on paper, to burnish his professional and political résumé.

The similarities don’t end there.

Both men were, once upon a time, prominent Never Trumpers. Heller spent nine months cagily refusing to divulge who he voted for in the 2016 election in much the same way he now cagily refuses to say out loud who’s president today. Vance’s Hillbilly Elegy, meanwhile, originally published a few months before the 2016 election, supposedly explained the cultural dysfunctions that led poor white Americans to see Donald Trump as their lord and savior (whether it actually does or not depends on whom you ask).

Both men are also now running for statewide office as Republicans — governor, in Dean Heller’s case, while J. D. Vance is running for Senate in Ohio. To succeed, they both need to rebrand themselves, fast.

The problem for both of them is, less than a decade ago, it was largely assumed there were two kinds of Republicans — successful conservative capitalist businessmen and the voters who grudgingly supported them. Sure, some Republican voters might listen to the likes of Father Coughlin, Curtis Howe Springer or Rush Limbaugh, but the businessmen would safely and paternalistically keep conservative rhetoric grounded in political reality while nodding (but not too noticeably!) towards their base.

When conservative capitalist businessmen needed to appeal to a national audience, they’d wear a nice suit, stress the importance of keeping taxes low and regulations business-friendly, advocate for a strong defense of America, moms, and apple pie, and generally leave most social issues alone — think Mitt Romney. If they needed to appeal more to their base, they might, perhaps, openly support segregation, but still stop short of openly supporting the politically unpopular Klan hoods and strange fruit necessary to enforce segregation, in much the same way some people today support the idea of strict immigration controls without supporting the nasty, politically unpopular work required to make immigration controls strict — like, say, chasing unarmed migrants on horseback and whipping them back across the Rio Grande.

(Don’t worry, the migrants were whipped with reins, not whips, so the Border Patrol didn’t violate Reno’s anti-whip ordinance, and the horses have been fired, which solves that problem, at least. Besides, I’m sure there are other, more humane ways to forcibly keep desperate families from moving to a better home than flogging them with leather strips from horseback — like, say, shooting them with beanbag shotguns from all-terrain vehicles. But I digress.)

Of course, groups like the John Birch Society, a conspiratorial organization founded by a retired candy salesman who encouraged members to vocally complain about communist infiltrations in municipal government and school board meetings (the more things change, n’est-ce pas?), were always around. So was the Klan, incidentally, as David Duke has reminded everyone periodically. But even conservative firebrands like William F. Buckley preferred to keep those movements at arm’s length.

There were always some problems with this approach, however.

Sure, few people trust, much less like, angry conspiracy theorists, bloodthirsty racists, or loudly hypocritical Bible thumpers, but nobody really likes conservative businessmen, either. They’re our bosses — or, more often than not, our supervisor’s manager’s great-grandboss, twice removed, depending on who drew the org chart last — and it’s a rare employee who actually likes the person who wields the power to lay off half of a department whenever they need to increase shareholder value by two percent through the next fiscal quarter.

It’s also hard to be politically active without becoming openly contemptuous of most of the people you have to talk to, especially when you’re the sort of person who always has a few million in the bank to fall back on. You don’t have to be involved, after all — why doesn’t anyone understand that you’re doing them a favor, not the other way around, when you offer to serve the public in an elected capacity? This is especially true when absolute losers and deadbeats show up to your events and demand you compel the government to do something on their behalf — you’re clearly doing just fine with the laws as they are, so why don’t they just make better choices like you did?

Even so, it’s not like your average Bircher, Klansman or evangelical was in a position to be picky. They weren’t getting anyone elected, after all — certainly not nationally, anyway — and Democrats largely gave up on even trying to appeal to a few of them by the end of the Vietnam War.

Then, in 2016, Donald Trump proved (for as strong of a definition of “proved” as one can support with a sample size of n equals 1) that it was actually possible to win the White House while speaking like a conservative talk radio show host during sweeps week. Ever since that election, the message from the base has been loud and clear — either their Republican politicians will stand firmly in the fetid trenches with them and rail against communist-socialist propaganda in American schools or whatever else today’s fashionable conspiracy theory du jour might be during public comment, or they can fornicate right off. This especially includes the 10 Republican congressional representatives who had the temerity to vote to impeach Trump after Jan. 6, nine of whom were then rebuked by their state or local parties and four of whom have Trump-endorsed primary challengers.

That’s a problem for Heller and Vance, who both grew accustomed to wealth and connections keeping them safely unmoored from the worst vicissitudes of Republican opinion while they pursued their careers. Now they have to find some way to relate to, and gain favor from, some of the most stubbornly, persistently unlikeable people on the planet — the very same people they sought to rise above and avoid when they enrolled in college.

When you view your audience with thinly veiled contempt but still need something from them, the obvious approach is to embrace your inner H. L. Mencken and give the rubes exactly what you think they want, good and hard — which is exactly what both Heller and Vance are doing.

J. D. Vance, for example, cleaned his Twitter timeline of most (but not quite all) of its anti-Trump content and has since furiously populated his timeline with support for conspiracy theories and white supremacists. He also declared his support for Sen. Josh Hawley’s (R-Missouri) attempted objection to certifying the electoral votes during Jan. 6. More recently, within the span of a single 14-minute interview, he expressed disdain for childless couples and opposed abortion even under the circumstances of rape and incest.

Dean Heller, meanwhile, has been working on improving his routine since he ham-handedly told Trump that “everything you touch turns to gold” on an airport tarmac in Elko (because, see, Elko is full of Trump-supporting gold miners, ha ha, get it?). Since launching his gubernatorial campaign last Monday, he has repeatedly refused to acknowledge who won the last presidential election, and even went so far as to claim in an interview with the Las Vegas Review-Journal that the last time Nevada had a safe, secure election was when he served as secretary of state — presumably this lack of faith extends to the elections he won for congressional representative in 2008, 2010, and his successful senatorial run in 2012.

During his gubernatorial launch party, Heller also claimed that he supported Texas’ anti-abortion law, though he later admitted he didn’t “really know everything that was in that law.” Apparently reading the language of just one law before publicly supporting it is too much to ask from someone seeking to lead the branch of our state government constitutionally responsible for seeing that our laws are faithfully executed.

That’s a shame, as those who actually read the law know that, even if you oppose abortion, allowing anyone to sue anyone else for “aiding,” “abetting,” or “intending” to aid or abet anything, even an abortion, is a recipe for hyperlitigious disaster. Once the novel enforcement mechanism — even if the defendant wins, they don’t get legal fees back, and if they lose, they lose at least $10,000 — is explained to voters, they reflexively oppose it. Meanwhile, supporters of the bill are frantically trying to prevent the first lawsuits authorized by the bill from going forward, lest it reach the Supreme Court and ultimately lead to the overturning of the bill.

Meanwhile, in Heller’s campaign launch ad, he paints himself as a blue-collar worker who welds and fixes his race cars (because, after all, one really gets those fingernails dirty working as a politician for three decades), complains that the police are being defunded (despite the recently unionized Highway Patrol securing a pay raise), and declared violent crime was “exploding” there (even violent crime has steadily decreased over the last five years).

Dean Heller, like J. D. Vance, is trying to give the rubes exactly what he thinks they want — support for Trump’s Big Lie, a promise to prohibit abortion in a state with legal sex work, a plan to increase police funding in a state with unionized police forces and ever-escalating public safety budgets, and a manufactured image of himself as a retired ranchhand-slash-racecar driver-slash-mechanic, instead of the 61-year-old USC business school graduate who worked as a politician from 1990 until he lost for the first time in his political career in 2018.

The worst part is, unlike Vance’s sad, thirsty grasp for 15 more minutes of fame, it just might actually work.