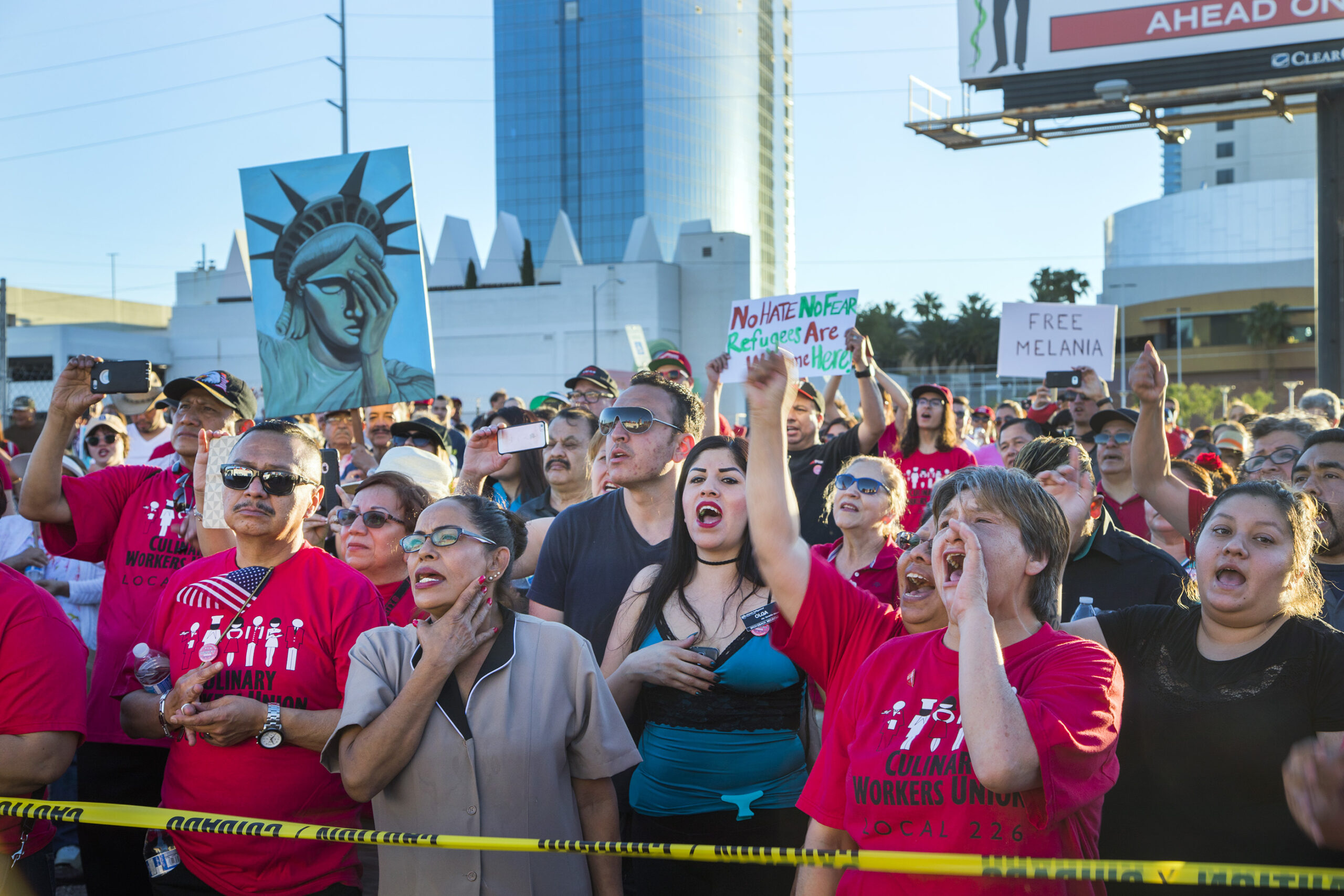 Four Democratic presidential hopefuls again trekked to Las Vegas on Wednesday to answer questions from union workers about how they would bolster national labor oversight and whether they would appoint a union leader as a labor secretary at the third major labor-focused event to be hosted here in the last five months.

The candidates, speaking to Nevada AFL-CIO members at their annual convention at the Flamingo Hotel, largely reiterated promises to bring labor officials into their administrations and lean heavily on them for advice as they craft policies on labor-specific topics as well as on broader issues such as health care and education. The presidential hopefuls also promised to strike Trump administration policies union members say have weakened apprenticeships and hurt federal workers.

The candidates promised to buttress the National Labor Relations Board, which is tasked with enforcing U.S. labor law, to ensure more accountability of employers not following the board’s rulings, as has been the case in a now yearslong battle between the Culinary Union and Station Casinos here. In the last few months, several Democratic presidential candidates have weighed in on the side of the Culinary Union, the politically powerful labor organization known for its organizing prowess, and called on the casino company to come to the bargaining table. (Workers at six Station Casino properties have now voted to unionize.)

Klobuchar, in her response, specifically cited the casino company.

“The third thing — which is the most important and you've seen here with Station Casinos — is putting in much stricter rules for what employers can't do when you're trying to organize,” Klobuchar said.

Castro said that his board appointees would have a background in labor organizing and that he would support legislation that makes it easier for unions to organize, while Booker touted passing legislation that would strengthen unions across the country — including in right-to-work states like Nevada — and said that he would ensure that the Labor Department uses its “teeth” to enforce labor laws. Booker also attributed declining wages to a decline in union membership.

“What we've seen over my lifetime is as union memberships going down, we've seen wages stagnant and for lower income jobs, we've seen wages going down relative to real dollars,” Booker said. “That is unacceptable. We are the nation we are today because of unions, and I will be a union champion as president of the United States.”

Harris promised to ban so-called right to work laws, strengthen the right to strike, ensure U.S. trade policy benefits workers and fight for a $15 an hour wage, among other things.

“I have stood with McDonald’s workers striking for minimum wage benefits — SEIU, AFSCME, the Culinary workers in Vegas — and I will say that for the policies that we are advocating around health care, around teacher pay, around equal pay, around trade, it has been through the conversations that I've had with the members here that we have strengthened our policy,” Harris said.

During her address, Klobuchar lauded Nevada for raising the minimum to $12 an hour and allowing state employees to collectively bargain in the most recent legislative session.

“You're going to be able to go back and tell your members, right? Twenty thousand people can now join unions and bargain from the public sector like the corrections workers that just signed up to do it,” Klobuchar said. “The minimum wage increased to 12 bucks. It's not every time — and I know you've been through not easy times politically — where as leaders in the union, you get to go back and tell your members, ‘Hey, we really got something done.’”

Booker, asked a question several other of his fellow Democratic presidential hopefuls weighed in on at a different Las Vegas labor forum earlier this month, committed to appointing a labor leader as his labor secretary if elected president and said that his other cabinet members would reflect the workers in those agencies. He also promised that labor leaders would be at the table when crafting infrastructure development plans, discussing retirement security and pursuing health care reform.

“Because if you all are not at the table, when we are dealing with the big issues of society, I fear that we will not do as well as we could do and would do when labor is always there and represented,” Booker said.

Harris, who received that question at the forum hosted by AFSCME earlier this month and said then only that she would consult labor leaders in making her decision, went one step further on Wednesday and said she would “absolutely” appoint a labor leader as her labor secretary.

“What a secretary of labor should be responsible for doing is growing the strength of labor and the dignity of labor in America, and that has to be somebody who actually understands how that happens from the ground up,” Harris said. “So the answer is yes.”

Klobuchar also said that she would appoint a labor leader as labor secretary, adding that “I think you have to have someone that understands labor and someone who is going to look out for working people.” Castro didn’t go quite as far, saying that he was committed to appointing as his labor secretary someone who “has been a leader, somebody who has done organizing and believes in organizing, who has a track record of actually getting things done and who will be an ally to the labor movement in our country.”

The four candidates also said that they would overturn the Trump administration’s new industry-run apprenticeship structure, with Booker calling it a “trick to undermine union strength and union influence in the United States” and promising that the country will “become the leader of developed nations” in apprenticeship programs. Castro added that he would have a catalogue on his desk on his first day in office as president with a list of all Trump administration actions to immediately roll back, while Klobuchar said she has a 100-day plan with deadlines for “things you can do short of getting Congress to do something.”

They also promised to protect federal government employees, with Castro noting that when he took office as Housing and Urban Development secretary, the department was in the middle of negotiations with union employees but that they quickly “got it done.” Booker, whose grandmother worked for the federal government, said that he would ensure that federal workers’ wages and benefits are protected and that their contracts are renewed in a timely fashion, while Harris said public service is some of the most “noble work you can perform.”

Castro additionally touted his “Working Families First” plan, which includes a new inheritance tax on heirs that receive more than $2 million and a wealth inequality tax on the top 0.1 percent of Americans, or those with assets in excess of about $40 million, as a strategy to lessen income inequality, while Harris highlighted her plan to give families that are making less than $100,000 a year a tax credit of up to $6,000. Klobuchar suggested taxing trust funds, and Booker pushed his plan to more than double the earned income tax credit.

“This tax cut actually would pay for itself, because when you give working people more money in their pockets, they spend it in the economy,” Booker said.

Speaking with reporters after his address to the union workers, Castro strongly criticized President Donald Trump’s handling of the U.S. economy, noting in particular the president’s ongoing trade war with China. Though he said he hoped a recession is not on the horizon, Castro said an economic downturn in the near future would be no surprise.

“You can’t put somebody as erratic, as lazy and as haphazard as Donald Trump in the Oval Office and not expect that that’s going to catch up to you at some point,” Castro said. “Donald Trump is catching up to the American economy.”

Castro’s remarks were followed by Booker, who said he was one of the most electable candidates in the field, drawing comparisons to former Democratic presidents, such as Bill Clinton and Barack Obama, whose poll numbers were largely overlooked during the early stages of the primary process.

“If you look at the kind of leaders who win in the past, they’re not the people who are polling ahead this far out,” Booker said. “But they were dynamic leaders who were able to energize and inspire the fullness of our base.”

Booker also took a question on a recent $572 million judgment against pharmaceutical giant Johnson & Johnson for its role in the nation’s opioid epidemic, saying he would pursue every available avenue in prosecuting corporate offenders who drove the crisis. That includes possibly piercing the corporate veil, a legal strategy that would bypass limited liability and hold shareholders or corporate directors liable for the conduct of the company.

Klobuchar spoke to reporters twice on Wednesday, including a morning press conference where, flanked by state leaders and activists on the issue of gun violence, she called on Senate Majority Leader Mitch McConnell of Kentucky to move forward on a number of gun regulation measures currently sitting in limbo in the Senate.

That includes one of Klobuchar’s own bills, which aims to close the so-called “boyfriend loophole,” a technicality that prevents firearm restrictions from being placed on men convicted of domestic abuse unless they are married to the victim.

Following her address, Harris spent her short press conference lambasting Trump. Responding to a report from the Washington Post that Trump offered pardons to staffers who might break the law in an effort to expedite construction of a southern border wall — a report Trump has denied via Twitter — Harris called the president “lawless.”

“We have a lawless president. He’s lawless,” Harris said. “You can look at the Mueller report to know that, and you can look at a variety of actions that he has taken, including those statements today.”

She went on to criticize the president’s handling of natural disasters, especially those that have struck Puerto Rico. Responding specifically to a Trump tweet Wednesday that called the island “one of the most corrupt places on earth,” Harris said the remarks were “unbecoming” of the U.S. as a nation.

But the California senator also ducked several questions on her flagging poll numbers, which, after surging following the first televised debate, have dipped back to pre-debate levels. On the subject, Harris said the only poll that matters is Election Day.

Updated 8-29-19 at 11:18 a.m. to include additional details from Minnesota Sen. Amy Klobuchar's speech to the Nevada State AFL-CIO.