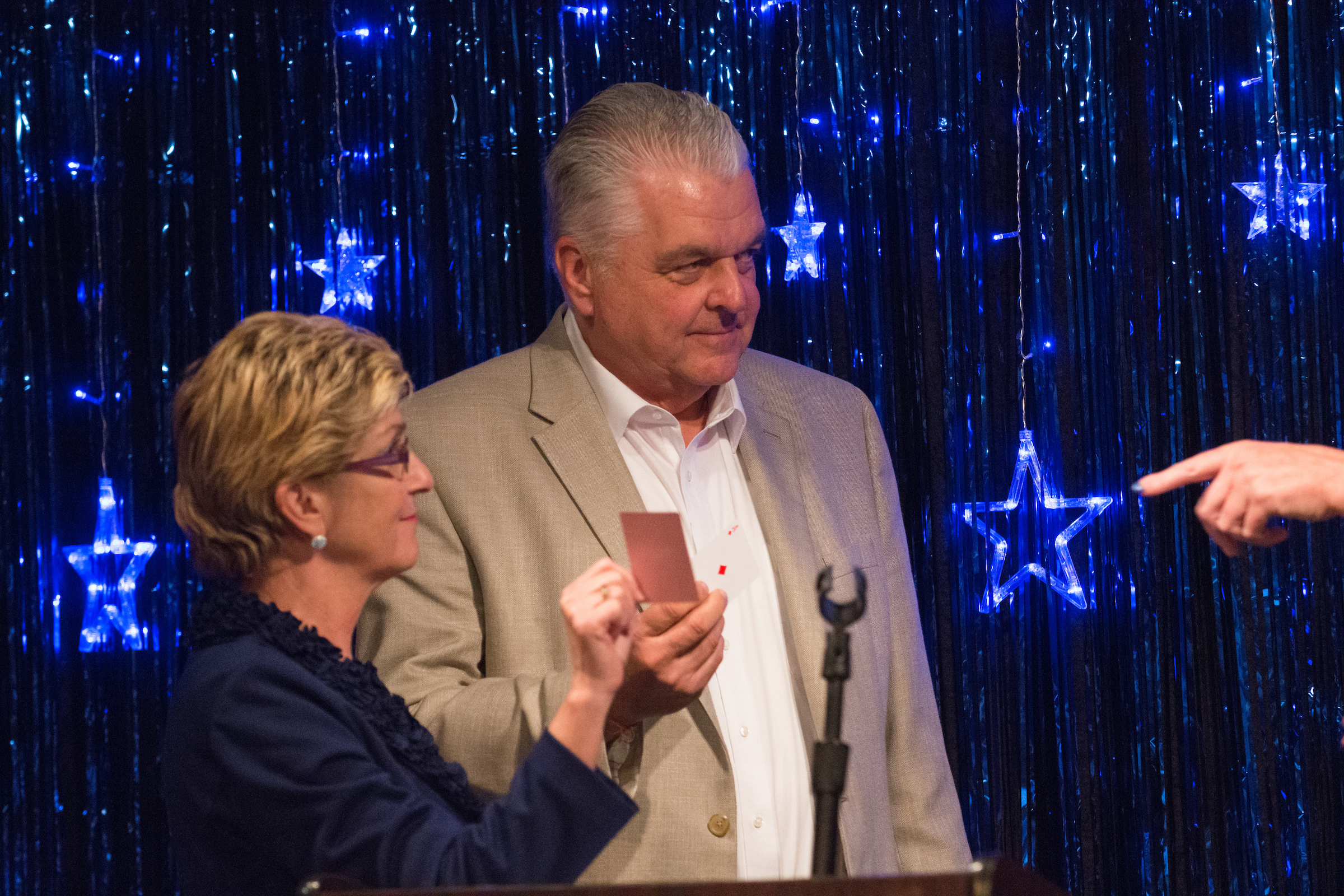 Clark County Commissioners Steve Sisolak and Chris Giunchigliani reported receiving hundreds of thousands of dollars in campaign contributions for their gubernatorial campaigns on and around days the county board met in 2017.

Sisolak reported raising more than $660,000 on the day of, before and after the County Commission met in 2017, according to a review of campaign finance reports by The Nevada Independent. Giunchigliani reported raising just under $200,000 over those same dates.

On at least one occasion, both commissioners received a $10,000 contribution from a major construction company a day after voting to approve a $1.9 million contract with the same firm.

Unlike state lawmakers, who are legally barred from raising funds for a period of 30 days before and after the 120-day legislative session, the members of the Clark County Commission have no prohibition regarding when they can accept campaign donations, including on days the commission meets.

The Clark County Commission, which meets every two weeks, is considered the most powerful local government in Nevada, with the seven elected commissioners afforded wide latitude in decision-making over policies affecting the two million residents of Southern Nevada.

The bulk of the donations came towards the end of the year, after both candidates had announced their intentions to run for office (Sisolak in June and Giunchigliani in October) and in a particularly busy time for fundraising. Combined, Sisolak and Giunchigliani reported raising nearly $290,000 in the days before, after and during the two County Commission meetings held in December.

Sisolak reported raising more than $2.5 million throughout all of 2017, with Giunchigliani raising a little more than $832,000 over the same time period.

Despite the massive hauls reported on and around County Commission meetings for the two candidates, only three examples of donors with business before the commission close to a meeting date emerged in a review of the candidates' 2017 campaign finance reports.

One day after commissioners voted unanimously to approve a $1.9 million contract with Las Vegas Paving Corp., the business reported donating $10,000 each to Giunchigliani and Sisolak. Giunchigliani also received a $1,500 campaign check from GCW, Inc. on the same day as the Dec. 19 commission meeting, where commissioners voted unanimously to enter into a contract with the engineering firm.

Neither contract was controversial, with both appearing on the commission’s consent agenda — a routine practice where non-controversial contracts are placed in one agenda item and voted on as a bloc to save time.

The Dec. 19 meeting had 56 items listed on the consent calendar, including the contract with Las Vegas Paving for rehabilitating parts of Eastern Avenue and Maryland Parkway. Bids for the contract opened on Oct. 30, 2017 and three bids were received: Unicon LLC which bid $2,125,818, Aggregate Industries for $1,925,470, and Las Vegas Paving Corp. which submitted the lowest bid of exactly $1.9 million.

Similarly, the $73,000 contract with GCW Inc. was a supplement for engineering services added to an existing project constructing a levee in rural Logandale, worth slightly more than $1.09 million. The contract was necessary to “re-fly” the project, obtain aerial topography of the site and create a hydraulic model to ensure compliance with the Federal Emergency Management Agency.

Representatives for both candidates said their votes on the agenda items had nothing to do with the contribution.

“Chris has a wide range of donors from all over Nevada,” Giunchigliani spokesman Eric Hyers said in an email. “What people know about Chris is that she always votes her conscience, always does what she believes is best for her constituents and always works to make sure that the taxpayers are getting the best possible outcome.”

“Steve has and always will make decisions based on what is best for Nevadans,” Sisolak spokeswoman Barb Solish said in an email.

Las Vegas Paving has been a long-time contributor to Nevada political campaigns, giving more than $765,000 to candidates in both political parties over the past decade. The $10,000 donation received by both candidates was the largest one-time contribution the company ever gave to either candidate, though. The company has 1,000 employees and has received county contracts before.

Nevada’s primary election is scheduled for June 12 and is one of 32 states holding an election for governor in November.

Updated at 9:00 p.m. on March 11: Corrected number of days which lawmakers are barred from fundraising before and after a legislative session. It's 30 days, not 15.