From Yucca Mountain to Freedom Dividends: A conversation with Andrew Yang 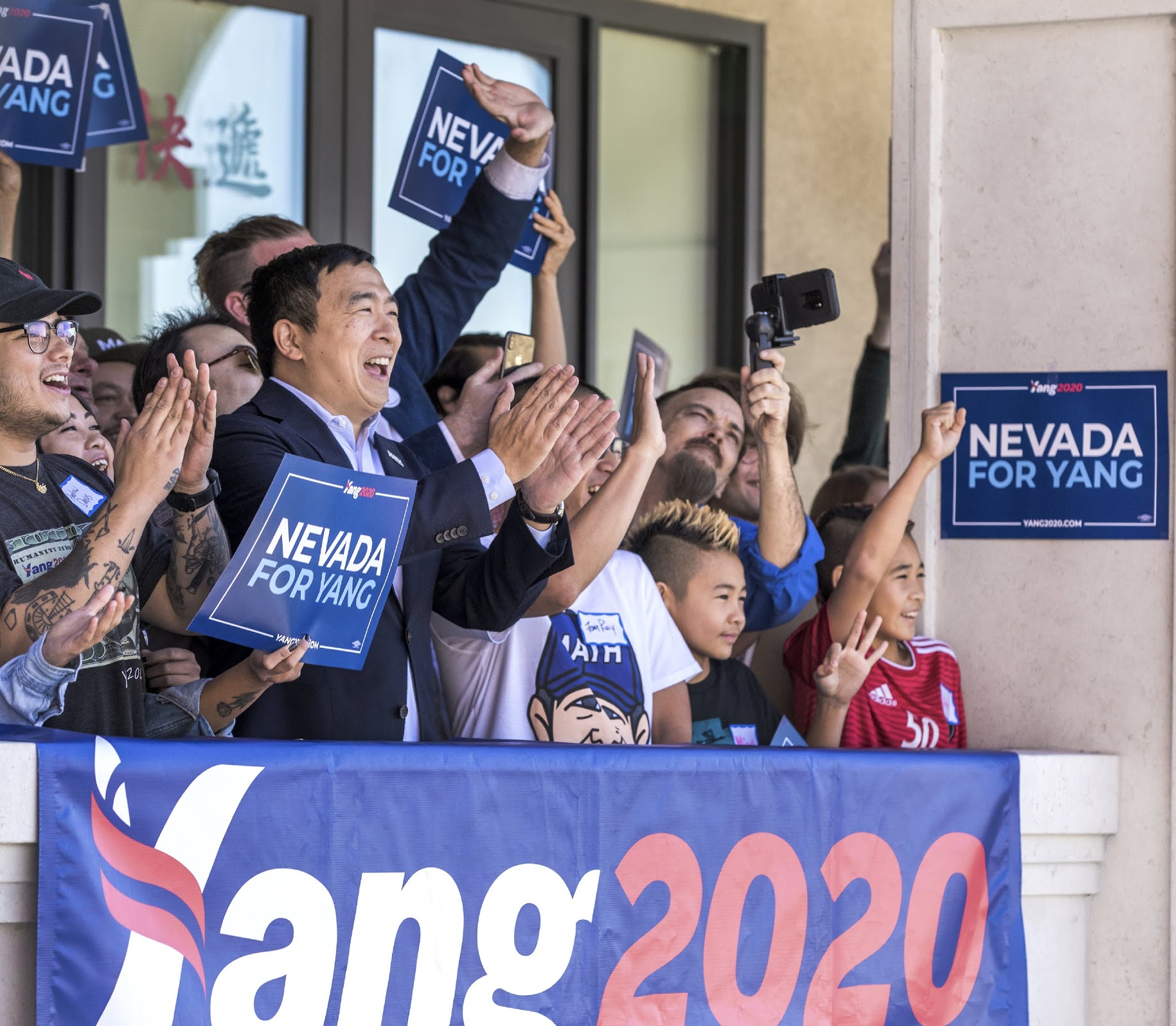 From Massachusetts Sen. Elizabeth Warren to Vermont Sen. Bernie Sanders to former Vice President Joe Biden, there’s a constant refrain come campaign trips to Nevada: Under my administration, there will be no more funding for Yucca Mountain.

It continued — in a way — last week, when entrepreneur and Democratic presidential hopeful Andrew Yang said Nevada “should not be saddled” with nuclear waste, continuing to toe a fine line on the issue of reopening the mothballed nuclear waste repository 80 miles north of Las Vegas.

“I think that nuclear waste is a national problem and should not be saddled with the people here in Nevada. I think that if we're going to move toward sustainable energy resources, we can't rule out nuclear energy, but we should not have nuclear waste repositories be in a particular locality that's not being managed at the government level, and then stick local, state or municipalities with the bill.”

His comments came during an interview for The Nevada Independent’s IndyMatters podcast last week, part of a weekend campaign swing through Las Vegas that also saw Yang visit a progressive forum on Saturday.

There, he drew the ire of the liberal crowd when he repeated that line — that nuclear waste is a national issue — once more, even admitting he didn’t have a “terrific answer” on Yucca Mountain.

Yang has been a vocal proponent of nuclear energy, promising $50 billion in funding for thorium-based reactor technology. Thorium reactors utilize high-temperature molten salts to produce energy and would theoretically eschew many of the downsides to existing uranium reactors, including weaponization and long-term nuclear waste.

“We have to move towards renewable energy sources of all kinds — wind, solar has enormous potential — but if you look at these thorium nuclear reactors, they have the potential to be part of the solution,” Yang said. “Thorium is not intrinsically radioactive, you can't make weapons out of it, it degrades much more quickly — there are many advantages to this next generation type of a reactor.”

A decades-old invention, thorium reactors have for years been singled out as a key to solving American energy issues, especially as those issues have become more acute under the pressures of climate change. Still, existing thorium reactors remain economically expensive and practically challenging. And under Yang’s plan, thorium reactors would only reach the energy grid in 2027.

Yang also spoke at length about his “freedom dividend” — a form of universal basic income (UBI) that would give $1,000 to every adult in the U.S. — and how it might address the proliferation of A.I. and other forms of automation in the American workplace. Yang said those effects have been especially concentrated in Nevada, which he has long called “ground zero” for automation.

“The major industries here in the state are retail, gaming, call centers, transportation, hospitality -- things that, frankly, are very very subject to automation,” Yang said. “It's why you are the number one ranked state, and it's happening before our eyes.”

Yang said his plan for UBI would have an outsized impact among the poorest Americans, for whom $12,000 represents a massive raise in yearly income. Even so, the plan wouldn’t come without strings attached.

“I would be the last person that would ever try and take anything away from Americans,” Yang said. “The Freedom Dividend would be universal and opt-in, but if you do decide to opt-in, you would be choosing to forego certain cash and cash-like benefits from some existing programs.”

Yang clarified that recipients of the dividend wouldn’t lose access to programs like Medicare, Medicaid or housing assistance, though they might lose the ability to opt-in to programs such as SNAP — formerly food stamps — should they also accept the dividend.

Critics of his plan have also taken aim at the funding method: a proposed value-added tax or VAT. A kind of sales tax prevalent in Europe, critics charge that VAT is a regressive tax, or a tax paid disproportionately by those at the bottom end of the income ladder.

Yang countered that his VAT would be tailored, aiming more at “yachts” than “diapers or milk.”

“How can you have a system that allows a trillion-dollar company like Amazon to pay less in taxes than you or me or anyone listening to this?” Yang said. “We have to put a mechanism in place that actually gets us our fair share of every Amazon sale, every Facebook ad, every robot truck mile, which would generate hundreds of billions in new revenue.”

Buoyed by the internet and the #YangGang, an energized following of Yang devotees plastering memes across Twitter and Reddit, the entrepreneur-turned-candidate has qualified for both of the last two Democratic debates — debates that were often criticized by the handful of remaining small campaigns as an unfair winnowing of the 2020 field with unreasonably high thresholds.

Yet Yang has continued to meet those thresholds, even as they’ve steadily increased through the summer and into the fall. Yang’s national polling average of 2.6 percentage points — though down from an early-October peak of 3.8 points — still puts him ahead of high-profile Democratic legislators, including Minnesota Sen. Amy Klobuchar, former Texas Congressman Beto O’Rourke and New Jersey Sen. Cory Booker.

With those polls has come a burst of successful fundraising. In the third quarter, his campaign announced it had raised more than $10 million, a sum nearly double that of Cory Booker (who raised at least $6 million) and nearing the haul of California Sen. Kamala Harris ($11.6 million).

This episode of IndyMatters was the second in a series of interviews with Democratic candidates for president. Listen to the first episode, our interview with South Bend, Indiana Mayor Pete Buttigieg here. You can also read the story here.