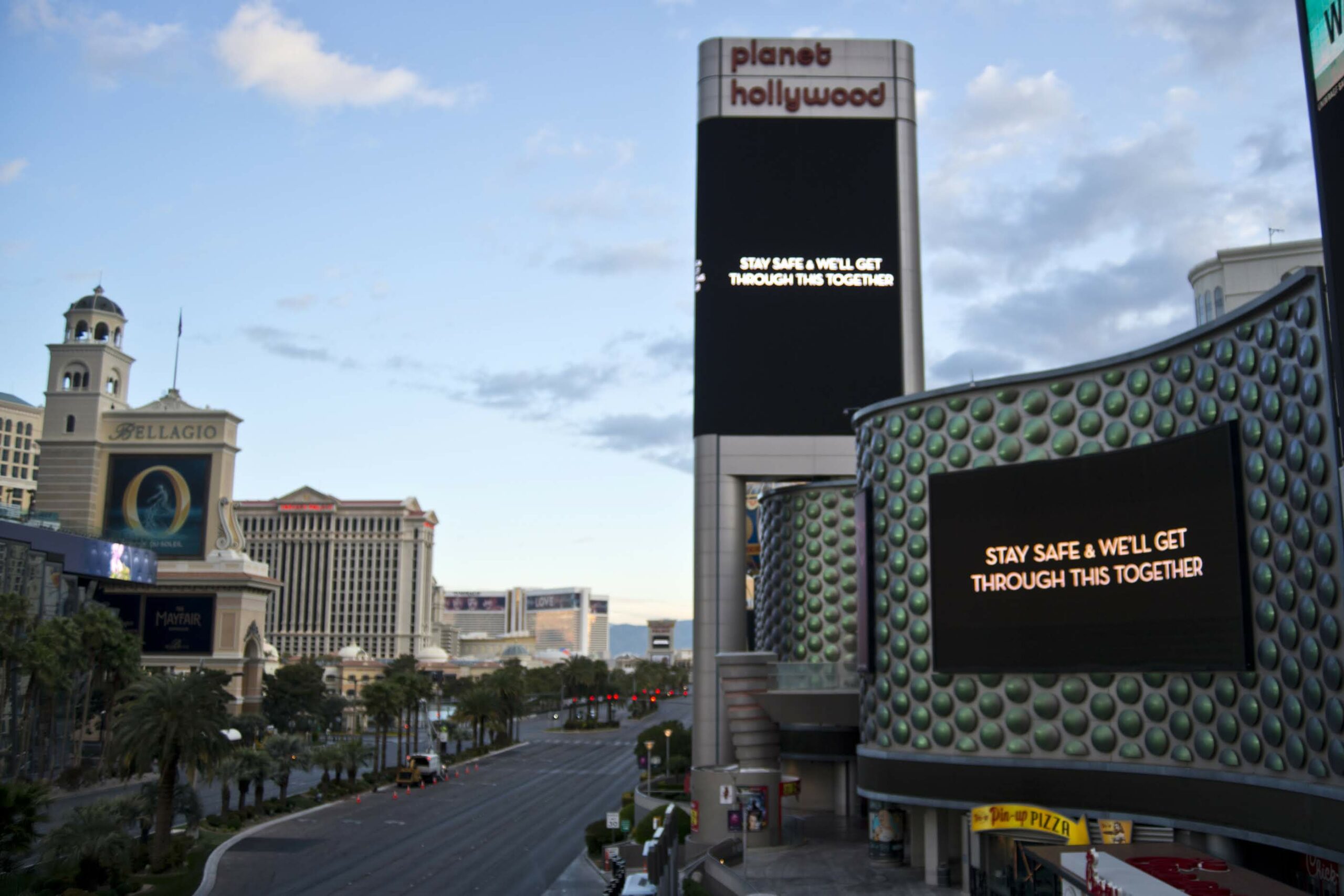 Five months ago, the COVID-19 virus spurred widespread business shutdowns as infections began spreading nationwide, taking a disproportionate toll on communities of color, which are overrepresented in rates of infection, hospitalization and death.

Nevada is no exception.

"For many families, the worst impacts of the 2007-2009 Great Recession were not felt until years later," the report reads. "Recovery plans must account for the immediate impacts and the long-term nature of the crisis and recovery and the underlying social and economic conditions that have made the pandemic so much more devastating for communities of color."

The report proposes several recommendations to address challenges — some originating from the pandemic and others already existing and exacerbated by the coronavirus— faced by communities of color. This includes expanded access to COVID-19 testing and treatment, creating a task force within Nevada's COVID-19 response team to focus on their needs and restoring and prioritizing funds for higher education and health care programs to increase long-term economic opportunities and access to affordable health services.

As a result of the disproportionate economic burdens, the Guinn Center, a nonprofit and nonpartisan research and policy analysis center, also identified these populations as more vulnerable to evictions as moratoria lift, enhanced unemployment benefits expire and family savings are depleted.

Earlier this summer, the Nevada Legislature passed a measure during the 32nd Special Session declaring racism as a public health crisis and pledged to make a greater effort to address racism in the next legislative session.

The report referenced the Legislature’s acknowledgment as a steppingstone to improve the concerning conditions racially and ethnically diverse populations face.

The Guinn Center recommends that decision-makers address underlying disparities as well as the immediate and long term effects of the pandemic on communities of color to avoid lasting reverberations similar to those seen in the Great Recession, when many communities of color faced worse hardships after the recession than during it.

For immediate solutions, the center proposes that officials prioritize communities of color for COVID-19 testing and treatments, including the future vaccine, in part because they are more likely to be essential workers and have increased exposure to the virus.

Expanding access to these resources is also vital as many marginalized communities, particularly the state's 27 American Indian/Alaska Native communities, did not have access in the beginning of the pandemic, according to the report.

The state started playing catch up in expanding access to COVID-19 resources for the Latino population after cases began to affect the community disproportionately. Officials have increased testing sites in Latino neighborhoods across Southern Nevada and hired more bilingual disease investigators.

The center also recommends that Nevada follow other states and use funding from the CARES Act to create an independent task force or a subcommittee within Nevada's existing COVID-19 response team that focuses specifically on the needs of communities of color during the pandemic.

Alternatively, this concentration could be handed to the Nevada Office of Minority Health and Equity, the report says, to further investigate inequity between populations in health issues such as access to affordable medication and health insurance. Guinn suggests that the office look at forthcoming results from legislative studies on ways to lower the cost of prescription drugs and possible designs for statewide public health care insurance.

In response to long-term impacts of the pandemic on communities of color, the center proposes restoring funding to higher education and health care programs, two areas that took more than $100 million in cuts each during the special session over the summer that addressed a $1.2 billion deficit.

Short-term training and educational programs are key to supporting workers who have lost their jobs in the pandemic, according to the report, and many of the furloughed workers are people of color who make up a significant portion of the employees in industries that have experienced the brunt of shutdowns and drops in business.

Programs such as the College of Southern Nevada's Workforce Response/ReHIRE Centers across the Las Vegas Valley will help furloughed workers learn new skills and have new job opportunities, the report states. The CSN program will include more than 20 accelerated degree programs in growing industries with high wages and nine audit programs, or classes that do not have credit for a degree, for those with limited proficiency in English.

"Community colleges are the entry point for training and educational opportunities for many people of color, including workers who have been displaced following business closures and a decline in tourism. Reductions in Nevada’s higher education budget could hinder the ability of community colleges to provide high-quality, accelerated training programs and educational courses that will help dislocated workers upskill and find employment in a timely manner," the report reads.

Such programs will likely be affected by the $135 million cut to the Nevada System of Higher Education, the entity that oversees the state's public universities. Still, the report emphasizes that workforce development programs and educational opportunities should be a priority and affordability and access to these programs for people of color is critical.

The center further recommends that lawmakers restore the $233 million cut to health care budgets made during the special session by increasing taxes on existing sources of revenue, finding new funds or rerouting funds from other areas.

"Given the health impacts of COVID-19 on communities of color, reductions in health care spending (and associated services and programs) could disproportionately affect Nevada’s diverse communities and further challenge their access to prevention and treatment of COVID-19, as well as other illnesses," the report states.

The pandemic has created an economic crisis of unmatched magnitude since the Great Recession, and Nevada’s 30 percent unemployment rate in April made U.S. history as the highest recorded rate.

The sweeping business shutdown ordered in March was a catalyst to widespread furloughs and unemployment, which overloaded and backlogged the state’s unemployment claims system.

Latinos experienced higher rates of unemployment, followed by African Americans, across the country as of June 2020, according to data from the Bureau of Labor Statistics cited in the Guinn Center report. The same was true during the Great Recession for the two racial and ethnic groups in Nevada.

“These inequalities are not new – the distribution of wealth, income, and education in Nevada and in the country has long been stratified by race and ethnicity,” states the report.

While Asian and white Nevadans have long represented the highest rate of education attainment across the state, Latinos and American Indians account for the lowest rates, with less than 12 percent of adults from both groups earning a bachelor’s degree as of 2018.

The report also correlates education levels to the overrepresentation of people of color in low wage sectors as frontline workers who face a double-edged sword — keeping their jobs and income amid an economic crisis but risk exposing themselves to the virus at work.

Nevada’s hardest hit labor sectors are identified in the report as retail, tourism and gaming, including accommodation and food services, all of which combined employ more than 500,000 people and represent 37 percent of the state’s employment.

The accommodation and food services sector accounted for more than one-third of all unemployment claims in the state as of July 2020, disproportionately affecting the overrepresented workers.

The Guinn Center report states that Latinos account for 28 percent of employment in the state, with 26 percent of those workers employed in frontline industries.

While frontline workers take on the exposure risk to the virus, 60 percent of adults with at least a bachelor’s degree work in jobs that can be done remotely, the report stated, citing data from the Pew Research Center. That’s compared to 22 percent of workers who did not attend college.

Parallel to the education attainment rates, white and Asian Nevadans are more likely to be able to work from home as compared to other racial and ethnic groups.

A Guinn Center and COVID-19 Eviction Defense Project report in July found that more than 300,000 Nevadans would struggle to pay rent by September, a burden that racially and ethnically diverse populations are also specifically more vulnerable to.

These populations are more likely to be renters and are disproportionately cost-burdened, meaning that more than half of their income is spent on housing, putting community members at greater risk during an economic crisis.

About 44 percent of households in Nevada are rented, with diverse populations more likely to rent than to own their homes. White and Asian Nevadans have the highest rates of home ownership while African American, Native American and Latino Nevadans make up the lowest rates of ownership.

The Guinn Center report also points to the shortage of affordable rental homes in Nevada available to extremely low income households. The shortage creates renters who are cost-burdened.

Many of these households were cost-burdened before the pandemic hit, which has only exacerbated the issue through job losses and furloughs, which means even less income and reduced ability to make rent payments.

“Analysts predict that when extended benefit programs end and rent moratoria are lifted, many families of color in Nevada may find themselves at risk of eviction,” states the report.